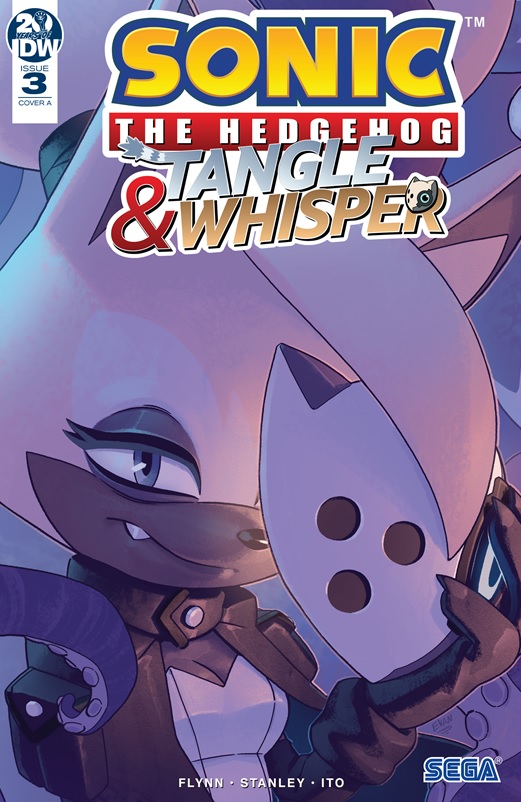 We’re back with another issue of the GOOD Sonic series!  Okay, that’s a bit harsh as the main Sonic book has been fine if overly repetitive, but there’s zero doubt as to which one of these I look more forward to reading when they come out because in the scant few issues we’ve gotten so far, they’ve given these two a lot of characterization and pathos which I find WAY more interesting than yet another zombie drama.  With only two issues left to go (they REALLY need to make this a regular book once their done with the mini-series!), does this offshoot of the new era of Sonic Comics continue to impress?  Let’s find out!!

The issue begins with Whisper finally telling us about her TRAGIC BACKSTORY which involves her former mercenary group.  Those were the good ol’ days where committing war crimes was an activity best shared with friends!  Hey, they’re the one’s calling themselves mercenaries and remember that Mimic had that giant knife in the first issue!  These guys must have gotten up to some SERIOUS BUSINESS!

Now if you’ve been reading the issues up to this point AND you have a cursory knowledge of revenge stories, then you can probably see where this is going.  This team of mercenaries known as the Diamond Cutters worked together to disrupt Eggman’s plans, but then there was the one mission that went wrong where all but two of them died; Whisper and Mimic.  I’m actually a bit unclear on what the mission was as we seem to get the flashback in media res, but what’s important is that Mimic betrayed them all and sent the three members of the team who weren’t on lookout to go into a room filled with Shadow Bots (seriously) that presumably then tore them limb from limb.  Apparently this is why Whisper gave Shadow the mean look in issue 9 which is a bit disappointing as I was hoping that the REAL Shadow did something instead of just looking like the robots that murdered her friends, but at least they bothered to remember that dangling plot point and perhaps there will be more to this if Shadow ever finds out that Eggman made murder bots in his brooding image.

Apparently Mimic didn’t think far enough to include Whisper in this plan as she manages to get away from her vantage point that’s FAR from the bloody carnage, and from that day forward she worked alone (except for the Wisps) to destroy Eggman and hopefully put a bullet right between Mimic’s shape shifting eyes!  Now admittedly this plot thread is a bit clichéd and hokey as it’s one of like five standard revenge backstories (I’m pretty sure this was the plot of X-Men Origins: Wolverine) but what ultimately sells it are Tangle and Whisper themselves; the former hearing this story for the first time and the latter telling it for the first time.  Considering how restrictive Sonic comics can often feel when it comes to fleshing out and laying bare the flaws of its characters (both in the original Archie series and this new one from IDW), it’s refreshing that these two characters can be so frank about their feelings and the writers have done a great job of building Whisper’s character up to this pivotal moment.  The entire issue is dedicated to this.  There is no real action outside of brief snippets in the backstory, and the characters don’t really go anywhere or plan anything throughout the issue; it’s just Tangle trying to help Whisper with her trauma so that they can be better prepared to stop Mimic once and for all.  Compare this to the Sonic books which have required at least one repetitive zombie action set piece over the last five or so issues, and nothing in that outside of MAYBE the death of Charmy Bee has had even a fraction of the emotional resonance as this one issue has! 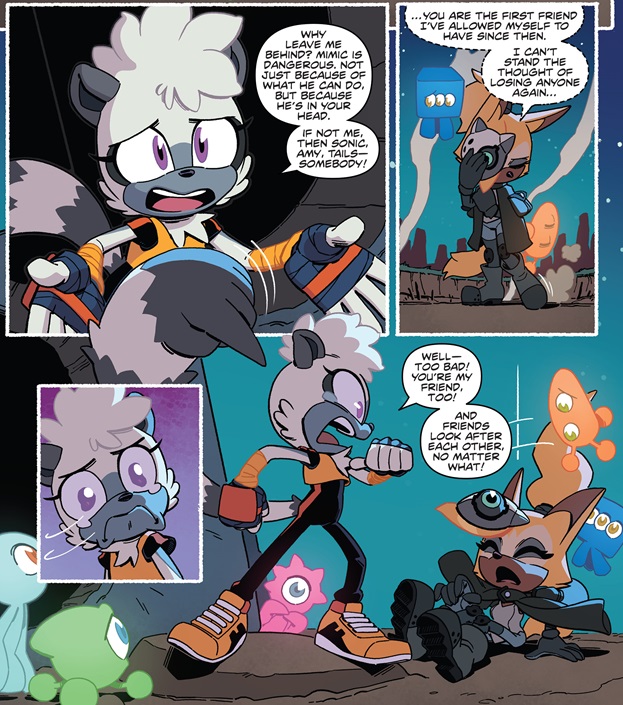 After their little heart to heart, they agree to work together once again to take out Mimic once and for all.  The next morning Mimic visits the explosion site to report his victory to Eggman, but the mustachioed megalomaniac wants a corpse before Mimic returns; otherwise he’ll have to fill in the role himself.  Mimic, clearly frustrated and a little bit frightened, continues to look for any sort of remains when he stumbles upon a message from Tangle & Whisper calling him out for one last confrontation.  And so the issue ends with Mimic letting Eggman know of the situation and requesting enough firepower to obliterate those two once and for all; setting up a fight to end all fights for the final issue of the mini-series!

The issue didn’t cover anything that we couldn’t have already guessed, but it was cathartic to see it all play out and to see these characters react to these revelations.  If the next issue really is the last one we’ll have that focuses on these two characters then I will certainly be disappointed, but I’m excited to see what they do to finish this arc and bring Whisper’s tragic backstory to a satisfying conclusion.  Just don’t put any zombies in it!  I’M DONE WITH THE ZOMBIES!!