We’re back with another chapter in Twilight’s Saga to become the Princess of Friendship!  After last week’s summit that had mixed results, she’s trying once again to prove her political prowess by inviting Royalty from a reclusive kingdom to the city of Ponyville!  So is this going to be a theme this season?  Is the show going to be the adventures of The Princess of Friendship trying to navigate the complicated world of Pony politics?  Equestrian House of Cards if you will?  I’m totally up for it if that’s the case!  Now the last episode was pretty heavily flawed, what with Spike continuing to be short shrifted by the writers, but this episode will at least have the benefit of Twilight not being unconscious for the majority of the running time.  Can she do a better job than Spike did?  Will her presence make this episode all the more enjoyable?  Let’s find out!!

The episode begins with the Mane 6 getting things ready for the diplomatic visit and Twilight stressing out over it.  Okay, so right off the bat I guess she doesn’t know what the heck she’s doing!  That or she’s still having trouble managing the pressures of being a Princess. 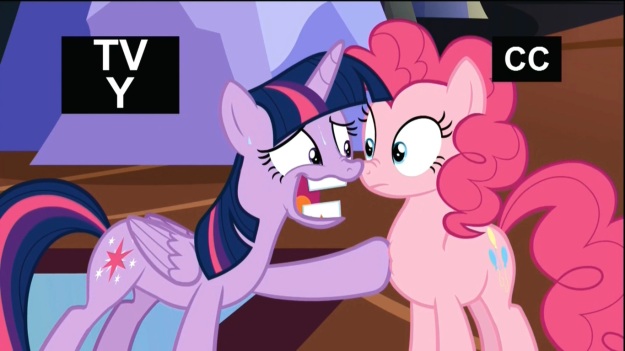 “The Princess of Friendship does NOT get nervous before a diplomatic meeting, right?  RIGHT!?”     “Uh… sure Twilight.  Whatever you say.”

END_OF_DOCUMENT_TOKEN_TO_BE_REPLACED

We are smack dab in the middle of the summer blockbuster boom-a-thon where you can’t chuck a rock without it exploding and narrowly avoiding a recognizable character from a long running franchise.  Who knows?  Maybe the movie going public is ready for something other than dinosaurs and superheroes for about a week or so and this might just fill that necessary niche.  No wait, they released it the same day as Inside Out.  You’re telling me that this movie, from the director of a Carlos Mencia vehicle (Our Family Wedding), is trying to go up against a Pixar film!?  If ANY movie had the balls to go up against the Mouse House, then this is either a film they just want to dump in theaters to get it over with, or something REALLY special that they are confident everyone will take notice of.  Before my pessimism overwhelms you all, it might just fall into the latter category considering the very solid trailers and the fact that it was produced by Forest Whitaker (who was actually in Our Family Wedding) and Pharrell Williams who was also responsible for the soundtrack.  Well it HAS to be better than Mac and Devin go to High School at least… right?  Anyway, the movie is primary about Malcolm who is a high school student in Los Angeles with a 4.0 GPA and wants to get into Harvard.  Not only that, but he’s also a huge nerd for nineties hip-hop and its aesthetic (just look at his flat top) which makes him an even more obvious target for bullying.  One day, he ends up going to a drug dealer’s party which gets raided by the cops and he barely manages to escape with his friends and the love interest he was chasing after in the party.  The next day at school though, he finds that the drug dealer managed to sneak a big ol’ bag of dope into his back pack and he has a bunch of angry mother fuckers looking for it.  As circumstances begin to snowball, he and friends try to do whatever they can to get rid of the drugs without getting shot or thrown in jail.

“So is this one of those life changing adventures where I learn a lot about myself along the way?”     “You watch too many movies punk.  JUST GIVE US THE DAMN DRUGS!!!”

END_OF_DOCUMENT_TOKEN_TO_BE_REPLACED

We’re back with another episode of Syndication is Magic!  After reaching the 100th episode milestone last week (seriously; if this show is huge on a no name channel, imagine how big it’ll be if Cartoon Network picked it up!?) we seem to be heading back into business as usual for the season.  While we have gotten some highlights like the season premiere and the 100th episode, things haven’t been as good as they should be for the series what with a bunch of filler episodes and unrealized potential.  Not only does that have this episode going against it, but it’s another Spike episode which tend to be a mixed bag for me.  Still, the last time he was the focus of the story was the very good Equestria Games, so maybe the writers have figured out how to write this character well and we’ll get another solid episode this time around.  Let’s find out!!

The episode begins in Canterlot where the four princesses are holding a summit for the entirety of Equestria.  I guess that means everyone’s going to put on a good show of peace, get a bunch of photo-ops, eat lots of fancy food, and accomplish absolutely nothing.

END_OF_DOCUMENT_TOKEN_TO_BE_REPLACED

Welcome back to another episode of the most critically panned revival of a beloved nineties anime until the new Dragon Ball show gets released!  What?  Am I the only one expecting that?  Anyway, the last episode of Sailor Moon Crystal was pretty shaky but ended up going out on a high note and leaving us with a lot of expectations of where this episode will go.  With Chibi-Usa going full villain last time around, will we get the epic punch up between mother and daughter that we’ve all been waiting for, or will we be let down again by one of the most uneven anime in history!?  Let’s find out!!

The episode begins with everyone gathering in the middle of the wasteland to discover that this new adversary is none other than an all grown up Chibi-Usa (calling herself Black Lady) with a massive chip on her shoulder.

“Does this mean I can tap that?”

END_OF_DOCUMENT_TOKEN_TO_BE_REPLACED

You can find out more about the fighting game being developed by Mane6 here!

The Reviewers Unite!
Create a free website or blog at WordPress.com.