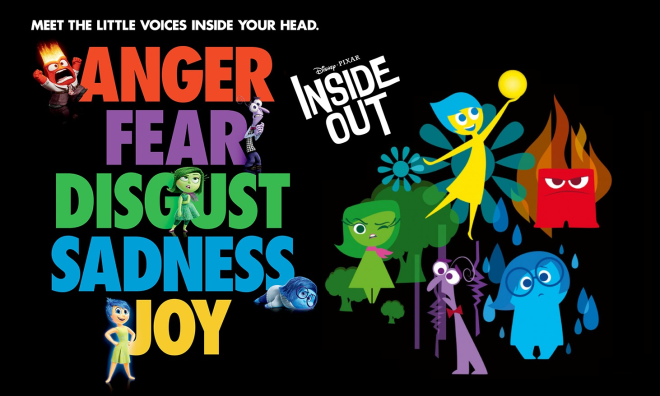 Is it too late for the Herman’s Head jokes?  It is?  Okay then.  Anyway, we once again find ourselves with another film from the world’s most harshly criticized 9.5 out of 10 studio.  It’s hard to deny that the Pixar brand has become somewhat tarnished in recent years what with Cars 2 being a critical bomb and Brave not living up to expectations for many.  That and the fact that they’re gonna start cranking out sequels left and right for the next decade.  Still, you can’t deny that Pixar on a bad day is still gonna be better than a lot of other studios on a good day.  So where does Inside Out fall on the Pixar scale?  Eh… we’ll get to that in a minute.  First, what is this movie about?

Inside out is about the brain of an eleven year old girl named Riley.  Inside of her head (and everyone else’s as we find out throughout the movie) are five key emotions that control everything she feels; Joy, Sadness, Anger, Disgust, and Fear played by Amy Poehler, Phyllis Smith, Lewis Black, Mindy Kaling, and Bill Hader respectively.  Things are going well for them through Riley’s adolescence (especially joy) until her family moves from her childhood home to a dumpy apartment in San Francisco.  This causes some unrest between the emotions as they try to figure out how to deal with these new changes and it especially cause tensions between Joy and Sadness, the former wanting Riley to stay positive about this experience, and the latter (kinda unknowingly) beginning to assert herself more.  Shenanigans ensue and it eventually leads to Joy and Sorrow being launched out of the command center and into the outer regions of Riley’s consciousness along with some key memories that neither one of them want Riley to lose.  So the movie basically becomes a journey for these two to hash out their differences while the remaining emotions (Anger, Disgust, and Fear) try to compensate as best they can for the missing two.

What this movie does right is play with the idea of personifying Riley’s emotions.  The Herman’s Head comparisons aren’t unfounded, and while I haven’t seen a lot of that show, this movie is certainly hitting those same beats.  What this movie has that Herman’s Head DOESN’T have is good writing (sorry, but that show was CHEESE-TASTIC) as well as stunning animation.  Every one of the emotions are wonderfully realized, animate fluidly and have their own little ticks that give them each a unique flavor and make them eminently enjoyable to watch on screen.  If you couldn’t guess already, my favorite was definitely the little man with a bad temper played by everyone’s favorite hilarious curmudgeon!

Unfortunately, the majority of the film isn’t about the five of them working together to help Riley through hard times, and instead (as I mentioned earlier) is about Sadness and Joy going on a road trip through this little girl’s brain and the less than stellar concepts they come up for it.  For such a simple goal (go from point A to point B) they have to throw in so many roadblocks to keep these two away from their destination just so they can come in in the nick of time to save Riley.

Whenever they would cut to these two trying to simply walk from one place to another and fail spectacularly, I just ended up tuning out because it felt like padding.  Let’s go through the long term memory for a bit.  Oh look!  It’s Imagination Land!  Now let’s see where her dreams come from.  Oh no!  We have to go to the subconscious!  Just delays upon delays to keep these two away and the scenes aren’t nearly as entertaining as what the other three are doing up in the command center.  My problem here is similar to my problem with Jurassic World, in that the concept and ideas they come up with (especially early) on are far more interesting that the stuff that feels like it needs to be there to make it a movie.  I would have loved this to be more of a bottle film where the five emotions start to argue more and more over what to do to get Riley through this big change in her life, but instead we just copy the central conflict of the first Toy Story (and the second and third Toy Story now that I think about it) while throwing in a pink elephant to spice things up and fill the sidekick quota.

It’s kind of funny how they take something so personal (the struggles of young girl’s emotions as a big change happens in her life) and fills it with hollow wiz bang action scenes.  They are literally turning an internal conflict into an external one that as far as I can tell is purely metaphorical.  That’s another thing; nothing outside of the command center seems to have much weight.  The most we get is a dream that the three of them (Joy, Sadness, and Bing Bong, the long forgotten imaginary friend) interrupt but other than that the massive amount of damage that happens is either self-inflicted by Riley (or I guess by the mismanagement of the three remaining emotions) or they have zero impact on Riley.  While Osmosis Jones is by no means a classic, at least in that movie when the characters were doing crazy things, we saw an impact in the real world to know that they were more than just metaphorical constructs.  These can work in some cases (they certainly do in the context of the command center), but it robs the action of any impact and just leaves it feeling inconsequential.

Even though about fifty percent of this movie didn’t work for me, it wasn’t terribly done and there were moments of creativity of here and there that were genuine highlights of the movie.  The other fifty percent so did in fact work quite well, especially once we get to the heart of the movie.  While Joy and Sadness’s conflict takes a while to become more than just Odd Couple shtick, when it does get to the heart of the matter it really gives that Pixar emotional gut punch.  I spent most of the movie questioning how they were gonna turn Sadness around (who spent most of the movie whining and trying to turn Riley’s memories into sad ones) and they end up pulling it off with fantastic results.  The story is ultimately about having balance in your life and not letting any single emotion (especially sadness) stay bottled up for two long or else it throws everything in havoc.  The scene at the end with we see Sadness’s deft hand at work in helping Riley is one of the sweeter moments in Pixar’s library and the ending really does nail the idea of growing up and becoming a more complex and emotionally fulfilled person.

It’s kind of disappointing that the movie itself felt the need to cover up its quieter moments with meaningless distractions the way that Joy tried to keep Sadness from doing what needs to be done.  By no means is the ENTIRE movie a series of action set pieces, but I felt this movie would have been much better if there had been ZERO action scenes.  I guess even Pixar can’t get away with making an animated feature without the occasional roller coaster which is a shame considering how much I liked every scene where they were trying to help Riley get through her day.  It may not be worth seeing in a theater considering the actions scenes don’t really impress, but the scenes that work make it absolutely worth watching.  So where does it fall in the Pixar spectrum?  It’s pretty much smack dab in the middle.  It’s by no means their worst films (I still think that the cars movies are woefully subpar for them) but its unevenness keeps it from being one of their better films.  Pixar’s upcoming slate doesn’t fill me with much hope considering most of them are either sequels to what will most certainly be better films and new stories that don’t seem all that impressive (they showed a trailer for The Good Dinosaur and it did not fill me with hope).  Who knows if the studio’s best days are behind them. At least Inside Out manages to remind us why they were the masters of western animation for so long, even if it does occasionally show us that they aren’t the neigh flawless filmmakers they once were.

3 thoughts on “Cinema Dispatch: Inside Out”