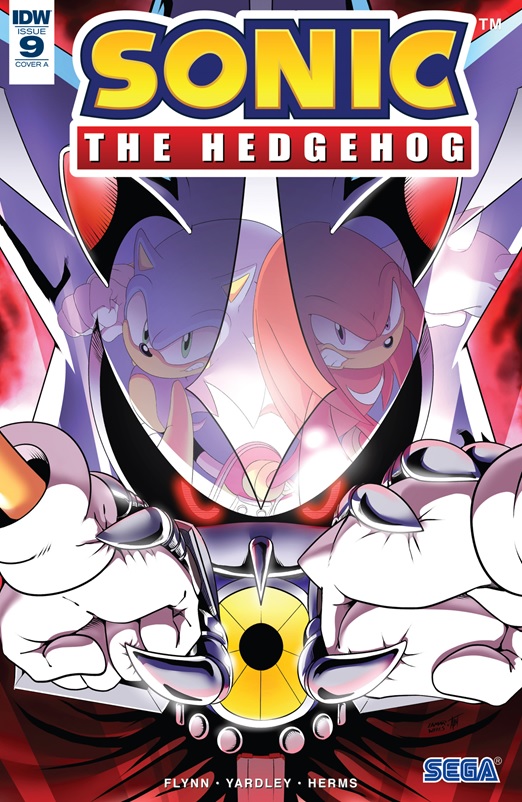 We’re back with another issue of The Mobius Dozen where our heroes now know what they heck they need to do but may not be fully aware of what they’re up against!  Does Neo Metal Sonic have something up his robo-sleeve that even our heroes won’t’ be able to overcome?  Let’s find out!!  The issue begins on a slightly different note than usual as we start with Neo Metal Sonic giving his expositional villain speech (to no one in particular) which catches us up to speed on what he’s been up to while Sonic and The Resistance (I’m CERTAIN they’re gonna call themselves Sonic’s Forces at some point) were off trying to uncover the most obvious evil plot imaginable.  In case you didn’t know already, Neo Metal Sonic flew his ship to Angel Island… and that’s it.  No one was guarding the Master Emerald that resides on there, and he just… took it and put it in a giant cage that he now sits on.  Kinda dropped the ball there, didn’t you Knuckles?  I’ll give the book credit for changing things up a bit here as this early scene gives Neo Metal Sonic a modicum of presence and a slight amount of menace, but then I also question how perfect of an artificial being he is considering he starts four sentences IN A ROW with “I have”.  Sure I’m barely a writer myself, but at least I know enough to check for that kind of repetition!

Anyway, while Neo Metal Sonic is sitting on the Emerald Throne, Sonic’s Forces have all gathered together (or at least the named characters in The Resistance) and are planning on how to take back the island and the Master Emerald.  It’s a brilliant plan actually!  They go to the island, they beat up robots, and then profit!  Okay, it’s a BIT more complicated than that.  Sonic and Knuckles will head for Neo Metal Sonic and the Master Emerald while everyone ELSE beats up robots.  There’s also this oddly specific argument that goes on for two pages where they try to explain why Blaze SHOULDN’T go with Sonic and Knuckles despite being WAY overpowered, but it doesn’t really explain much and is either a contrivance to have it make sense why Sonic and Knuckles will fight without her or is planting something that we’re get back to later.  Now sure it’s a bit thin, but aside from the Blaze debate I think this set up works because this issue isn’t so much about plot and exposition as it is about characters and payoff.  The best part of this issue is the pages where they’re simply heading to Angel Island (they’re in some sort of aircraft and I have no idea where they got it from) and we get some brief yet VERY engaging moments with all the characters.  Case in point, they are still doing a PHENOMENAL job with Whisper who exudes so much character just through small moments and the artwork, and they seem to be implying that some of her backstory involves the jerkiest jerk to ever be a jerk; Shadow the Hedgehog.  Honestly, I’d be surprised if he DIDN’T have beef with a bunch of woodland critters wielding guns.

Now this doesn’t make up for the fact that most of the issues up to this point have been total fluff, but I’m glad that these characters are finally coming into their own now that we’ve been pedantically introducing them and back filling whatever continuity is pertinent.  There’s a poker game on the ship with all the characters you really don’t care about (mainly The Chaotix and Silver) and it’s surprising how well it works at giving them a sense of personality in a single page than they got in an entire issue.  The only SLIGHTLY sour note about it is Knuckles who granted is in full on rage mode due to Neo Metal Sonic sitting on his Emerald, but his dialogue here is really uninteresting and just comes off like a Shadow wannabe.  I’m actually genuinely curious how the whole Chaotix thing fits in and his relationship to the other members at this point, but sadly we’re gonna have to wait on that since they aren’t tackling it here.

Sadly the party plane eventually arrives at their destination and we have to start moving the plot along once again, but at least they throw in a rather spectacular action sequence with the biggest surprise being that the flow of action ACTUALLY makes sense!  They don’t waste two pages trying to build a complex sequence of movements and attacks; rather it’s a couple of splashes with each character doing something that’s rather straightforward yet effective.  Best of all, Blaze is the centerpiece of this entire siege as the writers FINALLY realize that she is not only the best thing about this book (especially with Tangle having a very obvious crush on her), but is OP as heck with her alt-universe Chaos Emeralds (also known as Sol Emeralds) giving her MAXIMUM FIRE POWER!  Seriously, the other Sonic books (the ones that SEGA wants us to forget about) had a whole bunch of spin-offs and mini-series, and I think already they’re proving that Blaze has enough going for her to lead her own stories; especially if they pair her up with Tangle!

If it seems that I’m barely talking about anything of consequence and just jumping from character to character to shamelessly rave about how well they play card games and shoot fireballs, well you’re not wrong.  Plot is oh so very secondary to this and really we only get to the whole Master Emerald thing in the last three pages.  While everyone else is smashing stuff and looking cool doing it (Shadow is conspicuously absent from the scene which I’m sure will pay off later), Sonic and Knuckles head for Noe Metal Sonic’s throne room to kick some robo-butt!  Knuckles in particular is still fuming at the audacity of all this and takes the first swing with Sonic right behind him, but it turns out he has a new trick up his sleeve and turns into… Super Neo Metal Sonic?  Are we REALLY only nine issues into this and already having doubled up power levels?  I mean I’ll pretty much watch ANYTHING that takes direct inspiration from DBZ, but the naming conventions were not the best thing about it!  And so the issue ends with Sonic and Knuckles up a creek without much of a paddle with the creek being a super powered robo kill bot and the paddle being whatever plot contrivance the writers need to think of before the next issue!

I’m glad that the series is finally getting into its groove and this is the kind of issue I’ve been waiting for since the series began.  The thing is that I’ve never reviewed a comic book series before, on an ACTUAL release schedule before, so I could be coming into this with the wrong mindset as it never really feels like we’re getting enough story, characters, and action each for something that we only get once a month.  It certainly helps that this book is doing a pretty solid job of paying off what it has been setting up all along, so maybe I’m a bit too impatient to get where we’re going and honestly should stick to trades (or keep reading those Archie books since I can go through them at my own pace), but then again the individual stories themselves had problems independent of how thin their content was; namely the very poor job they’ve done integrating THE SONIC LORE, the repetitive nature of the conflicts in most of the issues, and the hit or miss action scenes.  This issue manages to fix pretty much all of those issues as the story stayed engaging all the way through, they did a darn good job giving most of the characters something worthwhile to do even in very short parts, and there are even some hanging plot threads that I want to see play out in future issues!  Chances are it won’t stay THIS good once we finish the story arc since things will have to slow down as we build up to whatever the next major conflict will be, but for now this is probably the best issue so far and certainly gives me hope for we’ll end this first chapter on a very high note.