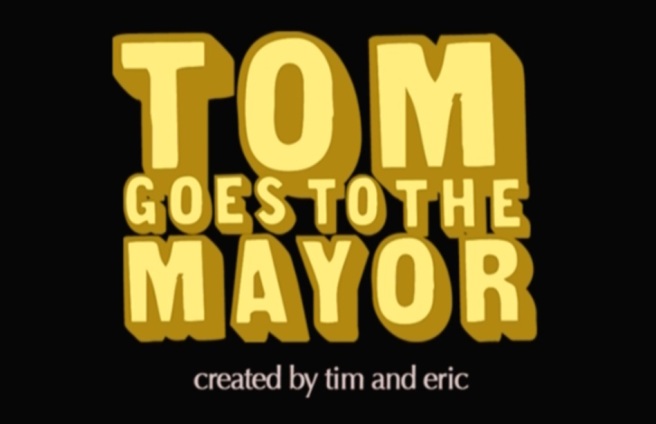 We’re back another episode of 21 Jefferton Street where it seems that Tim & Eric beat Phil Lord and Chris Miller to the punch by a good six years, albeit with a much smaller budget and a tenth of the run time.  The episode begins with yet another public service announcement for the citizens of Jefferton, though this time they couldn’t afford Janeane Garofalo and had to settle for Jan and Wayne Skyler; Jefferton’s own married news team.  The lack of A-List celebrities on hand however should NOT lessen their grave message as it seems that the greatest menace currently facing the town is the abundance of starch in people’s diet.  Now to their credit, starch IS something you should watch out for in your diet as it’s a common staple in some really bad foods and can even cause blood sugar issues if you’re already susceptible to those kind of issues (starch is a form of glucose), but like with basically ANYTHING you eat it’s all about moderation and finding out what works best for your system.  Now obviously this PSA isn’t about that as it’s paid for by the Jefferton Starch League, and the goal was clearly to scare people into looking at ridiculous (and pricey) alternatives to simply cutting back on the mashed potatoes.  Case in point, Jan and Wayne’s guest on the program is a wacky inventor named Sandy Winfield (Bob Odenkirk) who has devised a Starch Testing Machine that looks like a ColecoVision with a desktop calculator from the same era glued on top. Now sure, it CAN be a pain in the ass to measure starch content in all the food you eat (subtract the total grams of carbohydrates from the grams of sugar and fiber), but since Mr. Winfield’s method LITERALLY involves your ass as you have to have to test your own stool with it, I think doing a little bit of math is the much more convenient option.

If you’ve ever sat down and watched infomercials (is that even a THING now, or do we just let YouTubers hawk sketchy ass websites now?) this is all very reminiscent of that kind of FIX YOUR LIFE WITH THIS GARBAGE aesthetic and while not EVERYTHING you see in them are terrible (a lot of those products such as The Snuggie are primarily made for those with disabilities), using it in conjunction with poo is about as nuanced of satire as most that crap deserves.  Despite its obvious garbage-ness both The Mayor and Tom fall for it hook line and sinker with the latter being concerned that his stepsons are getting too much starch in their diet and thinks that the school should change their menus, but of course The Mayor hears none of that.  When Tom says “change menu” he hears “undercover mission”, and so instead of doing something ACTUALLY productive, The Mayor suggests that Tom go in as an uncover student to find out just what’s going on in that cafeteria and that he will act as his point man on the inside as an Honorary Vice Principal; vice seeming to mean exactly what it’s supposed to in this context unlike in Vice Mayor.  Clearly this makes no sense but you don’t come to Tom Goes to the Mayor for logical storytelling!  You come to see Tom get viciously chewed up and spat out by the authority figures he idolizes in a never ending parable against spineless capitulation, so obviously he agrees to the sting operation.  But wait, you may be asking!  If this is supposed to be a 21 Jump Street scenario, how is Tom supposed to pass himself off as a legit middle schooler!?  He may not be a particularly tall man, but he is a grown ass man nonetheless!  Well if this town had a budget they’d go with Mission Impossible Masks, and if there was a soul in the body of this town’s elected official he’d just find someone who could better fit the part; but this is Jefferton and he’s The Mayor, so instead it’s time to get a little Cronenberg-ain!  With the help of an endlessly amused Nurse Galifianakis (Zach Galifianakis) who can’t stop laughing at what he’s about to do to this man, Tom undergoes a series of invasive and life altering surgeries in order to make him look younger which include removing his shins entirely (also known as the Cotton Hill Treatment) and altering his vocal cords to make it sound like his voice is pitch shifted up to chipmunk levels.  Truly the most convincing disguise ever!

Surprisingly it seems to have worked as the middle schoolers accept him (going under the name Wilson Briar) as one of their own despite this being one of the most ingeniously horrifying creations that Tim & Eric ever made, and he even catches the attention of local BAD BOY Scrotch (Michael Cera) who loves to smoke in the bathroom and beat up on kids that he refers to as “friggets”.  While it’s not that surprising that there are little monstrous jerk bags like Scrotch causing general mayhem in middle school, it is a LITTLE bit surprising that Tom is going along with it.  I mean I guess at this point I should know better than to have any expectations for Good Ol’ Tom Peters, but when he starts beating up one of his own stepsons (one of the aforementioned “friggets”) to try and impressive a boy who calls himself Scrotch, even I found a new sense of loathing for the guy.  None of this is the least bit necessary by the way.  All he needs to do is eat the cafeteria food (which he’d already DONE by the time he starts beating up kids) and a drop a steaming log of incriminating evidence to hand deliver to The Mayor!  None of that requires him to ingratiate himself with the cool kids or even TALK to anyone; let alone beat the crap out of your own children to show how cool you are!

Tom’s bullying doesn’t go unnoticed and it seems that The Mayor is the only teacher on hand to deal with these shenanigans who immediately drags Tom to his office to have a little chat about his behavior today.  Tom is fine with this as he’s pretty sure it’s just a cover to recap the mission so far (he’s about ready to pop the lid off this thing if you know what I’m saying!) but The Mayor seems to have either gotten TOO much into character or completely forgot who the heck Tom is and starts treating him like he’s an ACTUAL middle schooler.  Then again, I really hope this isn’t how he treats the other kids at this school and he’s saving this form of punishment just for his good buddy Tom.

If there’s one thing that feels a bit awkward in hindsight about this episode, it’s that a show as dark as this probably shouldn’t be set in a school because it makes things a little more uncomfortable to watch.  Tom getting smacked around is always good for a laugh, but in the context of a school where corporal punishment is kind of a THING (a school in Georgia very recently reintroduced paddling in case you forgot what kind of hellish timeline we’re all living through); not to mention that there’s a subplot here where a girl keeps passing Wilson notes that is CLEARLY meant to be a joke on the formula (the undercover agent ALWAYS gets the attention of someone else for being so COOL and MYSTERIOUS) but is again pretty awkward to watch if you think about it for more than a second.  Oh, and let’s not forget the scenes of legit bulling against Tom’s son that he himself perpetrated!  Speaking of which, Tom manages to get out of The Vice Principal’s office with some sore cheeks that still have to go to work as he heads back to the bathroom to fulfil his civic duty.  What a shock!  Eating potatoes from the cafeteria increased his starch levels!  Clearly he has to bag it up and deliver it straight to city council, but before he can leave he hears a very familiar cry in the next stall over and it seems his stepson has been sitting in there trying to emotionally deal with the torment he’s been forced to endure.  Tom tries to smooth things over by saying that he did it all for him and his brothers to protect them from that DAMNED STARCH, but that he may have done a bit of it for himself as well.  See, Tom’s the kind of asshole who has so little going on in his life that he’ll take adulation wherever he can get it even if it means beating up children to impress bullies.  I’m sure his step son understands, right?  Yeah, don’t worry; Tom’s about to get his comeuppance.  You can be sure of that!  We cut to sometime later where The Mayor has shut down all the schools in the city and now has to explain to City Council why that was such a good idea when again, a simple menu change would have sufficed.  Instead though, The Mayor stalls for time by introducing Tom to them as the hero who discovered the source of the starch epidemic, though Tom seems to be a LITTLE bit worse for wear.  The good news is that after he submitted the evidence, they WERE able to do a few surgeries to try and get him back to his old self.  The bad news however (or BETTER news considering how much you hate Tom) is that they completely botched it and Tom can barely speak now while also having what appears to be hockey sticks for shins.  DAMN YOU, INSURANCE COMPANIES!!

This was actually one of my FAVORITE episodes and I remember it feeling like such an upturn after the rather mediocre Glass Eye, but when REALLY looking at it there are some rather uncomfortable flaws embedded into the humor that makes it not quite as funny as I remember it being.  Sure, Tom going undercover as the least convincing middle schooler possible is a funny gag, as is a bit throughout the episode where he records secret notes to himself while speaking at full volume in front of everyone, but the subplot about Tom beating up his own son feels a little TOO sad to be funny, and while it’s a very small part of the episode that is FULLY aware of the creep factor of it, the girl who develops a crush on Wilson Briar feels more and more like a bad idea.  There’s some great stuff to be found in here from the satire on panic driven child protection causes (most of which exist just to scam a few bucks off of concerned parents) as well as the 21 Jump Street homages that beat out the 21 Jump Street movie by quite a few years, but I can see some people getting turned off by some of the jokes in this one.  Heck, right up there with killing animals and unnecessary cruelty as pet peeves in entertainment is bullying fat kids, and this episode certainly has that!  It still feels like such a waste of potential that Tom’s stepsons never really got to do anything in the series, and I sincerely like to think that they turned out just fine despite having such a dip shit for a stepfather.  Heck, they’re basically gonna do the same thing with The Connors, so why NOT have a series about the much more likable characters in this series!?