We’re back with another episode of Tom’s Anatomy as Tom is forced to confront his greatest enemy yet; the Pharmaceutical Industry!  I’m calling it now; dude’s a total goner by the second act.  The episode begins with a magical scene of Tom and some beautiful lady gallivanting in a world of rainbows and unicorns; sharing moments of happiness that clearly cannot last because this is Tom and everything that’s great in his life eventually turns to garbage.  Now you can probably surmise form the inclusion of rainbows and unicorns that this is all one big dream sequence, but where things start to turn is when Tom has a… a-hem… accident in his sleep.  No, not number one or even number two… number three.  Well that’s not necessarily a BAD thing, right?  I mean sure, it’s inconvenient to have to wash the sheets, but a good time is still a good time, right? Well… not quite.  You see, the moment he… finishes, he’s violently woken up as the act seems to have caused him a great deal of pain as well as the condemnation of his lovely wife Joy who by the way wasn’t the woman in his dream.  These abrupt interruptions are also wreaking havoc on Tom’s sleep schedule to the point that when he visits The Mayor the next day, he ends up collapsing right there on the floor before he can even propose his latest get rich quick scheme.  The good news is that Tom wakes up in a hospital bed instead of The Mayor’s basement or his underground lair beneath his office.  The bad news?  Well it looks like Tom’s issues are not just a lack of sleep and a few uncomfortable wet dreams.

“I’m afraid that you have TV cancer.  You’ll cough up a spoonful of blood every once in a while, and a wacky character actor will teach you the meaning of life before you die.”

Doctor Galifianakis explains that due to his severe repression and lack of emotionally fulfilling relationships, Tom’s Endocrine System has gone haywire and has reverted his hormones to a state of perpetual puberty; hence the nigh constant nocturnal emissions.  To make matters worse, he’s also developed a severe case of Irritable Semen Syndrome (ISS) which causes some seriously painful burning whenever he blows an involuntary load.  Now I’m sure the first question you’re bound to be asking is if any of this is real!  Well semen allergies are a thing (even if they’re most commonly found in women), and there IS a condition known as Post-Orgasmic Illness Syndrome (POIS) that can cause a WHOLE lot of reactions after a dude has finished his business.  From what I can gather, the act of completion causes a severe immune response in the body, so it’s basically like getting the flu every time you ejaculate.  Fatigue, headaches, intense discomfort, it’s not a lot of fun and certainly makes OTHER stuff that SHOULD be fun much less so.  That said, as far as I can tell it’s not a psychological issue like what Tom seems to have, but then I don’t turn to Tom Goes to the Mayor for scientific accuracy or medical advice.  The point is that Tom is stuck between a rock and hard place (nyuk-nyuk-nyuk) as he’s either gonna have to get expensive and painful surgery to get this resolved or have an honest and open conversation with his wife about his feelings and their relationship.  Needless to say that the latter option is completely off the table (even though I’d LOVE to see Tom go to therapy) and as a matter of fact the former option isn’t available either because tom’s 12 hour insurance policy just ran out.  It may seem that all is lost for our perpetually irritated hero, but fear not!  The Mayor might know someone who can help! 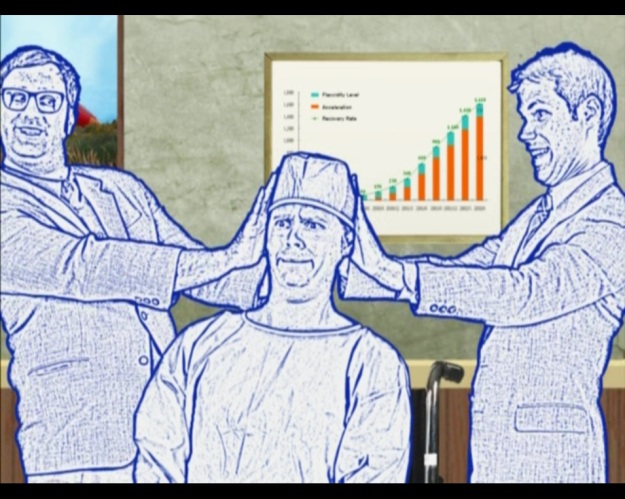 Yes, this turns out to be the triumphant return of Dr. Michael Ian Black (played by Michael Ian Black) who’s no longer an Independent Third Party Verifier but is a sales rep for a line of drugs that JUST SO HAPPEN to cure Tom’s sexual dysfunction.  Well… sort of.  The medication which is called Provolanaproxalidamine-C (or Provo-C for short) won’t necessarily FIX anything; rather they’ll completely shut down Tom’s libido so that he won’t have sexual thoughts in the first place.  Maybe not the PERFECT fix (especially considering it’s a re-purposed fox tranquilizer) but it’s better than nothing right?  Sadly America’s health care system strikes once again as it turns out these lousy pills are VERY expensive and there’s no way Tom could afford them.  Granted I’d be surprised if he could afford Aspirin, but either way he’s all out of luck; that is unless he’s willing to do something ELSE for the pills!  It seems that Dr. Michael Ian Black needs a new “face” for Provo-C and Tom’s utter averageness is just the kind of bland agreeability that they need for commercials and billboards!  What could go wrong!? 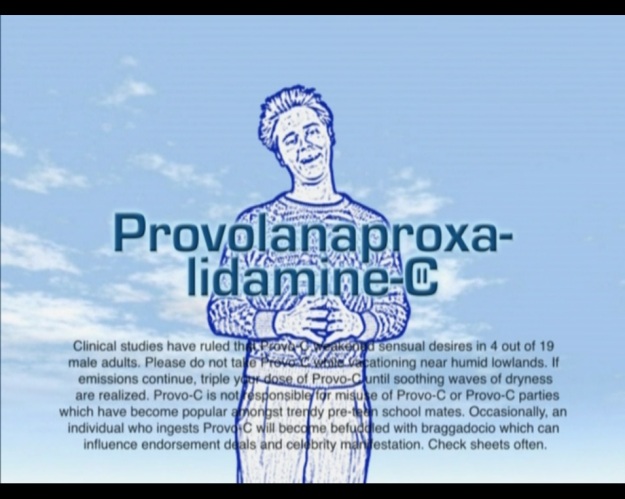 “My name’s Tom and I’m here to keep you from getting erections!”

Actually, NOTHING goes wrong!  Sure his name and face are connected to an anti-arousal medication (which isn’t in and of itself a problem even though he was hesitant to start doing this because of that), but he’s making money, he’s getting his pills, and he’s become something of a local celebrity!  However, this is Tom we’re talking about and as Tim & Eric say on the commentary track, if we’re gonna give Tom any sort of success, he’s gotta turn into the biggest jerk.  I mean it certainly goes along with MY theory that Tom is meant to be the embodiment of American mediocrity; white mediocrity as well, though one of the show’s failings is how little it even ACKNOWLEDGES other races, let alone explore Tom’s white privilege.  Tom loves to play the victim in everything he does which in SOME episodes is appropriate (The Mayor is pretty much evil incarnate), but when you get right down to it he’s just a guy who expects things to be handed to him.  He silently suffers through his lot in life and his plans for getting out of his crappy situation (i.e. becoming an entrepreneur) are quick fixes and half thought out schemes instead of something that would take genuine effort, so when he DOES get some success he ends up squandering it.  Eventually his ego gets so big that he starts berating The Mayor and Dr. Michael Ian Black while getting ready for an interview with the Married News Team, though I at least understand his frustration over being called Steven over and over again by Dr. Michael Ian Black. 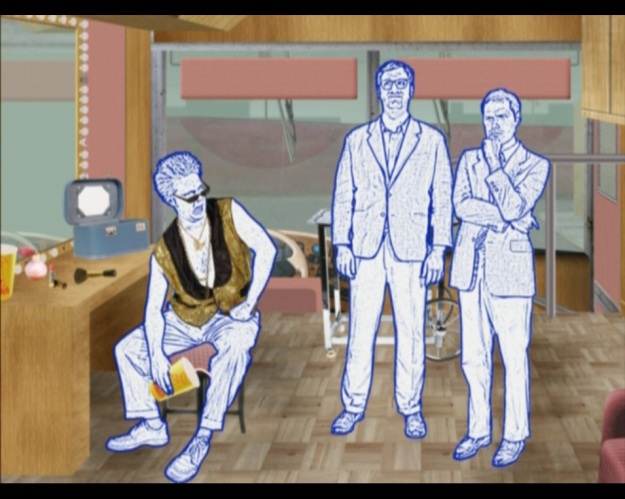 Probably wasn’t the best idea to walk out on the interview though and quit his job as the Provo-C spokesperson, but hey, at least Tom stood up for himself even if it was due to his irrational hubris!  We cut from the Tom walking out of the bus to another sexy dream that he’s having where he sure enough is back to having Chronic Nocturnal Emissions along with unpleasant burn of Irritable Semen Syndrome.  Tom has been cut off from his medication and to make matters worse it looks like the Provo-C company is charging him for all the Provo-C he already took.  Goodbye Model-T, goodbye cushy life.  As Tom is reflecting on his mistakes by staring out his bedroom window, he finds The Mayor and Dr. Michael Ian Black starring back at him as they apparently have been standing in his front yard for some time now… for some reason.  Tom tries to apologize for his callous behavior and see if he can get any more pills, but The Mayor and Dr. Michael Ian Black’s hands are tied (mostly because they don’t want to) and the episode ends with the two of them being frankly disgusted with the… mess, that Tom seems to have made due to his condition. 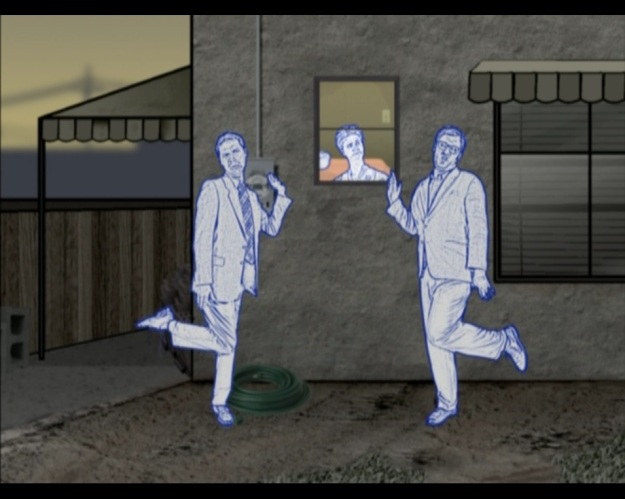 I like this episode a lot more than the last time we saw Dr. Michael Ian Black in Vehicular Manslaughter; mostly because the narrative was a lot more focused and there was an actual arc to Tom’s character.  For most of this series you can say that Tom was put in rough situations and that his poor decisions were more due to desperation than anything else, and while I wouldn’t really agree with that sentiment (his deference to others who are clearly taking advantage of him is not a pitiable fault, especially when more often than not it causes serious harm to other people) I can see where people would be coming from with that.  This episode on the other hand, while not the DEEPEST exploration of his character or the subject matter at hand, at least gives a rather unequivocal answer as to the kind of guy Tom is, and that is a selfish jerk who’ll readily start bullying others if he’s given even the slightest bit of leverage.  This is why Tom works as a cautionary tale and why we shouldn’t have TOO much sympathy for him when things go poorly.  No matter how bad of a situation we find ourselves in, we should always strive to NOT be like Tom; the guy who gives up when things get rough and gives in to his worst instincts when things go right.  I wish the episode did go a bit further into the Pharmaceutical industry as the Provo-C element feels rather shallow (Tom could have been selling pretty much anything), but not every episode can be Porcelain Birds which is a shame but also not everything that this show wants to be.  It’s another solid episode in the series and a perfect send off for Dr. Michael Ian Black who sadly won’t be appearing in any further episodes.  His skills are put to better use mocking fascists on Twitter anyway.

This is the future liberals want!