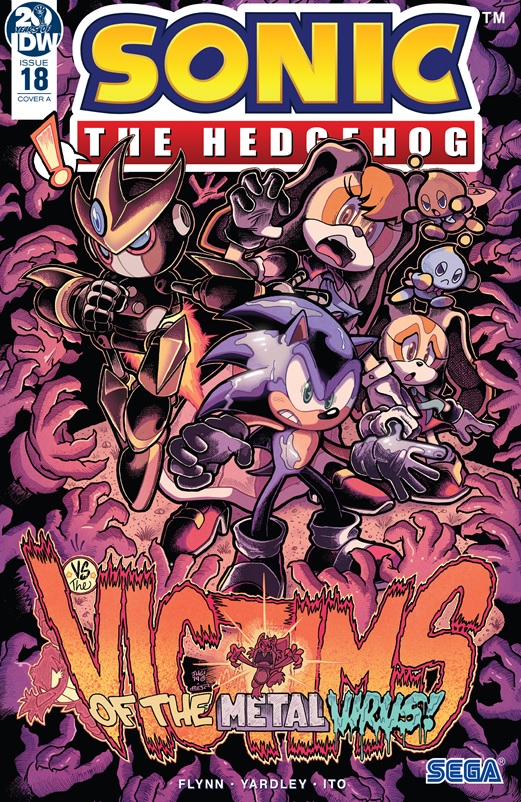 We’re back with another issue of The Spin Dashing Dead, and unlike Robert Kirkman’s book I’m PRETTY sure this issue won’t turn out to be the final one.  Amazing as it would be for everyone to turn into robot zombies and the story to just end, we still have SOME hope for a triumphant conclusion to all this despite the tragic loss of Charmington L Beesworth (also known as Charmy) last issue and Sonic’s progressively worsening sickness.  Seriously, is Sonic trying to fill the gap that Game of Thrones has left?  I’m not saying we’re there YET (we’d need a few more decapitations), but we’re certainly closer to it than at any other point in the franchise’s history!  Anyway, before I go into any more random tangents about series that have come to a close (I could make an Archie reference here but I shall resist the temptation), let’s focus on the issue at hand and the continued efforts of THE RESTORATION to contain the ROBO-VIRUS!  Can Sonic and crew rescue those caught in the midst of Eggman’s latest attack, including Cream the Rabbit!?  Let’s find out!!

Right off the bat, I want to point out that they gave us an ACTUAL map of the world we’ve seen so far as well as a running tally of who’s missing or zombified which actually helps a lot in making the world feel a lot more cohesive rather than a series of random cities plopped into the story whenever convenient.  I mean… that’s still KIND of what’s been going on, but at least they’re keeping track!

If nothing else, we can confirm that we’ve seen the extent of Eggman’s virus and that it isn’t off somewhere else causing havoc.  We have the attack on Windmill Village from issue 16 and the nightmare that was Seaside City in the last issue.  I’m not sure why they skipped over Sunset City, but I guess it’s because no one important lives there while the NEXT village on his list is the home of one Cream the Rabbit; a character I know nothing about.  She wasn’t in any of the games I can remember other than Sonic Heroes, and as far as I know she first showed up in Sonic X, so I could probably do with a bit of brushing up.

Okay, so Cream was originally created for Sonic Heroes which came out in 2003 (the same year as Sonic X), BUT she first appeared in Sonic Advance 2 on the GBA in 2002.  Since then her appearances in games has been a bit spotty as she seems to have mostly been in the… I guess you’d call them non-canonical games like those Mario/Sonic Olympic deals, and other forms of Sonic media like the aforementioned Sonic X and the Archie comics series.  Here though, the way that Sonic talks about here implies there was some sort of grand adventure they had like they were Joel and Ellie (apropos given the situation at hand), but as far as I can tell they aren’t referencing something specific from the games and I don’t think any other source of media is “canon” here.  She’s not the only one in the village though, and man it’s gotta be a pain to be an average citizen in this universe!  They’re STILL trying to rebuild after the fall of Eggman right before the comic started, and now they have to deal with robo-zombies!  Next thing you know, the jerk is gonna somehow wind up President and you’ll have a bunch of wannabe jerks like Starline flooding the media with reports of Sonic committing acts of terrorism and throwing cement filled milkshakes.

Sonic is doing what he can to fight back against the robo hordes, but it’s proving to be a more and more arduous task as the virus he has within himself keeps on flaring up and he has to burn it off by running fast; something I STILL think is a rather silly premise but at least it gives a sense of vulnerability for character that rarely shows any sort of shortcoming.  Speaking of shortcoming, back on the Eggman Airship he and his new cohort Dr. Starline are discussing how awesome their plan is when they make a discovery about the virus.  It turns out that over time those who are infected with the virus become less and less responsive to his commands.  I honestly don’t recall that ever being a thing in the previous episode as I just assumed Eggman was fin letting them lose to fend for themselves, but apparently he’s been giving commands and only now are they being ignored.  Eggman is typically unfazed by the prospect of losing control of one of his creations since it’s still doing a good job of breaking down the fabric of society, but Dr. Starline is finally starting to realize that the big brained doctor might just have a big head to go with it.

It’s a good bit of character development for the guy, but I’d be lying if I said I wasn’t disappointed by what this moment implies.  I was under the assumption that he had an angle here and was playing into Eggman’s maniacal side to at some point stab him in the back, but this only further cements how sincere his trust in Eggman has been up to this point.  Still, perhaps a backstabbing is on its way if he’s starting to see the Not-So-Good Doctor for what he is, and it’ll be interesting to see if Starline really does go rogue at some point.  Anyway, while those two are having their little spat, Sonic is continuing to kick butt and take serial numbers, but he’s clearly starting to lose the war he has with the virus as more and more of it covers his body.  Fortunately Cream’s pet robot GEMERL has come to save the day, and best of all he doesn’t seem to be affected by the virus since he’s inorganic to begin with!

Okay, so apparently he’s in one of the few Sonic games I haven’t gotten around to which is Sonic Advanced 3 (supposed to be one of the better handheld titles) and I guess he was the bad guy who eventually turned into a good guy and then never showed up again outside of the Archie comics.  He doesn’t even show up in those Olympic Games games or as a spirit whatever in Smash Bros!  Look, I’m not what you’d call a Sonic expert but I know WAY more than what I assume has to be the target audience of this book, so there’s no way they’re gonna know why the little rabbit character has a robot.  Heck, they probably won’t even know why the little rabbit character has a Chao hanging around with her, though I’m guessing they’ll assume it’s another Wisp.  It’s not THAT big of a deal because they actually do some interesting stuff with the guy in this issue, but coming out of nowhere like that and having to look up stuff online to get proper context is the kind of stuff that has always turned me off of comic books in the first place.  He tells Sonic to get the fudge out of here before he goes full robot and defends the town after Sonic begrudgingly agrees to do so.  Unfortunately, Cream isn’t particularly pleased with the way that GEMERL is keeping her and her family from turning into horrifying cybernetic creatures and for a brief moment it turns into that one episode of Rick & Morty, albeit without the insufferable smugness and gratuitous gore.

It’s a bit of an odd scene to be honest because it implies that UP UNTIL THIS POINT, GEMERL has been straight up murdering the robotic zombies which STILL feels a bit too dark for this series, so if that WASN’T what he was doing then what’s the problem?  He’s still punching them so he hasn’t given up violence completely; he’s just doing it a lot less efficiently!  That efficiency by the way is very much needed at the moment because soon after GEMERL goes off to do this the hard way, Cream’s mother Vanilla (the oddly humanoid proportioned rabbit) gets attacked by Zombots that got into their home.  Thus comes the tragic moment of the issue as Cream’s chao buddy Cheese along with Vanilla’s chao buddy Chocola go to fight them off; ensuring their own doom but giving Vanilla and Cream a chance to escape.  Suddenly my Walking Dead gag at the beginning is starting to feel more apt…

Sonic comes in about ten seconds after it would have been helpful (one of the few documented cases of him being too slow), but he at least manages to save Cream and Vanilla so they can escape to fight another day.  He captures both Cream and Chocola in glass jars which probably aren’t gonna work, and continues to kick but with GEMERL right up until the end of the issue where he’s informed that Team Dark are in Sunset City fighting off the robotic menace there.  I’m not sure why Eggman’s plan was to pass over that city entirely and then double back after he’s already gone way past it, but those are questions to be answered next time and I’m not prepared to criticize the depths of his genius just yet; especially considering how effective his plan has been up to this point! 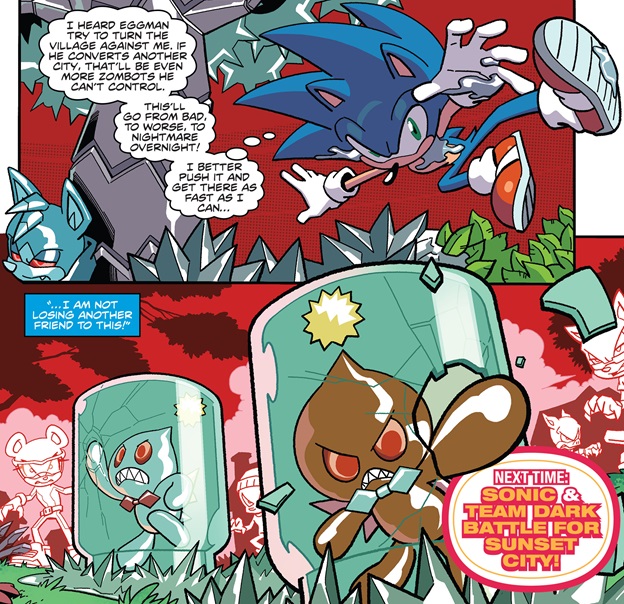 The issue is basically a continuation of the last two issues.  Not a lot of plot, but plenty of action on the page so that it breezes by.  However, I think that dipping into that particular well again was not the best idea as this episode is not nearly as engaging as issue 17.  This kind of action based storytelling coupled with big shocking events works a lot better with characters we already know and have been built up to mean something prior to bad things happening to them; hence why Charmy’s robotization along with the reaction from the rest of the Chaotix works as well as it does.  Cream is certainly a recognizable aspect of the Sonic canon, but she’s a character that doesn’t have much going for her right out of the gate and could have used a much earlier introduction to make the tragedies of this issue that much more impactful.  Still, it’s a fine issue and continues the momentum on this rather impressive arc just fine.  Of course I always feel like this book kind of dillydallies about, but I’m getting used to the pacing of these and as long as Cream has SOMETHING to do in the next few issues then I’m fine with giving this issue a thumbs up.

So this didn’t really fit into the recap, but I wanted to point out that two of the characters that show up for one page are ACTUALLY OC characters named Rachel and Blate.  This was confirmed on twitter by the artist Tracy Yardley, and while I unfortunately couldn’t find the artist behind Rachel (the purple one), it appears that Blate was created by Deviant Artist GhostBulb.  Now I have to make an OC just so I can lament the fact that they don’t show up in the comic!