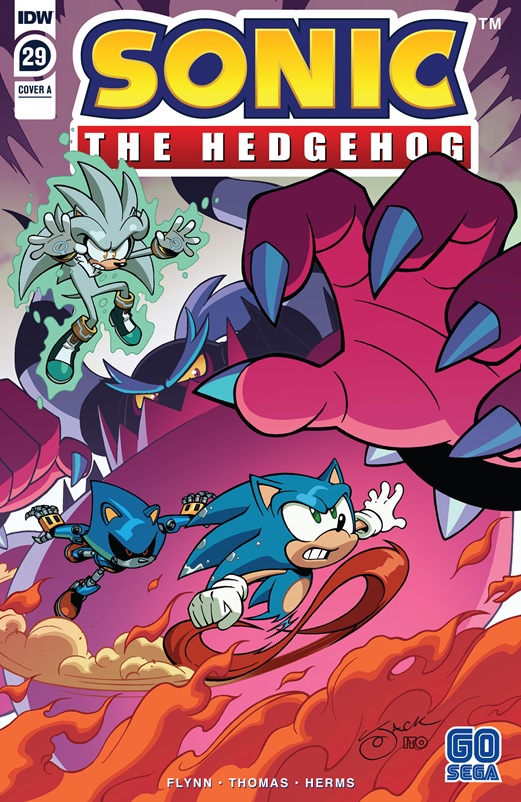 I don’t know about you, but this is a day to celebrate because IT’S FINALLY OVER!!  The Zombot arc certainly had its high points early on, but the longer it continued the more repetitive it all felt which was not helped by an ACTUAL pandemic happening that not only delayed the book for a few months but made the overwrought narrative a bit TOO real.  This is it though; no more Zombots for the foreseeable future because the war is coming to an end as our heroes make our last stand!  Will this story end with a bang that makes up for a lot of its missteps, or is this the final hurdle we just need to get over to move on to new and hopefully better things?  Let’s find out!!

The issue begins with our heroes in dire straits.  They may have collected MOST of the Chaos Emeralds, but they’re one short and are facing own an endless hoard of Zombots as well as Zavok who’s gone full Kaiju and is spitting atomic breathe at Angel Island.  For a story arc that had no problem taking its sweet time getting anywhere, these last few issues have certainly picked up the pace with this one in particular trying to do about five issues worth of content all in one go to finally bring this arc to a close.  Hey, I’m not complaining considering how much I grew to loath the Zombot arc (would have been MUCH better if they cut the number of issues in half), but that means there’s WAY too much going on for me to give proper context to here so I’ll try to explain.  We’ve essentially got one story going on with Metal Sonic, Regular Sonic, and Silver trying to attack Zavok and get that final crystal while everyone else on the Island gets to have their last-minute hero moment or tragic ending.  Knuckles starts having a fistfight with Zombot Shadow, Whisper confronts Zombot Tangle (though at least this time they don’t give her an over the top reaction), and Eggman acts like the total jerk-bag you see in every zombie movie; down to the humiliating death scene to punish him for his utter hubris!

None of it is particularly compelling as the TRAGEDY well has run pretty dry for me this arc, but it fills the panels in between the more important story and at least gives this issue a sense of finality to it as you’re reading it; confirming that there’s nothing else up the writer’s sleeve to keep this going if Sonic fails here.  The plan is for Sonic with the help of Metal Sonic and Silver with the use of his psychic powers to pull a King Kong on Zavok and buzz around him until they can get close to the Chaos Emerald embedded in his chest.  Where the last issue was a definite improvement in terms of action continuity, this one feels like falling back on bad habits as the flow of the set-piece moments here is a bit janky.  One panel Sonic and Metal Sonic are zipping through the air with determined looks on their faces and the next panel has Zavok spitting up a fireball with no establishing shots between to show Sonic’s relative position to Zavok’s mouth; nor any sort of indication in the fireball panel that Sonic and Metal Sonic were engulfed in the flames.  It’s one of those things where a second read (or even just re-reading each previous page after you finish a new one) helps to establish the exact course of events, but even with that glaring issue, it’s not THAT hard to figure out what’s going on in the broad strokes.  The thing that actually confused me the most was when Metal Sonic used some sort of geometric shield thing to protect him and Sonic from the blast.  Apparently, this IS a thing from one of the games, but I’m going to give myself a bit slack here since as far as I can tell it ONLY ever appeared in Sonic Adventure 2; not even in the story mode itself but just in the Battle mode!

Eventually though, they do manage to get the Chaos Emerald off of Zavok and both Sonic and Silver got Super Saiyan to Deus Ex Machina all this nonsense out of existence!  The Chaos Emeralds have always had a very… let’s say FLEXIBLE set of powers, so it’s not like you’re breaking canon by having them do basically everything and the kitchen sink here; I just wish that once again the artwork could do a better job of conveying what’s going on.  They defeat Zavok with a series of… I don’t know, I guess they’re called CLASHES in DBZ where you basically fly into the opponent and let your momentum and hard as steel muscles smash their bones, and that’s enough to shrink him back down and send him flying.  Using the Warp Topaz, Sonic creates a portal that’s within spitting distance of the surface of the sun while Silver… uses his Super Psychic powers to drain the entire planet of the Metal Virus; returning everyone to normal and banishing this storyline to the fiery depths of a nearby star to never bother us again.  Unless of course they decide to do a Nuclear Man story at some point in the future, but for now the virus is gone and the supporting cast is back to normal!

All is not well however as the Warp Topaz proves to be an inferior stone and Sonic is having trouble keeping the portal open long enough for Silver to eradicate every last trace of the virus.  With a SHA-KOOM, Silver is launched back to Earth with frightening speed and leaves a pool-sized crater in his wake.  He’s ultimately fine (presumably his SUPER form protected him from breaking every bone in his body) and as it turns out he had JUST barely managed to suck out every last drop of the Metal Virus before the explosion which closed the portal for good and presumably destroyed the Warp Topaz as well.  However, this victory has come at a terrible cost as there is no trace of Sonic to be found; Super or otherwise.

Much like the ending of the last big story arc where Metal Sonic turned into a giant space monster (or something like that), the ending feels a bit rushed, clunky, and overstuffed.  HOWEVER, I am glad that we’ve finally come to the end of this storyline and that we can finally move onto something else; especially with the ending here that implies a Sonic-less world, at least for the time being.  Now of course this is somewhat similar to the initial premise of Sonic Forces which I’m hoping against hope is not the direction we’re going in since the first arc was already about the Egg Empire taking things over and it’d be nice if we got a few issues that didn’t have world-ending stakes and simply allowed the characters to breathe a bit and focus on something more personal, but I guess we’ll have to wait until next month to see where the chips will end up falling.  Despite their breakneck pace to frantically tie up all the loose ends, these last few issues have been fun to read and I’m hopeful for the future of this series; as long as Tangle & Whisper get another mini-series!  Seriously though, if it turns out he was sent to the Archie Comics dimension and meets up with the Freedom Fighters, I will squeal with an embarrassing amount of delight!