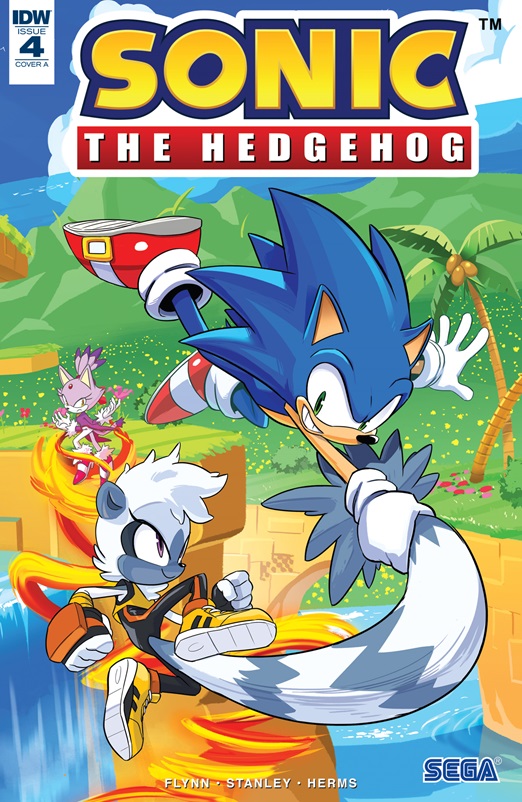 We’re back with another issue of Sonic Empire, though hopefully THIS comic book shakeup won’t try throwing Nazis in to seem edgy.  It’s also THE LAST issue they’ll be putting out on a weekly basis as every issue going forward will now be released monthly, so this is the last chance they have to hook new readers in (and old readers of the Archie books) before things go back to a more realistic schedule.  Not only that, but this is also the issue where we get introduced to an original character for this series, so on top of keeping Sonic the Hedgehog relevant in the world of comics, they also have to sell us on something new for the Sonic franchise, and we all know how often THAT works out (*cough* Silver *cough* Sonic Boom *cough*).  Can IDW tie everything together as they wrap up this month long sales pitch to fans new and old?  Let’s find out!!

The issue begins as these invariable do with the always fast yet perpetually late Sonic the Hedgehog happening upon yet another town mid-besiegement by an army of Ruthless Robotic Rabble Rousers; though this one seems to be the worst yet by a large margin as there’s a freaking imperial star destroyer (or at least a dropship that big) raining a deluge of ticked off robots onto the unsuspecting and barley coordinated masses!  Things seem pretty grim as Sonic EVENTUALLY barrels his way through the city gates, but don’t lose hope just yet!  There appears to be at least ONE fighter within their midst!

So here she is!  IDW’s first attempt at an original character and she’s a lemur named Tangle who uses her tail the same way Bianca Blair uses her hair; to smack people around with and only somewhat effectively so!  I mean it’s not like we need a full character stat sheet the first time we see her so we’ve documented proof that she’s a bad ass, but the issue is not doing a great job of selling her combat prowess on its own.  The whole tail thing is awkwardly shoehorned into the action scenes and the artwork doesn’t make it all that clear exactly what she’s doing with it.  As best as I can tell, she can wrap robots up with it and then squeeze so hard that they explode; a tactic that the book itself confirms is somewhat amateurish as we see that her tail takes a crap load of damage whenever she does that.  We don’t learn much about Tangle either other than this one random village on a hill is her hometown, and that seems like a rather big mistake to make when this is the first time that we’re seeing her.  Knuckles and Amy can kind of get away with that considering how much BRAND RECOGNITION they have with this franchise, but the same is not true for Tangle the Lemur who comes off as a side kick at best which I hope is not the direction they’re planning to go with her.  FORTUNATELY the writers managed to kick this issue up a notch by including THE BEST SONIC CHARACTER OF ALL TIME!  Do NOT argue with me on that, it is an absolutely FACT!!

Seriously, EVERYTHING about the issue gets better the moment Blaze is introduced; not to say it was BAD before, but she manages to take a rather okay issue and turn it into something a lot more memorable.  The action scenes are much more fluid and easy to follow, her power set is very clear and looks EXTREMELY powerful, and… I don’t know she’s just cool, alight!?  Her design has always been unique and interesting, she has FAR more dimension to her than serious minded character I could name (*cough* Shadow is boring *cough*), and as much as I like both Rouge and Amy as far as female characters in this franchise, Blaze doesn’t have as much baggage to her with the former being primarily portrayed as an obsessive (and condescendingly girly) fan girl and the latter being a bizarre stab at anthropomorphic cheesecake.  Hey I’m not judging, but when that’s a character’s STARTING point, you have to put in A LOT of work to make them more than that which this franchise hasn’t really done, at least as far as the games are concerned.  Anyway, the fight is going pretty well for the trio but their efforts prove rather fruitless as there’s still the issue of the giant plane in the sky with a seemingly endless supply of troops that will eventually wear our heroes out.  Fortunately, Tangle comes up with a BRILLIANT plan to get Sonic aboard to cause some serious havoc which is to use her super tail as some sort of slingshot to shoot him and Blaze into the air, and then Blaze will toss him right into the cargo bay to cause havoc so that she can better crash the damn thing right into the ground!

Well that about does it I suppose!  Sonic’s ability to survive falls at any height continues to be on full display as he’s AT BEST mildly winded by the whole experience, and the villagers are now saved!  Hopefully that airplane didn’t crash into ANOTHER village though; otherwise they’re pretty much back to square one.  Oh!  Where is Sonic’s manners?  He forgot to introduce Tangle the Lemur to Blaze the Cat which he does on the very next page in a somewhat awkward transition, but at least we get her backstory NICE and cleared up!  For one, they’re COMPLETELY ditched the Sonic 06 stuff as far as I can tell and are sticking to her original backstory from Sonic Rush; namely that she’s a princess from another dimension (hm… this new series is certainly LACKING a princess now that Sally’s gone…) who is ALSO the guardian of the Sol Emeralds which, as Sonic so eloquently puts it, are like Chaos Emeralds but fiery.  Well that’s BASICALLY true, though they failed to mention Dr Eggman Nega who for some reason was the ONLY parallel character from that universe (although Blaze’s shoes look SUSPICIOUSLY like Sonic’s), but let’s not overburden this series with pedantic continuity concerns!  Now that we have her backstory out in the open, what is her PRESENT story?  Eh… she felt the WILL OF THE SOL EMERALDS telling her to come back to our dimension to avert some kind of catastrophe, so I guess we’re trying to raise the stakes even higher on whoever this MYSTERIOUS NEW BAD GUY which is a laudable effort I suppose, but it’d help if the new bad guy ACTUALLY did something nefarious or at least had a minor victory of sorts.  Heck, they should have stolen the Chaos Emeralds by now, right?

Oh well, I’m sure they’ll get around to doing something interesting later.  For now though, we cut from our happy heroes over to someone we haven’t seen since this series began; Dr Eggman, who is… I don’t know, creeping on people through his crappy apartment window?  I mean I get that we want to establish this guy at SOME point, but as the capstone to this first batch of issues without any real context or purpose?  Meh.  I’m just not feeling it; especially considering we spent the last three issues reminding the audience that Sonic already kicked his ass before the series even began.

In all honesty, I THINK I enjoyed this issue more than any of the other ones despite it being about on par with both the first and third ones with two being the OBVIOUS winner for best issue.  As an overall story, the one with Amy had some really great character development for the two of them and that’s really what I want out of these books.  Not overlong action sequences or scenes of Sonic being TOO COOL FOR SCHOOL; and yet… Blaze is my absolute favorite thing about this franchise.  Her role in this issue is my favorite thing to come out of the four issues so far even if the Amy stuff was ultimately a more complete and satisfying experience, and I get the feeling that I might not be the only one who sees potential in this character.  Maybe I’m projecting a bit here, but she gets a lot of gravitas in this story; from her Han Solo save that brings her into the issue to the artwork that does a great job of showing off her powers, she seems to be getting quite a decent push in this issue towards MAIN CHARACTER STATUS which is the direction I hope they take her going forward.  Heck, they put her in this before even longer running mainstays like Shadow and Rouge, and they even go as far as to fully explain her backstory so we KNOW what parts they’re planning on keeping and which they’re throwing out (*cough* Sonic 06 *cough*) which you’d only REALLY need to explain if she’s gonna be more than the occasional side character, or at least that’s what I hope.  As far as the non-Blaze aspects of this book, Tangle the Lemur is a solid enough addition though I think she needs a bit more depth to her if she’s gonna be sticking around for future arcs, and I think this is a much better story overall than the rather lackluster one we got with Knuckles in the last issue.  Really, the only weak point as far as the writing goes (outside of being a bit thin with Tangle’s characterization) is that stinger at the end which comes out of nowhere and has zero context to what we’ve been building up to in prior issues.  You’d think NOW would be the perfect time to reveal who the new bad guy is which would be a solid hook to keep people coming back now that we have to be WAY more patient between issues, but instead we just get a random shot of Eggman to keep up satiated.  Yeah, not the best landing for a rather ambitious and mostly successful run of issues if you ask me.  Still, I think that taken as a whole the four issue arc does a fine job of setting up our characters for the adventures ahead, though I still wish they had done more with them instead of repeating the same arc in each one.   That’s why the Amy issue ended up working best, because the whole SIEGE ON THE VILLAGE thing was a secondary element to the characters that are the main hook of this series.  Seeing Sonic punch robots can be fun, especially when the artwork is on point like it is in the latter half of this issue, but it can get dull pretty quickly, especially when there’s really no stakes to any of the fights.  We don’t know these villagers, we don’t know who the villain is, and there’s really no chance of anyone getting seriously injured this early into the series which means the endless fighting has no real bite to it.  At least that’s what I think anyway, but then I’m the one who also thinks we should just rename the series to Blaze the Cat and cut all the scenes of Sonic for more scenes with her.  Hey I can dream, can’t I!?