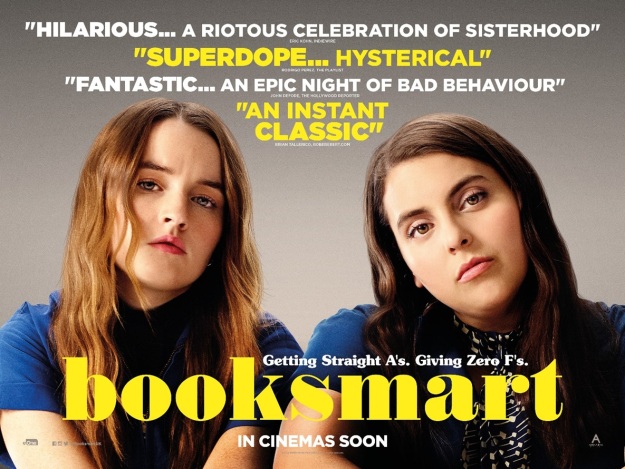 I probably should keep tabs on some of the more interesting films being made, particularly those by studios other than Disney, because this one flew COMPLETELY under my radar and I’ve only just now started hearing about it despite getting rave reviews and being directed by an actor I actually like!  I watched every season of house, yet I didn’t know that Thirteen had directed a movie!?  I mean at least it means that I can go into a movie with few preconceptions on what it will be, but it also means that unless it comes to the big local theater I’m likely to miss it; particularly this year where I can barely keep up with the big releases, let alone the smaller stuff.  Thankfully this one is getting enough buzz that even my regular theater has screenings of it, but will it manage to live up to the hype or will I once again have to be rather nonplussed about a critical darling?  Let’s find out!!

Molly and Amy (Beanie Feldstein and Kaitlyn Dever) are the best of friends who are about to graduate from high school as the Valedictorian and Salutatorian and have big plans for the future which include both of them going to Standford, graduating first in their classes, and probably being President and Vice President one day.  Who knows!?  THE SKY’S THE LIMIT!  Sure, being such bookworms and ONLY focusing on getting good grades and doing activities that will look good on a college resume has left them as something of outsiders (which I found a bit odd considering the top kids in MY class at least were the popular ones as well, but whatever), and as their last day of high school approaches, they come to realize that MAYBE all that studying left them with no real life experience to carry with them to college and that they should break loose on the night before graduation by going to Nick’s party (Mason Gooding) where all the popular kids are having fun!  Well okay, it’s MOSTLY Molly saying this, but Amy wants to be supportive and hesitantly agrees to go along with this and might even talk to the cute girl she’s had a crush on for some time (Victoria Ruesga).  Sadly, no one bothered to give them the address before this huge revelation since… well they’ve never gone to one of their parties before so why would they now, and this means that they have to find someone who knows where it is and get the information out of them by whatever means necessary!  Can Molly and Amy find the party of their dreams and survive whatever wacky hijinks are waiting for them out in the real world?  Will this experience challenge their friendship like never before; possibly revealing longstanding issues that they’ve never allowed to bubble to the surface?  Is it just me, or do movies like this make you realize how much you wasted your own high school years?  And college years?
…
And most of your twenties?  Okay, maybe it’s just me.

“Wow… Tonight, we really ARE young!  Thanks fun.!”

WOW!  I had heard good things about this movie, but I did NOT expect it to be as great as it was!  This is fun, adventurous, and emotionally rich, which is why this is easily one of the best films of the year so far and might just be the most impressive outing for a first time director since Jordan Peele’s Get Out.  For wildly different reasons I’ll grant you, but the talent on display here is phenomenal and I enjoyed pretty much every minute of this movie!   We’re at a time where we’re quite spoiled for choice when it comes to solid or even great movies about high school such as The Edge of Seventeen, Love Simon, and I’ve heard good things about the movie Eight Grade, but even with so much strong competition out there I think this one finds its own unique niche and stands out as one of the best of the bunch! 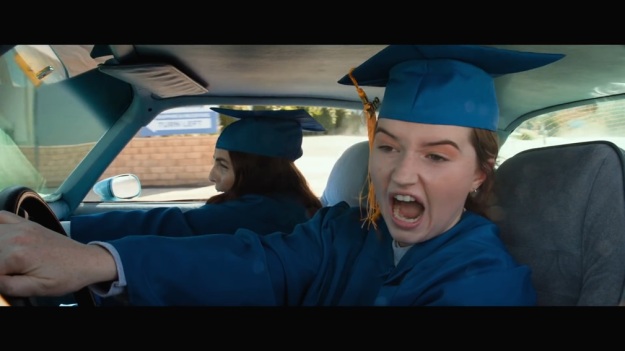 The movie’s setup is one that isn’t exactly UNIQUE, but is still a rock solid foundation for comedies like this; namely a journey that goes completely awry where the characters learn something about themselves along the way.  It’s such a common setup that Harold and Kumar were lamp-shading it all the way back in 2004, and yet we still see it used to this day which I’d say is a mark in its favor.  I mean even if the premise is rife for deconstruction, you can’t deny its effectiveness when used well such as with Superbad which this is in some ways a spiritual successor or even Dope from a few years ago which you all HAVE seen by now, right?  The scenarios in this movie are very well written and consistently hilarious, but what got me the most was the way that each of them ended.  Every time the due escaped a ludicrous scenario, there’s a moment of relief and genuine humor about what they just went through which I found rather heartwarming!  It was really pleasant to see characters that were enjoying what we the audience found amusing and how all of this was kind of what they wanted in the first place; an opportunity to cut loose and have some great stories to tell.  The connection to Superbad is somewhat tenuous with the only real thread there being that Beanie Feldstein is the sister of Jonah Hill, but it still manages to feel like the next evolution of that concept; similar to how the new Star Wars movies follow a lot of the same steps as the original trilogy but to a completely different beat, and that’s where this film gets so much of its strength.  Superbad, as absolutely hilarious as it is, perhaps hasn’t aged well in certain spots (the story beat about having sex while drunk elicit no small amount of cringe) and perhaps we’ll look back at this movie in a few years and realize some of the things it did which weren’t all that great (those last few bits with Jessica Williams as the teacher MIGHT have gone a little too far), but I always do find it encouraging when a filmmaker DOES take something and reinvent it for a modern era.  A lot of people whine and moan about how the SJWs or whatever are trying to CENSOR AND SHAME COMEDY which is total garbage, and (at least in my opinion) this is the kind of thing people are ACTUALLY talking about when they bring up problematic content in the past.  If we can RECOGNIZE and UNDERSTAND the problems of the past, we can make an even better product going forward.  The John Hughes movies of the eighties evolved into the great movies we have today, and this is the latest evolution of great comedies in the past which is something that I really appreciate about it. 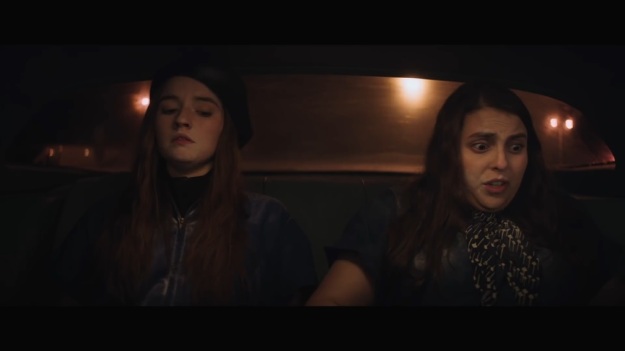 “I TOLD you these things always end with DRUGS!”     “Okay, seriously?  NOT HELPING RIGHT NOW!!”

On top of being a great example of a well-established comedy setup, the writing is top notch as the characters are ridiculously relatable and far more fleshed out than you’d expect.  Exaggerated to be sure, but there was a conscious effort here to give everyone relatable characteristics so that most of them don’t come off like overwhelming high school clichés.  There aren’t even any real antagonists to speak of  If anything, I found Molly to be the most villainous character in this while also being the most relatable which either says something unflattering about me or something positive about this film’s ability to portray characters as real flawed people.  Okay fine, it’s probably both, but in any case it keeps you invested in these characters and their struggles which in turn lends credibility to the story and gives it added weight.  I really did see a lot of myself in the two protagonists here with Amy’s shyness and difficulty in taking even relatively minor risks and Molly’s standoffish nature towards everyone else.  I’ve certainly been in their situation where I was more or less on my own with only one or so friends, but the key detail here is that it was no one else’s fault but my own.  The characters that Molly perceive to be jerks and beneath her are in fact pretty nice and don’t have a chip on their shoulder like she does.  I was never so bad as to think I was ABOVE everyone, but I did isolate myself quite a bit which in hindsight wasn’t necessary at all.  I probably could have gotten along with anyone in high school if I actually tried, and having Molly realize that, at least to some degree was an amazing turn in her arc that really got to me. 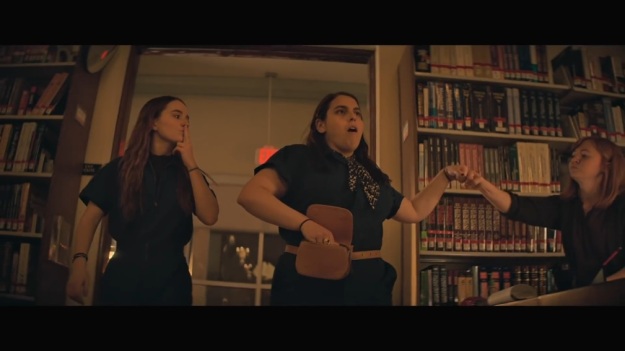 You ROCK that ascot!  You deserve it!

The only real flaw I could find with this movie is that its setup feels a bit truncated.  It’s almost as if this was originally supposed to be the final episode of a Netflix series and they decided to just cram everything else into the first twenty minutes.  There is quite a bit going on here and you definitely want to try and put everyone’s faces to a name since even the more inconsequential seeming characters will all be coming back later; but considering how great the payoff ends up being, it’s more than worth the effort.  The only places where I think they do stretch things a bit too far into incredulity is what motivates Molly to go to the party in the first place (it feels a bit silly and I would have preferred a more grounded inciting incident) and the character of Jared (Skyler Gisondo) who starts out WAY too far on the absurd side of things to reasonably end up where he does at the end of the night.  THAT’S the guy who feels like he jumped right of a Harold and Kumar movie (or maybe Superman IV as he reminds me a lot of Lenny Luther), and while he is absolutely hilarious and has some great moments throughout, he feels a bit out of place at the end of the movie with everything else that happens there.  There are two other characters in the movie that are more exaggerated than he is (Austin Crute and Noah Galvin), but because they STAY exaggerated throughout it works better than his turnaround.  That said, these characters are exaggerated in a way that I don’t think everyone will appreciate and may even find offensive.  I won’t dispute anyone who says that they are, but I certainly enjoyed their antics and thought they were fun an genuine rather than people the filmmakers wanted to frame as worthy of mocking.  Look, what I’m saying is that I wish I was at their party, alright!? 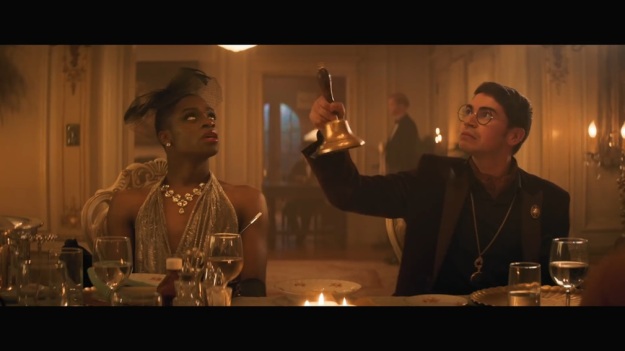 This movie spoke to me quite a bit which is why I’m certain it will end up on my Best Movies list this year, but it also means that it may not work as well for everyone else as it did for me.  I think it’s charming, hilarious, and poignant, but it IS working off a clichéd formula that not everyone is gonna be thrilled to see rehashed again, and there are a few flaws here and there that could be deal breakers for some.  Still, for what it’s worth, I couldn’t recommend this movie highly enough!  The cast is great, the story is great, and I want to see more from Oliva Wilde if this is she can knock it out of the park this well on her first try!  With her and Jordan Peele, I think we should start taking bets on which somewhat notable TV star will be the next big director, and I’m putting my money on… Lucas Till!  You know, that new MacGyver dude?  I’m sure he’s got something up his sleeves!