Oh hey!  I know this guy!  Yeah, didn’t he do that movie that everyone else liked but I was pretty nonplussed about?  Okay, probably have to be more specific there.  This is the guy who made The Cabin in the Woods (no not that guy, the guy who ACTUALLY directed it) which was an interesting idea but for me it suffered from a somewhat oblivious tone and an ending that soured me from ever really enjoying the film again.  Well after a few years doing quite a bit of writing, he’s back in the director’s chair with this film that looks to be a mishmash of noir tropes as opposed to horror ones, though he managed to keep Chris Hemsworth around.  Will this be the movie that sells me on the brilliance of this director after a somewhat disappointing opening salvo, or is this another guy who I’m just not gonna get and be a sourpuss about while everyone else is enjoying themselves?  Let’s find out!!

The El Royale is a hotel on the border between Nevada and California, once a hotbed of celebrity debauchery but now a shell of its former self; handing out cheap rooms to unscrupulous and impoverished characters who aren’t really here for the ambiance.  On the fateful day that this movie starts, there JUST SO HAPPENS to be quite a few people there who may or may not have nefarious schemes in mind, including the vacuum salesman Seymour Sullivan (Jon Hamm), the kindly Father Flynn (Jeff Bridges), the singer Darlene Sweet (Cynthia Erivo), and the mystery woman who signs the guestbook with an obscenity (Dakota Johnson).  Now normally they would just go their separate ways and not bother one another no matter what bad stuff they’re into, but what the concierge Miles (Lewis Pullman) isn’t telling them is that this place isn’t simply a rundown hotel; rather it’s a rundown hotel WITH A SPYING ROOM!  As each one of them goes about their business, things start to unravel as some discover this place and see what the others are up to which inevitably causes their stories to intertwine in ways that will either lead to fair and equitable compromises or an utter bloodbath; especially with the Mystery Woman having some serious baggage in the form of another mystery woman with her (Cailee Spaeny) and some dude who just might be looking for them (Chris Hemsworth).  Will these lovely guests manage to finish what they came here to do with all their limbs still attached?  What is each one of them hiding, and how important will it be to the other people there?  How the heck did hotel stay open this long!?  They’ve got ONE guy running the darn place!!

“This is NOT what I was promised on Yelp!”

Well this movie is pretty darn good!  It’s not reinventing the wheel or anything, but as far as the kind of movie it’s trying to be I think it’s quite spectacular and may just be one of my favorite films of the year!  There are plenty of twists and turns in the plot so going into a full breakdown of how it all worked for me would be veering a bit too close into spoilers, but you could probably tell just from the trailer what kind of movie this is which is somewhat of a strength (at least you know what you’re getting into), but since it’s not really doing anything new you can still see where it’s going pretty much right away even if individual moments can still take you by surprise.  Still that’s not so much a complaint as it is an observation of the type of movie this is which is very much in Godard’s wheelhouse if Cabin in the Woods is anything to go by.  The beats may be familiar and the story rather conventional for the genre, but in this we find a distillation of what makes other films it borrows from work so well as to make almost a greatest hits version of a movie.  Sure I tend to prefer an imperfect gem over a polished retread but that doesn’t mean that the latter isn’t without merit; especially when it’s done THIS well.

The movie is very much in the mold of other character driven bottle films from the likes of Tarantino (Reservoir Dogs, Pulp Fiction) and The Coen Brothers (Burn After Reading, Hail Caesar) with its perspective switching, dark humor, and criminal elements, and while it can feel a BIT like an imitation of those, well it’s hard to argue that we shouldn’t get even MORE films in that style that are this well made.  The El Royale is a great location independent of the story currently being told within it as the gimmicky premise and faux late fifties and early sixties classy aesthetic (a pie vending machine!?) which is a fitting façade over such a scummy operation that seems to have run out the clock a well.  It’s like visiting a medieval dungeon where tools of horrifying torture and death are seen as rather quaint outside of the context in which they originally existed and could honestly still cause quite a bit of damage if applied the right way.  The story itself comes from the cast of colorful characters who for whatever reason need to spend the night there, and while I do REALLY enjoy the narrative I think the movie tries a little TOO hard to be coy with it.  It’s not a particularly original or surprising story for the most part (if you have any familiarity with the genre you can call certain twists a mile away) and yet it takes a little too much time to get to the gut punches and shocking moments.  Sometimes it works as the time we take to learn about these characters pays off greatly by the end, but we probably didn’t need to watch John Hamm futz around in his hotel room for five minutes; nor did we have to spend another five minutes “taking in” the secret room that figures so prominently in the movie.  I mean sure it’s an important location, but we understand what it’s about within seconds while the movie just kind of spins its wheels for a bit.  That said this is a relatively minor issue to be sure as the story as a whole is fascinating and will keep you on the edge of your seat despite it trying a bit too hard to impress at points which is honestly as much a staple of the genre at this point as sympathetic criminals and total misunderstandings.

“I assure you there’s a VERY good reason for this!  Just watch my flashback!”

What works even more than the narrative which admittedly has a bump in the road here and there (at least for the first two thirds) are the characters; all of whom are wonderfully well fleshed out and played by a phenomenal cast.  I’m trying to think of the last time I enjoyed Jeff Bridges this much in a movie and I think I’ll have to reach as far back as True Grit to find a performance as great as the one he gives here.  Relative newcomer Cynthia Erivo is probably gonna give Lady Gaga a run for her money considering she not only can sing and act but has a screenplay that ACTUALLY knows what to do with her, Jon Hamm is… well he’s Jon Hamm, and the uneasy dynamic that Dakota Johnson, Cailee Spaeny, and Chris Hemsworth have is fraught with peril which is made apparent by their interactions with each other.  Even Lewis Pullman as the only employee at the place manages to stand tall among this very talented cast in a role that would have normally just been a throwaway or a joke, but the script does a good job of keeping him at just the right distance that it genuinely surprises you how much of the heart and soul of this movie rests on his shoulders and how well he manages to carry it.

“Which room would you say has the thickest walls?  Uh… so that I can… pray without disturbing these wonderful people?”     “Well we’ve got the Murder Suite still open.”     “Oh I’m sure it’s just a colorful inside joke!  I’ll take that one!”     “No, fifteen people have died in there.”     “Just give my damn key.”

This movie has a fantastic set up and a sensational cast to play wacky and engaging characters, but the big issue is that it feels like they jumped the gun a tad and started working on this before they had it all laid out.  With a plot this densely packed and executed with such clockwork precision, it’s almost criminal how the movie throws a good chunk of that away for a third act that more or less comes out of nowhere.  Now that’s not to say they didn’t foreshadow it or that the third act in and of itself is badly made; especially since this is the point where Chris Hemsworth takes over the movie and I genuinely liked his performance.  I’d even go so far as to say that it works better than a recent critically acclaimed movie I could mention that had similar characters in it (a film I can’t name to avoid spoilers) but even with so much going for it in terms of tension and the continuing stellar performances, it still feels a tad bit out of place.  What engaged me about the first two thirds of the movie wasn’t COMPLETELY absent, but the change in tone felt unnecessary and should have honestly been used for another movie entirely; one that wasn’t almost entirely predicated on the fact that good and evil are not so easily defined and that people can make either good or bad decisions out of desperation and greed without losing every last shred of their humanity.  To go in THIS direction that has SUCH a clear cut sense of right and wrong as well as introduce us to one dimensional caricatures feels like a step back from a much more focused and nuanced movie. 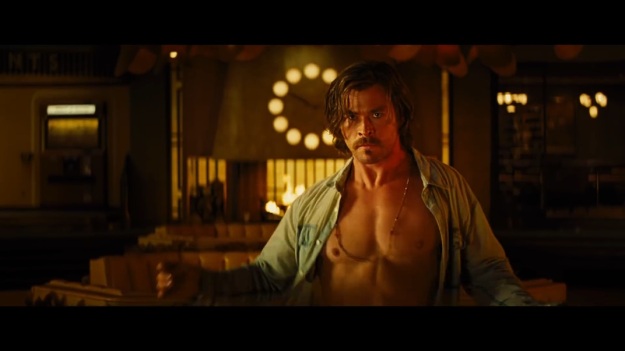 My favorite way of describing this movie is that it’s like Hotel Artemis if it was made by the director of Spotlight.  Now I love BOTH of those movies with Hotel Artemis also being a best of the year contender, but where that movie stumbled here and there to try and deliver something truly exceptional, this movie feels a bit too safe and controlled; preferring to polish what it had instead of reaching for the stars.  This is not necessarily a knock against the film as the sheer amount of precision in Spotlight is why it sticks in my head so much, but it does suffer a bit in comparison to the slightly more enjoyable Hotel Artemis because of that.  I still think this is one of the better movies this year and you should absolutely go out to see it, but only if you watch Hotel Artemis as well!  I don’t know why but it seems to be a REALLY good year for movies about hotels which means that next year we’ll be getting a bunch of really bad ones.  Anyone else ready for another Hostel sequel?  Oh, a Shining remake!  Now THAT’D be something worth seeing!  Not for the right reasons, but I know I’d watch that train wreck opening night!