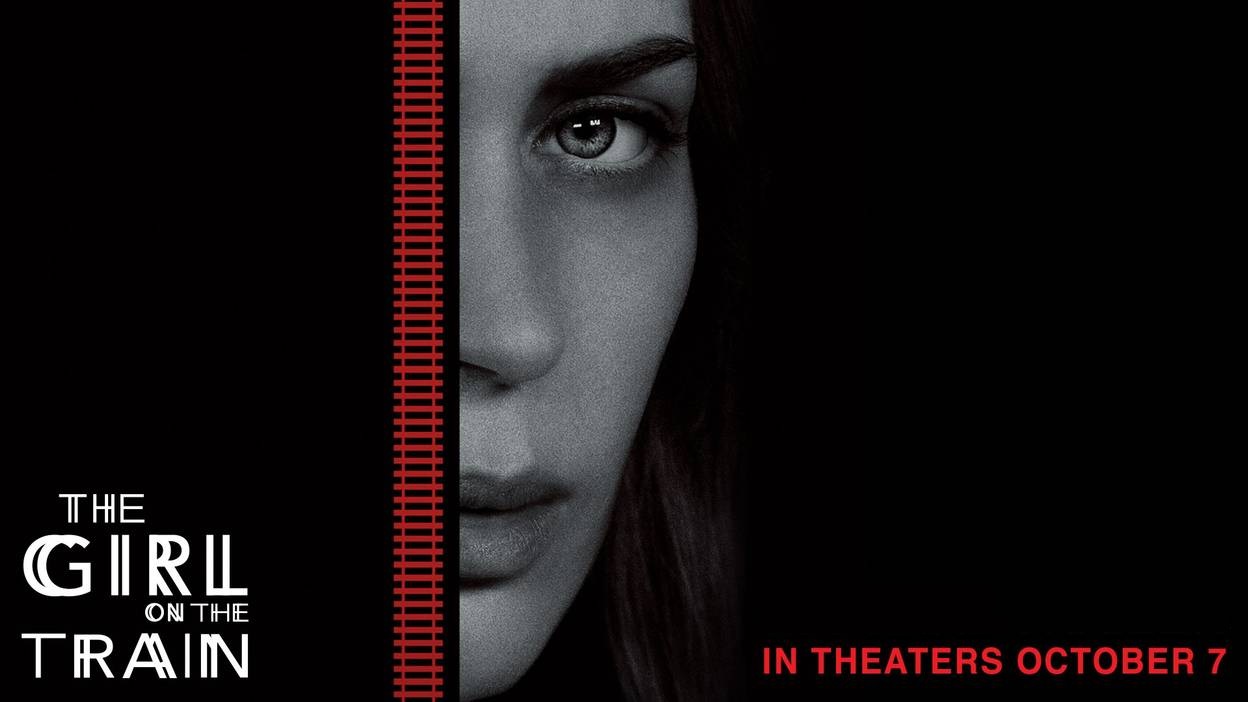 The only thing I knew about this movie before walking in was that the trailer had probably the most baffling musical choice imaginable.  Seriously, who the hell puts Kanye West in the trailer for a movie that we’re supposed to take SERIOUSLY!?  If you can somehow tune out the poor choice of music (how is the WOMAN heartless when she’s the one who gets MURDERED!?) there is something intriguing about the premise and it’s the perfect time to release these kind of dark murder mysteries now that Oscar Season is upon is.  Is this an early contender for best of the year status, or is this a wannabe Gone Girl knockoff that’s simply jumping on the bandwagon?  Let’s find out!!

The movie begins with Rachel (Emily Blunt) as the titular girl on the train as she passes by the same sight she sees every time she rides it.  Every day, the train stops right in front of these two houses; one has her ex-husband Tom (Justin Theroux) and his new family, and the other has this couple who from all outward appearances looks perfectly happy.  This routine goes on for some time until one day she notices a new man in the house with the woman Megan (Haley Bennett) which shatters Rachel’s already fragile mental state (for various reasons, she’s crawled inside a bottle for the last few years) and she gets even MORE drunk than usual that night and gets off at the stop that’s close to their house.  Jump to the next morning and Rachel wakes up in her room; covered in mud, blood, and booze with no explanation of what happened the night before.  Eventually, it turns out that Megan has disappeared (which means she’s dead but they haven’t found the body yet) and no one knows what happened.  Rachel seems to have an idea, but the memories of that night are so fried that she can’t piece them together and feels compelled to save this woman who she’s been watching all this time… and if she can also throw some shade at her ex-husband’s new wife Anna (Rebecca Ferguson) in the process, well then that’s just brownie points.  Can Rachel find out what happened to Megan and find some sense of self-worth, even in her completely debilitated state?  Who was this woman that’s gone missing, and can her past lead us to the reason she was murdered?  Can we all just agree to give Emily Blunt the Oscar now!?  It’s basically Leaving Las Vegas 2!!

There is so much to like about this movie that it’s kind of frustrating when it doesn’t quite come together in certain places which makes it very reminiscent of No Country for Old Men because of that.  Both movies, at least in my opinion have a fatal flaw in how they present their story to the audience and what they decide to focus on or what they decide to leave out.  With No Country for Old Men, it was the lousy ending where the Coen Brothers decided that the audience perspective needed to be shifted from personal (Josh Brolin) to observational (Tommy Lee Jones) right before the main character got to the climax of his story arc.  Here, the movie tries to split the focus between three different characters when only one of them I felt was truly fascinating enough to carry the movie.  Haley Bennett and Rebecca Ferguson are great in their roles and are absolutely vital to the story, but the real star here is Emily Blunt who’s alcoholic and emotionally devastated Rachel is a phenomenal character and always fascinating to watch on screen.  The way the movie plays out, I understand why the movie wasn’t entirely from Rachel’s point of view, but I feel that there’s a missed opportunity there by not going in that direction as it’s easily the strongest aspect of this movie.

At its strongest, the movie came across like an old school Film Noir with all the romanticism stripped out which is a fascinating idea and SORT OF what The Nice Guys did; only they took a humorous approach to it while this takes a devastatingly dark and emotionally draining one.  Whenever Rachel is on screen, the camera is uncomfortably close to her face so that we’re always aware of her current mental state (a testament to Emily Blunt’s acting), which makes us feel that much closer to her internal struggles as she tries to solve this external one.  She’s not a competent detective and she can barely function when she ISN’T trying to solve a murder, but rather than detract from the intrigue (why can’t she get this right so we can move on to the next clue!?) it only enhances it.  I’m reminded of Roger Ebert’s review of Munich where he observes (and I’m paraphrasing here) that a race against time only gets more intense if we’re following an awkward older man rather than an Action HeroTM, and I feel the same principal applies here.  The demons she needs to work out are just as interesting as the mystery of who killed Megan, and watching one conflict with the other manages not to drag the movie down because of how well both elements are handled and how much Emily Blunt puts into the performance.

Where things unfortunately start to get dull is… well any scene that DOESN’T have Emily Blunt in it.  We follow the two other women who are connected to this story, including the dead woman Megan so all her scenes are flashbacks and they’re the hardest to sit through.  I just did not find her compelling or interesting in the least, whether it’s her past traumas, her current issues with sex and relationships (I’m guessing she has sexual addiction especially when all this dialogue they’re giving her and all the backstory we’re getting is pretty much a moot point as they don’t inform the rest of the characters’ actions or even have a strong connection to the killer.  If this woman’s backstory was COMPLETELY different and they only kept a few details about her, it could have worked just as well for the purpose she serves in the story and considering she has SO much screen time (more so than Anna and probably equal to Rachel) it feels like wasted potential.  Anna’s not THAT much more interesting, but she directly affects the plot and is very closely tied to Rachel’s story.  I didn’t mind her as much as Megan because she served a purpose other than being a plot device, and her story feels more naturally intertwined than the repeated and extended flashbacks that it takes to tell us all about Megan.

To give the movie credit, it makes sense that it’s structured this way even if I would have preferred if we never left Rachel and her story.  Because Rachel is so out of it for most of the movie, she can’t discover plot details or clues to the mystery in a speedy or efficient manner, lest you’d be making her debilitating alcoholism not look so debilitating.  Therefore, they decided (or maybe the author of the book this is based on decided, if that is similarly structured) that the audience needs to stay one step ahead of her so that the plot can keep moving along even if Rachel isn’t really getting anywhere.  Now I would argue that the mystery isn’t nearly as interesting as Rachel (by the law of Conservation of Characters, it’s pretty easy to figure out the killer by the half-way point if they weren’t your first guess initially) but if we HAVE to focus on it, then the cutaways to other characters do keep things moving.

On top of the strong performances from our leads (especially Emily Blunt) and the fascinating premise, the movie is very well shot and does a great job of distorting reality just a tad whenever we’re up close and personal with Rachel.  It’s not Fear in Loathing in Las Vegas levels of impairment (that tending to go for hyper-stylism for humorous effect), but the extra effort they took to drown out certain people, angle the camera in certain ways, and even lose focus in the scenes gets across the warped reality that she has to suffer through just to get by on a day to day basis.  My only issue is that they could have gone a bit further with it and gave the other two characters their own distinctive style whenever we were following them.  Everything still looks the same when we’re with the other characters (washed out, dark, bleak) only the camera doesn’t act drunk.  Then again, everyone is kinda miserable in this, so the uniform tone is probably for the best even if it was another example of two thirds of this movie being a weaker version of that one spectacular third with Rachel.  It’s also worth pointing out that we have three male leads in here as well, namely Justin Theroux, Luke Evans, and Edgar Ramírez, but I honestly wasn’t all that impressed with them; especially when compared to the performances we got from our female leads.  They basically exist as red herrings for the mystery so they don’t have as much to do as the woman, but I didn’t think the actors did a bad job.  They just weren’t very compelling in roles that felt a bit perfunctory.

There’s a lot to like in this movie, but it’s all overshadowed by Emily Blunt’s fantastic performance and all the elements that surround it.  Unfortunately, there’s still another hour of the movie they have to fill, and while they do an admirable job here, it’s just so obvious where all the best moments are.  Emily Blunt should honestly be up for an Oscar considering how great her performance is here, but other than that it’s probably not gonna be one of the best films of the year.  I absolutely recommend you go see this movie because of her performance alone, but if you wait for a home release… well at least you can fast forward through the boring parts.

The Girl on the Train (Blu-ray + DVD + Digital HD)