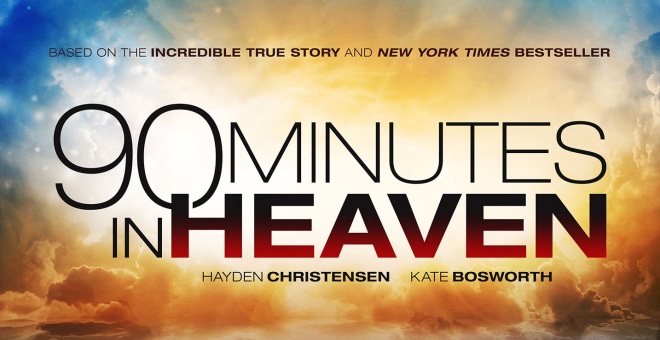 Do we really need another one these?  I mean War Room came out less than a month ago!   How much must I suffer for my work!?  Ugh, well at least this one has actual actors in it what with Hayden Christensen, Kate Bosworth, and even Fred “not President” Thompson being present and accounted for.  Is it possible that this movie is better than the last overly Christian movie I had to sit through?  Well probably yes considering how unforgivably awful War Room was, but then again we should never believe that we’ve hit the bottom of the barrel.  Anyway, let’s find out!!

The movie is about Don Piper (Hayden Christensen) who is a small town pastor in 1989 Texas with the perfect kids, the perfect wife, and the perfect life.   On his way home from a seminar, God shows the wholesome bastard what he thinks about his oh so idyllic life and sends a fucking semi to teach his sorry ass a lesson.  The pastor is pronounced dead once the paramedics take a single look at the metal heap (I think they check his pulse, but they’re doing so from outside a crushed car and they only check his carotid), but this one dude just roles up on the scene and decides to pray for the man who just died which apparently involves him climbing into the car, putting his hand on his shoulder, and singing a hymn on top of whatever prayer he felt appropriate for the situation.  The dulcet tones of the passerby seem to rouse the dead man from his eternal slumber as he starts to very weakly sing along.  Now that it’s clear that the man is not as dead as he could be, can he still be saved despite the massive injuries he incurred?  How will his family cope with the tragedy thrust upon them as well as the inevitable financial fallout?  Did something happen to Don while he was dead that’s probably spoiled in the title!?

I did not particularly like this movie, but I respect the hell out of it.  At least compared to the abysmal and morally bankrupt War Room, this movie has a nuanced and un-judgmental view of faith and Christianity that I appreciated.  Now it’s not PERFECT in that regard; it definitely leaves little doubt as to what the movie feels is the CORRECT perspective, but the fact that it at least left room for ambiguity is nearly a miracle in and of itself and makes it leagues better than the straight up deceitful (which I’m pretty sure is a sin) War Room.  I’ve only recently started watching everything that comes in theaters so I got to avoid a lot of the other Christian movies that have been coming out, but from what I understand a lot of them go down the War Room route which is a shame considering that a movie about Christians doesn’t HAVE to be disgusting and distasteful.  I’d personally prefer more movies like Noah which gave unparalleled beauty and craftsman ship to one of the Bible’s most recognizable stories, but then that’s not really a story about Christianity and Christians in the same way a movie about Hercules isn’t from the perspective of Polytheism.  I guess this feels closer to what that audience SHOULD be asking for, but considering how much garbage like War Room and God’s Not Dead make, I don’t think anything less than bullying and righteous fury will satiate Middle America’s thirst for validation of their beliefs.

So this does indeed exceed my expectations in that one area and can definitely be considered a movie rather than straight up propaganda.  As a movie though, it’s frankly a boring and glacially paced slog that feels more like a documentary dramatization that got out of hand.  It has a very narrow focus which admittedly is something you need for smaller character driven films, but what the story is actually about is pretty mundane.  The movie begins with the crash and ends with him being able to walk again a year later.  That’s it.  Most of the movie is Hayden Christensen bloody and broken (which Star Wars fans might get a kick out of for about a minute) with various people in his life coming by to wish him well.  His wife is there all the time.  His kids visit when they can.  We see her parents a couple of times and then his parents once.  Oh, and there are a bunch of his friends from church to see him too.  Now imagine that taking about an hour in this film.

The movie is just a drag and never feels like it has a reason to exist, even as a weak sauce version of Christian propaganda.  There is some internal conflict brewing inside Don throughout the movie as he becomes more and more depressed during his recovery, but it doesn’t hold any weight.  Much like his injuries, these feelings are born from the accident and we have no reason to doubt that he’s going to feel much better once he recovers and can take care of himself again.  It’s a true story so they can’t really stray from what happened, but this is a character without any significant character flaws other than the dumb luck of almost dying.  Not being killed just isn’t enough characterization for a character who’s supposed to be the heart of the film which is just another strike against this movie which is way too slow to begin with.  His injuries also never come across as life threatening after the first night which granted is probably accurate to the true story (though I would have killed to see Dr. House brought in to resolve some mysterious illness) but there us zero drama here to hold you attention or keep you feeling tense, whether due to his internal struggles or external ailments.

The third act does pick up a bit as he goes from being a moaning lump to being a semi-ambulatory wreck, and he has some struggles there that are a bit more cathartic to see him overcome.  Watching him take his first step, watching him very carefully dance with his daughter, even getting his ass stuck to a toilet because the machinery in his legs got lodged in the porcelain.  It’s only about ten minutes out the movie, but compared to the never ending trudge of the first two thirds, I’ll take it.  It also comes around to his trip to Heaven at the end which at least gives a bit of visual flair to the film, but it’s also a really lame interpretation.  Oh look, it’s all the people you knew who are dead now.  Their wearing suits too!  Isn’t Heaven ever so grand?  Blech.  I guess I can’t argue with what the real guy supposedly saw, but that doesn’t mean it’s interesting to watch Hayden Christensen droll on about it for what felt like an eternity. At least the ending kind of brings it together with Don’s defining moment not being that he went to Heaven, but that he now has a level of empathy that might have been lost on him before.  He sees someone else who was hurt like he was (not as badly though) and actually gives comfort to him.  At least that’s how the movie part of the movie ends, because after that the real Don Piper has a five minute sermon straight to the audience about his experience and what it taught him.  Eh… I’m probably a bit too forgiving of this movie purely based on my hatred of War Room, but it’s still a MUCH better ending than the one in that film which was a horrific bit of drum beating for the lowest common denominator of Christian entitlement and ignorance.  Don Piper seems like a legitimately nice guy and my five minutes of research didn’t turn up anything fucked up, so while I’m certain that the dude was simply capitalizing on his own misfortune like so many others (*cough* Todd Burpo *cough*), his message at least wasn’t antagonistic or even that rabble rousing.  Seriously, fuck War Room.

So what does that leave us with?  A boring movie with occasional moments of sincerity that manages not to push an awful agenda and therefore gets brownie points from me simply due to my low expectations.  Is there really anything here that’s good throughout?  I guess the acting is decent with Hayden Christensen doing a decent job (even though he comes off like a watered down James Franco) and Kate Bosworth being the highlight.  She has the meatiest role in the film as the silently suffering wife of Hayden Christensen who has to deal with the brunt of the problems that this tragedy caused her family and what works about it is how much emotion she can get across simply by trying to remain calm and collected.  I didn’t think she was good at first because of how much she was holding back, but I eventually realized why she was playing it that way and it ended up clicking for me.  I also find it kind of funny that she’s playing this Christian woman with a strong will and big heart when the last thing I saw her in was Homefront where she played a meth head.

I still don’t recommend this film because it’s a dull piece of nothingness, but I also don’t hate it.  It doesn’t offend me like other movies have, and that includes films OTHER than War Room (*cough* Pixels *cough*) so at least it has that going for it.  Kudos for not making garbage.  See if you can make something enjoyable too.

One thought on “Cinema Dispatch: 90 Minutes in Heaven”