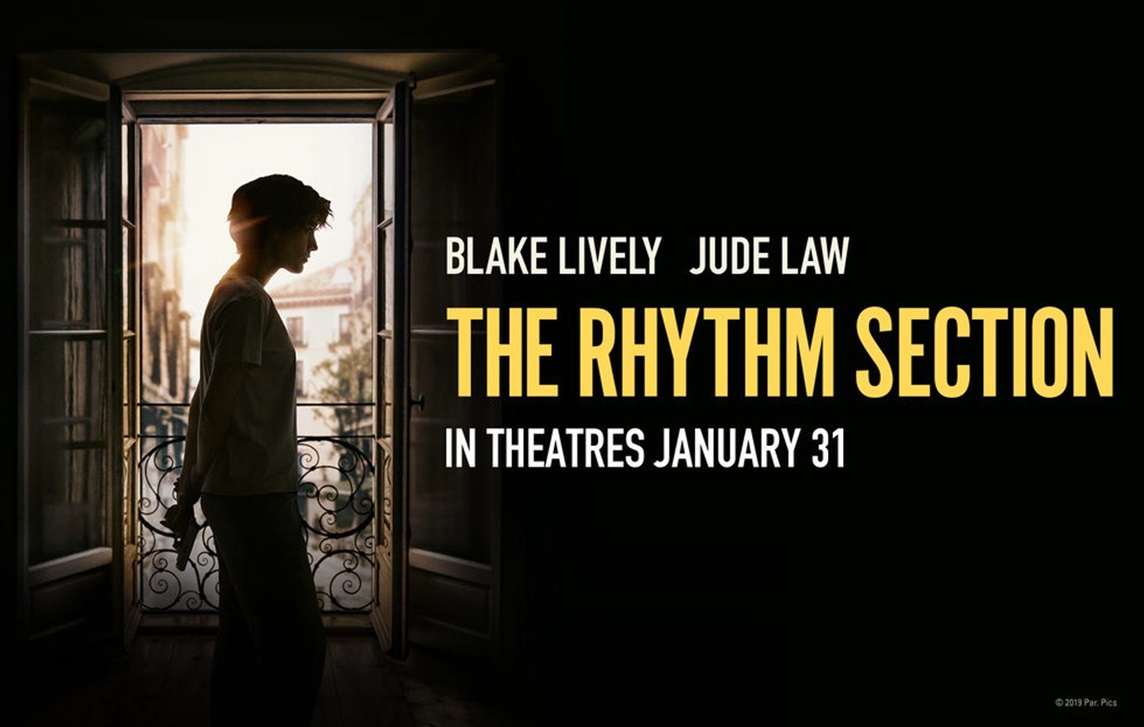 One of the unique selling points of this movie is that it’s produced by EON productions, and this is pretty significant considering they’ve only made four other films that weren’t in the Bond Franchise since its inception way back in 1961.  Now I love me a good Bond film and they have certainly been some really good ones in the recent past (Spectre notwithstanding), so seeing their logo on a film is intriguing if nothing else; but sadly the reason I can focus so much on a production company is that there’s simply not much else about this movie that’s catching my eye.  It looks way too much like other films I’ve seen in the last few years like American Assassin and The Foreigner; all of which span the range from nothing particularly impressive to outright terrible.  Can this latest spy thriller manage to rise above its peers with the help of the Broccoli family, or is this yet another dime a dozen spy films that won’t have even half the shelf-life of the worst Bond film?  Let’s find out!!

Stephanie Patrick (Blake Lively) has gone through a rough patch in her life.  She was doing alright, but then her entire family died in a plane crash that may or may not have been terrorism (pretty sure that’s the first thing the government would figure out, but whatever) and has spent the last months in a spiraling depression.  No home, no job, working as a sex worker because I guess that’s what grieving people do (did she not have friends or even second cousins that didn’t die?), but an unspeakable rage has built up inside of her that must be satiated by VENGEANCE!  Fortunately a reporter (Raza Jaffrey) comes along and tells her exactly who the bad guys are and where to find them, so she tries to shoot the terrorist in the face but blows the opportunity instead of his brain matter; leading her to be in even more danger and getting the reporter killed in the process.  The only hope left is the reporter’s source which is an ex-MI6 agent known as B (Jude Law) who begrudgingly agrees to train her so that she can take revenge PROPERLY next time.  Will she be able to train her body to be a perfect killing machine and finally exact vengeance on those who murdered her family?  What twists and turns will throw her off her path as she learns more and more about the complicated network of spies, extremists, and opportunists that facilitated the attack in the first place?  I mean I’m PRETTY sure she can pull this off!  She already fought off a shark, so how hard could this be!?

Perhaps I’m just not the right target audience for something like this, but I found everything about this utterly insufferable.  The narrative is convoluted but not in a particularly interesting way, the characters are rather one dimensional but take on the affectation of depth and meaning, and the sour tone of the whole thing just reminded me that I could be watching a FUN spy movie like Skyfall or Diamonds Are Forever.  I can see what they are going for here and it certainly addresses trauma by way of spy craft in a less sleazy manner than Red Sparrow, but there’s a real disconnect between what it THINKS it’s trying to be and what it’s actually accomplishing; eschewing the more lighthearted aspects of the genre to lend gravitas, but not narrowing in on the characters enough to make their misery more than just uninteresting window dressing to yet another bog standard spy film.

The big problem with this movie is that it’s absolutely no fun to watch which isn’t necessarily a deal breaker for SOME films, but it certainly is here.  For as much as the film wants to be about the main character, I just didn’t have much connection with her or had any real investment in her journey the same way I do with other characters like James Bond Ethan Hunt, or even the version of Lisbeth Salander in The Girl in the Spider’s Web; a movie that does quite a lot of the same things as this film but much better.  The tragedy she endures that spurs her on this journey is all the character has going for her, and it’s not even that viscerally compelling of a tragic backstory.  For something like this where we’re getting genuine thrills and set pieces, you want something in the main character’s past that INFORMS their future but doesn’t comprise the entirety of their being.  Heck, even Batman with all his silly comic book baggage is still a more nuanced character than what we get here, and those nuances (him being a great detective, his ironclad vow to never kill, his complicated relationship to Selena Kyle), are what make him more than just the MY PARENTS ARE DEAD guy.  I THINK Blake Lively was a med student before her tragic backstory, but that doesn’t inform anything that she does throughout the movie.  She never uses her knowledge of human biology or medical training to give herself any great advantage in her missions.  No, she’s a blank slate going in covered in frowny face post it notes; going through the motions of a plot that is pretty trite as well with the tragedy and implied cover-up skirting RIGHT up to the point of Islamaphobia.  I don’t know about you, but creating an utterly farcical scenario where European governments WOULDN’T be actively trying to exploit a tragedy caused by Muslim extremist for laughably simplistic reasons is the kind of nonsense that fuels Brexit scumbags conspiracy theorist (“WE’RE BEING OPPRESSED AND PERSECUTED FOR THE SAKE OF BROWN PEOPLE’S FEELINGS!!”) as well as the ongoing immigration crisis around the world.  Its’ completely unnecessary on top of that since the plot is utterly secondary to everything else going on, but since ISLAMIC EXTREMIST is Hollywood shorthand for GRITTY SPY FILM BAD GUYS nowadays I guess they felt the need to tick off that box to make this a “more believable” scenario.

Maybe I’m just looking at this from the wrong perspective, but it’s not enough of any one thing to justify most of what it’s trying to do.  It’s SO miserable in its portrayal of this character that you simply don’t WANT her to be doing any of the things that she’s doing and it warps the framing of what we’re seeing.  Say what you will about James Bond, and there is a lot to say, he’s not doing what he does out of revenge; it’s his job to be a spy, to take on the risks, and to face the chance of death in service of his mission.  The key is that the character we are following through these dangerous situations should WANT to be doing this; whether it’s for entirely selfish or greatly noble reasons.  Yes, revenge is a decent motivator for any number of stories like this, but she’s not looking for revenge; she’s dealing with grief and throwing herself into something she is not in the right state of mind to be doing.  Imagine you’re watching someone do the most impressive dance routine you’ve ever seen and at the end of it you are compelled to cheer for the spectacle you have seen.  Now imagine that same scenario but the dancer is crying and someone off stage is screaming at them the whole time.  No matter how impressive the routine is the suffering of the person doing it robs it of any real enjoyment, and that’s what it’s like watching this movie as she miserably does some routine spy work, miserably trains to be a good spy, and miserably does some more routine spy work albeit more competently this time.  Unlike Lisbeth Salander in The Girl in the Spider’s Web who ALSO has an incredibly tragic backstory and has to suffer greatly throughout the movie, she has made a conscious choice to lead her life in this way and she clearly gets a measure of satisfaction for doing it.  You get no satisfaction watching Blake Lively put herself through misery and pain to reach a goal that frankly will in no way satisfy her or you as the audience, so why are we even watching it?

So is there ANYTHING good about this movie!?  I mean… I guess Blake Lively is doing alright with the role she’s given even if her character is in the absolute wrong movie, and Jude Law is always good in whatever he does.  There are a few flashes of self-awareness that feel a bit forced but certainly lends a shade of gray to an otherwise straightforward moral through line.  Uh… the action is fine I guess?  It’s far from the first film to use claustrophobic camera shots while lots of action is going on around it, but the car chase about halfway through the movie did catch my interest at a point in the film I was ready to fall asleep, so there’s that at least.  It looks pretty, it’s got a decent score (though some odd soundtrack choices that indicate levity despite the film having none), and there’s no real incompetence in how it’s put together, but it’s ultimately a whole lot of effort for something that just doesn’t work in any meaningful way.

As much as I didn’t enjoy watching this movie, there’s just not enough to it for me to truly hate it like Red Sparrow or some of the more abrasive films I see in this vein.  It has its moments where the action works and I can point to a few moments where it feels like they MIGHT understand what they’re doing, but beyond any of the issues I have with this film, it’s simply way too boring to recommend to anyone.  I’d tell you not to see this in theaters, but chances are you already haven’t as this thing is making record low numbers at the box office, but don’t even see it when it gets a home release.  When there are SO many better movies to choose from like The Girl in the Spider’s Web or the latter Mission Impossible films, there’s just nothing this movie does that’s unique or interesting enough to warrant seeing it instead of watching anything else.  EON has had a rough go of it lately with Skyfall being their peak eight years ago, and if this film is any indication of where they plan on taking James Bond going forward, then maybe we should give Columbia Pictures or Warner Bros another crack at it.  Heck, just give it to Rare and see what THEY come up with!  Sure they’ve never made a movie and their track record is spottier than most, but I’ll take it over this movie!