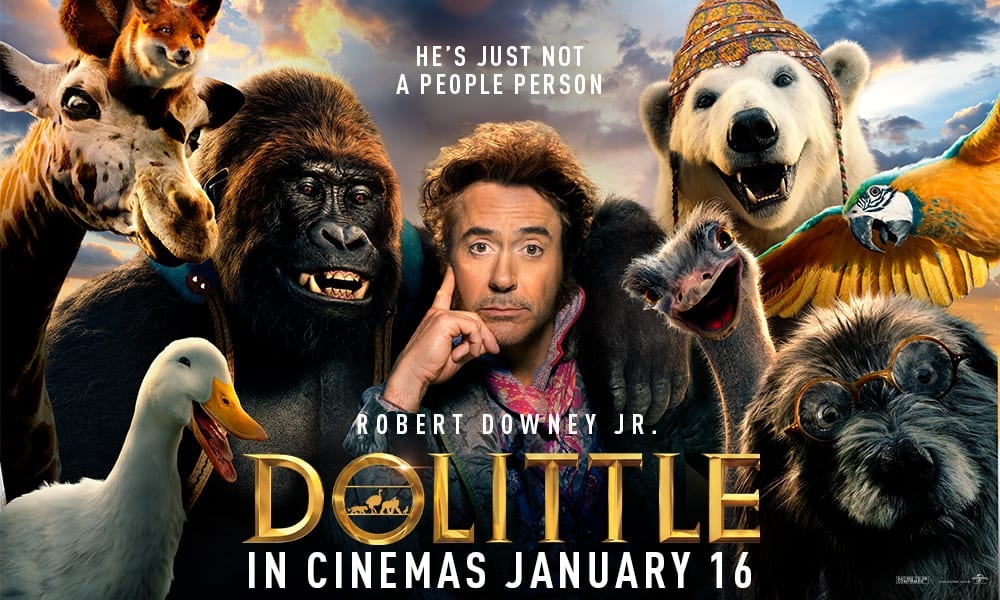 My GOODNESS have studios been putting out some high priced nonsense recently!  We are definitely stuck in the Billion Dollar Blockbuster Bubble where every studio wants nothing but the most expensive movies to maximize their profits, but as is the nature with bubbles all the money Is usually dried up by the time everyone else tries to get in on it which is why Disney is still sitting pretty on their mountain of gold and everyone else is making stuff like Cats and that awful Tarzan movie.  With this being the current trend, someone making an overpriced adventure film about Dr. Doolittle feels almost inevitable, but that doesn’t necessarily mean it’s going to be bad!  I LOVE me some overpriced entertainment like Jupiter Ascending and Final Fantasy XIII, so maybe Dr. Doolittle being played by Iron Man and co-starring a wrestler as a CGI polar bear is just what I need to cleanse the palate and finally kick off the GOOD parts of 2020 which so far has been pretty plodding at the multiplex!  Is this retelling of the classic story the start of another beloved blockbuster franchise, or are we in for a disaster to rival even that of Cats!?  Let’s find out!!

Taking place AFTER what I presume is the actual Dr. Dolittle story, we find that the intrepid physician who can talk to animals (Robert Downey Jr) has gone fully Will Wonka and is holed up inside his giant wildlife preserve; refusing to see any visitors, human or otherwise.  That all changes when one day, out of PURE LUCK, he gets TWO visitors who insist on seeing him!  The first is Lady Rose (Carmel Laniado) who is on assignment from the Queen despite being all of twelve years old, and Tommy (Harry Collett) who shot a squirrel and has brought the wounded creature to Dolittle because he feels bad.  Lady Rose is there to inform him that the Queen is dying and requires his help which he reluctantly agrees to, and determines that she’s dying of McGuffin’s Disease which can only be cured by a fabled fruit on an uncharted island, so he takes some of his animals friends (Emma Thompson, Rami Malek, John Cena, Kumail Nanjiani, and Octavia Spencer just to name a few) on a boat to get the fruit and save the Queen; hoping that once this is finished he can go back to brooding in his house all day.  Oh, and Tommy is coming along too because… he loves animals too I guess?  Will the Dolittle Crew get to the magic fruit in time to save the Queen?  What challenges will they face along the way, and will some of it be intentional sabotage?  If one of the cats from Cats was in this movie, would Dolittle be the only one who could talk to it!?

This movie is NOT Cats.  It’s not GOOD, but what sets Cats apart from every other bad blockbuster is that its bad decisions are seemingly inexplicable which lends a sort of delirious splendor to the baffling vision that the filmmakers were committed to no matter how obviously poor it was.  This is bad, but for really boring reasons which isn’t nearly as fun.  Kids like talking animals, celebrities make money, and people still like the IDEA of Jack Sparrow despite those movies becoming utterly unwatchable, so making a Pirates rip off for an even younger audience makes a certain amount of sense.  It at least makes more sense than looking at the musical Cats and thinking that it’s not horny ENOUGH.  The execution is the key to this film’s failure as no one seems to have taken charge and everyone from the writers, actors, and even the CG animators are all off doing their own thing on Universal’s dime.  It’s a train wreck of a movie, and while there is SOME entertainment to be extracted because of that, it’s more of a slog than anything else.

The first thing that’s made abundantly clear right out of the gate is that the movie’s plotting and world building is an utter mess.  If you’re like me and know absolutely nothing about Dr. Dolittle outside of the Eddie Murphy movie, then you’re out of luck because they speed through his backstory in the first five minutes; most of which I’m not even sure was from the source material.  Was Dolittle a Doc Savage like figure who went on high sea adventures and fight pirates with his adventurer wife?  I have no idea, but it comes off as an embellishment if nothing else considering how unnaturally it all tries to fit together in the movie.  We cover far too much ground in the first act of this movie where he goes from being a shut in, to being a doctor, to being on a boat, without any real character moments from the guy!  He’s all affectation and no substance, which MIGHT have been passable if the other characters carried the rest of the movie but they don’t.  The kids aren’t all that interesting and the animals are just as one note as the doctor himself, so it basically devolves into a road trip movie without any sense of flow, escalation, or growth for our characters.  I’m also a bit unclear on the mechanics of this world as the animals may not be able to speak to humans but they can ALL speak to each other meaning that the humans are the ones that are slacking!  Not only that, but they gesture and have body language that communicates almost as well as their spoken dialogue, and they are just as intelligent as we which makes it hard to believe that this takes place in our world and would therefore make Dolittle particularly special due to his abilities.  Heck, the movie itself seems to not think that his ability to speak to animals is all that peculiar since the kid tagging along with him just decides to start learning animal languages as well which means it’s a taught skill and not an innate ability… I guess?  Frankly the movie is rather uninterested in answering these questions as much as it is finding room for more jokes and more mediocre set pieces; all of which makes this feel like a ho-hum theme park ride rather than a cinematic journey.

But you know; take a step back and you can ALMOST see what they were going for.  We’ve kind of gotten to the point where live action kids movies have ceased to exist as kids either get animated films or they have to share the PG-13 stuff with their parents.  Okay, the Disney Remakes have been PG for the most part, but again that’s not really aimed at them as it is the older people in the audience who are there for the nostalgia.  To that point, this seems to be trying to fill that lost niche and is in fact a very childish movie.  The plot is paper thin, the villains have absolutely no menace, and there’s a pretty big fart joke at the end that did absolutely nothing for me, but could it be that I’m just too old and grumpy to enjoy that kind of thing?  Perhaps that was the case and I could have grooved on that wavelength here, but the problem with that is just how inconsistent the tone is.  I have no idea what RDJ is doing with his performance here as his affectations come off like a socially isolated weirdo who whispers and grumbles all his lines, but I would assume this is all supposed to come off as silly to the target audience… except that it also comes off as a symptom of his crushing grief (and possibly even PTSD) brought about by the death of his wife.  This is constant throughout the movie where the silliness is interrupted by rather trite but serious minded melodrama and even the occasional stab at excessive violence.  With all these disparate parts jumbled together, it’s more likely that they weren’t conscious making a film aimed at a younger audience; rather they were just bad making a film that would appeal to all ages.

I didn’t hate everything in this movie, and there are a few good things here and there that kept me from tuning it out completely.  Kumail Nanjiani is going to end up in the WWE someday, and not just because he got super swole!  He seems to have a darn good rapport with wrestlers as he and John Cena playing an ostrich and polar bear respectively have a solid amount of chemistry throughout and got me to actually laugh a few times.  I also thought that Michael Sheen, for how little he’s actually given to do, approaches his role as the villain with gusto and certainly rises above the material given to him.  Seriously, this dude is one of our more underrated character actors and should really be above doing this kind of material even if he’s one of the best things about it.  Other than that, I don’t really know what else is worth praising.  Antonia Banderas is fun, but the plot cul-de-sac that his character shows up in is a total drag.  It’s kind of surreal seeing Jason Mantzoukas as a straight up CARTOON dragonfly when all the other animals are drawn in a much more grounded and realistic style, but he’s not given good material here so it’s kind of a waste.  There are SOME interesting little surreal moments where the dialogue hits the right note of self-awareness, but there’s just nothing deep enough about the material for something subversive to thrive in.

At its best the movie can be a bit of campy fun, but you have to sit through a lot of boring and poorly thought out nonsense to experience any of it.  This is not the next MIDNIGHT MOVIE PHENOMENON, nor is it particularly noteworthy as a bad film outside of its price tag.  It’s not a particularly long movie as it doesn’t even get close to two hours, but it still felt like I was sitting in that theater for an eternity so I wouldn’t recommend seeing it that way.  AT BEST you might want to check it out when it gets a home release if you can’t be persuaded away from seeing every bad movie out there, but this one will wear thin pretty quickly for anyone other than the very young or the very determined.  Maybe RDJ couldn’t launch ANOTHER billion dollar franchise, but you know what would work?  Chris Evans in a remake of Bambi that’s more accurate to the book!  Or maybe get Chris Hemsworth and Tom Hiddleston for a gritty adaptation of Frog and Toad are Friends!  Oh, how about Scarlett Johansson as Amelia Bedelia!?