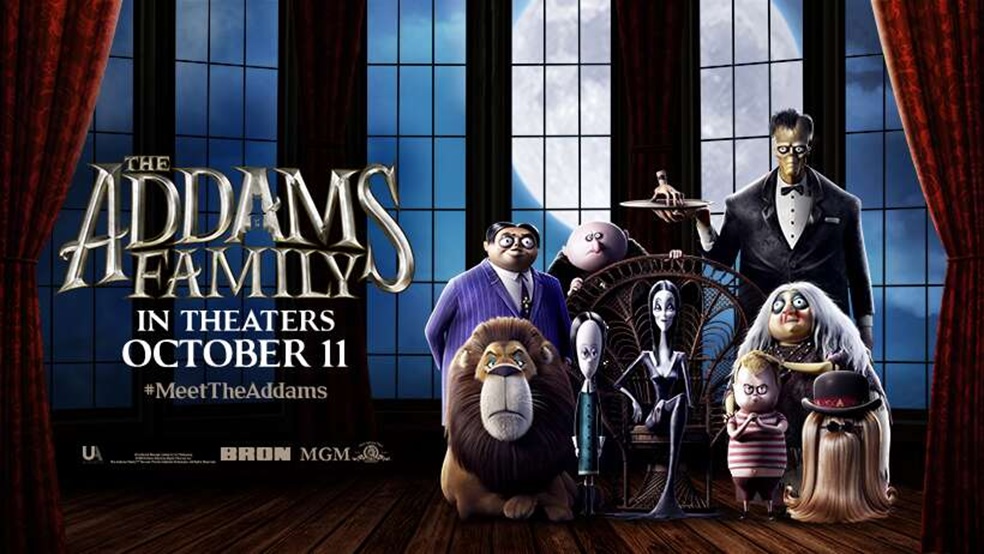 I’ve actually been looking forward to this movie for quite some time.  Not in a BIG way, but everything I saw at first was very promising.  The new designs were quite good and the initial teaser seemed to have the right tone that retained what worked about these characters in the first place while making something that worked in a modern context.  After that though, once we got the trailers with more of the plot (and those terrifying human characters), the skepticism started to creep in and my enthusiasm waned as my attention turned elsewhere (*cough* Maleficient 2 *cough*) in the last month or so.  Still, a mediocre trailer is hardly a good barometer to how a movie will ultimately turn out (especially with so much of the marketing knocking it out of the preceding months), so were my negative feelings ultimately unfounded or did something go horribly wrong (and not in the good way) with this latest Addams Family venture?  Let’s find out!!

The Addams Family are a bunch of wealthy eccentrics who basically act like spooky monsters year round instead of just on Halloween.  The family consists of Patriarch Gomez (Oscar Isaac), possible vampire queen Mortitia (Charlize Theron), their daughter Wednesday  (Chloë Grace Moretz), their son Pugsley (Finn Wolfhard), Uncle Fester (Nick Kroll), Gomez’s mother (Bette Midler), the zombie butler who is IN NO WAY of any actionable resemblance to Boris Karloff known as Lurch (Conrad Vernon), and… I guess their OTHER butler who is just a hand called Thing.  Are they goths?  Murderous blue bloods?  If they were made in the mid nineties, would they all be Juggalos?  These are questions we may never get the answer to, but rest assured that whatever box they would most comfortably fit in, it’s one that will freak out the normies of the world whenever they happen to come in contact with them.  Said normies by the way are a bunch of nameless and nearly faceless upper middle class yuppies that built a community around the Addams family mansion and are just now realizing that there’s a spooky castle full of weirdos on top of the conspicuously nearby hill, and the head of the yuppies named Margaux Needler (Allison Janney) is none to please about it.  While this little pot of… I don’t know, spooky-phobia I guess, is brewing outside of the house, the Addams family itself is having a bit of tension as well as Gomez is trying to teach Pugsly a sacred family ritual known as The Mazurka but Puglsy seems to have no gift for it, and Morticia is trying to keep young Wednesday from falling into the wrong crowd; the kind that embraces unicorns, the color pink, and young pop stars.  Can the family stick together through these trying times both inside and out of the house?  Just how far will Margaux go to keep her little community nice and conformed now that this family has thrown a wrench in those plans?  Will The Addams family adjust to their new surrounds and join the rest of us in the living nightmare we all must suffer through under late stage Capitalism, or is that the wrong kind of terrifying for them?

There’s certainly something altogether ooky about this movie, but probably not in the way they wanted.  The Addams family itself certainly have their designs down, the house is properly spooky looking with some fun little details throughout, and there’s certainly a great deal of enthusiasm on display, but it ultimately feels incredibly hollow with bad writing, sub par humor, and a cast of human characters to rival Ugly Dolls in terms of no effort nonsense.  I can’t claim to be a true fan of the franchise as I’ve barely seen any of the original show or even the nineties cartoon, but I saw the Barry Sonnenfeld movie for the first time less than a year ago and I thought that was great, so even without any sense of nostalgia informing my opinion, I’m still able to tell a GOOD Addams Family movie from a bad one, and this is sadly a bad one.  If you want a good animated Addams Family movie, they already made it seven years ago with Hotel Transylvania which looks better, has a decent story, and is SO much funnier than anything  we get here.

The thing about this movie is that it’s not rotten to its core; in fact, it’s core elements are perhaps the saving grace of the movie, i.e. the portrayal of the family itself.  Sure I don’t love EVERYTHING they do with them (Lurch and Thing feel a bit extraneous and gimmicky at times), but this particular version of these characters have a unique charm that separates them from other interpretations of the characters.  When the movie focuses exclusively on their hijinks, it’s at its deliciously macabre best with solid animation and some witty humor that calls to mind the original comics more than anything else; as if the single panel strips were adapted into a series of bite sized shorts strung together by a loose narrative.  It’s fun and flashy if not all that insightful or biting, but whenever it stays true to the spirit of the original concept (and subsequent adaptations) is when the movie is firing on all cylinders and you can get a glimpse of what this movie could have been.

The problem with the movie is… well everything else.  I know I just praised the animation, but that is STRICTLY in relation to the family itself and their haunted house.  Everything else is just dull and ugly; looking like a series of third rate doll houses populated with shoddy marionettes.  Now you could argue that this is intentional as a way to show that the “normal” people are just as off-putting and weird as the Addams family, but there’s a way to get that across without looking like total garbage, and yeah this looks like total garbage.  It’s not just that the designs are ugly, it’s that they’re totally lifeless as well.  There’s an obvious and not particularly clever reference to Invasion of the Body Snatchers, and that’s what it feels like sitting through any scene with them and not the Addams family; a bunch of unreal pod people whose facile attempts at humanity only highlight their façade.  The Hotel Transylvania sequels weren’t the BEST movies out there, but their portrayal of the humans outside of the monster world were much more apt (and better looking) than what this movie does which undercuts whatever message we’re supposed to be getting about them.  The narrative itself isn’t doing them any favors either.  While the overarching subplots the Addams family are working through are just kind of bland, at least they’re finished by the time the credits roll.  The movie makes a big deal in the first act of Wednesday going to school, and then they use it for one scene before dropping it entirely.  There’s a bully character who shows up early on but is ALSO dropped after one scene!  The ending is so poorly planned that they literally have a character point out how asinine it is (did you bring your anachronistic thing we didn’t bother establishing but now need for some reason!?)  and the villain’s story comes to a big ol’ nothing of a resolution.

It almost sounds like you could excise the human elements entirely and you’d have a rather solid Addams Family film; albeit one that’s barely over forty minutes.  Unfortunately, that’s not quite the case because there’s something off about them even if they are the best thing about this movie.  Are they creepy, kooky, mysterious, and even spooky?  Sure… but it feels… safe I guess.  The Addams Family wasn’t just about how weird they were or what antics they got up to; it was about how all of that contrasted with the rest of the world around them and that’s where things start to get a bit off base.  Now again, I’m not what you’d call a fan of the franchise, but my reading on them has always been more about wealthy eccentricities and less about being part of an oppressed underclass.  IF you wanted that you’d go to The Munsters who WERE working class and dealt with the rest of the neighborhood side-eyeing them.  The Addams Family was always upbeat and somewhat sheltered; an exaggeration of what weirdos the blue blooded culture was and their conflicts were internal family issues rather than external prejudices.  The Sonnenfeld film was primarily about someone trying to take their money from them and using their close knit family dynamic against them to do so, and while a SLIVER of that can be seen in the Wednesday subplot where her experiencing the outside world creates friction within the family unit, the ultimate message of the movie and therefore the primary theme from which all the action revolves around is just kind of sappy.  Is it a BAD thing for a movie to say that we should all get along and that people who are different shouldn’t be feared, hated, and persecuted?  Of course not, but when it comes to the Addams Family who, as far as I can tell, are not representative of ANY real world group that is being repressed (again, rich people who are also presumably from a European background) and so the sob story about being oppressed feels tacked on and hollow; the kind of corporate move that only shaves off the rough edges that are supposed to give the Addams family its charm in the first place.

If they got a whole new set of writers then I could see a sequel to this film working out because the pieces are definitely there for a GOOD Addams Family movie.  However, the movie they came up with instead is one that is rather boring, not particularly funny, and seems to have allocated none of its budget for everything outside of the Addams family home.  If it wasn’t clear already, I definitely do not recommend seeing this movie; not in theaters and frankly not even when it gets a home release.  Even if you were to just to watch the good parts of this movie and skip over the rest, there are much better Addams Family movies and shows to turn to instead of deciding to spend your time and money on this one.  Perhaps it will fit the bill if you ARE the Addams family and want to watch something truly dreadful, but even then you could just go with Addams Family Reunion instead!