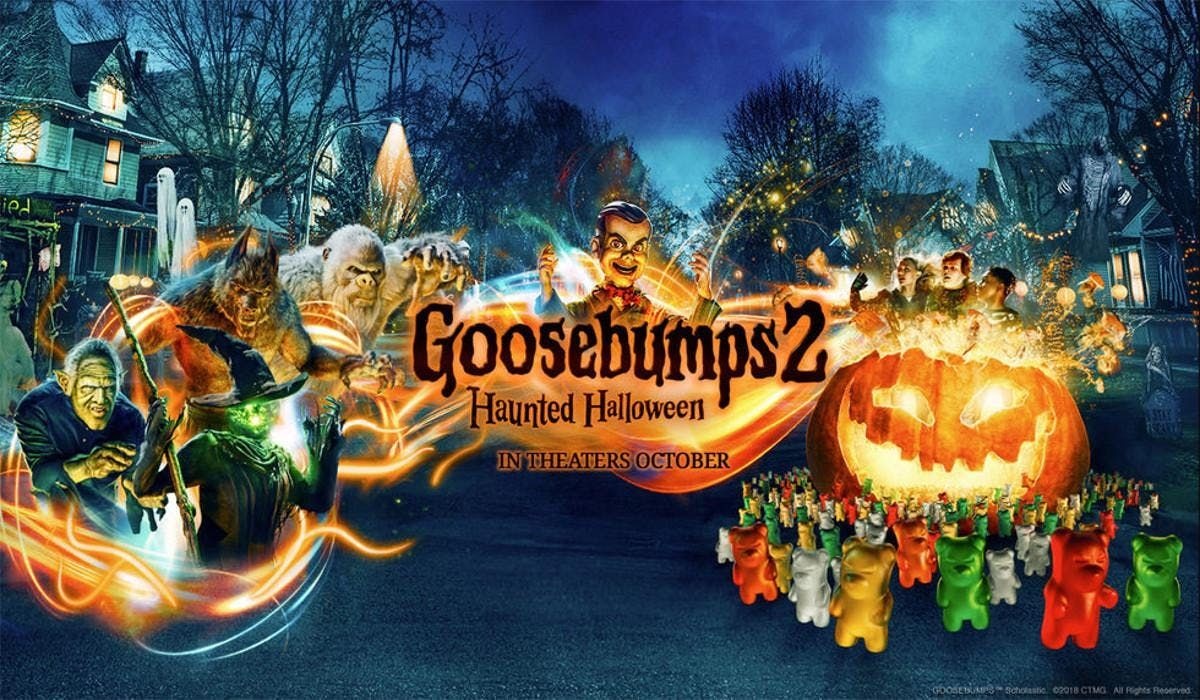 Goosebumps 2: Haunted Halloween and all the images you see in this review are owned by Sony Pictures Releasing

Was anyone asking for this!?  Look, we got off pretty easy with the first one, but the prospect of sitting through one of these WITHOUT Jack Black sounds just utterly miserable; especially since they’re still calling this a “sequel” and slapping that number two at the end of it.  You’d think that at the VERY least they’d try to distance themselves the tiniest bit from the movie they can’t even properly be a continuation of, but then I guess I’m not a Sony executive looking for something to fill an empty spot in October without spending more than a weekend allowance on it.  BUT WHO KNOWS!?  Maybe axing your most bankable star and replacing them with… nothing, is SOMEHOW a winning strategy!  Yeah… probably not, but let’s find out!!

After the events of the first film but in no way connected to them, some kids in some other city, Sonny and Sam (Jeremy Ray Taylor and Caleel Harris), are middle school students who run a trash collection service hoping to find “good junk” that they can… I don’t know, sell?  I mean it’s not the WORST idea I’ve heard of as it’s more direct and a lot cheaper than combing through flea markets, but this also runs the risk of going into a haunted house and finding a demonic book that will awaken an evil dummy that will try to destroy you and the town, BUT WHAT ARE THE ODDS OF THAT HAPPENING!?  Well sure enough, they get a mysterious call (the movie NEVER explains who called them by the way) to clean out an abandoned house that JUST SO HAPPENED to be owned by RL Stine many years ago which just so happens to contain his VERY FIRST STORY in a hidden compartment behind the fireplace.  They open it up, say some magic words from it, and good ol’ Slappy (Mick Wingert) pops into existence and wants to be a part of the family!  I don’t know about you, but an evil puppet with telekinetic powers is a PRETTY good card to have in your back pocket when the bully comes by (Peyton Wich), but I guess they way too Lawful Good to strike a bargain with him and so the two of them along with Sonny’s older sister Sarah (Madison Iseman) dispose of the dummy.  Of course they didn’t use FIRE to do it or something as equally lethal for a little wooden boy (I’d have gone with a metal crate full of termites) so NOW he’s gonna have to destroy the whole town and kidnap their mother (Wendi McLendon-Covey) just to teach them a lesson!  With Tesla’s Giant MacGuffin, Slappy uses his magic to bring all the Halloween decorations to life (i.e. NOT monsters from the Goosebumps books) and so the trio have to go to Tesla’s Giant MacGuffin to stop him; all the while fighting Styrofoam skeletons, balloon animals, and gummy bears.  Can these three youngsters do what the cops and rescue services CAN’T do by stopping a puppet with a bad attitude?  What is Slappy TRULY after, and can this all be resolved with a big discussion of each other’s feelings instead of total annihilation?  What the heck are we even doing here!?  WHY IS THIS HAPPENING!?

Man… if the first Goosebumps was the Spirit Halloween of kids movies, this is scrounging up leftovers at the Dollar General an hour before trick or treating; a scattershot mishmash of low grade nonsense that’s clearly rushed and a waste of everyone’s time.  What little I remember of the first film is done so much worse here, and the rest of it wouldn’t even pass muster on the Disney Channel; let alone as something you’d actually pay money to see.  The first one, while not particularly memorable, was at least a decent enough time that took advantage of its source material and had a few interesting ideas to work with.  This is the movie that we probably were all EXPECTING the first one as it’s just riding off the name and doing nothing the least bit interesting or unique which is made all the worse when the first one is RIGHT THERE to compare it to.  Seriously, can we just stop making sequels to movies no one expected to be good in the first place?  You were pushing your luck the first time!  NOW you’re just tempting fate, only with the Sword of Damocles over MY head!

The word of the day here is LAZINESS because everything about this feels like a halfhearted attempt or a budget compromise.  The CG creatures look AWFUL in this movie with a particularly bad rendering of Slappy whenever they couldn’t use the puppet that makes him look like he was rendered on a PS3, and not even a good one.  The plot is threadbare and the characters, while not the WORST I’ve seen in movies like this (at least they LOOK their age unlike the last film), are definitely pulled from a low end sitcom with the WACKY MOM being a particularly obnoxious presence in this movie.  At least she gets something to do though which is more than can be said about Chris Parnell and Ken Jeong; both of whom are not only above this kind of material (hey, I STILL like Ken Jeong, alright!?) and yet are barely even in it.  The whole thing just feels like an undisciplined mess that cobbled together pieces from other movies which means it never really finds a reason to justify its own existence.

The worst thing about all this is that it COULD have worked!  The first half of the movie, while nothing special, at least seems to have been aware of its limitations and refocused its scope to something that was much more manageable given the resources.  By making it about just Slappy, it felt like a kid friendly version of a killer doll movie (very much in the Child’s Play vein due to Slappy’s abundance of personality), and for what it’s worth I found it to be rather novel!  Heck, he almost kills a few kids in this movie which I can certainly appreciate when watching a horror film!  Show these PG going toddlers that we’re not messing around here!  Now that’s not to say that it’s PERFECT as there are still a lot of key areas to this part of the movie that fall flat.  I don’t recall Slappy being telekinetic in the first film but even if he was it’s still a power that doesn’t make much sense for his character and only feels like it’s there to be a narrative shorthand which honestly can also describe his motivations.  Since RL Stine isn’t really a factor in this movie, he’s no longer a representation of his darker half and is instead… just a jerk I guess?  I mean okay, they do give him SOMETHING to strive for, but it all feels rather perfunctory.  At least they had an IDEA what they were trying to do unlike the latter half where the wheels completely fly off this train wreck as it pathetically tries to recreate the first film instead of being its own thing.

The last point I want to bring up here does veer into spoilers which I TRY to avoid when reviewing films, but it so perfectly encapsulates the half-assed nature of the whole movie that I have to bring it up.  If you want to remain in the dark however, just skip ahead and know that this movie gets even worse than what I’ve already described.

We good?  Alright, so if you watched any of the more recent marketing material for this movie you know that Jack Black does indeed return as RL Stein (though not as the voice of Slappy) which as far as I can tell is the only connection this film has to the original film.  However, his “appearance” in here is one of the most shamefully hollow cameos I’ve seen in a REALLY long time; right up there with Charlie Sheen popping his head into frame for like a minute in that sequel to Wall Street.  He LITERALLY makes a joke about how pointless his presence is in here, only instead of coming across as a witty insight it feels like a smug jab at the audience as well as a testament to either his or the filmmakers inability to put any effort into this movie.  I REALLY hope it wasn’t his decision to make his appearance in this so perfunctory because I genuinely still love the guy as an actor and he brought so much to the original film which by the way is only briefly mentioned on a Wikipedia page the new cast is reading.  His daughter isn’t even MENTIONED in this which kind of feels like an important aspect to cover if you’re gonna drag him back into the picture, but hey!  If the filmmakers can’t even be bothered, then why should any of us!?

If it wasn’t clear already, let me leave no room for ambiguity.  This film is total freaking garbage.  I mean sure there aren’t a WHOLE lot of horror themed films out there for kids, but when the movie tries so little to distinguish itself from the last film and does it all so much worse, why even bother with this one?  Screw that.  You’ll save money buying the first one on blu-ray than going to a theater to see it and you’ll have a MUCH better time; not to mention more affordable snack options and bathroom breaks at your leisure.  This is NOT the time of year to release terrible horror movies because there’s so much competition at the theater as well as at home as everyone loves to pull out their collection of classic films and watch those just as much as they want something new for the season, so putting out something this halfhearted and pointless is not just a shame as far as there being another terrible movie out there, but is downright asinine.  The only good thing I can say about it is that it doesn’t have Eli Roth as the director (like the Jack Black movie he bothered to ACTUALLY be in), but that’s probably the lowest bar possible to clear and I’d hardly give it a pat on the back for doing so.