Holy crap!  The day has FINALLY come, hasn’t it!?  There are usually a handful of movies that I genuinely look forward to each year and for most of 2017 the big one was this Charlize Theron spy thriller with a lot of bloodshed and a lot more attitude!  The trailers looked phenomenal with Theron putting her heart into this John Wick knock off (it even has one of that movie’s directors) and James McAvoy being… well James McAvoy, but that’s why we go to see him in movies!  Still, a trailer isn’t always true to what a movie will ultimately be about and while I certainly have high hopes for this, I should PROBABLY temper them lest my expectations get too astronomical and I end up setting myself up for disappointment.  But still!  CHARLIZE THERON PUNCHING DUDES IN THE FACE!  How COULD it go wrong!?  Well if it does, we’ll certainly find out!!

The movie begins with the death of an MI6 agent (Sam Hargrave) in East Germany right at the tail end of the Cold War, and the British Government are in desperate need of someone to clean up the mess the poor bastard left behind.  Enter Lorraine Broughton (Charlize Theron) who given two objectives to complete once she gets there; find THE LIST that the MI6 agent had secured before getting a bullet in the head (you know, that list of EVERY SPY EVER that’s in EVERY SPY MOVIE EVER) and find a double agent known simple as Satchel who is more than likely responsible for this whole mess.  Her only contact in the country is MI6 agent David Percival (James McAvoy) who’s gone DEEP undercover in the Berlin punk scene but has more knowledge of the country’s inner workings than anyone else.  Of course, nothing is as simple as it seems as there’s a French agent rather conspicuously following them around (Sofia Boutella), there’s like five different German/Nazi dudes who hate punk music trying to find her, and she keeps getting stymied at every turn presumably to the machinations of that darn double agent!  Will Lorraine find this list that could CHANGE THE TIDE OF THE WAR before it falls into the wrong hands?  Who is this mysterious double agent, and could they be closer than she dares to believe?  How is it that all the hired goons keep finding her so easily!?  Is it the hair?  It’s probably the hair.

As I said earlier, I had this movie pegged to be a Best of the Year contender just from the trailers which in all honesty was an unfair mindset to be in as the movie we GOT is very entertaining, but not quite what I was hoping for.  If you’re going into this movie expecting John Wick Part 3 or even The Man From U.N.C.L.E. in terms of over the top spy fiction, well I’m here to tell you to lower those expectations because this is not quite the action extravaganza that we were promised when we saw those clips set to that incredibly catchy Kanye West song.  Heck, if all you know about this movie is what you saw in the trailers you probably didn’t even realize this was a Cold War film!  There’s no denying that I sat there waiting for the movie I WANTED to see and that the movie I got wasn’t the one I built up in my mind which is hardly the fault of the filmmakers who rarely (if ever) have control of the marketing, and we certainly got a GOOD film out of it even if it’s not quite a great one.  After all, who’s to say the movie I was hoping for would have been that great either?

In MY movie, this scene would have ended with a dance off!

Okay, so ignoring the marketing completely and coming into this movie fresh, what does it do right?  First of all, despite how much I’ve already insisted that this movie isn’t a straight up action film, the action that IS there is amazing.  There are too few for my liking, especially considering how long the movie is, but they do not waste a second of the ones they’ve got.  Each one is bone crunching, well shot (NO FREAKING SHAKY CAM), and sold with utter conviction by this cast who look like they’re REALLY bleeding and taking massive damage just so the choreography is that much more convincing.  It has that gruesome intensity that the director perfected in John Wick, but the aesthetics couldn’t be more different as this film deprives the violence of a lot of the flash and gloss that helped John Wick stand out.  Instead of glamorizing the MAN ON A MISSION archetype, the movie saves all its glitz and glamor for the less violent spy work scenes (beautiful dresses, interesting locales, garish lighting) that’s an interesting commentary on the artificial nature of being a secret agent and how it can all just fall away at a moment’s notice; turning bleak and washed out once the façade has been dropped and the fists go up.  They even have one action scene in here that is more or less a single take and it’s breathtaking to watch the various stages of this fight escalate and even the way it manages to move all around the city without any significant or overt cutting.  Now obviously it WASN’T a single take (the camera was clearly obfuscated at points to sneak those cuts in) but the effect is still there and makes the nearly twenty minute sequence the highlight of the film and maybe even the action highlight of the year. 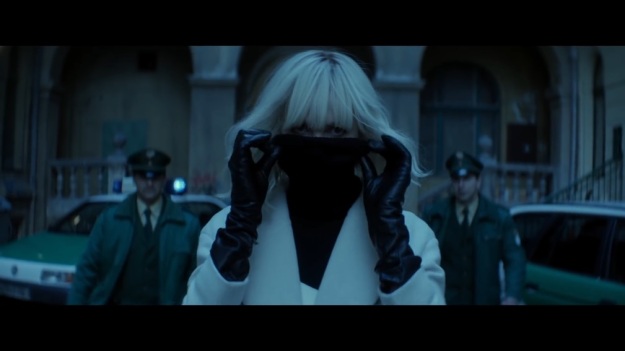 See, when she does that you KNOW you fucked up!

Now action is fun and all, but is the story around it up to snuff?  Eh… no.  Not quite.  See, this was the hardest part for me to try and get over and look at objectively as the trailer didn’t just lie about the percentage of face punching there would be in the movie, but about the general tone and feel of the movie which is much more of a slow burn than the aggressive revenge movie we were sold on.  Now again, let’s remove any expectations that the marketing set for us and try to look at it objectively.  Is it a GOOD slow burn thriller and does this convoluted story manage to come together in a satisfying way?  I can’t really say that it does as the movie doesn’t really maintain a consistent pace but is instead rather sporadic; going back and forth between intense violence and random bouts of down time that don’t do a lot to forward the story which ultimately feels way more mundane than it should.  For a movie like this that insists on focusing more on deception and subterfuge than the more cathartic personal journey of our main character, it needs to have a SUPER tight plot as well as an ending that ties everything together in a clever way to justify why we invested so much energy into the smaller details and little hints the movie shares with us over the course of the film.  It just doesn’t all come together here sadly enough which means that anytime we’re NOT seeing Charlize Theron knocking dudes upside the head, we’re advancing a plot that just fizzles out and only KIND OF answers the questions that it raises.  Without spoiling it too much, everyone’s motivations are either incredibly utilitarian (it’s their job) or oddly inconsistent which does nothing to make the BIG REVELATIONS feel like they have any weight to them.  Also, even if you can’t see the BIG twist at the end coming (which isn’t all that big), you’re pretty much guaranteed to see all the little twists from a mile away.  The movie ATTEMPTS to subvert the smaller twists with that big twist at the end (see, you THOUGHT you saw it coming a mile away, but what if we do THIS!?) but it really doesn’t DO that and everything just kinda is what it is.  Fortunately the entire cast is doing a great job with this material their given (James McAvoy and Sofia Boutella are going all in on the spy film archetypes they’ve been handed) and it keeps the movie going from scene to scene, but the overall package is just kind of a mess that should have been tightened up and given a few more moments of intense action to spread the slower parts out a bit more. 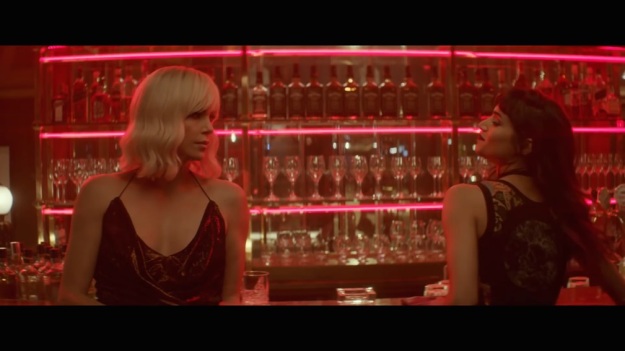 And yet despite the issues I have with the somewhat lethargic and inconsistent pace of the damn thing, it does give the film one HUGE advantage that I touched on earlier but want to go into further detail here; mainly the sense of style throughout which for me is far superior to what we got in Baby Driver.  Now I DID like Baby Driver just fine, but the soundtrack didn’t stick to me the same way it did for many others who enjoyed it and I thought the look of the film was great at points but never really gripped me all the way through.  This movie has a SENSATIONAL soundtrack ripped right out of the best of the eighties (appropriate considering the setting) which includes Bowie, A Flock of Seagulls, George Michael, even some Queen which can sometimes be overused in film soundtracks but is PERFECT here!  I also tend to like movies that go for blue tones (cold and isolated, but stylish and intense) which are the majority of this movie’s pallet and the overall look goes about as well with this late eighties grungy collapse of the Cold War as it was for The Man From U.N.C.L.E.’s more refined and outwardly gallant interpretation of the war’s earlier years.  It’s a film BEGGING for a reimagined sequel that carries over what worked so well but strips it down to the bone; leaving nothing but the raw intensity that makes this movie shine in its stronger moments.

It’s a shame that the script wasn’t able to support everything that this movie brings to the table because in the right hands (or maybe with one more editing pass) this really did have the potential to be one of the best films of the year.  MAYBE it’ll still end up on my list as the action, style, and cast REALLY is that good in this, but what should have been a surefire hit manages to miss the mark.  I still recommend going to see it, ESPECIALLY to get the full experience of those amazing action scenes playing out on the big screen, but be aware that this is just under two hours and about half of it is decent but not particularly gripping spy clichés.  Maybe you could find a productive use for that downtime and just snap back to attention whenever Charlize Theron starts throwing punches.  Get some knitting done, perhaps practice origami…