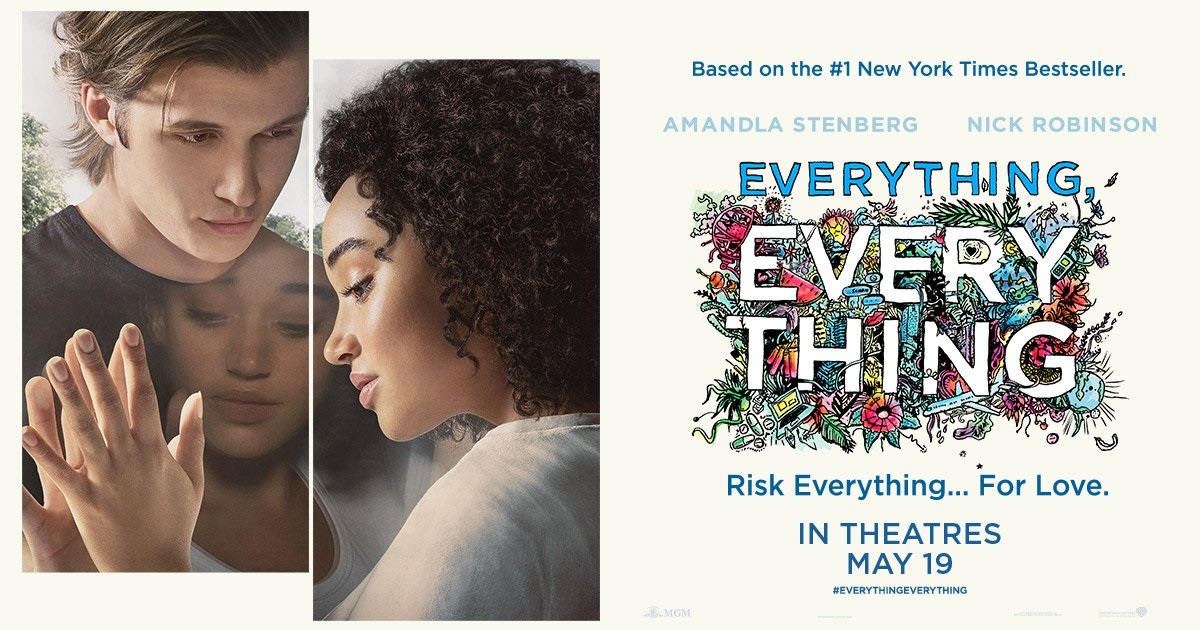 Everything, Everything and all the images you see in this review are owned by Warner Bros Pictures

I understand that not all movies are going to be for me, and one of the genres where this is most true is the bittersweet romantic drama; hence why I have yet to review a Nicholas Sparks movie on here.  For the most part, this also applies to coming of age teen films like Paper Towns, Me and Earl and the Dying Girl, and The Fault in Our Stars; none of which I’ve seen even though I’ve heard MOSTLY good things about them.  Will this manage to stand out from the pack the same way The Edge of Seventeen did for me last year, or will this be a bitter reminder of why I’ve been avoiding these for the most part?  Let’s find out!!

The movie is all about the life of Maddy Whittler (Amandla Stenberg) who has Severe Combined Immunodeficiency, also known as SCID.  Basically, her immune system is so weak that she can’t fight off ordinary germs and viruses, so she has to stay in the specially designed sterile house that she and her mother (Anika Noni Rose) have lived in since she first discovered Maddy had this disorder.  Everything seems to be going fine with her finding ways to pass the time and even having a nurse visit her fairly often (Ana de la Reguera), but all that changes when a boy moves in next door!  The strapping young lad is named Olly Bright (Nick Robinson) and they immediately hit it off despite not being able to get close to each other; otherwise he’d probably kill her with his dirty boy diseases.  That said, having opened Pandora’s Box so to speak has made it harder for Maddy to just keep on living her life the way she’s been doing up to this point, and she wants to see more!  Will Maddy risk her life just to experience the rest of the world; albeit for a very short time?  Will Olly be able to accept Maddy despite all the barriers that built between them?  Didn’t John Travolta already make this movie like a hundred years ago?

As I said, this movie is kind of an outlier in what I tend to review despite my efforts to see as many movies as humanly possible, so to a certain extent I understand that my critiques will end up falling on deaf ears… but that doesn’t mean I’m gonna hold back on my opinion of this.  This movie is alternately rather mediocre and, if not OUTRIGHT offensive, fairly insensitive to the subject matter it’s using for its central premise.  It puts to mind ANOTHER movie I haven’t seen but am aware of the plot of which is Me Before You, and while the ending of that is WAY more on the nose with how poorly everyone involved understood the subject matter being dealt with, this is at least batting in the same ballpark as that.

Now the thing is I DIDN’T have an attitude going in or even trying to be overly critical just because it’s not something in my wheelhouse.  In fact, at least for the first act, I was actually enjoying it as the premise was playing itself out in a pretty competent and amusing way!  Sure, the writing is rather corny and this character’s DEEP THOUGHTS are the maudlin and ramblings of a teenager with no life experience, but… well it fits!  So does some of the visual motifs and symbolic moments like how text conversations play out; all being somewhat hokey but fitting within the perspective of this sheltered young adult.  Honestly, EVERYTHING about this movie works at least in some part (the production, the acting, even the humor), except for the script which is where everything falls apart.  Once the story gets into the swing of things, it just doesn’t know how to handle this kind of subject matter this with tact or even present it in a believable way.  Then again, with this being based on a book that’s aimed primarily at young girls, maybe it knows EXACTLY what it’s doing with its maudlin storytelling and tone deaf resolution and I’m honestly not sure which is worse.  Okay, PROBABLY the latter.

So to discuss what’s REALLY wrong with this movie, I’ll have to venture into some light spoilers.  Now the trailers DID reveal a lot of what this movie was about and I’ll try not to go further than that, but if you plan on going into the movie cold you might want to stop reading it here.  We good?  Okay then.  This movie, intentionally or not, is NOT about living with a disability and discovering a full and meaningful life; rather it’s using this condition that people REALLY do suffer from to tell us all how SAD it would be to have this condition and how STRONG she is for having to live with such misfortune!  Oh how AWFUL is her life!  Why was she SO UNLUCKY as to not be born normal?  Imagine how ADVENTUROUS it would be to kill yourself by doing NORMAL things for a day!   What it ultimately comes down to is that this is not a movie form the perspective of someone with (or frankly all that sympathetic to) SCID; rather it feels like someone saw that Jake Gyllenhaal movie Bubble Boy and thought they could make the next Fault in Our Stars with that.  It feels like an outsider looking in as everything the movie deems as tragic about her life is stuff exclusively from a non-SCID point of view.  She can’t go outside or see the ocean because she’ll immediately catch a disease and die.  Sure, I can imagine someone who’s living in that situation having to come to terms with the limitations of their life, but the movie never feels like they WANT this character to.  Let’s do an example here.  The BIG point of this movie is that she wants to be with her boyfriend Olly, but feels that her lifestyle means she’d never TRULY get to be with him.  I can understand someone THINKING that way, but the movie itself seems to AGREE with that sentiment which is just flat out wrong.

I mean, if we want to GO there… have they heard of web cams?  What about a sterile bondage suit for Olly to wear, or how about sterilized toys?  It’s not even clear if there’s THAT many physical limitations considering both her mother AND nurse are always around her!  They sterilize at the door, and boom!  Everything’s fine!  Okay, they aren’t sticking their tongue down her throat, but even THAT can be worked around!  No one in this movie has heard of a dental dam!?  Okay, that’s for the OTHER kind of kissing, but I can see it even working with mouth to mouth… as long as one of them doesn’t accidently inhale it.  The point is that the movie’s view of EVERYTHING, particularly romance, is SO limited to an able bodied point of view that it leaves the premise feeling completely unexplored!  Say what you will about Bubble Boy (and I’m not about to argue with anyone who has a problem with the movie’s portrayal of SCID), at least the movie didn’t wallow in the tragedy of this guy’s life!  It may be an incredibly dumb and crass adventure movie that uses the condition as a launch pad for humor and slapstick, but to me that’s AT LEAST better than doing the same thing for a half thought out tear jerker.  Oh, and that ending?  Boy does THAT just put the final nail in the coffin!  They just couldn’t help themselves from REALLY hammering home how much they simply do not understand or really even care about SCID and those who suffer from it.  It’s certainly not my place to say with any authority, but I can’t imagine someone who ACTUALLY has a disorder like the character in this movie watching it and not feeling completely alienated by it.

My other problem with the movie, which admittedly isn’t as BIG of a problem and more of a personal issue, is that they REALLY try to sanctify this girl as being just as pure as the sterilized world she lives in, and while I can see WHY she would have ended up like that, it kind of skirts the same problems with the movie’s portrayal of the disease.  To me, it would have been A LOT more interesting if there was SOMETHING rebellious about her or if she had ANY vices which the movie makes a point of telling the audience (at least twice) that she doesn’t have any.  At least the film acknowledges that she’s INCREDIBLY sheltered and makes that characterization make sense, but it also makes her kind of boring.  She makes models and writes REALLY short book reviews online, but other than that we don’t know much about her other than what she’s missing out on.  It’s the Bella Swan problem where the main character of a story like this can’t be TOO out there or else it’ll be harder for the reader (or viewer) to relate to them which is the whole point of telling this story, so I won’t knock off TOO many points for that.  It just feels like so much of this movie is a hermetically sealed as the character herself and that all the rough edges have been scrubbed away.  Possibly a decent creative choice if there was more to it (imagine if this was shot closer to 2001: A Space Odyssey to REALLY hit home her isolation), but instead it just comes off as yet another product from the YA assembly line.  Mild flavor of course.  Can’t get too spicy!

I’m sure there are people who are gonna get something out this movie, but it feels like in making a film for that audience that they cut out everything interesting along the way.  There’s a very specific mold out there that all these movies aimed at teenagers HAS to fit for some arbitrary reason and it just feels so limiting in that respect.  Then again, when someone DID try to break from the formula with The Edge of Seventeen, it barely got any attention so maybe the audience out there is getting exactly what they want.  If they’re happy with this, then fine.  I just hope they ALSO realize how messed up some of the implications of the film are and why it’s important to get someone behind the camera who knows what’s actually going on in front of it and who they’re supposed to represent in the movie.  I certainly wouldn’t recommend seeing it in the theater for those reasons, but then how many of you were on the fence about it in the first place?  Maybe you should check it out once it gets a home release as there are some decent aspects to it, but you’ll know if this is your kind of movie just from the trailer.