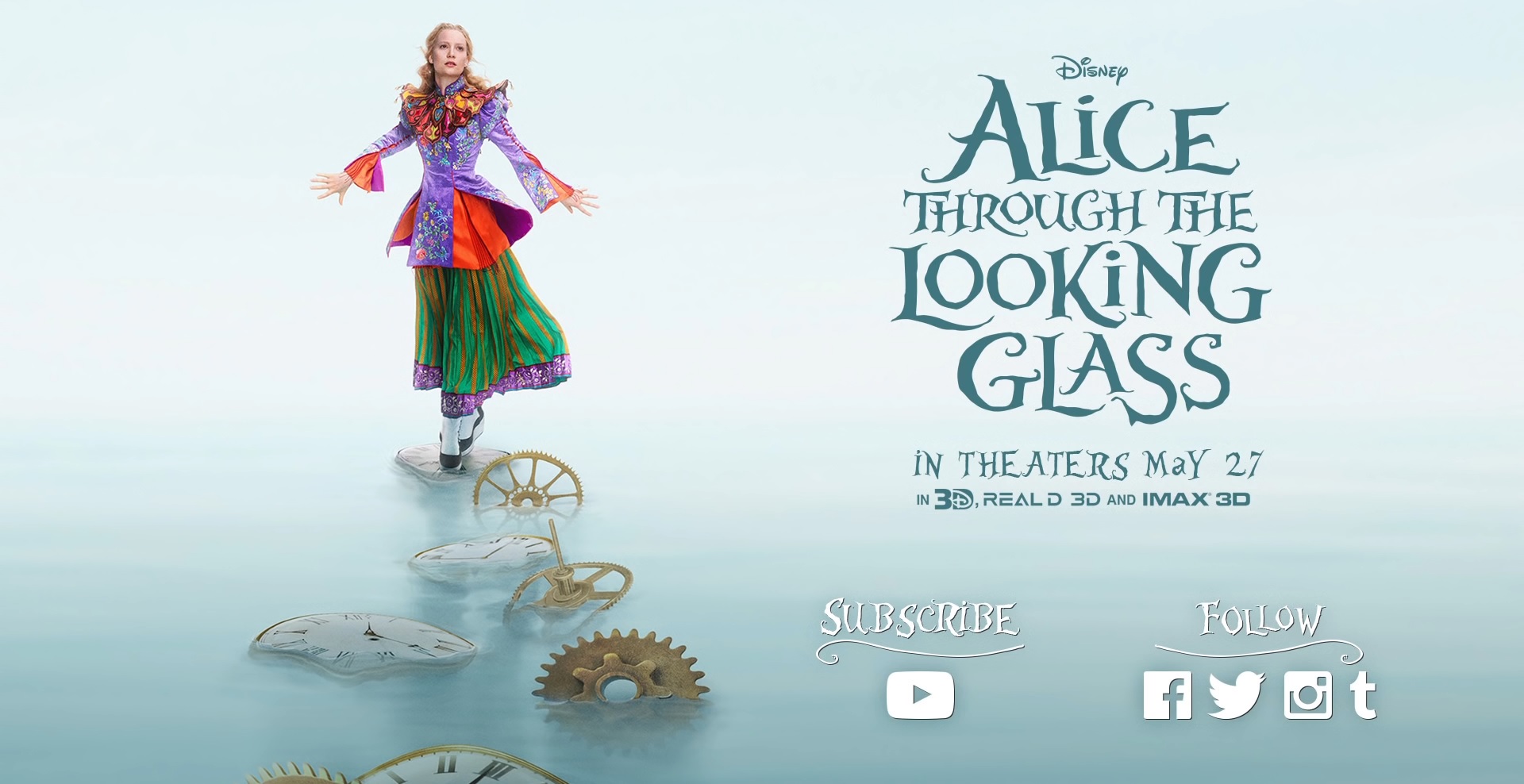 A sequel to a movie six years after everyone stopped caring about it!  THAT’S never gone wrong, am I right?  To be fair to Disney, the original film did make an astonishing amount of money (one BILLION worldwide) but this feels way too late to capitalize on whatever moment that first movie had.  Not only that, but it was also one of the early 3D films which I’m sure boosted the ticket sales, yet now we’re at a point where people are just sick of the gimmick, so it doesn’t even have THAT going for it.  Still, the first movie did manage to be pretty decent and the trailers for this looked very creative to say the least.  Can this manage to be a damn fine sequel that just needed a little extra time to fully come together, or is this a naked cash grab for everyone involved?  Let’s find out!!

The movie picks up three years after the first movie where Alice (Mia Wasikowska) has spent the intervening time traveling the world as a sea captain for Ascot family’s trading company (I think).  She returns to England at the start of the movie to see her mother (Lindsay Duncan) and plan the next trip with the company.  Unfortunately, the Ascot patriarch has died since she last returned and the one in charge of the company is his son Hamish (Leo Bill) who you may recall was set to be Alice’s husband in the first movie which didn’t end up panning out.  Now that this new guy is in charge (and he has a wounded ego) Alice is not only no longer employed as a sea captain, but for some reason is given an ultimatum to either sell her father’s boat or risk losing her mother’s house.  It gets worse when you find out that the mother has been working behind her back to make sure she gets fired so that she would have no choice but to “settle down” as all proper ladies do.  Well I’d say THAT’S enough stuff to stress over to make a trip to Wonderland seem like a wondrous vacation, right?  She gets led to the titular looking glass by the butterfly Absolem (Alan Rickman) and eventually finds the Mad Hatter (Johnny Depp) on the other side who is slowly dying and not quite so delightfully mad.  Apparently he found a modicum of proof that his family is still alive but no one else believes him so he’s going to slowly die of depression… I guess.  Alice has no choice but to go back in time to save the Hatter’s family from the Jaberwacki and has to face off against Time himself (Sacha Baron Cohen) to get that ability.  Will she be able to save the Hatter from his battle with depression?  What will she learn as she travels back to the glory days of Wonderland, and what must she risk in order to get the opportunity to do so?  Does anyone else notice that its’ a lot brighter this time around?

I had a feeling that I was gonna like this movie more than most people would.  I enjoyed the first one a lot, though I don’t think I’ve seen it since it originally came out, and when the trailers for this were popping up I thought it looked like more of the same.  It probably won’t have much in terms of story or character, but visually it will be a marvel to behold as they obviously spent a SHIT load of money trying to make Johnny Depp look even creepier, Helena Bonhom Carter look even sexier (don’t think about that too much…) and Sacha Baron Cohen look… well like a Sacha Baron Cohen character.  The movie looked fine which is an opinion that seems to have been more glowing than what most people thought about it, so I was expecting to be the odd man out.  I wasn’t expecting to be THIS MUCH of an odd man out though.  This movie is GREAT!  Is it better than the first movie?  From what I can remember, yes!  The first movie felt like it was trying to do too many things at once and never really becoming its own thing because of that.  Say what you will about this movie, but it’s NOT trying to be a Lord of the Rings knockoff like the last one was, and it is SO much better for it.

The whole “let’s not try to be something we’re not” aspect  is the primary reason so much of this ends up working and is frankly a breath of fresh air in the current cinematic landscape.  It’s got A LOT of money behind it, yet it’s still a relatively small story.  There’s no destiny story line, giant dragon to kill, or war between kingdoms.  It’s a time travel story about Alice trying to save a friend from their own downward spiral into depression and eventual death.  It’s about her seeing people she has known for a long time in a new light and gaining a sense of perspective on their lives and as well as her own.  She’s not trying to save Wonderland (I know it’s supposed to be UNDERLAND but that is just stupid) from a maniacal dictator as the trailers are selling this as (Sacha Baron Cohen really isn’t a bad guy here), rather it’s about these close friends getting way in over their heads and trying to get themselves out of a bad situation.  Okay, EVENTUALLY it becomes about saving Wonderland, but that’s only at the end and honestly it’s the weakest part of the movie.  Hell, even Helena Bonhom Carter isn’t trying to take over the world this time!  She’s just holding a petty grudge and wants to shame the White Queen for something she did in the past.  In fact, the interplay between Helena Bonham Carter and Anne Hathaway are some of the more poignant moments in here as it’s a really great example of a toxic person finding a way to squirm their way into a person’s brain and incessantly dig at that person’s sense of guilt.  It’s admittedly a rather small part of the movie, but the fact that they bothered to put that much effort into something that was not a big focus goes to show the care and attention put into every detail of this movie.

The look of the film has also improved drastically.  Presumably because the Red Queen is no longer in charge, Wonderland has stopped being an overcast nightmare of muted colors and gothic designs, and instead everything is bright and colorful with the place now being restored to its former glory.  It’s amazing how much this changes the movie’s general outlook and tone as everything feels lighter, more fun, and very personal.  I liked the look of the last movie just fine in its commitment to bring dark beauty to a world that can often be interpreted in such a nihilistic way (*cough* American McGee *cough*) but the sheer joy with which everything in here is presented and the brightness of the world the characters inhabit is a breath of fresh air when we have Power Rangers wearing Robocop armor on the horizon and Batman murdering dudes with machine guns for the foreseeable future.

If there’s one major flaw with the movie, it’s that it starts to run out of steam towards the end.  Right around the point that we shift into the third act, the movie starts to feel a bit rushed with transitions being more perfunctory, characters’ threat level rising dramatically for no real reason, and a big rush to save the world as I guess has to be standard with these kinds of movies.  Hell, the ending here is almost the same as the ending to Gods of Egypt with a big nebulous Thingy threatening the world.  This one is done MUCH better though… and now I’m reminded that Gods of Egypt is something that existed.

This is also the part where they take a random trip back to the normal world and it accomplishes next to nothing other than to give Andrew Scott another paycheck.  That or maybe the movie is trying to one up Sucker Punch for some reason as it takes place in a mental hospital… for reasons.  It’s not a BAD idea to bring some contrast to the movie (go from colorful and wacky to dour and grim), but it’s not developed enough for it to have meaning and for them to have bothered keeping in the film.  They should have either scrapped this scene in the editing room or written an extra couple pages and gotten that FULL day of work out of Mr. Scott instead of the twenty minutes it took to do his scene.  Maybe they just wanted it for the trailer and then HAD to keep it in because of that.

On top of that, the happy ending wrap up doesn’t quite sell as well as it should and some of the character conclusions feel pretty forced.  Normally I’m the guy who loves a happy ending, and I do like this one, but there’s only so much I can take before my cynicism takes over and I call bullshit on someone’s comeuppance being severely undercut or a character making a complete one-eighty for no apparent reason.  Hey, at least they bothered to give Crispin Glover’s character a conclusion which I NEVER would have expected!

Something tells me that this is not gonna be a critical darling or even a modestly well received film, but then again neither was the first one.  The movie just hit me the right way with its brighter tone, focused story line, and genuine moments between many of the characters; not to mention the fantastic art direction and moments of self-aware humor.  It reminded me of one of my favorite movies, Forbidden Zone, which honestly isn’t too far off from an Alice in Wonderland story.  I wouldn’t say that this is even NEARLY as good as that piece of gonzo cinema is, but this movie had just the right balance of quirkiness and polish that it ended up endearing me to everything that was going on onscreen.  It’s probably not gonna be everyone’s cup of tea (nyuk nyuk nyuk) but to me it was something wholly original and a breath of fresh air that I really needed before the summer gets into full swing.  I absolutely recommend you go out there and see this, especially if you liked the first one.  It’s a fun and colorful ride that manages to have that style without sacrificing all of its substance.  Some of it sure, but that still puts it ahead of most CGI heavy summer films!

One thought on “Cinema Dispatch: Alice Through the Looking Glass”