Well THIS certainly is a unique specimen!  I mean… it IS for another two weeks until Angry Birds comes out (ugh).  What we have here is the first CG animated film that has gotten a wide release in US theaters!  You’d think SOMEONE would have thought to do this by now considering how many of the pre-generation seven game heroes were aimed at children and some variation of a loveable animal character.  While Uwe Bowl was fucking around with Alone in the Dark and Postal, no one was willing to give Sonic the Hedgehog or Megaman a shot?  Well that all ends HERE with this movie based on the iconic video game series AND the added bonus of Insomniac games being a part of the production to make sure it’s done justice!  Do they succeed in making the first CG animated video game movie, or is this one big glorified cut scene that wouldn’t have passed muster in 2002?  Let’s find out!!

The movie is all about Ratchet (James Arnold Taylor); a cat like creature who lives a Tatooine knock off and spends his time poorly repairing hovercrafts by adding (presumably illegal) modifications that no one asked for and no one would find useful.  Oh well, at least he has heart, and dreams, and… probably other stuff too that the movie doesn’t really get into.  He’s THE HERO’S JOURNEY writ large and he’s got a call to action lined up for him!  Apparently some bad guys are blowing up planets for reasons (probably because their dicks) and so the team that defends the WHOLE galaxy has decided to increase their ranks from four… to FIVE!!  Okay… well the group, known as the Galactic Rangers, are holding tryouts to find this fifth member (there isn’t already a training program or an academy or something?) which Ratchet participates in, but fails miserably; probably due to his extensive arrest record.  Things may look grim for Ratchet who’s still stuck on this dirt planet, but salvation arrives in the form of a little robot who crash lands near the garage Ratchet works at, and he rushes to save him!  The little robot seems to know something about the villain’s evil plan and must get to the Galactic Rangers to warn them.  Ratchet agrees to help, gives the little guy the name Clank (David Kaye), and they’re off to save the Rangers and the Galaxy as they know it!  Can they manage to stop the bad guys from blowing up the rest of the galaxy?  Will the Galactic Rangers accept them as one of their own?  Did… did anyone actually sit down to watch this before shoving it into theaters? 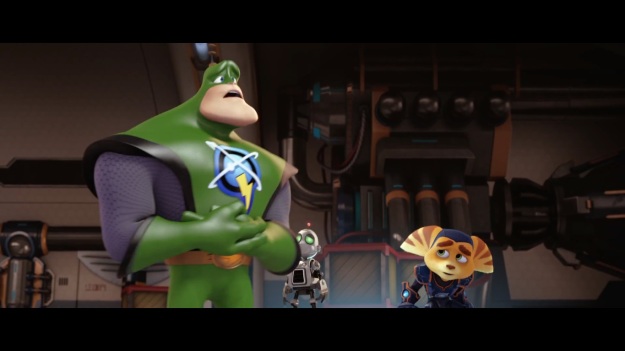 Remember how Andrew Lloyd Webber would only allow a Phantom of the Opera film if it was done on his terms?  Remember how bad THAT turned out, or do I need to remind you of Gerard Butler’s singing voice?  I think we’ve got another example of that because for all the effort Sony and Insomniac Games put into make this the movie they wanted; it turned out to be a MONUMENTAL disaster!  HOLY SHIT!  I’ve managed to miss a lot of the REALLY bad animated movies that have come out in the last few years and I guess I’m paying for it now because this was an absolute TRAVESTY.  I’ve never played a Ratchet & Clank game, but I know what the fuck a good movie is and this sure as hell is not one.  Where to even BEGIN with this!?  The animation that looks good for a PS3 game but pales in comparison to any recent animated feature (that doesn’t star Rob Schneider)?  The story which makes absolutely no sense and probably wouldn’t even work in a video game?  The world they set up which is aggressively small and full of morons?  The fact that Ratchet and Clank barely share any screen time together!?  As much as I would love to see movies based off of properties like Metal Gear Solid, Legend of Zelda, and No More Heroes, this cinematic blight has killed my enthusiasm for any video game movie for some time.

Everything about this feels low quality; even the stuff that’s not dependent on the relatively small budget that this movie has.  Characterization is thin and cliché with Ratchet being worst of all.  The movie is resting on his shoulders, but he’s just not interesting enough to carry this.  He wants to do big things… and that’s about it.  He’s a good mechanic too I guess, but that plays very little into the movie itself once it gets going.  You never buy his hero’s journey as it speeds through very important parts of it, mainly his trials and quests to build him up as the hero.  He has a heroic moment that gets him into the Rangers, but at no point after that (until the third act) do you believe he’s even capable or saving a food court, let alone the galaxy.  They could have AT LEAST put in a training montage to show him improving over time, but the most we get a bit where he fails over and over again to use the weapons.  There is no build up for his character, so it has no significance when he fails at the end of act two to set up his redemption.

At least he gets an arc though.  Poor Clank has less than nothing to do here and is relegated to the background during the entire second act; leaving Ratchet front and center in story that should be about the both of them.  He’s also clearly the better of the two considering he’s motivated by a genuine concern for the galaxy and that he wants to stop the bad guys, while Ratchet is just kind of a fame chaser.  I don’t know why they even bothered putting him in the damn story if they had no idea what to do with him!

If the worthless protagonists weren’t bad enough, the world building is ATTROCIOUSLY poor and it’s as if the writers didn’t know how much the audience was supposed to know from scene to scene.  For example; Ratchet is supposed to be a Lombax, but in the movie no one’s quite sure what he is and just think he’s a cat.  Not the news reporters, not the Galactic Rangers, I’d be surprised if his mechanic mentor knew he was a Lombax.  Then all of a sudden, in ONE scene, one of the bad guy’s minions refers to him as a Lombax.  This is the ONLY time someone uses the word Lombax in the movie; not even Ratchet says it.  Not only is this kind of issue prevalent throughout the movie, but for a story that spans the galaxy, everything feels so small here.  The Galactic Rangers consist of six members, yet they have a gigantic facility.  There’s mention of a president, but he’s never seen in the movie.  We’re TOLD this is big and expansive, but the movie never feels like it as everything looks the damn same; ESPECIALLY the space scenes which have no sense of scope, scale, or wonder and just feels like a generic background for the action to take place against.  What about the bad guys?  Are THEY at least fun to watch?  While they aren’t AS bad as the heroes or the world building, there are far from being anything memorable or have anything even close to depth.  Sometimes you can kind of forgive antagonists that that don’t have rich backstories if they can provide the proper menace (*cough* Guardians of the Galaxy *cough*).  The thing is though that they have ZERO menace to them which makes it harder to excuse how one dimensional they are.  Their only saving grace is that they’re NOT the focus of the movie which means that not as much of this is resting on them as much as it is for the title characters and the Rangers.

You’re not the worst thing in this movie.  Congrats…

Honestly, a lot of this COULD have been forgiven if the humor worked in the slightest.  There are a COUPLE of chuckles and smirks to be had, but when a movie is this terrible in so many other areas; the lame and corny humor just stands out that much worse.  About half the jokes are the worst kind of lampshade hanging that only exists to pretend the weak material is a choice to make an “ironic” statement.  It’s not ironic or satire if you can’t get the basic building blocks right!  You need a solid and entertaining foundation to build off of, else you end up with something like this or Duke Nukem Forever; wallowing in its own sense of self-importance while doing nothing to earn it. 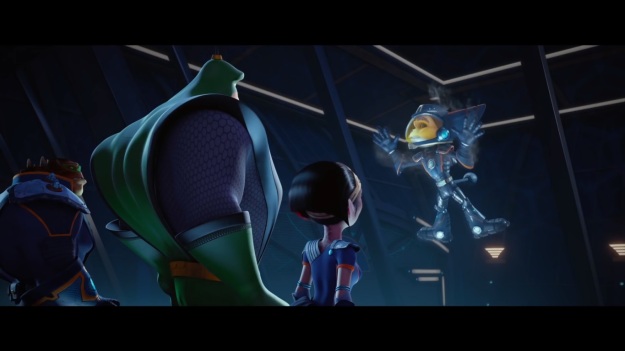 I oughta break a broom handle off in this movie’s ass.

I can point to only two good things in this movie, and they’re pretty small.  First, there’s a secondary villain in here that has a decent design AND a backstory that makes sense.  It’s not explored much and when he DOES step up to the plate he’s kind of a disappointment, but he felt like someone that they bothered to actually write for instead of stuff with pop culture references and meta-humor.  The second good thing I can point to is that, aside from an okay Wilhelm joke, Captain Qwark is the ONLY thing that brings any laughs to the movie.  He’s what you would get if you combined Bruce Campbell, Tom Papa, and Johnny Bravo into one big chinned pathetic chump and he manages to irk a few smiles out of me when he was at his most obnoxious.  His character arc is barebones to an insulting degree (I don’t mind the trajectory his story took, I mind that they didn’t try to put it into some sort of context) but he’s easily the best thing about this movie.

“Who wants to pound some space brewskies and go to a space strip club?  You’re buying!!”

It hurts SO much worse to know that this was made by the people who care about it the most.  That’s not always a good thing (just look at the aforementioned Phantom of the Opera film), but it’s still discouraging to see a passion project like this be such a colossal failure.  The great Hollywood video game movie has yet to be made.  I maintain that films like Mortal Kombat are fun and even Prince of Persia is not without merit (especially when compared to other video game movies), but the fact that we’ve now seen video game movies in so many genres with varying budgets and target audiences, it’s getting harder and harder to take any upcoming project seriously as there seems to be some fundamental misunderstanding of adaptation that has kept filmmakers from truly capturing what makes the games so enjoyable and effectively translating that into a non-interactive medium.  I guess we’ll have to wait for the next one to see if that manages to crack the code.  Wait… the next one is Angry Birds.  Grr…