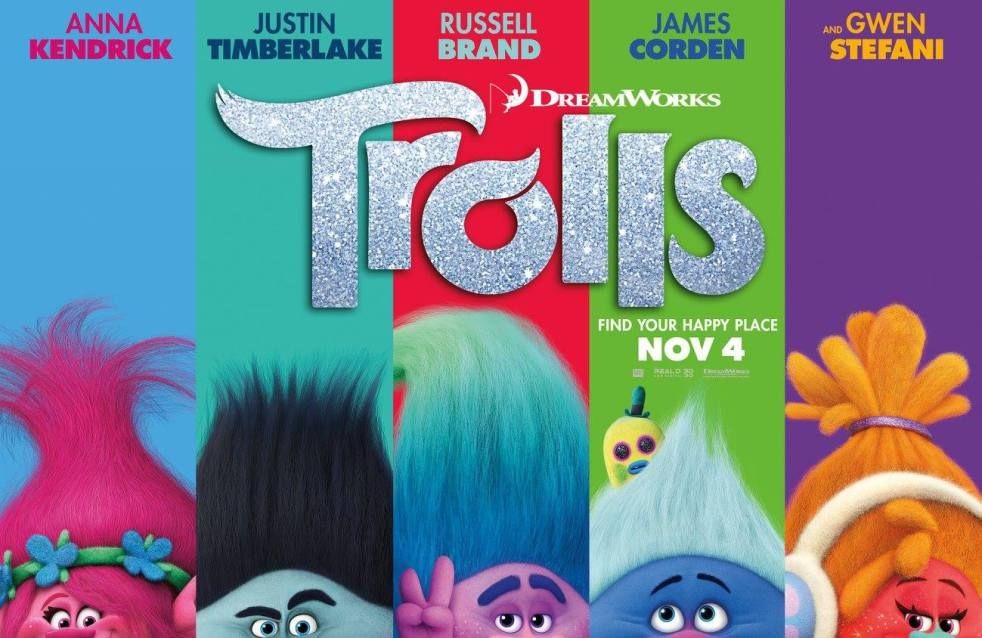 Ugh… I seriously do not care about trolls; either in general or the ones created by Thomas Dom which this new movie is supposed to be based on.  We already have two Smurf movies and another one on the way!  WE DON’T NEED A KNOCKOFF!!  Okay, I need to calm down.  Just because it’s a DreamWorks animated film based on a property I do not care about, doesn’t mean it’s going to be BAD.  Shrek was based on a book, and I liked that movie!  Okay… that was like fifteen years ago, but maybe they can pull off that same magic here as well!  Does this manage to be a fun adventure in a colorful world, or is this one hell of a bad trip?  Let’ find out!!

The movie begins with a whole backstory for the Trolls and the Bergens.  You see, boys and girls, Trolls are full of sunshine and happiness and like to sing, dance, and hug all the time.  Bergens on the other hand are grumpy and miserable like all of us in the REAL world, and apparently the only time they feel any semblance of happiness is whenever they’re eating Trolls.  I guess all that ecstasy the Trolls have to be taking in order to keep up their parties makes their flesh chock full of endorphins or something.  For the longest time, the Trolls lived in a tree right in the middle of the Bergin kingdom (seems like a bad idea if you ask me), but they escape with due to the valiant effort of their king (Jeffrey Tambor) and the ones the Bergens end up scapegoating for this is their Royal Chef (Christine Baranski) who is banished form the kingdom.  Twenty years later, the princess Poppy (Anna Kendrick) is set to become the queen of their new home, and she puts on the biggest party EVAR despite the protestations of the grumpy survivalist Troll, Branch (Justin Timberlake).  Sure enough, the revelry is enough to get the attention of the Chef, who’s been looking for the Trolls for the last twenty years, and she’s finally able to snatch a few of them to bring back to the Bergens and get back into the graces of their current leader, Prince Gristle Jr (Christopher Mintz-Plasse).  Poppy sends all the remaining Trolls to Branch’s doomsday bunker to stay safe, and Branch begrudgingly goes along with her to rescue her kidnapped subjects so that he can clear them out of his home as soon as possible.  You know!  Like that OTHER DreamWorks character who’s a lonely curmudgeon in a fantasy world!  Will Poppy and Branch find their friends before they’re boiled alive, chopped to pieces, or stuffed in a pie?  Just what does the Chef have planned once she gets back in the Bergens’ good graces?  Seriously, do these Trolls do ANYTHING other than party!?

This movie has a COVER (not the immortal classic itself) of Earth Wind and Fire’s September.  If that doesn’t perfectly encapsulate the cringe worthy nature of this movie, I don’t know what does.  There’s no denying that the animators have done a fantastic job of bringing this script to life with an aesthetic that brings to mind an Etsy page of someone fueled by caffeine and nothing else, and the only other movie that you can really compare it to in that regard would be The LEGO Movie.  Unfortunately, where this film falls short of The LEGO Movie is in its mediocre writing, painfully awful jokes, and sever lack of tension or interest as we keep changing the stakes at random points which throw the pacing completely out of whack.  It has all the resources imaginable to make a memorable movie, but it only managed to get the visuals right which strain mightily under the weight of everything else that doesn’t work; making this a rather uneven and ultimately unengaging experience.

Let’s at least mention the positives first, which as I said are mostly the visuals.  The entire script is in service of providing excuses for big flashy moments like parties, or music videos, or make over montages, and while this is why the movie is unsatisfying to sit through, it at least means they animators were free to do whatever the hell they wanted and actually took advantage of it.  The movie is beautiful to look at and there are some scenes, when taken in isolation of the rest of the movie that manage to elevate the material above its lousy script and be somewhat enjoyable.  Early in the movie, we get the call to action moment where Poppy tries to go off and save her friends while singing some pop song, and this plays out like a decent music video where she’s facing adversity over and over again but always manages to overcome it.  Now the scene ultimately doesn’t work in the movie because we don’t get a sense of forward progression (are we half-way there now, or are we a third?) which makes this merely a distraction to fill up time before Branch begrudgingly joins her on the quest, but I guess it was a DECENTLY EXECUTED distraction.

I didn’t connect with any of the Troll characters in this (not even Branch who’s cynicism seems half-assed and only there for him to be proven wrong), but I did like the Chef as the primary antagonist here who’s conniving and forceful demeanor is wasted on a movie this unenthusiastic about its plot.    I also did like Bridget at first (played by Zooey Deschanel) who is Prince Gristle’s scullery maid with a crush on him as she seemed to have some depth and intelligence to her, but once the Cinderella subplot with her gets started and she inevitably starts rapping (ugh…), I quickly soured on her and whatever moment of emotional resonance the movie had.  Still, she was fine for those ten or so minutes, so that’s something… at least.

Other than that, I don’t really have anything nice to say about this.  The movie cashes in hard on sentimentality and childish humor; both of which fall spectacularly flat in the way its corporate branded existence clearly indicates.  Unlike the ACTUAL sincerity you would find in say… a Pixar movie, this film has no sense of nuance or authenticity and instead sends its audience through a series of simplistic (and sometimes nonsensical) trials that only serves to validate it’s worldview.  By the end of the movie, Poppy is proven completely correct, Branch is proven completely wrong, and everything is hunky dory throughout the land.  Now obviously a kids’ movie can get away with simplistic morals to an extent, but working in moral absolutes does not lead to compelling story telling, and there’s hardly a turn in here that’s surprising or even challenging for our characters to overcome.  The only real hardship anyone has to endure here is towards the end, and it’s something that’s oddly enough completely spoiled in one of the trailers, but the solution to it doesn’t require sacrifice or hardship; just reassurances and a pep talk… or in this case a pep song.

Unsatisfying story arcs aside, which I guess you can argue how important that is to a movie like this, the film just wasn’t all that funny and relied either on visual absurdity or being straight up annoying.  Remember that stupid freaking cloud in the trailer?  Yeah, he literally has nothing to do in this movie and is gone within three minutes of him showing up; never to be seen again until a gag at the very last second of the movie.  None of the jokes or running gas from the Trolls in this movie inspired even a tiny chuckle; even Branch who’s supposed to be the cynical straight man to ground all the wacky characters, but even he doesn’t have any bite to him and is more of a asshole trying too hard to be angry rather than legitimately unimpressed with the way the other Trolls live their shallow and unfulfilling lives.  I mentioned that the Chef is enjoyable and that Bridget was tolerable at first, but the Prince who’s the other major Bergen in this is completely and irredeemably annoying.  At first, I thought it was yet another obnoxious Josh Gad performance, but it turns out to be McLovin himself and the best thing I can say about him in this is that he does a decent Josh Gad.  He’s whiny, vain, weak willed, and unlikable so it’s hard to root for him as an unwilling pawn in the Chef’s schemes when he’s the damn ruler of this land and clearly doesn’t deserve anything he is (or feels) entitled to.  Fine, it’s another example of this movie going for broad humor rather than nuance, but if we’re sacrificing the personalities of the Trolls, the personality of most of the Bergens, any semblance of a nuanced storyline, and a moral with any bite to it, then don’t PRETEND to have any of those things with JT singing a sad love song or having every conversation between him and Poppy be about the moral gray area between practicality and optimism!  Spoiler alert: optimism is the one true answer because reasons that involve rainbows and singing.  The only ones that got any mild chuckle out of me were the Chef and a few of the background Bergens who were kind of funny in the way they handled their crippling depression.  Okay… it doesn’t sound THAT funny the way I put it, but it’s a bit of dark humor that elevates the film just a tiny bit.

This is just another animated film that’ll be forgotten as soon as the visuals get outpaced by other better films, and within five years no one is going to care one bit about this.  Maybe being a good enough film right now (or at least good enough to make its money back) is enough for DreamWorks, but I guess that’s why they’re still not as good as Pixar.  I certainly wouldn’t recommend going to see it, but for its target audience… well at least it looks nice.  There are WAY better animated films this year that you can be watching instead like Zootopia or Kubo and the Two Strings, but I guess if you can’t wait for Moana, well this is at least better than Storks or Ratchet & Clank.  That’s something… at least.