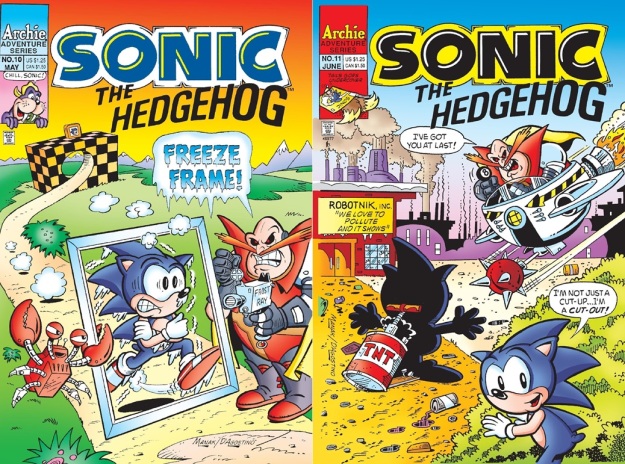 We’re back with another look at the comic books that came out right around the time that Sonic Mania is so DESPERATELY trying to recreate! Now if the NEXT Sonic Mania introduced the Freedom Fighters, you might just hit MY nostalgic sweet spot as well, so get on that SEGA!!  Anyway, let’s go ahead and make this recent resurgence of Classic Sonic complete with a look at two more issues of the comic!!

The issue begins with Sonic doing something that’s actually pretty awesome and is a very useful application of his speed; namely, detonating land mines placed by Robotnik’s robo-minions.

END_OF_DOCUMENT_TOKEN_TO_BE_REPLACED 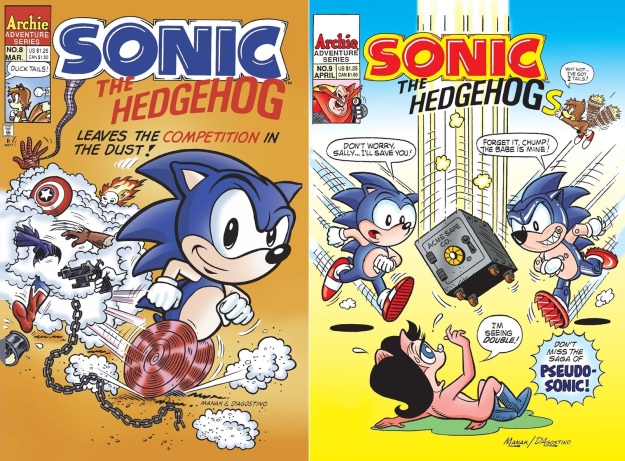 It’s time once again for everyone’s favorite hedgehog rear his spiky head once again and mildly amuse us with woodland critter shenanigans and an endless barrage of painful puns!  The last two issues did show some marked improvement as the series seems to be slowly heading in the right direction, but issue six also had the inexcusable Christmas Carol retelling so there’s definitely lots of room to improve.  Is there anything that terrible in these two issues?  I doubt it considering how deep of nadir that one story carved out for the series, but let’s find out!!

I guess after seven issues without getting cancelled, the writers of the Sonic comic felt they could start taking shots at the competition; hence why the first story in this issue is about cracking wise at the entire superhero comic book genre.  The justification for this is that one of Robotniks robots is caught with a huge stack of comic books (a crime punishable by death in the glorious robo-empire) but the leather clad beefcakes on the covers start to give Robotnik ideas on how to stop that pesky hedgehog!  TO THE ROBOT-A-TRON!! 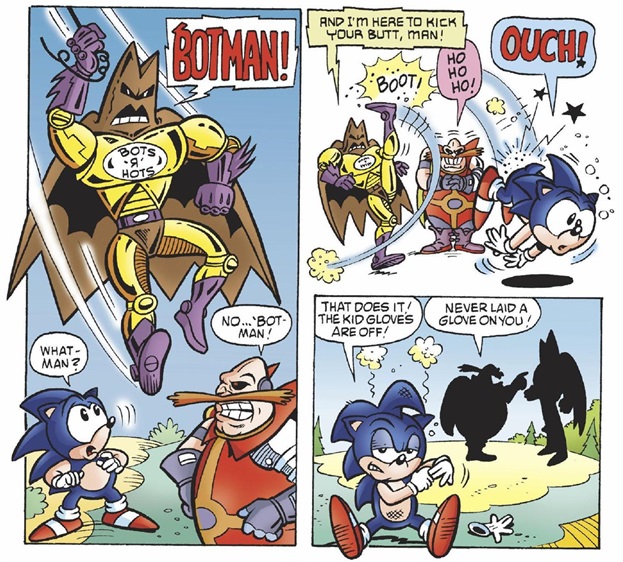 END_OF_DOCUMENT_TOKEN_TO_BE_REPLACED

We’re back with more comics about our favorite Mickey Mouse knockoff!!  We’re still very much in the early days before this comic really got a sense of what it was going to be other than a funny book companion to the video games, but even if it’s just a fluff series, it can still be enjoyable if they know how to tell good jokes and come up with interesting one shot ideas.  Do they manage to pull that off in these two issues?  Let’s find out!!

This issue, at least for the first half, a tie in to Sonic Spinball which I’m pretty sure is the only Sonic game that takes place in the Sat AM universe.  Well, I DO have my suspicions about that Sonic Generations 2 game or whatever it is coming out in 2017 (the tagline is Join the Resistance) but until that’s confirmed, this is the only Sat AM tie in game.  Unfortunately, that ALSO means that nothing of particular consequence is going to happen here as trying to tie any great continuity (that’s only barely getting established in the first place) to a pinball game is probably not the best idea long term.  But since we might as well get into it, the issue begins with the Freedom Fighters storming one of Robotnik’s factories to take him out once and for all (you KNOW they’re serious because Boomer brought a hammer), but the find it completely deserted and with a letter pinned to the front door informing them that Robotnik’s base of operations is now inside of volcano.  Probably not the WORST idea as far supervillain lairs go, but the addition of rails to get people easily through the facility may have been something he should have decided against.

“Blasts!  Why did I bother installing those in the first place!?”     “We asked you about them SEVEN times before going into construction, but you were REALLY adamant about it.”     “Are you talking back to me, smart guy!?”

END_OF_DOCUMENT_TOKEN_TO_BE_REPLACED

So it certainly has been a while since I last touched upon the Sonic the Hedgehog comics, and I decided that, especially in these early issues, things will need to be sped up a bit; especially considering the kind of comics the early issues are.  There’s no real continuity or story progression here as each issue has several self-contained episodic adventures, some of which can be only a single page, so trying to recap these issues is akin to trying to recap like two weeks’ worth of Garfield comic strips.  To that end, I’ll mostly focus on the larger stories (there’s at least one per issue) and will focus on anything that either expands the mythos and lore, or just simply grabs my attention.  With that, lets’ get started!!

The only thing of significance in this comic is the introduction of Coconuts, Scratch, and Grounder; the primary antagonists of The Adventures of Sonic the Hedgehog (as opposed to the Sat AM series).  Sonic naturally kicks the crap out of all three of them (I’m assuming they’ll show up again in future issues) and then the rest of the comic is one offs with requests for reader mail at the end of each one.  There’s a cute bit here with readers submitted their own origin stories for Tails and his two tails and the rest of the filler is mildly amusing, but it’s just that; filler to pad out the comic and excuses to come up with WAY too many puns.

Make it stop!  IT’S TOO MUCH!  I can’t take the PUNishment!!

END_OF_DOCUMENT_TOKEN_TO_BE_REPLACED

Well THIS is certainly something new!  Normally I stick to movies and TV shows, but I’ve been on a bit of a Sonic the Hedgehog kick recently and I figured there’s SOME way to share this recent interest with all of you.  I don’t have the courage to do a recap series for Sonic X (yet) so for now, we’ll take a look at the comic book series which has been running for over twenty years!  SERIOUSLY!!  This particular book (Sonic the Hedgehog) has been running since 1993!!  Well we clearly have plenty of material to work with, so we might as well just jump right in with the first issue!!

So how did they decide to begin their comic about a child friendly mascot fighting a robot master?  With our hero getting lynched of course!!