There are SO many movies that I needed to catch up on.  I could have seen Midway, Harriet, Black and Blue, but nope!  Given the opportunity to catch up on SOMETHING that might have had some sort of message or Oscar aspirations, I went with the John Cena family film.  You may not agree with the choices I make, but I stand by them.  ANYWAY!  Mr. Cena hasn’t had quite the meteoric rise to stardom as his wrestling counterpart Dwayneson The Rockson Johnson, but his comparably sparse filmography is compensated with a lot of quality films.  The Marine was a fantastic little B action film, he got a lot of praise for his appearances in Trainwreck and Sisters, and Blockers is an uproarious funny comedy with a lot of heart where he manages to hold his own against seasoned veterans such as Ike Barinholtz and Leslie Mann!  Okay, he had a brief role in Daddy’s Home 2, but no one’s IMDb page is spotless.  The point is that John Cena seems to be following the same trajectory as Daniel Radcliffe or even his wrestling contemporary Dave Bautista; people who have already made all their money and so they can be choosy and experimental with the roles they decide to take.  The question then becomes, is there something in this Nickelodeon comedy about firemen watching a bunch of bratty children that rightfully drew Cena to the role, or is this a huge misstep for a guy who’s been savvy enough to avoid them for the most part?  Let’s find out!!

Jake Carson (John Cena) is the head of a unit of Smokejumpers in the California wilderness; saving lives, looking cool, and never wavering from their sense of duty!  Cena in particular has a bright future ahead of him as the current Commander of the state’s Smokejumpers (Denis Haysbert) is looking to retire soon and Cena is on his short list, so all he has to do is make sure his firehouse located deep in the forest is ship shape and ready to impress!  With his faithful crew of Mark, Rodrigo, and Axe (Keegan-Michael Key, John Leguizamo, and Tyler Mane) working hard to keep things in order, there’s no WAY he’ll blow this opportunity… right?  Well as it turns out they get a call about a burning cabin in the woods where they find three children, Brynn, Will, and Zoey (Brianna Hildebrand, Christian Convery, and Finley Rose Slater), unharmed and yet without their parents nearby.  Since Jake and his crew were the first on the scene, it is incumbent upon them to keep these kids safe at the firehouse until their parents turn up which turns out to be no small task for the rigid and humorless Jake who soon learns just how easily he can lose control of the situation!  Can these four smoke jumping superhero dudes survive a weekend with three bratty kids?  Are they REALLY this obnoxious for seemingly no reason, or is one of them actually scheming behind their backs and looking for the right opportunity to strike?  Seriously, if you were caught in a fire and needed rescuing, wouldn’t you want these guys to do it?  John Cena, Obama’s anger translator, Luigi from the Mario Bros movie, and the guy who played Michael Myers?

I almost can’t believe these word are coming out of my mouth (or at least being typed here on the page), but this movie was actually pretty awesome!  Slide your expectations down a bit due to film being aimed at kids, and you’ll find a genuinely funny and occasionally heartwarming little story about caring for others and finding your own dreams instead of worrying about someone else’s!  I mean it’s not some hidden masterpiece that will sweep the Academy Awards (certainly not for it’s by the numbers screenplay), but it is astounding just how much effort was put into a movie that should have been absolutely dreadful to sit through.  I mean think of the premise; a bunch of kids who act like exuberant brats make a bunch of tough guy firefighters miserable until they become big ol’ softies.  You’ve seen A THOUSAND of these Kindergarten Cop rip offs many times before, some of which starring John “The Dwayne” Rockson (and some of which by this very director), and yet there’s something special here that had me in stitches for a fair bit of its run time!  What I’m saying is that this movie is better than Frozen 2… and now I’m going to hide in a hole until everyone puts the pitchforks away. 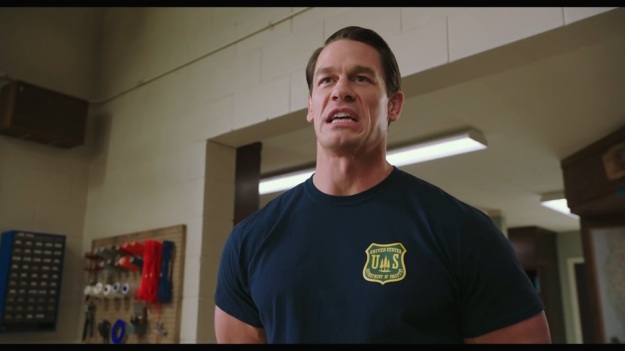 Don’t make me send John Cena after you for waving those torches around!

To try and put the genius of this film as succulently as possible, it’s the kind of movie that shows what genuine TALENT can do with a mediocre script and decent budget.  So many times we get movies that have all the resources in the world and yet end up being boring without much pizazz or flavor to it.  The filmmakers here, and especially the cinematographer, looked at each scene and actually WORKED to make it as great as possible; using the rather bland words on the page as a starting point from which to build an incredibly creative looking and well put together comedy.  How often would you say that simple FRAMING is enough to make you laugh!?  And yet here in this movie, the characters are arranged in such a way in each shot that it can get a mild chuckle out of you!  Nothing big, but it’s a sign of the commitment the filmmakers had to making every shot MEAN something; for it to have value other than just connecting the bigger set pieces together.  Keagan Michael Key in particular seems to be on the exact same wavelength as the filmmakers, but everyone in here is trying their hearts out with their movements and timing that work along with the filmmakers’ camerawork to make for some really hilarious scenes and some utterly absurd premises.  There’s a dude in this movie named Axe who, wait for it… always carries a giant axe.  I mean that’s brilliant right on its own, but the way the actor plays it, the way the camera holds on him for a just a second too long to make it awkwardly funny, and the way he’s always framed to be as big as possible whenever he’s on screen, that just goes to show how much each individual element of this production fit together to make the most out of what they had to work with. 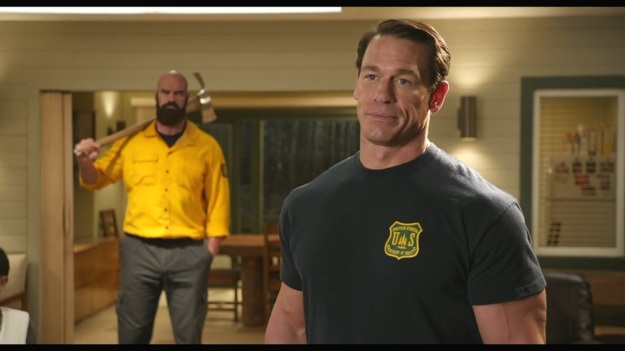 In fact, let’s dive right into the acting!  John Cena is not quite up to the level he was at in Blockers (I think the PG rating is constraining him a bit) but the guy’s natural charisma and penchant for self-effacing comedy is put to great use here.  He even gets to show a bit of his sensitive side which is kind of wasted on such a fluffy movie, but once again I appreciate the effort that went into the film when it could have skated by doing much less, and in this case Cena could have easily sleepwalked through his role but instead gives a rather compelling performance throughout.  The real star however is Keegan-Michael Key who is more on point with his comedy here than he’s been since Key & Peele.  At least for me, there was never a scene that he was in that didn’t get a laugh out of me and it’s such a relief to see that he IS still capable of being this funny when given the right material which sadly he hasn’t had for quite a few movies now.  The other actors are fine as well with John Leguizamo as the overly sensitive ex-con and Judy Greer as the scientist love interest for John Cena, and while their roles aren’t as INSPIRED as Key’s, Cena’s, or even Mane’s, they pull their weight and find their own unique moments to shine within the film.

Where the movie falters however (and this is where I return to playing the old man shouting at clouds) is the script and ESPECIALLY the kids.  I just did not take to the kid actors in this or to any of the ridiculous things they had to do in the movie.  While the fire fighters are all pretty strongly written all things considered, the kids are just oblivious agents of chaos who seem to have no sense of fear, consequences, or priorities.  The ways in which they utterly tear up this firehouse tend to be more on the annoying side than the funny side and the kids just aren’t charming or even sinister enough to make the set pieces work.  Their broader story is also kind of a mess with a lot of questions that REALLY needed to be answered but are completely ignored.  Without spoiling anything there’s also an organization that comes into the picture at one point and I’m never a big fan of when THIS particular group is portrayed so negatively.  I mean granted I’m sure you can find bad stories about THAT particular group, but it always seems like a cheap shot for them to be so utterly uncaring and cold blooded for the sake of it; especially when their presence in the movie ends up being so perfunctory.  I mean look, the filmmakers did everything they could to jazz this movie up with great sight gags, engaging cinematography, and a great cast of comedians to fill out the adult roles, but there’s only so much they can do to polish a turd which is exactly what this script is.  Speaking of turds, there is a poop joke in this movie and it’s about as funny as you’d expect; by which I mean not funny at all.

“OH, IT’S AWFUL!!  I’VE NEVER SEEN ANYTHING LIKE IT!!  HOW CAN ONE PERSON PRODUCE SOMETHING SO FOUL!?”     “Look, I don’t like the scene either, but whining about the script isn’t gonna make this go any faster…”

Is this one of the best movies of the year?  HECK no!  Blockers ended up not making the cut last year and this movie is no Blockers.  Still, considering the pomp and circumstance that comes with a lot of films around this time of year, even when it comes to the kids movies (*cough* Frozen 2 *cough*), it’s kind of gratifying to be reminded that you don’t need awards buzz, long run times, or even a particularly deep story for a movie to be a lot of fun and ridiculously funny.  It’s kind of hard to say I’d recommend seeing it in theaters when there are genuinely great movies I’d recommend seeing over it like Parasite, The Lighthouse, and Knives Out, but if you’ve got an afternoon to kill and are looking for something on the lighter side, then this might fit the bill.  Now if they’re looking to make a sequel, I could always get started on that fan fiction idea…