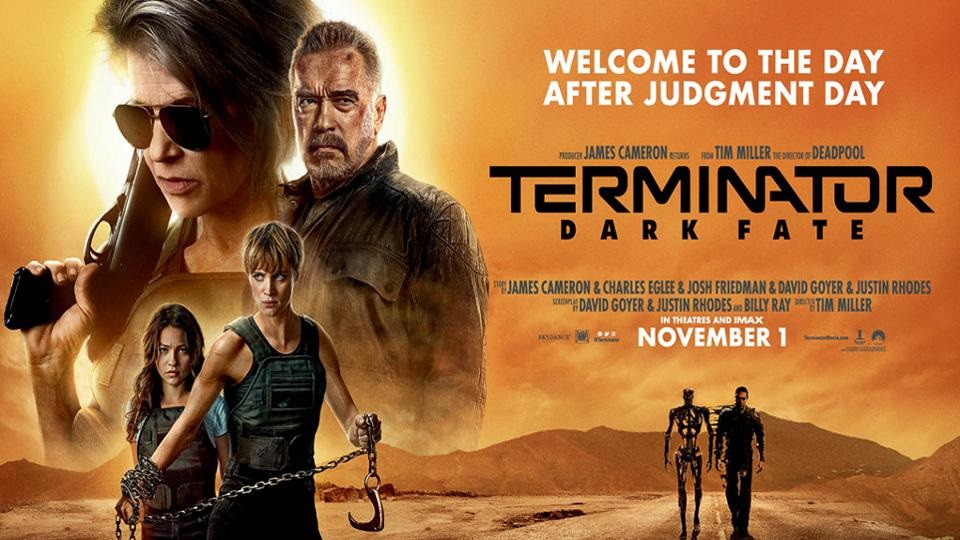 Terminator: Dark Fate and all the images you see in this review are owned by Paramount Pictures

Terminator Genisys came out right when I started reviewing movies for this website and BOY was I being thrown into the deep end as far as having to write about wretched movies!  The fact that someone is actually trying to come back from that disaster is either a show of great arrogance or of great faith in the material because you couldn’t possibly have salted the Earth in a worse way than with that piece of self-aware trash; even if you get James Cameron back as a producer.  Dude produces a lot of thing is what I’m saying!  Do you remember Sanctum?  Of course not.  ANYWAY!  Does this new attempt to breathe life into this franchise produce at least one more fun adventure, or would we have had a better chance getting this to work again if we stuck it in a bag of rice?  Let’s find out!!

Decades after Doomsday was avoided and Skynet was destroyed, the world seems to be at… well I wouldn’t call the current situation PEACE, but we’re staving off the techno-apocalypse for the time being if nothing else.  Dani Ramos (Natalia Reyes) is just going through her day to day life of helping her brother with his music, taking care of her sick dad, and working at a car factory (that’s what those things are called, right?) when things start to get a bit strange.  Her dad shows up out of nowhere at her job, some giant blonde lady shoots him in the face right in front of her, and then it turns out dear old dad was a robot.  This seems bad even by Monday standards, but she goes along with the gun toting woman named Grace (Mackenzie Davis) who informs her that her chances of living are contingent upon her ability to be depart with her post  haste!  It doesn’t take long for Dani to learn (and even less time to accept) that she is in fact being hunted down by future robots who want her dead for some very important reason, and that Grace is a cybernetically enhanced human from the future as well who was sent to protect her.  She certainly makes a game effort of outrunning the robot (Gabriel Luna), but this dude is a K-Reve unit which is basically a SUPER T-800 combined with a SUPER T-1000 and it doesn’t take long for their backs to be at the wall.  If ONLY there was a character from this franchise that could save them before it’s too late!  Oh that’s right!  They threw a bunch of money at Linda Hamilton so Sarah Connor comes in JUST at the right moment to save the two of them and buy them all some time to regroup, figure out what’s going, on and how they can stop this latest threat to the future.  Can Grace fulfill her duty of protecting Dani from this mechanical menace, and why was she chosen for such an important mission?  What is Sarah Connor’s role in all of this, and what has she been up to since the events of T2?   Is Schwarzenegger’s role in this a cleverly explained bit of time travel trickery, or is the will of the producers of Paramount Pictures the most powerful force in this Terminator universe?

For a franchise that’s been dead, buried, resurrected, dead, again, and then beaten like a dead horse, I didn’t think there was anything that could make this franchise relevant and in the least bit respectable again.  Boy was I WAY off the mark on this one because this movie was GREAT and is easily the best movie since T2!  It’s like every mistake of the last three terminator movies has been carefully examined and tactfully avoided while still manages to gleam a few bits here and there from those movies that actually DID work and use them to their fullest potential.  It’s like the exact opposite of that awful Genisys movie that thoughtlessly tried to emulate what people liked about the other films and for all its effort ended up being an utter snoozefest.  This movie has actual thought behind it and wants to be more than just a reminder of how great the earlier Terminator films but to be among its ranks with a bold determination to shake things up for the better, and in every way that mattered they succeed.

From the outset, it’s clear that this is not going to be like any Terminator movie we’ve seen recently; especially now that they have the R rating back.  There’s a noticeable grit to everything that grounds the narrative and the aesthetic in a way that feels closes to Salvation which may have had a bland and unnecessary plot, but did a great job of creating a believably oppressive atmosphere that constantly reminded you how desperate humanity’s situation is; brought to life by the fantastic performances from everyone involved.  Linda Hamilton is fantastic as she brings alot of weight and weariness to the role after all this time, Mackenzie Davis is immediately the standout and has a long future in action films if that’s what she wants to do, and Natalia Reyes is great as Dani with the more thankless of the roles as she’s the most important character while also having the least to do.  Oppression however is really the name of the game here as we’ve returned to the chase narrative with only one terminator, but they’ve added further complications that were only somewhat there in previous films.  Robert Patrick being a cop in T2 was hardly subtle, but this film cranks up to eleven as the new terminator (who looks like a cross between Miles Teller and Adam Driver) uses the modern day surveillance apparatus to find our heroes and uses institutional forces against them; especially a particularly charged sequence in an ICE detention facility.  Is it truly illuminative about the situation at our border or merely exploitative of a hot button issue?  Well it SEEMS to be on the right side of things as ICE is represented as a bunch of jerks that are easily fooled and swift to turn a blind eye, but it’s still in service of a cathartic action scene more than making a point in its own right.  Overall it’s just got a lot more bite than we’ve seen in a while and the perfect direction to take things after the blandly horrific Genisys.

What really sets this one apart though is the way it constructs its narrative which puts a lot of the mystery and world shattering gravitas back into a franchise that long ago devolved into empty fan service.  The best way that I’ve been able to describe what I mean here (which still sounds really clunky), is that you know how a film franchise will sometimes have a TV spinoff with its own set of characters BUT THEN there’ll be a movie that finishes off the series and ties it back into the movies?  Think of stuff like how Highlander Endgame brought the TV series and movies together, or how Star Trek Generations brought the original and the Next Generation crew together.  Okay, so imagine the best possible version of that but with a TV show we never got to see!  Terminator Genisys made the franchise feel really small by condensing everything we know about the franchise into a reductive mess of maybe five important people, while this movie blows up pretty much everything we’ve known up to this point and gives us reasons to want to invest in the lore once again.  There’s a throwaway line from Sarah Connor about how she wound up on an episode of America’s Most Wanted, and I would pay SO much money to see them actually make that episode.  The sequence with them in the ICE detention facility feels self-contained in the way an episode from a TV show would (even shows with ongoing narratives) and I can only just imagine what other shenanigans they could get up to!  Heck, we haven’t even talked that much about Schwarzenegger, and his story is so bizarre (and admittedly a BIT tacked on), but that I want to see it play out in like a twelve episode mini-series!  It’s a world that feels so rich with possibilities and it almost seems like they achieved it by accident considering how effortless it all feels, and especially with how badly the sequels failed to.

There are two issues worth discussing in this movie.  First is that there’s a fair bit of clunkiness throughout; from certain beats in the narrative to the suboptimal special effects.  Arnold is no doubt COMPLETELY shoe horned in here which ends up being fun for the most part, but is kind of oddly stitched onto this story instead of more gracefully integrated into it.  The effects are fine for the most part, but the more hectic moments that require CG recreations of characters don’t always look great; especially when they’re also in real environments and not artificially constructed ones.  A very early fight scene in a car factory has Gabriel Luna turning into a CG dude to do a few jumps and it’s pretty clear when he it is and isn’t the actual actor.  I usually don’t get hung up on stuff like that, but it feels like even a step down from what I remember of Salvation that took full advantage of its budget.  The other issue is that while I REALLY do love everything about this, from the story they’re telling, the humor throughout, and the way they play with the film’s scope and world building, there wasn’t a WHOLE lot of emotional impact for me.  It felt like they were REALLY trying to set off the waterworks in a few key scenes, but I just didn’t feel a whole lot when those happened which may be more my fault for being a cold calculating machine myself, but something felt a bit lacking.  It might be the terminator himself as they have yet to make a guy as scary as Schwarzenegger or Robert Patrick in the role and while this guy does a fine job he’s not going to be an iconic part of the franchise going forward the same way that Grace and Dani will no doubt be.

The movie’s already bombed for the most part and there are plenty of “dudes with opinions” trying to dunk on this movie for… whatever reason it is this time.  Once again a solid barometer for a good movie is who thinks it’s a bad movie, and this is ABSOLUTELY a good movie!  PLEASE go out and see this if you have any interest in the franchise; not just because I’d REALLY like it if it was more successful than Genisys, but because it is that good at bringing something fresh to the franchise and is a darn good time in its own right!  Please don’t give them a reason to bring back Jai Courtney!  I know he was good in Suicide Squad, but not ready to take that chance!