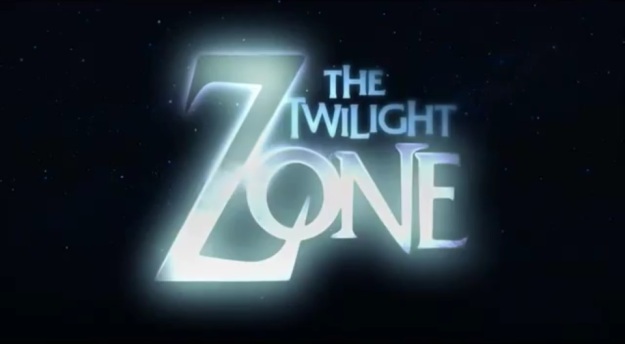 We’re back with another episode of The Twilight Zone, and not the one you were searching for on Google!  While the last episode seemed to have been ripping off or was heavily inspired by a recently released movie, this one has a bit of an older influence to it at first glance; bringing to mind the cyber punk oddities of the early to mid-nineties more than anything else.  Sure, it doesn’t have the budget of Johnny Mnemonic or The Lawnmower Man (the latter almost certainly being an influence down to the title of the episode), but can they still capture the essence of that weird and stretch of sci-fi film making into a solid twenty minute fable? Let’s find out!!

Ritchie (Lou Diamond Phillips; no seriously) is some dude who cleans pools for a living which is kind of sad considering said living has been going on for two decades now, but then again in a just economic system he’d be making a living wage instead of merely scraping by so I guess the sad part is once again a product of Capitalism.  Sadly that’s not the focus of the episode, but things do get off to a strange start as Some GuyTM straight out of a Hitchcock movie starts chatting him up about how awesome it is being a pool guy.  Getting out in the sun, visiting awesome houses, banging the lonely housewives!  Seems like an odd thing to start with when “hi” and “my name is so and so, what’s yours?” is right there on the table, but maybe he’s going somewhere with this! 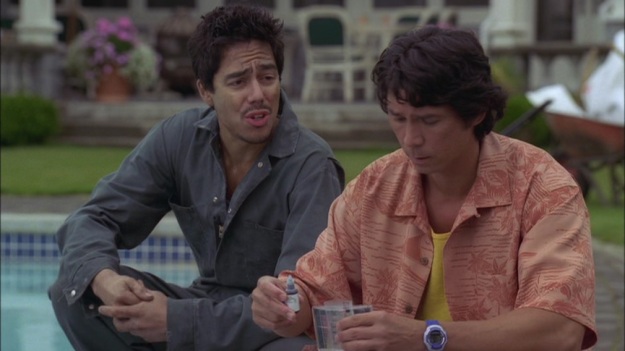 Yeah… those first two might be true though they aren’t all they’re cracked up to be, but that last one?  Sorry, bro.  Only in bad Skinemax films.  Besides, anyone rich enough for pools that nice has PLENTY of resources to make a lowly pool guy’s life a living hell.  After that odd and ominous conversation, Ritchie finishes up the pool and heads to his truck when some dude with a gun (Mackenzie Gray) tells him to wake up and…

Ritchie wakes up screaming and his roommate Lenny (Erik King of Dexter fame… or at least the first two seasons of it) has to calm him down before he wakes up the whole neighborhood.  It was all a dream, right!?  Well… probably not.  I mean The Twilight Zone and dream logic go together like Star Wars movies and obnoxious fans (utterly inescapable no matter how hard you try) so chances are that this whole “wake up” thing is like four layers of weirdness all wrapped up in an intrigue cake; not the least of which being that Ritchie has a scar where the bullet hit him which he should probably see a doctor about.  Said doctor who I will refer to Dr. Exposition (Venus Terzo) informs us that Billy’s been going to this clinic for years and that last year she advised him to see a psychiatrist for his depression and anger issues which I GUESS is supposed to plant a bit of doubt into us as to what’s really going on, but we don’t watch The Twilight Zone for Acham’s Razor; we watch it for the outlandish and the imaginative!  Okay, we watch THING Twilight Zone for silliness and bizarre celebrity cameos (SERIOUSLY, DOAKES IS IN THIS!?), but still!  The episode seems to have already sussed out my train of thought because almost as soon as she leaves to… do doctor stuff I guess, she comes back with the guy who shot him before and we get a repeat performance! 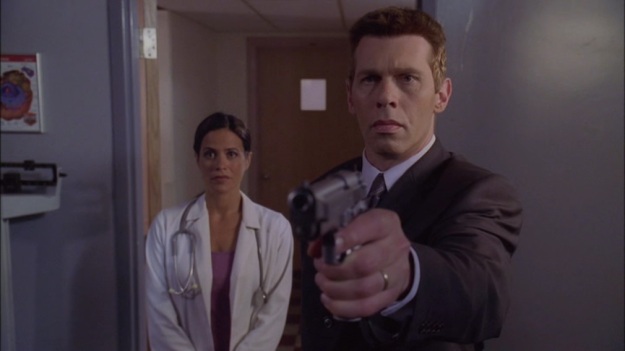 JEEZ!  That’s almost as bad as seeing the bill!  Nyuk-Nyuk-Nyuk!  Sadly Ritchie isn’t seeing the humor in all this having taken a bullet TWICE now, but at least it’s not CUMULATIVE damage because the first scar disappeared to be replaced with a new one where the second bullet hit him.  Surprisingly, Ritchie doesn’t seem too concerned with his current Groundhog Day predicament and forgoes the doctor trip to go to work.  Even if this could be just another dream, those pools aren’t gonna clean themselves!  Now unlike the first time where he has an awkward conversation with some stranger (we haven’t seen that guy show back up yet), the lady of the house (Jana Mitsoula) starts to proposition him for with some not so subtle innuendo which Ritchie is at first resistant to but eventually relents when she drops all pretense goes in for the kill.  This moment of peace is short lived however as the guy who keeps shooting him over and over again turns out to be… her husband!  TWILIGHT SHOCK!  Now instead of shooting him in the face this time, he just beats the crap out of him and calls him a loser over and over again until…

Yeah, nothing really… definitive happens at the end of that.  Ritchie just looks angry at the camera and we cut to the next scene where he’s strapped to some medical table with a thingy on his head. 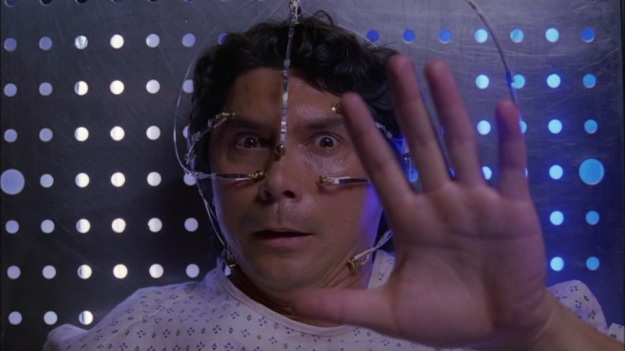 IS THIS THE REAL LIFE!?  IS THIS JUST FANTASY?  Were we watching an early draft of Source Code the whole time!?  No, not really.  All Ritchie manages to learn is that this place is called VirtuaCorp (might as well have called it SCIENCE-BUSINESS) before the guy comes back with a gun this time and tells him to wake up.  Points to Ritchie for trying to avoid getting killed this time by throwing a fire extinguisher at the guy, but he misses by like a mile and gets shot anyway.

Dude should really work on his aim.  Anyway, he wakes up back in his apartment this time and his roommate hands him a bill from VirtuaCorp (so chances are we aren’t in the real world yet) and he goes there to dispute the TWELVE THOUSAND DOLLAR CHARGE for dream therapy that he doesn’t even remember doing!  Dream world or not, heads are gonna role if someone tries to pull that on me!  Okay, he’s also trying to solve whatever mystery is going on here as he manages to sneak back into that room he work up in during the prior dream and sees that there are indeed recordings of his dream therapy, but more importantly one of the monitors starts playing a news report informing us that the shooter (a movie executive named Jerry Hunt) was found dead in his home and the police suspect… THE POOL GUY!  TWILIGHT SHOCK!! 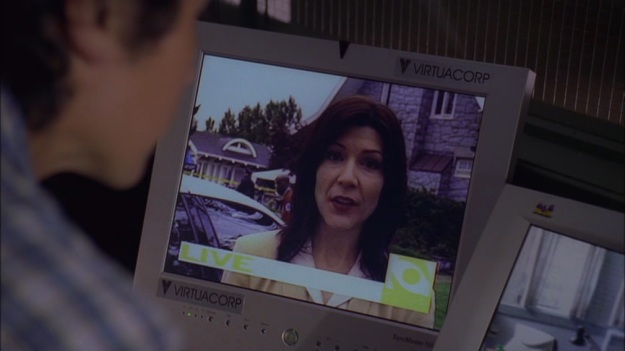 “At the very least, the man knew how to clean a mean pool, and isn’t that what’s REALLY important?”

Ritchie clearly doesn’t believe this fake dream news and runs out of the facility right into the gun barrel of Jerry the Shooter who does his thing once again.

Ritchie wakes up in his room and this time things are a bit different.  The police are already there waiting to talk to him about the murder which he’s now questioning if he did or not, but this seems to be yet another dream as the cop who comes in turns out to be Jerry once again.  Ritchie begs for his life and starts to confess to the crime in the hopes of avoiding yet another bullet, but it’s all for naught as Jerry fires once again.

Okay, so are you ready for the twist!?  Here it is!  Either by sheer coincidence or an absurdly fast turnaround time, this episode is also a rip off of Minority Report which hit theaters about four months before this episode aired.  Ritchie did in fact kill Jerry and his punishment was to sit in a vat with wires in his head reliving some bizarre recreation of the murder over and over again until he’s fulfilled whatever quota the court set for him. 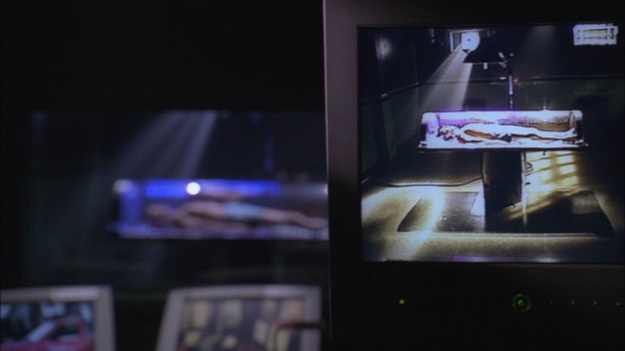 Why do you need a monitor in this room when he’s RIGHT THERE!?

Huh.  Well what does Forest Whitaker have to say about it?

“Ritchie Almares’ prison has no walls, no bars, not even a single guard.  It’s simply a state of mind from which there can be no escape.  Sweet dreams, Ritche.”

I mean… it’s not really a state of mind, now is it?  He’s in a medically induced coma where he’s forced to relive a scenario over and over again with no control or way out!  Needless to say that I’m rather dubious about the efficacy of this program which doesn’t seem to be therapeutic or even correctional in nature; rather it’s a kind of torture in the hopes that… PTSD will make people BETTER!?  Yeah… might want to go back to the drawing board on that one.  Then again, I’m sure there are plenty of people out there who would LOVE it if we just straight up abused and cause sever anguish to prisoners (or at least more so than we do now), so maybe there is a bit of social commentary going on here even if Forest Whitaker’s closing monologue couldn’t be bothered to touch on the wider implications of this.  My recollections of this episode were particularly vague, so I didn’t have many positive feelings about it prior to this recap.  After seeing it again, I think it’s still overly convoluted (we never get an explanation on who that guy was at the beginning of the episode), but there’s at least a sense of ambition to the story and I think Lou Diamond Philips puts WAY more energy into this episode than the material frankly deserves so I at least appreciate his performance in it.  It reminds me a bit of the very first Twilight Zone episode Where is Everybody which similarly had someone in a mind altering situation they could barely comprehend (the main character was stuck in a town with no people), but when we got to the conclusion it felt like there was some real weight to it where this one seems to purposely avoid that to just revel in its own twist.  Hopefully we’ll get more episodes that are about the ideas rather than the twist, but if nothing else it’s an intriguing idea that’s executed well enough.  I probably will forget this episode once again though, but hey!  In about ten years I’ll rewatch it and will be surprised it’s not half bad all over again!

If you like this recap and plan on buying the show, then use the Amazon link below!  I’ll get a percentage of the order it helps keep things going for me here at The Reviewers Unite!  In fact, you don’t even need to buy the item listed!  Just use the link, shop normally, and when you check out it will still give us that sweet, sweet, percentage!  You can even bookmark the link and use it every time you shop!  HOW AWESOME IS THAT!?

The Twilight Zone – The Complete Series