Despite its connection to a notably popular movie, I hadn’t heard a lot about this film until it finally decided to come out like a week ago.  Sure, I knew that they were making it and that the film was going to be gender flipped, but beyond that this is yet another film that completely flew under the radar for me which now that I think of it PROBABLY makes some amount of sense as it would have had to of been marketed in the last few months; i.e. Oscar season followed by a very crappy January for me.  So is this movie a hidden gem that I just didn’t give the time of day until it was staring me right in the face, or did this movie actually get shunted down the release schedule priority list to quietly slink away after a hopefully decent opening weekend?  Let’s find out!!

Ali Davis (Taraji P Henson) is a sports agent working out of Atlanta and is one of the rock star employees at her… firm?  Is that the right word?  Anyway, she consistently does great work for the company but FOR SOME REASON keeps getting looked over when it’s time to promote someone to partner, but she isn’t afraid of uphill battles gosh darn it!  If a woman has to work twice as hard to get half the credit, well she’s just gonna work TEN times as hard!  Her goal is to hire this up and coming hot shot basketball player named Jamal Barry (Shane Paul McGhie) who could be big for the firm but has a very demanding father Joe ‘Dolla’ Barry (Tracy Morgan) who is demanding and demeaning at almost every turn and making life a living heck for Ali.  Clearly she needs to relax and perhaps learn to get into the mind of men instead of just trying to compete with them, which fittingly enough would make her compete with them better!  Good thing she’s got a bachelorette party to go to where there JUST SO HAPPENS to be a psychic with magic tea that will let her hear men’s thoughts!  Well it was either that or the crushing blow to the head she received later that night, but the point is that she wakes up the next morning and is able to hear the thoughts of all the men around her; including her assistant Brandon (Josh Brener) who is the only person she’s willing to confide in regarding this new power.  At first it seems like a curse but now that she can get into Joe and Jamal’s head to find out what they really want; not to mention the men in her office who have been quietly scheming against her from day one.  Will Ali be able to close this deal and finally get the job she’s always deserved?  Just how far will she go to succeed, and how many people will she have to hurt along the way while using these new abilities?  You’d think there’d be a lot more dudes singing random songs in the movie, but I guess you’d then have to license them all. 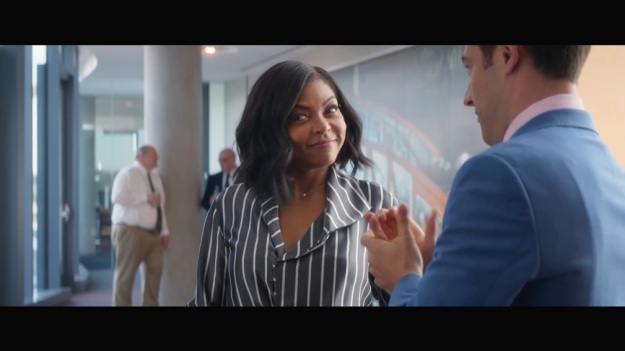 “Really?  Nothing but Ninja Sex Party songs going on up there?”

This movie was a lot of fun!  It certainly shows its modern influences compared to the original film, but honestly I have no interest in bringing up that movie any more than is necessary; mostly because I don’t want to give YOU KNOW WHO the time of day, but also because this film barely has anything to do with that.  Unless there’s a background gag I missed, there’s no indication that this is in the same universe as that which means that it’s just the same premise with a few gags that are reminiscent of what happened in the previous one; particularly the joke about reading someone’s mind while having sex.  Really, it’s kind of a mash up of a lot of different movies with What Women Want being just one of the influences here, and frankly Taraji P Henson is so much better than this kind of goofy premise deserves that she elevates the material just by showing up.  It’s certainly not a classic but at least this one doesn’t have… well you know who in it. 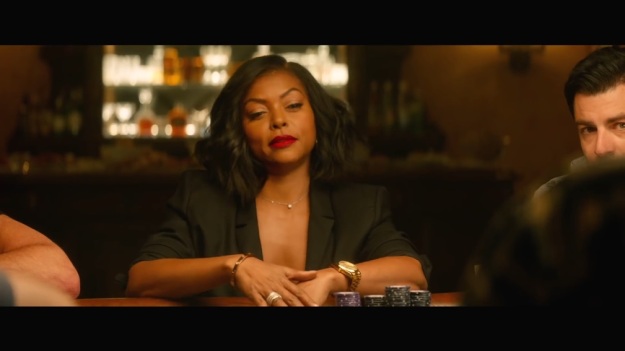 If he tried to yell that crap with her around, he wouldn’t have been able to finish due to his head being shoved ALL the way up his own colon.

With any comedy you want to have an idea of the good to bad joke ratio and if there are any real bombs in there that will kill the mood.  While there are a few questionable moments here and there which we’ll get to soon enough, I’d say that this has a surprisingly high hit rate for an early February comedy which is usually a spot for burn off films hoping to get a small piece of the Valentine’s Day bump.  Where the other film was just kind of late nineties bland, this one is a straight up farce with exaggerated characters, ridiculous punchlines, and Taraji P Henson acting utterly bewildered by all of it to anchor the humor in place.  They don’t really do anything unique with the idea of her being able to read men’s minds (other than one rather funny scene at a poker game), but I think there’s enough of a unique charm to her performance and the specific set up here to make it not feel like such a retread.  What actually surprised me the most is how much I was invested in the relationship between her and the guy she meets right before getting the powers named Will (Aldis Hodge) who is REALLY funny on screen and has plenty of charm to spare!  With this and On the Basis of Sex, it just might be the year of hilariously down to Earth and supportive male characters and I am SO here for it!! 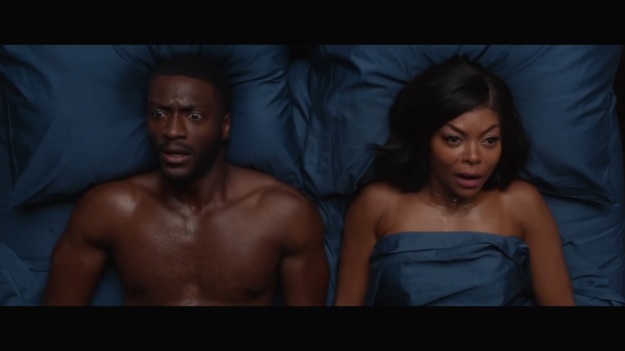 He’s a single dad and STILL has that rockin’ bod!?  Dude can’t POSSIBLY be human and I do not care!

As much as I liked so much of this movie, one of the major issues is that it’s just too scattershot to stay consistently funny.  Sure, even with a premise like this you still need to have subplots to keep things fresh and find excuses to use the powers in dynamic and interesting ways, but the thing is that they not only go WAY overboard with that, they also let that stuff get in the way of the mind reading premise.  There are rather large stretches of this movie where Taraji P Henson is in a scene where Tracy Morgan is ad-libbing or she and her assistant are doing something wacky, where her ability to read minds is just completely forgotten so that we can see whatever ridiculousness the writers could think of.  Not only that, this is also very present in the script where plot points happen at the drop of a hat with only the barest hint of it happening if we’re lucky.  The ALL IS LOST MOMENT happens because three very important characters did something OFF SCREEN that does not connect with anything we’ve heard or seen up to this point and the only way we know this has happened is because a character turned on the TV at the right time.  It doesn’t really ruin the movie as comedy can work in chunks like this, but it makes the whole movie seem a bit more trivial than it should be given the subject matter.  The thing is that there is a whole lot to dissect here regarding not just the specific premise of this film but how much it changes when done from a female perspective.  I mean think about it; ANY dude getting into the mind of a woman (much less THAT particular dude) is pretty cringe worthy at face value.  A woman on the other than though… well there’s certainly grey areas and exceptions (one we’ll get to soon enough), but it has an entirely different feel that honestly makes it even MORE ripe for comedy.  I have a hard time picturing anything as outlandish as what happens in this movie (or as manipulative as some of Taraji P Henson’s actions are) working if the roles were reversed which may be an internal bias I should be working on, but I don’t think the genders being flipped is a meaningless change.  Sadly the movie doesn’t seem too interested in poking that bear too hard which I guess is POSSIBLY for the better considering how poorly the last film handled someone with suicidal thoughts, but I still think that this movie being a joke-a-minute broad comedy that goes all over the place is a bit limiting to such an interesting premise. 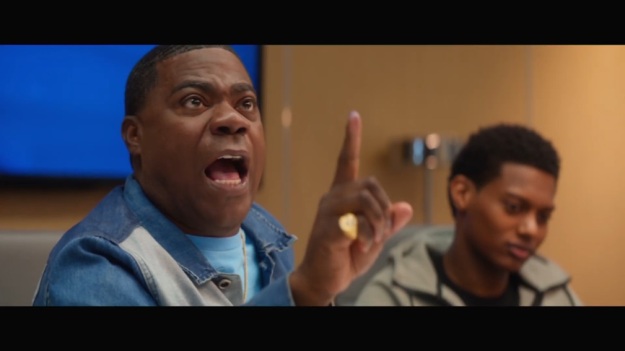 There are also some other things that are troublesome about the movie too which bring the movie down a few points.  The film has some really outdated views of LGBTQIA+ characters with Taraji P Henson’s gay assistant Brandon feeling like a cliché older than the film this is based off of, and while I did think the actor does a solid job… well first he’s not gay in real life which would have been a questionable decision on its own, and second the character is from top to bottom a stereotype who’s mannerisms are played up for laughs.  Now I guess this wouldn’t be SO bad if the movie left it at that, but there’s another character who’s an obnoxious bro, but UH-OH!  He’s gay too which Taraji P Henson finds out by reading his mind!  So on top of Brandon’s over the top gay-sidekick performance, we ALSO indulge in the idea that toxic masculinity is a cover for homosexuality; not to mention that she reveals his sexuality to her assistant which is straight up outing someone.  Oh, and one of the ways that THE BRO makes his obnoxiousness known is that he believes Taraji P Henson is a dude in a dress.  Even if it’s coming from a character who’s written to be “the jerk”, this is still meant to make THE AUDIENCE laugh as well which means that Transphobia and GAY PANIC are topics that the filmmakers found perfectly acceptable to laugh about.  Ugh… you know, I REALLY did like so much of this movie, but these jokes take a lot of the wind out of my sails and will certainly be even worse for plenty of other people unfortunate enough to hear them. 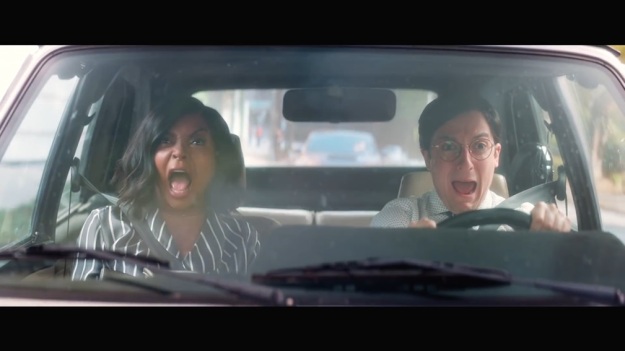 When you take the good with the bad, the solid premise with the sub-par execution, and the solid performances with the outdated stereotypes, I think the movie comes out just a tad bit further ahead than a lot of other comedies like it.  It’s certainly its own animal compared to the original film which is what you want from what is KIND of a remake, and Taraji P Henson proves to be very good at selling material that is most certainly beneath her caliber as an actor.  I KIND of recommend checking it out in theaters, mostly because we’re still in the dry months and this is better than a lot of the competition out there, but it’ll probably work best watching it at home or even skipping it entirely if the bafflingly outdated LGBTQIA+ representation in the movie is a (very understandable) sticking point.  How about Paramount makes it up by having the next one be about a lesbian who can hear straight people’s thoughts or a non-binary person can hear the thoughts of those who DO identify as binary?   I mean considering where they stumbled here it probably wouldn’t turn out as great as it should but it’d be worth a shot, right!?