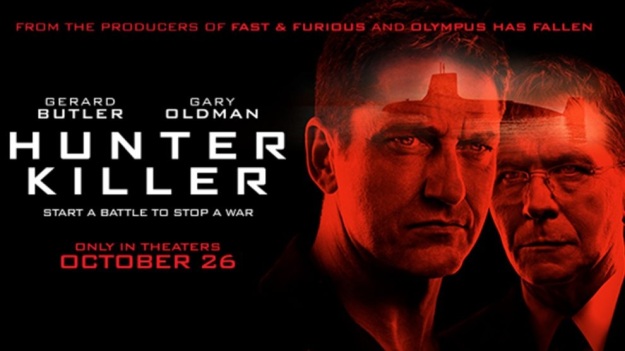 Ugh… you know what’s worse than being sick for two weeks?  Being sick for two weeks and then getting better JUST IN TIME to see Hunter Killer.  I didn’t get to catch Can You Ever Forgive Me while it was at the nearby theater!  Oh no, I have to drive out of town to see it now if I’m lucky, but the latest Gerard Butler vehicle?  Why that’s just a hop skip and a jump away!  I’m sure I’ll be cursing my recent good heath by the time this is over, but I guess you never know until you see the movie itself, do you!?  I mean sure it LOOKS like a generic submarine thriller starring America’s Fifth Favorite Action Figure, but… I guess it could be a FUN version of that!  Let’s find out!!

As the movie begins we see an American sub is following a Russian sub before getting blown away by a third sub, and so The Pentagon needs to send a second sub of their own to find out what happened.  Not just anyone can pull this mission off however!  Oh no, they need a PROFESSIONAL hard ass with a heart of gold and a bladder of titanium!  They need… JOE GLASS (Gerard Butler)!  Joe takes the USS Arkansas along with a crew of very professional character actors to see if they can find the original US sub, and after a rather intense skirmish with a Russian sub (presumably the one that shot down the first American sub), they manage to find our sub… as well as their sub.  Yes, it seems that the original Russian sub had been sunk somehow and JOE GLASS needs some answers!  While all this is going on, Admieral Donnegan (Gary Oldman), Rear Admiral Fisk (Common), and NSA analyst Norquist (Linda Cardellini) are coordinating an effort to get a squad of US soliders on Russian soil to find out if President Zakarin (Alexander Diachenko) is up to no good!  Said team is led by Lieutenant Beaman (Toby Stephens) along with the rookie Martinelli (Zane Holtz) and two other guys who find that things may not be as simple as we initially thought and that Zarkarin might be in danger himself.  Will JOE GLASS find the answers he’s looking for on that mysteriously sunk submarine?  What can Lieutenant Beaman and his crew do now that they know that something is up and they are the only ones in position to do anything about it?  With so much danger under the sea, will this sub sink faster than Gerard Butler’s career!? 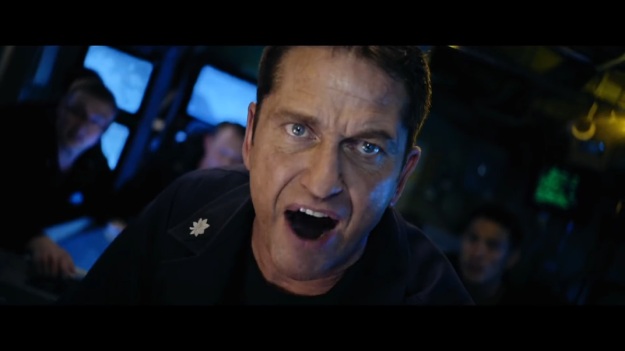 You know what?  This movie isn’t as bad as I thought it would be!  I mean seriously, a military jingoistic thriller starring the dude who once said “Go back to fuck-head-istan”?  A film that looks to have been shelved for almost two years now just like the LAST big Gerard Butler blockbuster?  Come to think of it, I actually enjoyed Geostorm for its cheesy charm, but then again this movie is no Geostorm.  Not even CLOSE!  It’s a competently put together action film that hits the necessary marks for a submarine film and manages to have a solid conspiracy plot without veering that far into unsavory political grandstanding which is surprising because again, this movie stars a dude who once said in a movie that ACTUALLY played in theaters “Go back to fuck-head-istan”.  It’s far from a masterpiece or even a film I’d genuinely recommend, but I was expecting a giant bomb of awfulness going into that theater and instead it was an intermittently entertaining though somewhat tedious distraction.  Hey, I’ll take my victories where I can get them! 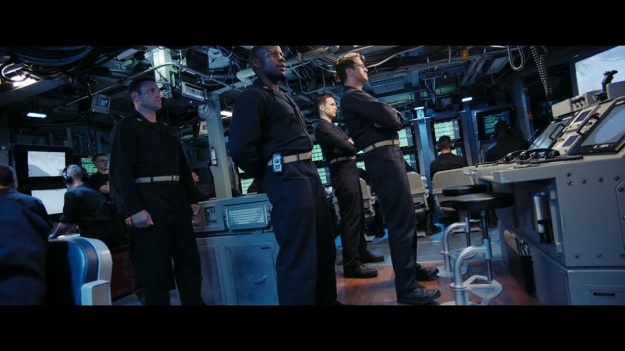 The movie works on its fundamentals even if it never really does anything unique or interesting for the genre.  It doesn’t have that sense of legacy or weight as say the new Halloween movie which is also very strong on its fundamental filmmaking chops, but as a thriller it never really has any low points or questionable decisions.  The submarine looks authentic which SHOULD be the case considering they got DOD funding on this film, and the filmmakers are just savvy enough to make you feel the tension of working in one of these things when you really need to.  Gerard Butler is fine as the captain of the ship as he’s basically made a career out of giving heroic and MANLY speeches, and they even got Toby Stephens from Black Sails to show up for this; another sign that this was made two years ago.  I’d say that, despite him being much more dynamic and compelling in his role, that the subplot with him and his troops isn’t fleshed out as well as it should be compared to the submarine section which I guess is why the marketing barely even mentions this subplot. 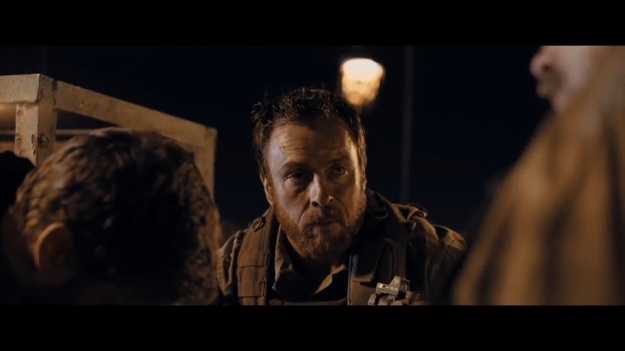 At most you could argue that its political setting feels a bit out of place what with the way that Russia has been antagonizing the US in the last few years, but I’ll give it a bit of a slide in this regard for a few reasons.  First, the film was shot in 2016 and you can tell.  When they discuss Russian aggression they mention Crimea and Syria but nothing about hacking, there’s a scene where some sailors are playing a video game and it’s Killer Instinct which came out in 2013, and of course there’s the fact that they have a woman playing the President which oddly enough makes this one of the last cinematic glimpses at a world before things turned into the daily nightmare it is today.  Because of said nightmarish existence the film does feel a bit… naïve in terms of its framing of political conflicts, but I’ll take it over whatever movie this would have been if it was made AFTER the election.  Other than that, I just found it kind of tedious in the second half as they stack crisis on top of crisis and none of them feel any bigger or more urgent than the last, so it just kind of washed over me despite each individual set piece being well put together. 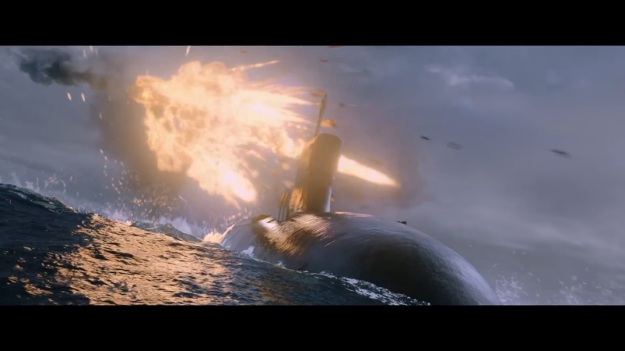 That’s about all I’ve got for this movie as it’s rather straight forward and kind of weightless, so if you’d indulge me for a moment, I had a thought throughout the movie that I couldn’t really shake and seemed to make more and more sense as the film went along.  This movie, barring of course the specific artistic flourishes and a much more character driven screenplay, is BASICALLY what I want a Metal Gear Solid movie to be.  Now obviously the movie is lacking in SO many areas and I hope that Jordan Vogt-Roberts will be able to capture the bizarre energy of that franchise in the film he’s working on, but this has the core elements that should be in a reasonably structured Metal Gear Solid game as well as a few additions that could really bring the whole thing together.  You’ve got a ground crew working to stop a major conspiracy while a submarine full of allies tries to ensure their mission is completed successfully.  Set it in the arctic (which at least SOME of this movie is at least relatively close to) and you’ve more or less got a Shadow Moses type situation there.  Heck, I’d say that Toby Stephens wouldn’t be all that bad a choice for the lead role as he certainly has the intensity to play Solid Snake.  Most importantly though, it’s straightforward and that’s gonna be the biggest hurdle to a genuinely successful Metal Gear Solid movie as the story, while pretty solid for a multi-game franchise, is in no way suitable for the big screen.  Just set up a conspiracy that’ll threaten a global war, add one or two bizarrely powerful henchmen, and make the final weapon a giant robot.  None of that Fox Die crap or like seven levels of conspiracy; just Snake, a mission, and a submarine full of allies who are ready to back him up.  Hopefully the ACTUAL Metal Gear Solid film will be WAY better than this film here, but even being as good as this mediocre boat movie would honestly make it one of the better video game movie adaptations out there. 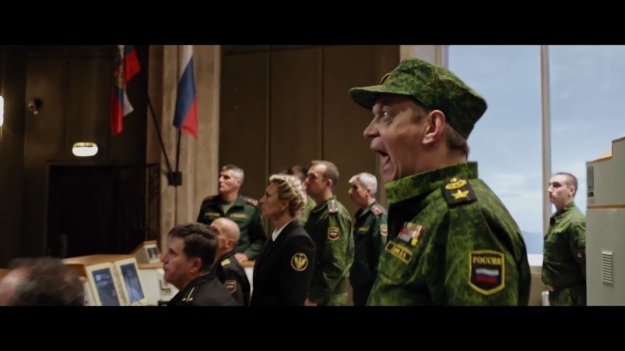 I’m pretty sure this guy was supposed to turn into a lizard at some point.

So yeah, if it wasn’t obvious enough already by my diversion into how I would make a Metal Gear Solid movie, there’s not much to this film which is somewhat of a blessing as anything more… ambitious I supposed could have easily backfired and made this insufferable instead of just banal.  It doesn’t have the wild fun of Geostorm but is certainly less heinous than London Has Fallen, so I guess it’s somewhere in the middle of those which isn’t the MOST favorable position to be in but… well at least it’s not London Has Fallen.  Gerard Butler must have recently made a Monkey’s Paw wish to ensure that his movies aren’t as negatively reviewed as they have been in the past, because everything he makes from now on basically has to pass the IS THIS WORSE THAN LONDON HAS FALLEN test and I doubt even he is capable of recreating that atrocity anytime soon.  Low expectations means that this gets a soft pass which I doubt is a quote they’re gonna use on the poster, and yet it’s still probably gonna be one of the more positive things said about this.