Ugh… you know what’s worse than being sick for two weeks?  Being sick for two weeks and then getting better JUST IN TIME to see Hunter Killer.  I didn’t get to catch Can You Ever Forgive Me while it was at the nearby theater!  Oh no, I have to drive out of town to see it now if I’m lucky, but the latest Gerard Butler vehicle?  Why that’s just a hop skip and a jump away!  I’m sure I’ll be cursing my recent good heath by the time this is over, but I guess you never know until you see the movie itself, do you!?  I mean sure it LOOKS like a generic submarine thriller starring America’s Fifth Favorite Action Figure, but… I guess it could be a FUN version of that!  Let’s find out!!

As the movie begins we see an American sub is following a Russian sub before getting blown away by a third sub, and so The Pentagon needs to send a second sub of their own to find out what happened.  Not just anyone can pull this mission off however!  Oh no, they need a PROFESSIONAL hard ass with a heart of gold and a bladder of titanium!  They need… JOE GLASS (Gerard Butler)!  Joe takes the USS Arkansas along with a crew of very professional character actors to see if they can find the original US sub, and after a rather intense skirmish with a Russian sub (presumably the one that shot down the first American sub), they manage to find our sub… as well as their sub.  Yes, it seems that the original Russian sub had been sunk somehow and JOE GLASS needs some answers!  While all this is going on, Admieral Donnegan (Gary Oldman), Rear Admiral Fisk (Common), and NSA analyst Norquist (Linda Cardellini) are coordinating an effort to get a squad of US soliders on Russian soil to find out if President Zakarin (Alexander Diachenko) is up to no good!  Said team is led by Lieutenant Beaman (Toby Stephens) along with the rookie Martinelli (Zane Holtz) and two other guys who find that things may not be as simple as we initially thought and that Zarkarin might be in danger himself.  Will JOE GLASS find the answers he’s looking for on that mysteriously sunk submarine?  What can Lieutenant Beaman and his crew do now that they know that something is up and they are the only ones in position to do anything about it?  With so much danger under the sea, will this sub sink faster than Gerard Butler’s career!?

END_OF_DOCUMENT_TOKEN_TO_BE_REPLACED

Okay, so MAYBE Atomic Blonde didn’t turn out to be everything I was hoping for, but that’s not the ONLY move I was looking forward to this year!  Who DOESN’T want to see two of the best action/comedy actors of the modern age bounce off of each other in an over the top buddy shoot’em up!?  That’s at least what we were promised in the trailers, but if there’s one thing that Atomic Blonde (and admittedly lots of other movies) has taught me, it’s that trailers aren’t always the best at telling you what a movie will ACTUALLY be about.  I know; SHOCKING revelation there!  Does the team up between these two titans of Hollywood blockbusters manage to work even better together than they do as individuals, or was this a team up worse than when Pouty Superman fought with Even Poutier Batman for no reason whatsoever?  Let’s find out!!

The movie begins with Michael Bryce (Ryan Reynolds) who is a TOP NOTCH bodyguard with his own security company that’s apparently richer than half their clients considering how styling him and his crew are, but his idyllic life of protecting the rich and powerful is abruptly brought to an end when someone he’s supposed to be protecting gets shot right the head by an unknown sniper.  He spends the next few years stewing in his own self-loathing and is stuck protecting losers and drug addicted lawyers as he tries to climb his way back to the top.  An opportunity presents itself though when super hitman Darius Kincaid (Samuel L Jackson) is to be brought before an international court to testify against the Belarusian Dictator (Gary Oldman) who everyone seems to know committed NUMEROUS war crimes, but only Kincaid has the evidence… for some reason.  Michael is given a chance to possibly redeem himself if he can get Darius to The Netherlands in one piece as the Belarusian Dictator is sending out a lot of hired goons to put him in a body bag before he can testify.  That’s not the REAL problem though.  No, what’s REALLY gonna make this the mission from hell is that Darius is a TOTAL asshole who likes to do things dirty which clashes with Michael’s preference of being clean and professional about everything he does.  It’s like The Odd Couple, but with guns and a lot more swearing!  I don’t recall Walter Matthau calling people mother fucker before shooting them in the head!  Can these two get along JUST long enough for Darius to testify and put that dictator behind bars once and for all?  Will Michael finally redeem himself and get his life back on track after delivering Darius to the international authorities, or will he end up shooting him in the head out of sheer frustration before that?  Seriously, does Samuel L Jackson own the rights to the words mother fucker?  He HAS to be getting royalties considering how much he says that!

END_OF_DOCUMENT_TOKEN_TO_BE_REPLACED

While Michael Keaton is out there making his comeback off of Birdman and Spotlight, one of his leading man contemporaries of the nineties, Kevin Costner, is trying to rebuild Is career off of Superman cameos and sports movies.  Sure, Michael Keaton was in the Need for Speed movie and the Robocop remake, but at least he’s spending his time in between cash-in movies doing Oscar caliber work to keep himself respected in the industry and not just relevant at the moment.  Still, Costner has some serious talent and seems to be working towards artistic relevancy even if it hasn’t panned out so far so there’s hope yet that he can get back to or even surpass his peak relevance when Dances with Wolves was tearing up the Oscars.  Will Criminal be the movie to bring Costner back to leading man status, or will this be yet another mistake to knock him down a peg toward total irrelevance?  Let’s find out!!

The movie begins with good ol’ Ryan Reynolds as a secret agent (again) who’s doing all sorts of spy things without any real context for the audience.  He’s carrying around a bag of money with a passport inside, so clearly this is some sort of rainy day fund for either himself or for someone else.  It’s clear that that rainy day has come however as he’s being tailed by a red headed bad guy (Antje Traue) who’s working for the main bad guy Xavier Heimdahl (Jordi Mollà) and they’re trying to stop Ryan Reynolds  from… doing whatever it is he’s doing.  He does the best he can but I’m guessing the guy was shooting during his lunch breaks from Deadpool, so he gets caught and murdered by the bad guys within fifteen minutes of the film, though apparently without giving them the information they needed.  The CIA, whom Ryan Reynolds was working for, is uber-pissed about all this and the head of this branch (Quaker Wells played by Gary Oldman) which for some reason is based out of the UK (okay…) needs whatever information Ryan Reynolds was hiding from the baddies.  So what’s the BRILLIANT idea that he comes up with?  Well… Get a world renown doctor in the field of memories (Dr. Franks played by Tommy Lee Jones) to do a SUPER SCIENCE EXPERIMENT where he essentially transfers the memories into another person.  Who’s the vessel for these new memories though?  Well for reasons (sciency reasons I’m sure), they need someone who’s frontal lobe isn’t working properly and the only person they could find is a psychotic and ultra-dangerous criminal by the name of Jericho Stewart (Kevin Costner) to play along with their Frankenstein plan and not try to escape at the earliest opportunity.  Oh wait.  After the surgery he does just that.  Whoopsie daisy.  So now we got a career criminal with CIA memories, a bad guy looking to take over the world, and I think the Russians are in the mix as well; all of whom are gonna give the CIA and Gary Oldman a brain aneurysm before this day is over.  Will the lost memories of Ryan Reynolds be enough to save the world from Xavier Heimdahl?  Will Jericho get over his angst and brooding long enough to not let the world be destroyed?  Who thought this was going to work?  Like… at all?

END_OF_DOCUMENT_TOKEN_TO_BE_REPLACED 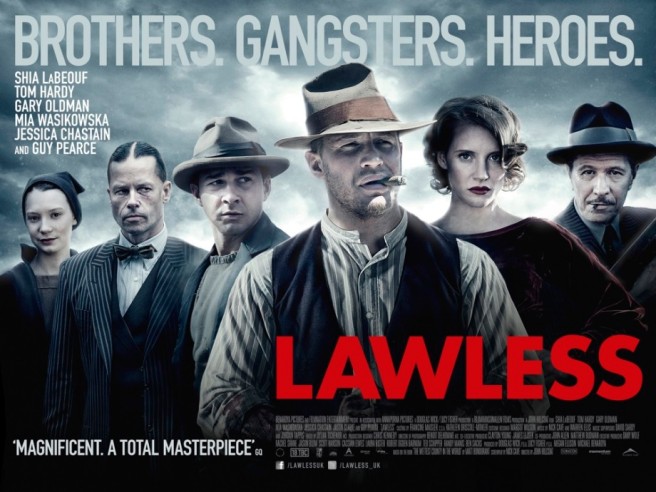 Wow.  It must be a stretch for Shia LaBeouf to play a dumbass kid who gets in way over his head, right?  Lawless stars him as one of three brothers who run a moonshining trade in rural Virgina during Prohibition, and it was the last mainstream film he’s been associated with.  Sure, he’s in a Lars Von Trier movie that’s coming out soon, but I doubt that’s gonna be in your local multiplex if you see what I’m getting at.  Despite his toxic public persona, he has been able to prove himself as an actor on a few occasions, but it’s gone far past the point where anyone want to give him the benefit of the doubt anymore.  All that said; is Lawless another example of him showing off his acting chops, or is it yet another chance for him to make a complete ass of himself?  There’s only one way to find out, and that’s to KEEP ON READING!!!