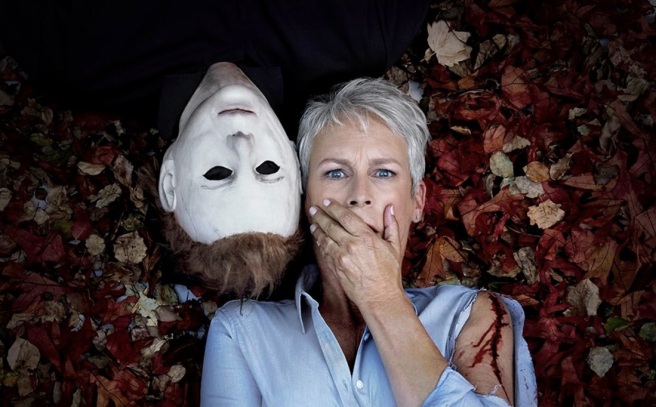 So it’s no surprise that we were gonna get another Halloween movie at some point.  In fact, last time I heard at least, it was going to be a sequel with Michael in jail on the day of his execution and running wild in the prison which would have been an INTERESTING idea I guess, it was eventually scrapped once Dimension lost the rights to the franchise in 2015.  Instead, we’re going back to basics with one last tale of Michael and Laurie resolving their differences with extreme acts of violence, and they even got Jamie Lee Curtis to take up the mantle one last time.  So now that we have a trailer, what do I think of it?  I guess I LIKE it, but I’m not in love with it.  Jamie Lee Curtis is always great, and David Gordon Green is an… interesting choice for director (this is the dude who did the stoner trifecta of Pineapple Express, Your Highness, and The Sitter), and yet it doesn’t seems suspiciously safe for a movie about a guy who commits vicious knife murders.

Just going by the trailer, the biggest problem is that they seem to have no idea what it is they want to do with this movie, and the various elements at play are completely detrimental to each other rather than working together to make a cohesive story.  Let’s start with the big one.  Laurie Strode is no longer Michael Myers’s sister and this is presumably because we are ONLY following the events of the first film; not even the second one which took place on the same night.  Now I could point out that her being his sister was FIRST established in the TV cut of the original movie which aired about a year before the sequel got released, but we’re not here to talk about fanboy gripes.  Well okay, maybe a LITTLE bit, but let’s not FOCUS on that!  My first issue is that the connection between those two characters was what ended up driving Michael to try and kill her child in Halloween four through six, and then to kill her AGAIN in H20 and Resurrection.  Without there being ANY connection between him and Laurie, what’s to bring him back to her doorstep?  What will end up enticing him to go after HER specifically, and frankly what is the reason for her to be so obsessed with him?  I don’t want to downplay the trauma that she clearly went through which is one of the more interesting aspects of this trailer, but I can’t help but feel that what they ripped out from the sequels (or at least Halloween 2 if nothing else) is what they NEED for the plot of this movie to happen in the first place.

What’s even more disappointing is that even though they COMPLETELY chucked out the continuity, they’re still relying so much on iconic imagery to sell this movie to the point that it doesn’t make sense within the universe of the film.  Michael Myers killed quite a few people that Halloween night, but it was only THE ONE TIME.  Without the sequels and subsequent lore, there’s no reason for anything about him and his crimes to be treated all THAT special.  The movie makes a HUGE deal of revealing the mask which is accompanied by a rising orchestral stinger, barking dogs, and the deranged laughter of the damned… and yet because it was just THE ONE NIGHT, we have no reason to believe that it has that much significance to Michael.  Everyone’s still treating this guy like he’s still responsible for dozens of deaths on many nights when he’s just an old man who hasn’t seen the outside world for almost four decades.  We’ve got plenty of people like that locked up and I don’t see why THIS one is treated with such gravitas.

And the sad thing is there was a PERFECT opportunity here to USE this new status quo!  Remember, the original idea for Halloween was an anthology series where each movie would be different from the last… and that got completely derailed after capitulating on the sequel and then releasing a third film that everyone rejected.  What if Michael Myers DID escapes again, but he found a different mask?  What if he didn’t go after Laurie directly (as seems to be the case here), but she comes back to Haddonfield once she hears about mysterious knife murders?  Heck, maybe you could even have Michael Myers be a character that takes his mask off and tries to blend into society instead of just THE SHAPE who only exists to be as obviously murderous as possible!  I really don’t think there’s a need for another YEARS LATER sequel like H20 which effectively closed the book on the Laurie/Michael story, but if they’re going to do it anyway they should have at least taken the opportunity to try something different.  Say what you will about those Rob Zombie movies, they weren’t just blindly following the original formula!

I’m HOPING this is good and there’s no way in hell I’m NOT gonna see it, but this looks like a remake in everything but name and  we already got one of those.  Still, I’m a pretty easy mark for old school slasher films (I’m still quite fond of the 2009 Friday the 13th reboot) so I’ll I’m guessing I’ll still enjoy it even if it’s exactly what you expect.  Then again… we all remember how Texas Chainsaw 3D turned out, right?  It ignored the rest of the films to do a direct sequel to the original, basically used the same title, got the blessing of the original filmmaker, and even had one of the original actors in it.  Huh.  Why am I looking forward to this one again?