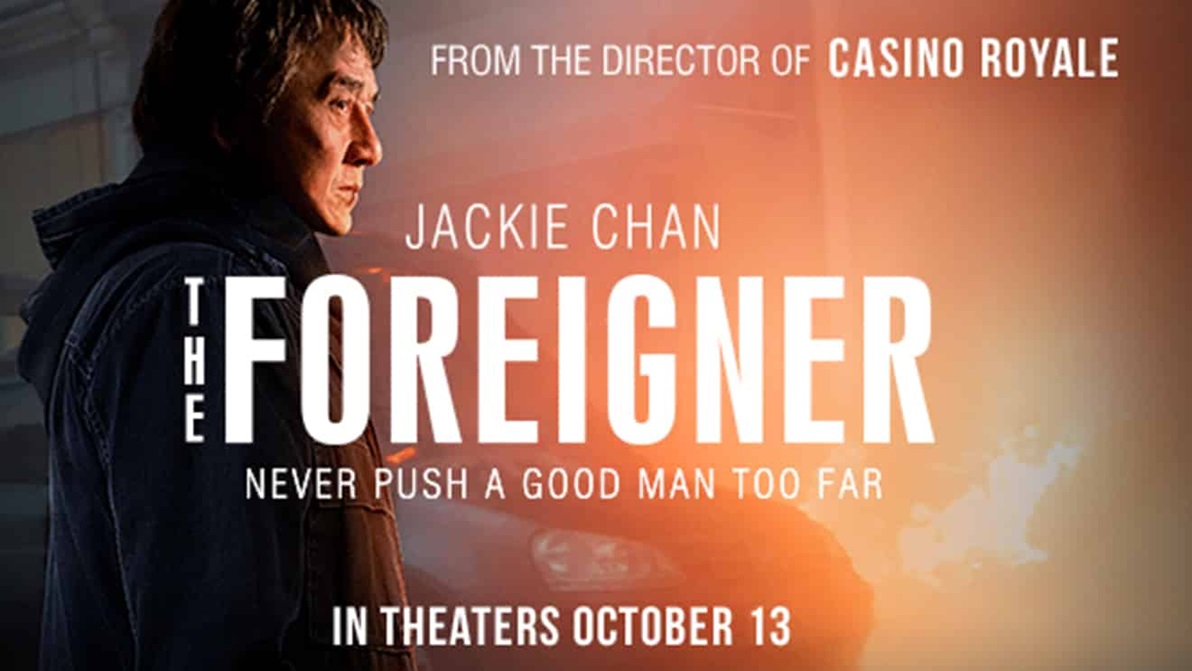 FINALLY!  I’ve been waiting to see this movie for MONTHS considering how bad ass that first trailer was!  Jackie Chan in a gritty action film where he’s blowing stuff up and shooting people in the face!?  It’s like those Liam Neeson films only with an actor who ACTUALLY know how to fight instead of just being really good at pretending they can!  Now I’ve seen my fair share of Jackie Chan films, but the dude is so prolific outside the US (he’s a freaking POP STAR SINGER in China!) that no matter how many films they sneak onto Netflix, there’s always gonna be a lot more that flew under the radar.  That’s why I’m so glad to see him headlining a big mainstream (at least for the US) Hollywood film to remind people that he’s still the freaking man!  That’s not even getting into the solid team behind this which includes both James Bond actor Pierce Brosnan and James Bond director Martin Campbell; both of whom may not have the BEST track record but can certainly produce some solid work when the need arises!  Can this dark thriller starring the most delightful man in existence live up to the huge expectations set for it, or are we doomed to be disappointed once again like we were with Green Lantern, Mamma Mia, and Rush Hour 3?  Let’s find out!!

The movie begins with the typical overprotective dad Ngoc Minh Quan (Jackie Chan) picking up his teenage daughter from school (Katie Leung) when BOOM!!  She gets caught in a terrorist bombing from a group known as the Authentic IRA who shaking things up in the UK; especially for Liam Hennessy (Pierce Brosnan) who’s now an elected official but was a member of IRA Classic.  With little else to turn to, Quan starts to zero in on Hennessy as the one person who might have a clue as to who are behind the bombing that killed his daughter, and he’s also the target of the English government who are hell bent on stopping whatever this group has in store next.  Can Quan get the justice he seeks for the death of his daughter?  Does Liam Hennessy actually know more than he’s letting on about the recent bombings?  Seriously, why wasn’t THIS guy in those taken movies!?

This movie would be interesting to dissect if it wasn’t so… average.  It’s got some decent performances and looks… fine, but there’s not much in here that was holding my interest outside of Jackie Chan doing Jackie Chan stuff and Pierce Brosnan’s outrageous Irish accent.  I mean… it’s KIND of unique in the way Jackie Chan’s character works into the plot and I certainly know little enough about the IRA for the premise to feel somewhat novel (seriously, the only thing I know about the eighties are movies and shitty one hit wonder bands) but it’s far from the strongest work that anyone involved with this has done and it ends up feeling kinda pointless.  I love seeing Jackie Chan in a mainstream movie again and I get that even HE can’t pull off the kind of badass stuff he did back in his Drunken Master days, but even he can only do so much to grab my attention during endless scenes of people talking about stuff, threatening to do stuff, and reminiscing about the old days.  Jackie Chan really would be an amazing fit for a Taken style action thriller, but sadly this isn’t that film no matter how much the trailers are telling you otherwise.

Not to toot my own horn, but I’m usually VERY good at nit picking and pointing out flaws in movies; even for ones I REALLY like.  This one though?  Yeah, I’m drawing a blank here and can’t come up with anything more cohesive than IT’S SLOW AND BORING to convey my disappointment with the film.  There’s just no URGENCY to anything as the mad bombers barely show up in this damn thing and aren’t interesting in the least when they do bother to make an appearance.  We don’t know their motivation, their personalities, how they got started, or even their NAMES for the majority of this film.  They’re just… there.  Plot devices to the bigger storyline which is… what?  Piece Brosnan feeling emasculated for NOT being a shit headed IRA terrorist anymore?  He’s certainly good in the role even WITH the accent, but I just couldn’t bring myself to care for his plight, the investigation, or even the dead people who were killed in the two bombings here; the latter of which by the way has zero impact as we don’t know anyone who was killed nor does the movie spare a second to deal with the fallout outside of how it PERSONALLY affects Pierce Brosnan.  Maybe if they did a time hopping there were we see him dealing with the current day crisis while flashing back to his time in the IRA, THEN there might have been some weight to his past coming back to bite him in the ass.  As it stands, we’re watching a dude we don’t really care about get his comeuppance for stuff we never got to see for reasons that seem REALLY half baked.  Can you FEEL the excitement!?

The only thing of note in this film is Jackie Chan who at least feels ACTIVE in this movie even though he contributes absolutely nothing to the plot.  Yeah, he basically has nothing to do with the Pierce Brosnan storyline or even the bombing investigation, and it’s probably the only thing I found interesting about the film.  In other movies where a dude is going for revenge or is roped into a situation they never wanted a part of, they end up being a key of sorts to some greater agenda or at least have an impact on other characters within it.  That’s really not the case here as his single minded quest to find answers and seek revenge runs completely tangent to everything else going on, which… kind of makes sense.  He’s has no interest in bringing the bombers to justice; nor is he even doing much investigating himself.  He’s just fucking with Pierce Brosnan (not doing much more than being an extremely costly inconvenience) until he gives him the names that he needs and is frankly barking up the wrong tree for the most part.  It goes against what you’d normally expect from this kind of character (or even the character sold to us in the marketing) which makes this movie kind of ingeniously subversive in a very small way.  Even when it gets down to the final confrontation (most of which is spoiled in the trailers), it really is completely meaningless for him to have done that as everything would have ended up pretty much the exact same way if he let the authorities do its job.  It reminds me of Jarhead and the big scene at the end of that where our main characters, having waited for months to actually DO something, finally have an opportunity to make a difference by taking a shot, but it’s denied to them because the military decided to use an airstrike instead.  It doesn’t matter if there’s a greater purpose in these characters’ actions (whether the actions denied to the soldiers in Jarhead or to the ones taken by Jackie Chan in this film) because the motivation behind it is so very personal and it comes across extremely well here whenever he’s on screen and basically just working through his grief in a completely unnecessary spy adventure.

Other than Jackie Chan’s interestingly structured story line (which is only about a third of the film) and some decent moments from Pierce Brosnan, there’s not much else I can recommend even if it’s all just… fine.  It looks good which is the least you should expect from a movie with THIS director behind it, and the action scenes are choreographed extremely well.  It’s not a kung-fu free for all with those cartoonish whooshing sound effects (as awesome as those are), but it does have enough flair and death defying feats from the master himself to keep things interesting even when the story itself isn’t all that engaging.  It’s really not worth seeing in the theaters and I wouldn’t even say that it’s worth seeing when it gets to Netflix considering you could it has WAY better Jackie Chan movies on it already.  Say what you will about Skiptrace; it at least knew how to keep things interesting!  Sure, by being EXTREMELY goofy and random, but I’ll take that over boring and stuffy any day!