We’re back with another episode of Dragon Ball Z-2: Electric Boogaloo!  While the first episode didn’t quite get the ball rolling as much as it should have, there’s still a HUGE amount of potential for where this series can go.  Do they pick up the pace with episode two, or is it gonna take a bit longer for this series to find its groove?  Let’s find out!!

The episode begins with a recap of Beerus’s horrible destruction in the last episode (he may have only destroyed half of a planet but that doesn’t bode well for the OTHER half!) and Goku going off to visit King Kai now that he’s free from his familial responsibilities.  That doesn’t matter though because it’s VACATION TIME MOTHER FUCKERS!!  The Briefs family, which consists of Bulma, Vegeta, and Trunks, are heading out to a tropical resort to spend some quality time together and to hopefully get Vegeta to drop his scowl for maybe five seconds.  Too bad they couldn’t convince him to wear his pink shirt, though he probably had that destroyed several years ago.

Well despite his usual harsh exterior, Bulma and Trunks are still happy to get even this much out of him as he usually just brushes them off to do some more training.  Gee, I wonder who THAT reminds me of.  Bulma even points this out to him and asks him directly why he’s gone to even this much effort.  He says that he’s just keeping a promise to Trunks.  What he fails to mention though is that this promise was after he CAVES THE POOR KID’S FACE IN!!  Remember THAT from Dragon Ball Z!? 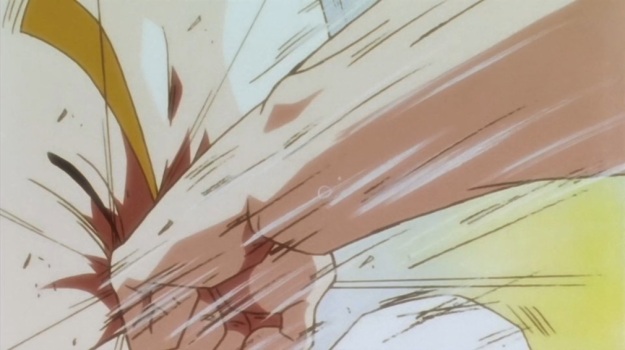 Yeah, so this is him finally taking the kid to the amusement park… though I guess they changed it from Disney Land to Aruba.  Either way, Trunks and Bulma seem to be having a good time and Vegeta hasn’t run off yet so he’s scoring plenty of brownie points with the both of them.

Honestly?  This is EXACTLY the kind of thing I wanted to see from the new series.  Dragon Ball Z was ALL about the running storyline, so there really weren’t that many chances for some down time with these characters.  Maybe that’s why I was such a big fan of season seven which was just about Gohan going to school and hanging out with Videl.  We already like all these characters and we’ve seen them save the world a dozen times already, so why not see what they’re actually fighting for?  Saving the world isn’t just about beating the strongest person, so it’s nice to sometimes be reminded of what these victories actually mean; whether it’s about the big picture of the entire planet getting to go on for another day, or about enjoying the simple pleasures of a day out on the town.  Speaking of simple pleasures…

The three of them (even Bulma is keeping up surprising well) proceed to pay this restaurant’s mortgage in a single meal which is the only thing that’s made Vegeta not act like a scowling man child all day, but it only lasts for so long before he finds SOMETHING to piss him off (apparently the giant fried squid they got wasn’t drained of its ink before gutting the nasty bits out) so Bulma and Trunks have to drag him away before he causes a scene.  His mood seems to improve somewhat (in that he’s merely scowling again instead plotting his vengeance against all squids), but of course he can’t go too long without finding something to knock the chip off his shoulder.  In this case it turns out to be… Danny Sexbang!? 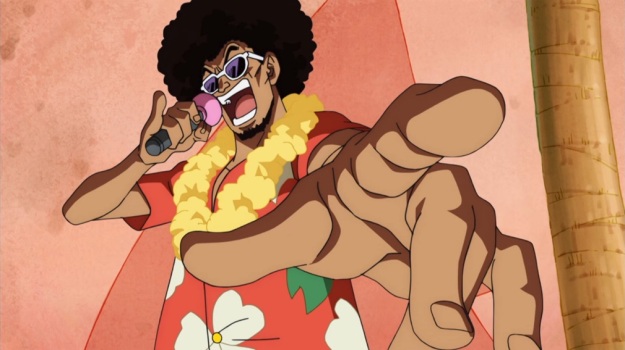 “How are all my lovelies doing today!?  YOU READY TO DANCE!?  You put your hands in the air, and you jump off the ground!  And then you take that funky butt and you shake it all around!!”

The three of them are at a luau of some sort, though it looks more like a mosh pit, and the lead singer of NSP over here decided to pick Vegeta out of the crowd because he isn’t smiling.  Dude.  This was a bad idea when they did it to Tommy Lee Jones, and it’s a WAY worse on now!  The crowd starts insisting he get on stage for dance off (chanting it over and over again) despite his clear desire to be left alone and he ultimately explodes in the crowd.  Not enough to kill anyone (just sends them flying back a bit) but enough to make the whole situation very awkward.  At this point he’s had more than enough family fun and just bolts back to home; leaving his wife and son behind.  Eh, they’re used to it by now and are just glad that he managed to last THIS long before finding the presence of mere humans intolerable.  Congratulations, Vegeta!  Like a real man, you managed to meet the bare minimum of expectations you cultivated due to years of neglect and child abuse!

“I sure hope he doesn’t take his bad mood out on me when we’re training later!”

Sadly enough, that’s the end of our fun time with the Briefs family as the rest of the episode is dedicated to jerk wad Beerus who just keeps racking up the asshole points for no reason.  We certainly didn’t need to see him annihilating planets in the Battle of Gods movie to prove how strong he is, and expanding upon that here feels like time we could more effectively be using to catch us up on all the characters.  Instead, we watch Whis and Beerus take turns belittling some species on a planet that never did them wrong and then eventually blowing it the fuck up.  The only thing of note here is that Beerus is having dreams of some mysterious figure (spoiler alert: It’s Goku) and he’s hoping this premonition can provide a decent challenge for him.  Honestly, I just don’t care anymore.  Beerus was already someone I didn’t particularly hold in high regard when he was in the movies, but the way they’re expanding him here is taking away any goodwill I might have had for the character.  Now you could argue that the setup here is no different from Vegeta when we were first introduced to him.  In fact, there was an entire episode devoted to him and Nappa destroying a planet right after freeing it from an oppressive rule which shows a level of vindictiveness that Beerus doesn’t seem to have; rather he’s barely even cognizant of those around him.  Fair enough, and we ARE only two episodes in this, but what ended up redeeming Vegeta is that he  was HUMBLED over the course of the series.  He was always shown just how wrong he was whenever his stubborn pride got in the way, and I just don’t see that happening for someone as OP as Beerus is.  There’s not much left to the episode after that.  We cut back to Earth where Vegeta is training in the gravity room once again (getting his ass kicked by the way) and promises once again to prove himself to be the equal of Kakarot and anyone else in the universe who dares to challenge his rightful place as the baddest Mo Fo who ever lived!

I liked this episode MUCH better than the last one, but we’re still about fifty-fifty in terms of quality per episode.  It seems there’s a conscious effort to ground these characters again and to make the stories a bit more personal and small to differentiate itself from the over the top bombast that Dragon Ball Z eventually became, and this is something I noticed with Resurrection F where THE SUPER SUPER SAIYAN GOD could still be fatally wounded through conventional means.  Well… SORT OF conventional means, but you get my point!  Now I honestly have no idea if that’s something they’ll be able to maintain going forward (we ARE waiting around for the God of Destruction to finally locate Goku), but so far it’s been working pretty well.  The first episode was a bit rocky with the Goten and Trunks subplot not really accomplishing much, but the Vegeta story line here was fantastic and I hope to see more like it going forward.  Seriously, what’s Yamcha up to nowadays?