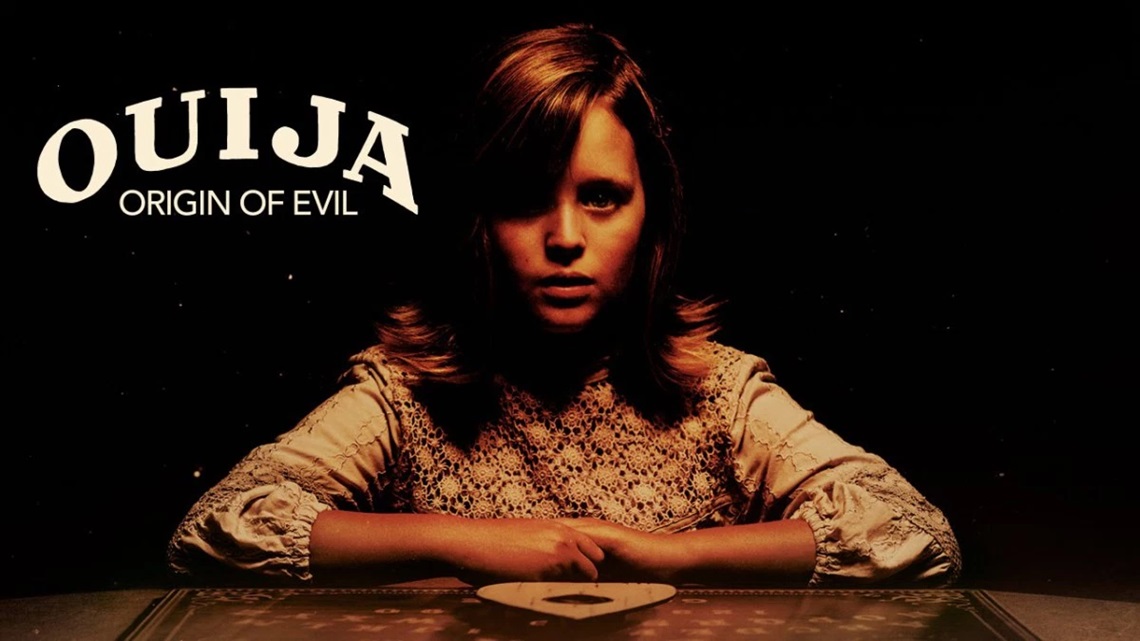 Ouija: Origin of Evil and all the images you see in this review are owned by Universal Pictures

In a year that’s already been pretty good for horror movies and sequels, has it been just as good for horror movie sequels?  Well ironically enough for a genre known for churning out sequels, there’s really only been two I’ve seen this year; The Purge: Election Year which is one of the best films of the year so far, and Blair Witch which is one of my least favorites.  Sure I heard people liked The Conjuring 2, but I hated the first one with a fiery passion so I highly doubt it would end up on the good end, and then if you wanted you could count 10 Cloverfield Lane as a horror movie which I would put on the good side even if it’s sequel status is somewhat questionable.  My point is that the data on horror sequels this year is, shall we say… inconclusive.  Will we have a more definitive answer one way or the other with this prequel (I know that’s technically not the same thing as a sequel, but I’m freaking counting it!) to a movie that was universally panned just two years ago?  Let’s find out!!

The movie takes place in 1967 at the home of the Zander family, made up the mother Alice (Elizabeth Reaser) and her two daughters Lina (Annallise Basso) and Doris (Lulu Wilson).  Alice is barely getting by after the death of her husband as her fortune telling business isn’t quite paying the bills, but they’ll make due for now and they even get a new item for the show that should definitely drum up some business, right?  Well those concerns become secondary as it JUST SO HAPPENS to be a ghost living in the house already that has started to take control over young Doris and is clearly after something but we’re not sure what.  For now, it’s just using Doris to pretend to be the dead father and freaks everyone out with the Ouija Board as a way to… I don’t know; keep Alice from calling the Ghostbusters?  Either way, Alice is more than happy to have a REAL (and presumably benevolent) ghost in the house to not be used to keep a roof over their heads but to also get some closure with her “husband” after his tragic death.  Of course, Lina smells bullshit from a mile away and knows better than to trust something possessing her sister CLAIMING to be her dead father, so she starts to investigate and even gets a local priest involved (Henry Thomas) to find out exactly what’s going on; something the ghost isn’t too happy about.  Will Lina and the Padre stop this madness before it’s too late?  Just what is the ghost after if it needs to pretend to be good rather than just kill everyone in their sleep?  How the hell is it gonna convince everybody of that when it keeps messing with her face!?

This movie gets it.  Where so many other ghost and possession movies take it for granted that the audience will go along with whatever happens, this one wants to earn its scares and to set up actual stake with the characters rather than have them serve as walking talking effigies to the audience’s desire to see blood splatters.  Sure, the movie wears its influences on its sleeve (*cough* The Exorcist *cough*) and it can sometimes feel a bit too kitschy in that regard, but the effort in making this more in line with a seventies horror film is at least a better idea than a Ouija Board movie deserves, and it ends up finding what made those work in the first place.

And then the third act happens.  Sadly enough, this is another movie like Don’t BreatheDon’t Breathe that feels the need to replace intrigue and suspense with clichés and uninspired shock value which undercuts what was done so well leading up to the climax.  It’s a disappointment considering how much potential this film had to be as standout in a year that’s already had so many good horror movies, but it just couldn’t stick the landing.

The clear influence here is The Exorcist, so much so that they have an homage to the iconic poster in the movie, but what I was probably most reminded of is The Last Exorcism; something that’s not too hard to figure out if you’ve seen the trailers, but it’s more than just how the main characters in both are snake oil salesmen (and also not just the fact that both are possession films with weak endings).  For me, the best way you can do a possession movie is to really hone in on the psychological elements rather than bloodshed and ghostly telekinetic attacks.  In both films, we have a main character, Cotton Marcus in The Last Exorcism and Alice Zander as the mom in this one, who want to believe that what they’re doing is right even if it’s all for show (Cotton Marcus has basically given up by the start of the film but this is something he’s been struggling with his whole life) and they run something that upends everything they thought about the world.  In this one, Alice embraces it which is a really cool twist on the formula and the ghost is doing everything in its power to keep Alice happy and easily manipulated, even going so far as to use basic cold reading techniques which was AWESOME.  What I love so much about this is that it shows clear motivation on the part of the ghost possessing Doris which feels sorely lacking in so many of these kind of movies.  We always ask when watching stuff like Paranormal Activity what the hell the ghost is waiting and why they don’t kill everyone already.  THEY ANSWER THAT HERE!  We see what the ghost can do and yet it’s obvious that it has to do things it doesn’t want to do (don’t piss Alice off too much) which implies a deeper agenda than just murder, and solving the mystery of what it’s after gives the audience something to hold onto and keep them engaged rather than just anticipating the next scare.

On top of that, it’s genuinely well put together, both in the way it’s filmed and the way the story plays out.  You buy everyone’s motivations even when they’re acting stupid, and there really aren’t any unlikable characters that exist just to get axed at some point.  Okay, there’s ONE person who’s kinda non-descript for that purposes, but in most other horror movies they would have intentionally made them annoying so I’ll give them credit for that.  Hell, even the GHOSTS are sympathetic once you find out what their deal is, which always makes for a better villain than THEY’RE JUST EVIL or IT WAS SATAN THE WHOLE TIME.  Aside from the outstanding character stuff, the film is very well shot and intentionally uses an overly grainy film look to try and emulate the feel of a film shot in the seventies, and while I can sometimes get annoyed with that, it’s not as overt as say Grindhouse and it does give a distinct look from every other HD horror film.  Effects work is solid with some weak CGI here and there, but the scares are well shot which compensates for any weaknesses there and the pacing keeps you tense without getting burned out on jump scare overload (good use of the tension release cycle, especially when you’re not even sure of the ghost’s intentions).  All of this makes it one of the better horror films of the year… for the first two thirds.

So this is where everything falls apart.  The scares are less interesting and go into overdrive, the motivations for pretty much every character are completely lost (including the ghost), and the ending itself did nothing for me and is hugely disappointing for a movie that was this smart and well-crafted up until that point.  The main problem is the ghost itself which gets a REALLY good backstory, but in the explanation it kind of over complicates things.  I’ll try not to spoil it, but there’s a discussion about how the ghosts seem to know certain things, and they come up with two answers; a good one, and then a stupid one.  The stupid explanation only needs to exist so that ONE SCENE makes a tiny bit more sense and it easily could have been cut out to make things simpler.  Not only that, but once all the cards are on the table we still don’t know what the ghost is after.  This is fine for the first two thirds because we were building up to that, but they have to give us something at some point and they just don’t which calls into question why they weren’t… shall we say MORE PROACTIVE, in the earlier parts of the movie if this is all they need to do to accomplish… whatever goal they were after.

Not only that, but MORE ghosts start coming in for some reason and I think they’re supposed to be helpful even though they’re anything but, and the movie just gets dumber and dumber from there.  The Ouija Board for example was handled pretty well in my opinion as merely a conduit through which the ghost was manipulating everyone, but then the movie starts treating it as something significant despite the fact that I’m still not sure what the hell it’s supposed to add to anything once the ghosts stops fucking around.  Now the ending and the final moments are probably more of a personal gripe as I’m not a fan of this kind of ending, but I do want to point something out.  The ending seems to only exist so that it can tie back into the first film (I’m assuming that’s what the post credits sequence implies) and while I never saw that movie, I’m pretty sure there was a diehard fan base urging the studio to tie everything into a single continuity.  I can accept an ending like this if they filmmakers felt that was the best way to finish the story, but if it was JUST for this reason, then I’m less inclined to be forgiving about it.  Oh, and I still don’t know what the final shot is supposed to mean, but then again, I guess we’re no longer watching a GOOD horror movie by that point and it can do whatever clichéd bullshit it wants.

This is still probably one of the best years on record for horror movies, but there are a fair share of disappoints with this and Don’t Breathe leaving me rather cold at the end.  That said, this movie (as well as Don’t Breathe) are so good for most of their running time that it’s still better than a lot of horror films we got in previous years and is still absolutely worth seeing.  Maybe even at the theaters if you like seeing a scary movie during this time of the year, and who knows?  Maybe I’m the only one who hates the climax here.  It’s so much better than what you’d expect from a modern day horror sequel (*cough* Last Exorcism 2 *cough*) but it could have been just a little bit more.