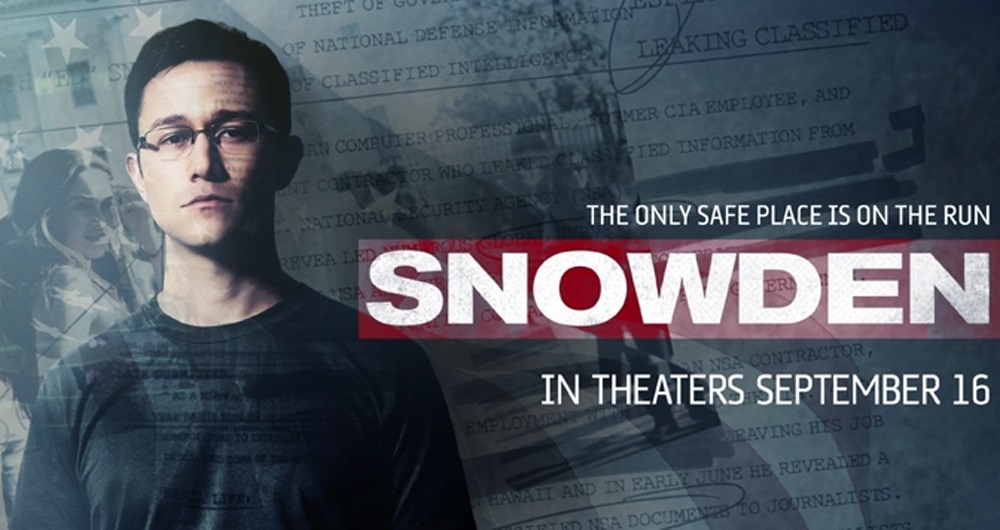 So first we got the Sully movie, and now THIS!?  What’s other movies are we gonna get about things that just freaking happened?  Has someone already polished off a treatment for the Charles Ramsey story!?  Well at least as far as these recent OF THE MOMENT BIOPICS go, this one has some relevance outside of the one event it’s focused on; namely the current state of US (and global) surveillance programs.  Does this manage to be an interesting and nuanced take on how all this information came to light, or is it a thinly veiled propaganda piece that no one bothered to make into a compelling film?  Let’s find out!!

The movie follows the career of Edward Snowden (Joseph-Gordon Levitt).  Some guy you MIGHT have heard about a few years ago.  Spoiler Alert!  He stole documents from the NSA and revealed to the public the existence of certain programs they were using such as PRISM and XKeyscore.  That’s towards the end of the story though.  Where we start is with him being discharged from the army (broke both his legs) and instead choosing to serve his country by applying to the CIA and doing computer stuff for them.  He barely manages to get the job and ends up soaring above his peers, going from job to job and always being at the best wherever he was (or at least that’s how the movie tells it).  Unfortunately, he finds out the US security agencies are doing a bunch of shady shit, and he’s not only having to deal with the guilt of spying on US citizens in an unconstitutional manner, he’s also having to keep this secret from his girlfriend Lindsay Mills (Shailene Woodley).  Will his sense of obligation to his fellow man be too strong for him to keep his head down!?  Well we all know the answer to that, but how’s it gonna play out when ACADEMY AWARD WINNING DIRECTOR OLIVER STONE shows it to us!?

Whether or not you agree with Edward Snowden and whether or not agree with Oliver Stone’s opinions of the NSA and the government, there’s an interesting story to be told here and I think Oliver Stone did a decent job directing it.  It’s far from his best work and it drags in places, but the acting is fantastic and they manage to put a relatable personal story in here that works well with the overtly political themes.  Take away the political leanings and whether or not you agree with them, and you do have a good movie about someone who is destroying himself from stress yet can’t tear himself away from the cause of it.  Not that’s not to say that you CAN (or should) ignore the politics in play here or question how accurate this is to the real life story (this IS an Oliver Stone film), but the movie’s stroke of genius was giving us something more than that in watching this man (who as far as I know is a complete fabrication or a dead on representation) struggling with his own internal demons and determining what’s right or wrong.  History will decide if this movie is more akin to Downfall than Spotlight, but those are still two really good movies!

Well okay, that comparison doesn’t QUITE hold up because it’s not like Downfall’s depiction of Hitler was flattering even if it was trying to be evenhanded (spoiler alert: he’s still a shit bag) which is something you can’t really say about Oliver Stone’s depiction of Edward Snowden.  If anything, it’s less Downfall than it is Springtime For Hitler (at least in the way Franz Liebkind intended it to be).  No joke, the dude is hacker Captain America here.  It’s as if Steve Rogers didn’t get the Super Solider serum and instead went into programming considering how much the filmmakers are in love with the guy.  That works when the person you’re making a movie about is a fictional representation of the bets aspects of America and the human spirit, but it’s a bit tacky to have such a simplistic depiction of a real life figure in a supposed true story.  I’m not informed enough about Snowden, the exact details of his actions, and especially how he’s conducted himself since then, but I still fall on the side of him having done something very important and should be protected as a whistle blower rather than having to face charges of treason, and while it kinda sucks that of ALL the places he ended up in it was Russia (not really his fault, but he has stuck up for the country on some of its shitty behavior) I don’t even hold it against him that he ran instead of facing trial.  You could say that Socrates was a hero who wouldn’t be as well remembered today if he fled instead of staying to drink hemlock, but I personally don’t see throwing yourself to the whims of an entity that wishes to destroy you as all that great of an idea, and while I am a proud citizen of the US, just looking at what’s happening to Chelsea Manning is more than enough evidence I need that Snowden shouldn’t be branded a “coward” for not subjecting himself to inhuman torture in our already broken prison system.  Still, you can argue certain points about HOW he chose to disclose the information that he did (he gave all the information to a newspaper owned in a foreign nation without personally ensuring that the information is relevant) yet the movie has zero interest in even giving THAT small amount of nuance to his actions or show the smallest bit of negative consequences outside of his own martyrdom.

So the movie is more of a platform for political grandstanding that it is a biopic which hurt the BASED ON A TRUE STORY aspect for me and therefore undercut the real world themes and messages.  Taken on its own merits and goals though, how well does it accomplish this as a movie?  It’s nothing special honestly, and for the most part it could have been directed by anybody.  That might be a good thing considering the flack that Oliver Stone has been getting lately (the last movie of his I saw was W), so maybe a toned down approach was the right movie, but his stylistic hallmarks (i.e. bat shit insanity and over the top montages) are very sparse in this.  There’s a big one at about the halfway point where Snowden explains to one of the journalist why he felt compelled to reveal this which feels like the big THIS IS THE POINT OF THE MOVIE moment, but other than that it’s a competently shot feature.  What doesn’t work as well here is the pacing which is sometimes a given when doing a biopic, but that doesn’t mean it’s worth overlooking.  Like in the real life story (presumably), Snowden worked for the NSA, the CIA, and then the NSA again as a contractor for Dell (both in Tokyo and Hawaii).  Now where things start to feel like a movie is HOW he leaves each of his jobs; namely he gets to a point where he can’t take the anxiety and the guilt and has to quit so he can find himself.  I doubt this is true, but even if it is, it doesn’t make a lot of sense for him to VISCERALLY despise the organization he’s working for… and then go right back to working for them later.  Oh, he thought things would change under Obama.  Well they didn’t, yet he still stuck around for at least five years into his presidency!  It feels like there’s something missing that would explain why he took such a principled stance at least twice before yet still went back to work for them; though admitting that he possibly LIKED the kind of work he was doing or that the spying aspect was in some way appealing would go against the film’s goal of portraying him as a modern day saint and the NSA as super villains.

Despite the less than well-crafted character arc in this, there are definitely moments where his story works.  The idea of watching someone who knows what he’s expected to do and can even understand the logic of it all having to live with the guilt of his actions day in and day out is certainly relatable to anyone who’s ever had to work a job they didn’t like or had to deal with angry customers over something.  No matter how much training and reassurances you get, these kind of issues can just wear on a person if they feel strongly enough about it, Jo Go Levy Levs does a fantastic job of portraying someone on the brink of collapse while pretending to hold it all together.  Not only that, but Shailene Woodley as Lindsay Mills brings out the humanity in Snowden as he probably would have had an easier time burying all this guilt if there wasn’t someone who was directly affected by the way these secrets have changed him.  All of this is really effective… the first time.  Like I said, the arc here feels weird considering that he quits for the same reason like three times in here, but even with that I can at least understand why he felt as if he needed to stay there for as long as he did even if his reasons for stopping never really evolved.

If Oliver Stone movies get your panties in a twist, then I’m sure you’ll find plenty to get enraged about here, but for someone who just likes watching movies, its decent enough.  The bias it has towards its subject matter is obnoxious when it’s ALSO trying to portray itself as a true story and the weird ways they dramatize the events here makes the movie feel longer than it should, but aside from all that there’s still a very human story to be told her and it’s told rather well.  It’s probably not worth seeing a theaters and I wouldn’t recommend something THIS one sided to be a replacement for ACTUAL research on the subject to form your opinion, but it’s worth a seeing at some point mostly due to the solid performances from our leads.  And if anyone from the NSA is reading this review, can you AT LEAST leave a comment?  Feedback is VERY important!