Welcome back to another episode of Rasho-Pony!  So far, season 6 has been a somewhat more successful version of the underwhelming fifth season.  While last season promised change and exploration but failed to deliver on it, this season feels a bit more assured of itself and has tried some new ideas here and there to keep things fresh.  Does that work for this episode where it’s essentially one big flashback to piece together the story up to now, or will this be a gimmick that wears out its welcome all too quickly?  Let’s find out!!

The episode begins with five of the Mane6 frantically racing towards Rarity’s house in the hopes of stopping her from reading a review of the opening night at her Manehattan Boutique.  The reason why is not clear yet, but it has something to do with information that they apparently divulged to the fashion critic which is presumably NEGATIVE information based on how they’re rushing to stop her from reading it.  Unfortunately they are too late as Rarity has the newspaper in hand and is merely waiting for her friends to arrive so she can read it with them.  For the sake of conflict, she refuses to listen to anything they say and proceeds to read it out loud; the others deciding to start hiding behind heavy objects while she does so. 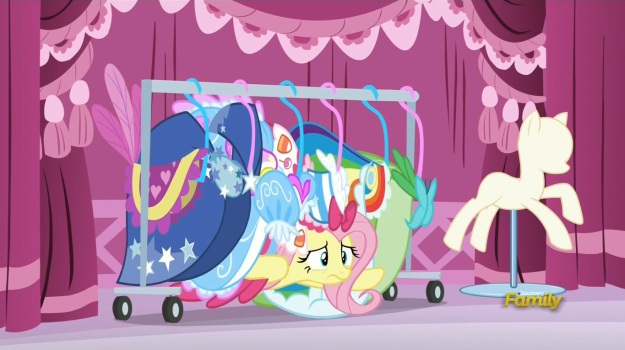 As Rarity starts reading the review, we start to flash back to the interview the reporter had with Rarity and her friends.  Speaking of which, I don’t know who designed this pony (or if the design is supposed to be ironic) but I get the feeling that fashion writers don’t tend to look like J Jonah Jameson and wear a wrinkled ties. 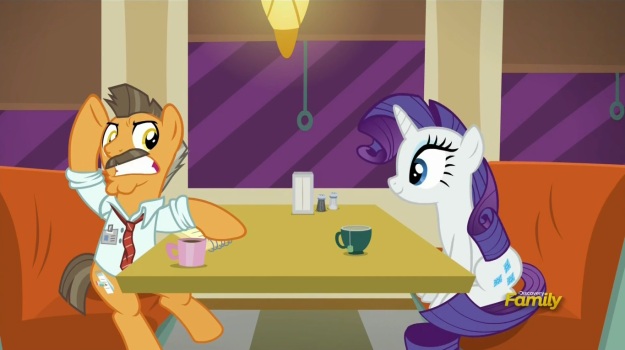 As the interview continues (still not seeing a review part to all of this), we find out from each of the Mane6 that the grand opening did not go very well as we now start flash back (A FLASH BACK WITHIN A FLASH BACK) to the morning before the opening where Rarity and her friends are trying to class the joint up before they open for business.  I wouldn’t think that Rarity would leave a job this big to the last minute (the place hasn’t even been CLEANED yet), but maybe this was the first chance she got considering she has two other locations to run as well.  During the Spring Cleaning, Rarity’s landlord Mr. Stripes comes by with his daughter to see how the place is turning out.  Not only that, but this gives us a chance to make our second Spider-Man reference as these two remind me of the Ditkovichs from the Sam Raimi movies!  The guy has an ulterior motive for visiting the shop as he wants Rarity to give his daughter Plaid Stripes a job under threat of a rent increase.  Now obviously Rarity can go to the police about this as blackmail and retaliatory rent increase is illegal (I’m also guessing she’d be smart enough to sign a lease which means he CAN’T raise the rent during that period of time), but she doesn’t do that and just kind of shuffles Plaid Stripes to the back so as to get her out of the way. 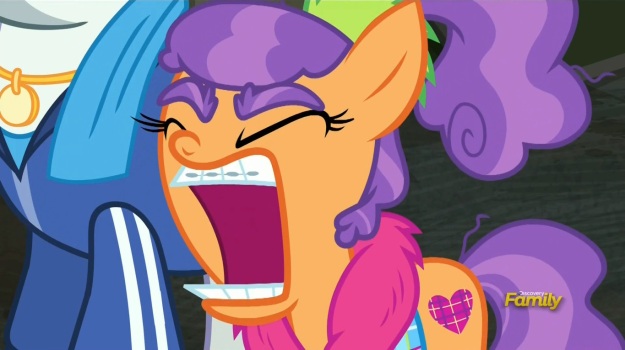 “She can eat through tin cans like nopony’s business!  That’s a VERY marketable skill!”     “It… sure is…” 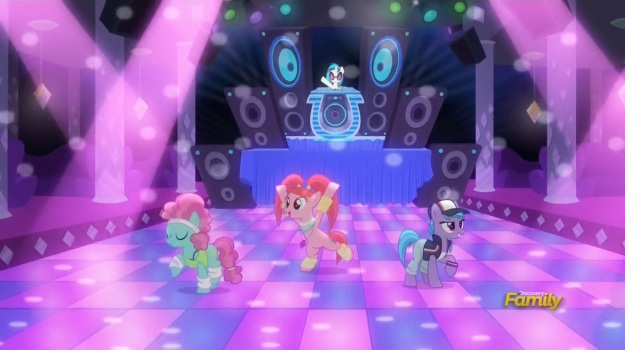 “Never gonna give you up!  Never gonna let you down!  Never gonna run around and desert you!”     “I love this song!!”     “They better play the Pokémon theme next!”

She didn’t check out the pony who owned the place she’s renting, she didn’t bother to see what was above her, and she didn’t even have animal control take a pass at it before the night of the grand opening!  Now that I think about it, she probably didn’t even THINK to get a lease on the place and is actually renting her new store location on a month to month basis!  While the whole episode feels a bit contrived so as to build tension (EVERYTHING GOES WRONG AT ONCE!), they manage to salvage it by cutting back to the interviews periodically to get a running commentary from everyone who was there.  Sure, it’s not in any way an original idea, but it helps to re-contextualize the events so that the humor doesn’t come entirely from the shenanigans but is split between that and the play by play happening after the fact. 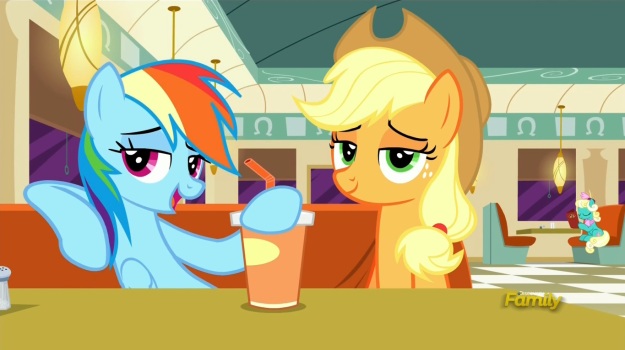 With all of this on top of Coco Pommel being too sick to work that day (aw… I like Coco) and the dresses arriving in an unorganized heap, Rarity is about to lose it and is just itching to pull out her fainting couch.  The rest of the Mane6 know that the day is about to go pear shaped if things don’t turn around REAL quick, so the five of them send her off to do a single task why they handle everything else.  Now at first, everything seems to go right as they try to do what Rarity wants them to do.  Applejack is frank with Plaid Stripes about her ideas for the shop, Fluttershy tells the raccoons they have to move out (they aren’t paying rent, the freeloaders!) and Twilight Sparkle is organizing the dresses which is right up her alley.  Simple enough, and is perfect for their skill sets.  On the other hand, Pinkie Pie tries to stop the party upstairs which is something she’s not TOO thrilled about, but after discussing it with her hallucinations, she gets up the nerve to try to shut down the night club (which for some reason is open in the middle of the day).

“Destroy the non-believers!  They must be punished!”     “Whoa!  Take it down a notch there.  How about we start small like finding a way to cut the power?”     “Your all a bunch of wimps”

The other odd one out is Rainbow Dash who’s trying to hire a new sales representative to cover for Coco, but I have to give it to her that she actually comes up with a great idea here.  Again, trying to think of what Rarity would want, she tests them on their ability to recognize fabric instead of something like how fast they can run a mile or how many Wonderbolts they can name. 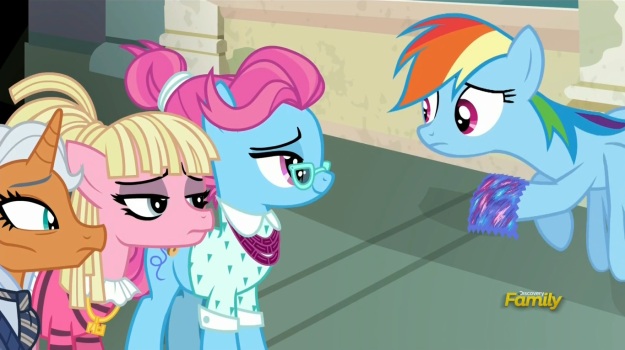 For some reason though, this turns out to be the wrong way to handle things.  Applejack is getting yelled at by Mr. Stripes for daring not to agree with his daughter, the raccoons are now rampaging like complete jerks, Pinkie couldn’t stop the party, Rainbow Dash… apparently isn’t happy enough with the test she gave, and Twilight SOMEHOW managed to fuck up organizing.  ORGANIZING!!  How did she even DO that!?   So what’s the solution?  Do things THEIR way instead of how Rarity would want them to do it because she trusts them to do the right thing.  First of all, I don’t think this is a great moral to impart as it seems to imply that assigned tasks are simply suggestions at best and should be done YOUR WAY instead of how it needs to be done.  Second, they don’t even really capitalize on that and the OUR WAY solutions aren’t all that distinct from their original solutions.  Applejack wanted to get Plaid Stripes to stop coming up with suggestions about a situation she has no experience or training in (running a fashion business) and told her that her latest idea of clothing made out of spoons would not fly in the high end fashion district.  This is apparently the wrong way as it led to Plaid Stripes tattling and Mr. Stripes getting pissed, so Applejack lets her do her own thing and she wears a spoon outfit to the grand opening.  Would Rarity have though the spoon outfit was a good idea?  No.  Was capitulating to Plaid Stripes exactly what she had been doing up until this point?  Yes!  HOW IS THIS NOT THE RARITY SOLUTION THEN!? 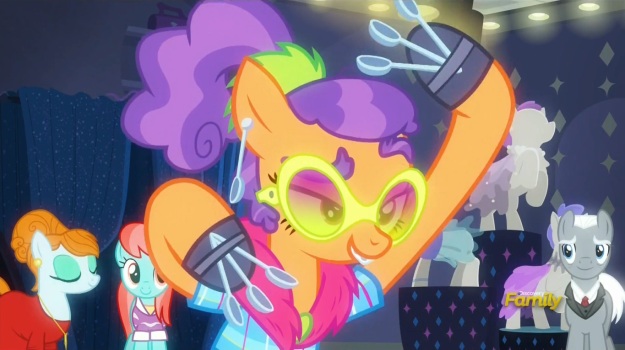 Fluttershy was told to take care of the Raccoons who were running amuck in the store, and so the Rarity Solution was to tell them to leave.  They start to throw a hissy fit like entitled bums and so Fluttershy lets them stay in the back room while working as wait staff that night.  This one just kind of confuses me as it’s an odd middle ground between treating them as equals and treating them as wild animals.  Also, I can’t see a scenario where Fluttershy promises them free housing in Rarity’s designer boutique will go over well with her once the grand opening is over.  Twilight’s and Rainbow Dash’s are the most baffling though as Twilight didn’t seem to HAVE a problem and just couldn’t decide on the best way to organize, while Rainbow Dash gave up on giving them competency tests, then TRIED to have them run a mile for the job, and eventually just hired all three of them.  The Rarity Solutions in these cases don’t seem like bad solutions as they just needed a bit more time to get their stuff together.  So what’s the moral of the story again? 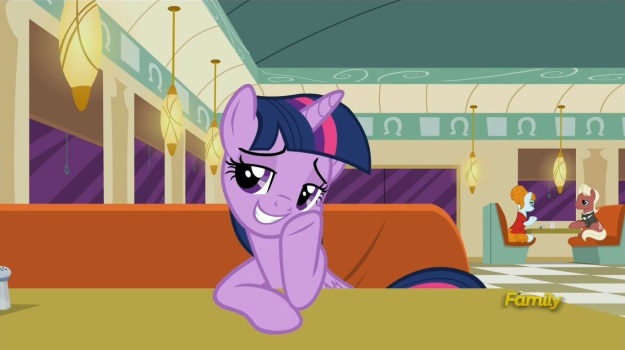 “How many ways can YOU organize a fall fashion line in under two hours?”

The one that makes complete sense though is Pinkie Pie’s who’s story I assume the moral was originally based on and then retrofitted to work with the others.  From the outset, Pinkie was not happy with the role she was given which was to shut down the party, so she ended up doing a poor job of it.  Once she realizes that she needs to come up with her own way of solving it, she actually does something great which is to hire DJ-PON3 to come down to the shop to DJ the grand opening; thereby still doing something for Rarity while improving upon what was originally asked of her.  The rest of the micro-subplots may have fallen flat, but this one definitely gets across what they were going for. 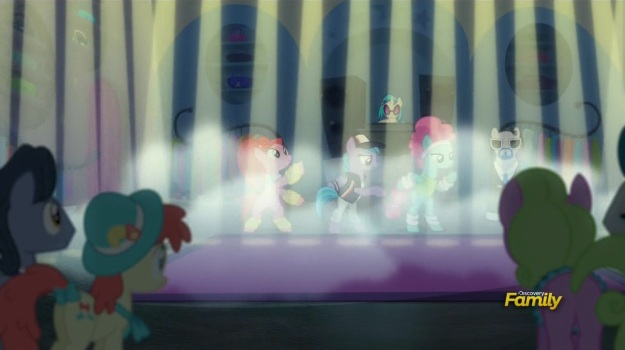 So everything seems to have gone off without a hitch!  Rarity’s shop gets plenty of business on its opening night and it even gets a rave review in the paper!  So what exactly were the Mane6 worried about that they wanted her to NOT read the review!?  Well I guess the fact that it took TWO tries to get it right once she left it in their hands was an embarrassment or something and they didn’t want her to find out about it from what the reporter had written.  Okay…  Well Rarity forgives them for their mistakes I guess, and the episode ends with everyone super happy and hugging it out, at least until the NEXT time Rarity asks them to do something and she either works them to the bone or they come up with really stupid ideas like galoshes on formal wear.

The episode had some flaws that are pretty common to the series (not very strong moral at the end, shenanigans out the wazoo), but the new elements added for this episode made it rise above those issue and make it one of the more unique outings we’ve gotten in a while.  The format change alone where it’s a semi-documentary style (a la The Office) brought a lot of life and energy to this episode, and I even liked Plaid Stripes a lot even though she was a brat to everyone.  So far, Rarity has had the best episodes this season and frankly had the best episodes of last season.  This may not be as good as something like Rarity Investigates, but it’s one of the better episodes this season because it took a chance and tried something different.  Hopefully they can keep coming up with fresh ideas going forward so as not to fall into predicable routines that dampened a lot of the enthusiasm for season five.