My Little Pony: The Movie and all the images you see in this trailer talk are owned by Lionsgate and Hasbro

Despite being such a popular series with a fan base that is heavily invested in the creative side of the process as much as it is in the show itself, there really hasn’t been much said about the My Little Pony movie that’s been in production.  Heck, it honestly feels like Equestria Girls, which was a spin off that only got a limited theatrical release, had MUCH more fanfare and anticipation surrounding it than something Hasbro is actually risking quite a bit of money on.  Okay, there’s no way we’re talking Transformers money here, but there’s no way a feature length animated feature with celebrity voices THIS famous was less than what they invested in freaking Jem and the Holograms which had its first trailer out five months before its release compared to four months for this film.  Still, an uneven marketing campaign doesn’t always spell doom for a film (*cough* Wonder Woman *cough*), and even if it’s a sign that the studio doesn’t have faith in the final product… well go ask Newmarket Films how that worked out with Donnie Darko.  Either way, let’s find out!!

Okay, so there’s no getting around it.  The movie looks PRETTY terrible based on this trailer.  The first thing you’ll notice is that the art style is quite different from the series which isn’t ALWAYS a bad thing (watching it for the first time, I was somewhat reminded of the changes made for the Spongebob Squarepants movie), but it doesn’t come off as an IMPROVEMENT and there are clearly areas where they were cutting corners; most notably with the copious use of CG for the buildings and backgrounds. 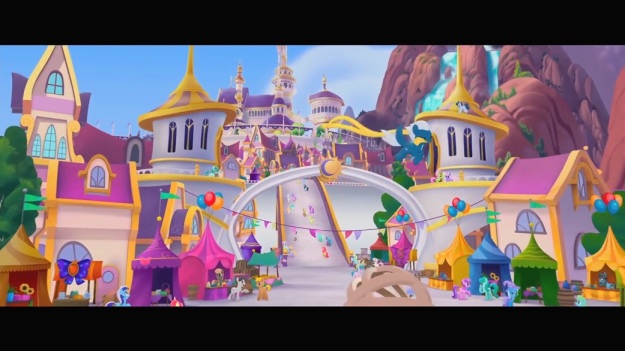 WHERE THE HELL ARE ALL THE TEXTURES!?  Did they just forget to render them!?

END_OF_DOCUMENT_TOKEN_TO_BE_REPLACED

We’re back with another episode of Next Top Equestria Model, and if that title didn’t make it clear enough we’ll be focusing on Rarity and her love of fashion once again!  Now Rarity is easily my favorite of the Mane 6 as her episodes tend to have a lot more range than anyone else’s and she’s a genuinely interesting character to watch with highlight such as Sisterhooves Social,  Sweet and Elite and of course the eponymous Rarity Investigates!  Will this be another great example of why Rarity is the best, or is this one we’ll want to bury away with other better off forgotten episodes like The Mysterious Mare Do Well or even Just for Sidekicks?  Let’s find out!!

The episode begins with Rarity and Spike handing out flyers for a fashion contest that the former will be hosting at the Carousel Boutique in an effort to give aspiring young fashion designers an avenue to express themselves as well as an invaluable networking opportunity!  With any good fashion contest though, you need a collection of colorful and sardonic judges to make it all come together and fortunately Rarity has such a group of characters in mind!  Hoity Toity will serve as our Tim Gunn, Photo Finish will be the wacky and unpredictable one that’ll generate the drama, and the anchor will be… Applejack!  Wait, WHAT!? 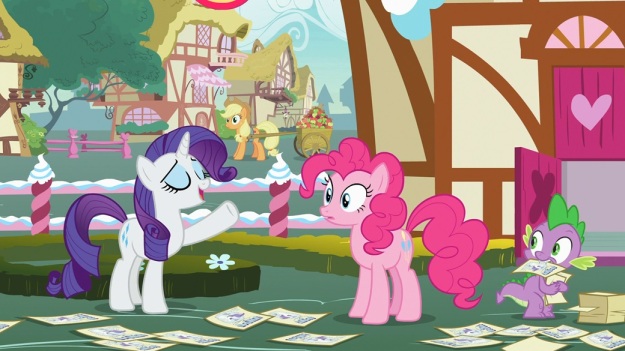 Good thing she was passing by just as you made that announcement!

END_OF_DOCUMENT_TOKEN_TO_BE_REPLACED

We’re back with another episode of Unbreakable Fluttershy who hasn’t had a starring role since last season’s Viva Las Pegasus and has barely even shown up since this season began.  Fluttershy isn’t the easiest character to write for considering how much her defining characteristics can sometimes limit what she’s capable of doing, but in recent seasons they’ve managed to put out a few gems with her that complement what makes her unique in the cast.  Can they continue that going into season 7, or will this be remembered as a half-hearted piece of season filler?  Let’s find out!!

The episode begins with Angel Bunny (Fluttershy’s own Reverend Richard Wayne Gary Wayne) doing some parkour in Fluttershy’s house (okay…) before it all ends the same way every parkour run inevitably does so; with the runner getting GREVIOUSLY (and hilariously) injured.  Oh I’m sure he’s fine!  He’ll be back to being an abusive jerk-wad in no time! 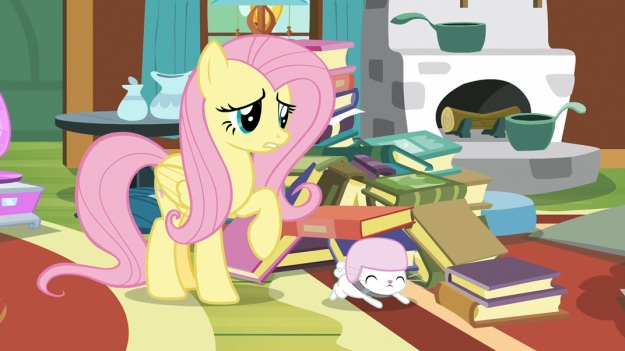 END_OF_DOCUMENT_TOKEN_TO_BE_REPLACED

We’re back with another episode of I Love Trixie, starring MLP’s very own Lucy/Ethel besties Starlight Glimmer and THE GREAT AND POWERFUL TRIXIE!!  It’s no secret that I am a huge fan of any episode that puts these two together, and the fact that they are the subject of the season premiere’s second episode is certainly a good way to get me to overlook the fact that we’re starting the season off without a big two-parter to shake things up and start things off with a bang.  Does this turn out to be yet another wonderful use of the two best characters the series has going for it right now, or has this particular team up managed to run its course already?  Let’s find out!!

The episode begins with Trixie and Starlight in the kitchen of Twilight’s Doom Fortress where the former is getting some remedial lessons on magic.  I don’t know why she needs magic when she’s already a master of MAGIC!, but I guess THE GREAT AND POWERFUL TRIXIE will not be outdone in ANY field of study.  At the very least, she’s still the master of adorable frustration which she proves to us once again after the fifth attempt to turn a pepper shaker into a teacup fails.

“You put an anti-magic spell on this, didn’t you.  Yes Trixie.  I took the time to come up with a spell to nullify all magic and placed on a random object you JUST SO HAPPENED to try and turn into a teacup.  I absolutely did that.”     “AH HA!!  THE GREAT AND POWERFUL TRIXIE IS TRULY THE MASTER OF DEDUCTION AS WELL!!”

END_OF_DOCUMENT_TOKEN_TO_BE_REPLACED

We’re back with another episode of My Little Pony: Friendship is Magic and it feels like an ETERTINTY since I last said that!  Then again, the show has taken MUCH longer to start a new season in the past, particularly between seasons four and five when they were being switched over from The Hub to Discovery Family, but that doesn’t mean it was any easier to go without my weekly fix of Pony Magic!  Now the new season is actually doing something very different right off the bat as the show USUALLY starts off with a two-parter to open the season with yet decided to forgo that for the first time since the series began to instead have to separate episodes to start us off with.  Does a less bombastic opening salvo for the season still manage to bring the excitement needed to bring the fans back on board, or does this first episode drop the ball right off the bat?  Let’s find out!!

The episode picks up not too long after the events of the season 6 finale where everyone is getting ready for the award ceremony to honor Starlight Glimmer, Trixie, Thorax, and Discord, for their brave efforts to thwart Queen Chrysalis’s latest scheme.  They didn’t CAPTURE her so she’s still out there probably scheming something else, but her power has at least been diminished since all the Changelings turned on her and became beautiful florescent colored bug horses for their troubles and installed Thorax as their new king.  Probably less to do with his role in overthrowing the monarch than the fact that he now has BAD ASS ANTLERS!

END_OF_DOCUMENT_TOKEN_TO_BE_REPLACED

Equestria Girls: Legend of Everfree and all the images you see in this recap are owned by Hasbro

Well what do we have here?  It looks like another Spin-Offs Are Magic movie has been graciously provided by Hasbro who’s always looking to find new ways to milk it’s biggest cash cow that isn’t being helmed by Michael Bay!  Now what’s interesting about this Equestria Girls movie though is that we’ve finally established Human Twilight as an entity in this world and is now a part of our parallel universe crew which, coincidentally (or not so coincidentally) now has seven members  at about the same time as Pony Twilight got a new member for her team!  It also means that this franchise doesn’t have tie itself to the school to accommodate Pony Twilight who still needs to enter in and out of this dimension through the statue portal thingy which gives this a chance to stand on its own as an independent world rather than an extension of Equestria.  Does this series manage to throw off the shackles of its spin-off roots in spectacular fashion, or will removing the training wheels only lead to pain and an uncertain future for these characters?  Let’s find out!!

The movie begins with Human Twilight who is tossing and turning in her sleep from some sort of nightmare, and while we don’t get a glimpse of what she’s dreaming about, we DO at least get a glimpse of her room which has some interesting details all on its own.

I’m guessing Spike was the one who insisted a picture of him be framed and hung on the wall.

END_OF_DOCUMENT_TOKEN_TO_BE_REPLACED

We’re back with another episode of You Don’t Know Applejack!  For the first time in a while, it looks like we’re gonna get a flashback episode to the halcyon days of yore for at least one of our regulars, and maybe get some insight into how they became the pony they are now!  Will this trip down memory lane be a breath of fresh air as we get to see characters at a different point in their lives, or will we get more of the same despite the chance to change things up a bit?  Let’s find out!!

The episode begins with The Apple Family providing Filthy Rich with his latest delivery of Zap Apple Jam to sell in his store.  I’m surprised that the CEO has to personally transport the goods himself, but maybe there’s something more to this transaction than what we’re seeing…

END_OF_DOCUMENT_TOKEN_TO_BE_REPLACED

The Reviewers Unite!
Blog at WordPress.com.