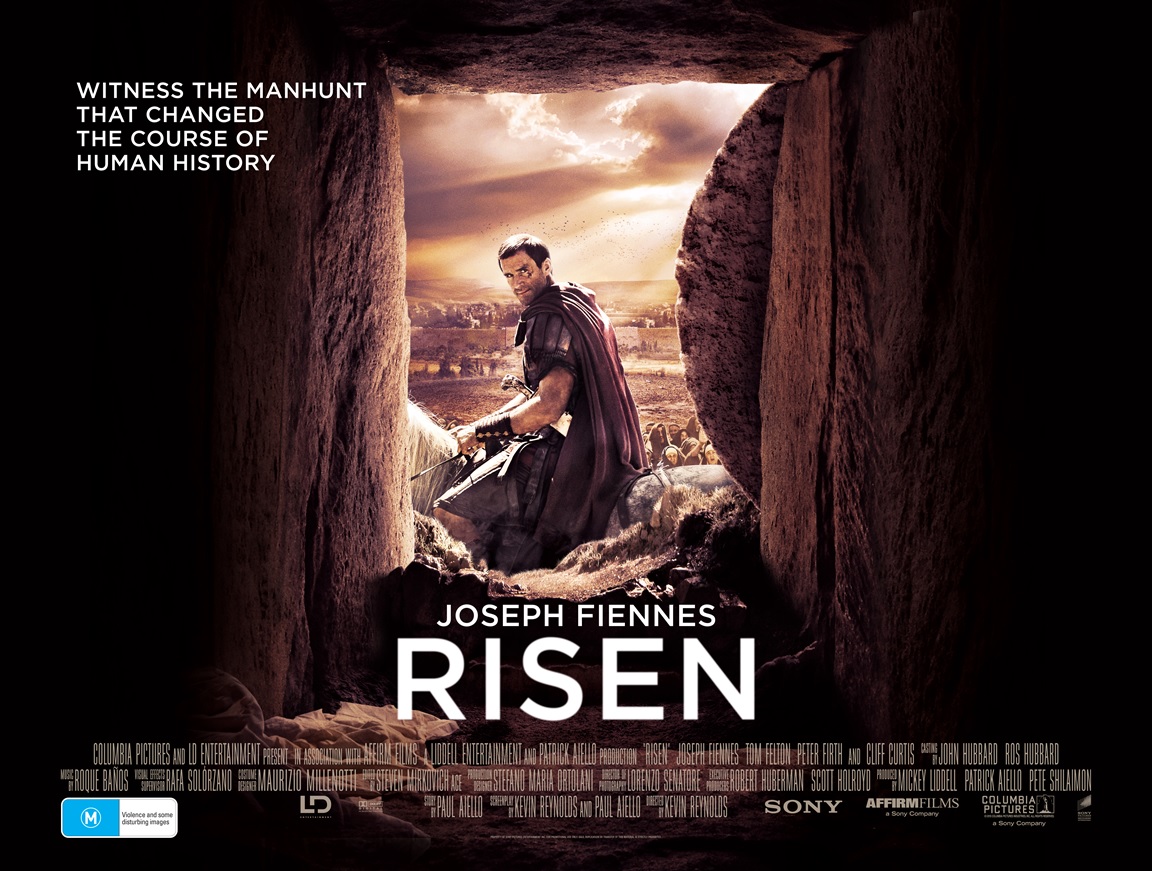 Not two months into the new year and we’re already getting a glimpse at the horrors we will have to endure this year as the endless wave of religious propaganda infects the cinemas like a virus (one of the really bad ones like Ebola).  Still, I always maintain that you can make a good movie out of any subject matter including religion with Noah still being the benchmark for modern biblical epics.  This one, while being a produced by the same company that brought us War Room, at least doesn’t have the foul brand of Pure Flix on it and it does have some decent stars here like Cliff Curtis who could lend at least SOME credibility here.  Does this manage to be one of the better bible films since they came back in style, or do these movies suck no matter who they get to waste their time in it?  Let’s find out!!

The movie follows a Roman Centurion named Clavius (Joseph Fiennes) who works for Pontius Pilate during his time Judaea and we follow his story on the day that Christ is crucified.  Essentially playing as Pontius’s right hand man, Clavius is sent to ensure that Jesus (only referred to in this movie as Yeshua and played by Cliff Curtis) does indeed die on the cross and to ensure that his remains are entombed.  However, the high ranking Jewish officials (Rabbis I guess?) are concerned that someone will steal his body as to complete the supposed prophecy that he will rise after three days.  If the body disappears, then it will cause unrest in the city as his believers will feel their faith in his is affirmed.  Sure enough, the two bumbling guards they post at the tomb (no seriously, they’re straight up cartoonish in this) fail in their duty and the tomb is found to be empty.  It’s up to Clavius to find that body to make sure that there is proof that he did not indeed rise from the dead and that this all the work of conspirators.  Of course, if you’ve read the book then you know that isn’t the case and Clavius has one hell of a surprise waiting for him!  Will he be able to find Yeshua’s corpse (alive or dead) before Pontius throws a hissy fit?  What will Clavius do if he discovers that a man really has been brought back to life?  Is it possible that we have a Faith Based movie that ISN’T completely awful!?

This movie isn’t good, but it’s also not Pureflix, Kirk Cameron, or even The Kendrick Brothers.  It’s… fine for what it is, but what it is is a TV movie that only got to the big screen because the J man is popular right now with a certain audience.  As an average movie goer who doesn’t consider giving their hard earned money to cheap movies a faith affirming action, it’s inoffensive and just kind of dull which still puts it ahead of such dreck as War Room or Saving Christmas.

Let’s try and stay positive here.  What about this movie works?  Well other than maybe the casting of Peter Firth as fat Pontius Pilate (Paunchy Pilate), there’s not much here that uses visual shorthand to show the non-believers as bad people like you’d see in Left Behind where the teenager daughter was going to hell for having piercings or bullshit like that.  In fact, it lacks that sense of propaganda you get in almost all of these modern religious films that only confirm how narrow their audience is and how narrow minded they are in their interpretation of their faith.  More than anything else, it plays out like a police procedural that eventually turns into a journey of self-discovery for the main character Clavius.  The cast as well is pretty damn impressive for this kind of movie with the aforementioned Peter Firth, Joseph Fiennes as Clavius, Tom Felton as Clavius’s assistant Lucius (the guy who played Malfoy in the Harry Potter movie) and mother fucking CLIFF CURTIS as Yeshua himself!  On top of that, the locations are decently scouted even though there’s not much to the set design, and the acting is… fine.  As a TV production this is fairly strong, but it’s missing a cinematic edge that would make this appropriate to watch in theaters instead of buying for fifteen bucks at Walmart, but it’s so much better than any other religious movie I’ve seen recently that WASN’T directed by Darren Aronofsky, that I’m inclined to be more than a little soft on this movie for simply not pissing me off.

That’s really about all I can say in the movie’s defense though.  While I wouldn’t say that anything in here is embarrassingly bad, the rest of the movie is painfully average and uninspired which is why despite this being the second best religious film I’ve seen since the boom began, it’s still not a good movie nor something I would ever willingly see twice.  There’s nothing interesting with the cinematography which should be a GIVEN considering what the movie is about, and the acting across the board is just good enough to pass without much heart or range.  Joseph Fiennes is going full Jason Momoa on this in that he acts entirely in glowers and knitted eyebrows which create a performance that is hardly compelling to watch.  No one else does much better either, though Cliff Curtis has the benefit of a decent interpretation of Jesus to work with so he comes across fairly decently here.  He’s not on screen too long and the script knows not to waste his presence when he is there, though the way he exists the picture is absolutely hilarious.

Supposedly this movie has a 20 million dollar budget, but it frankly looks to be a lot less.  Sure, the outfits look fine and the locations are nice, but the sets are bland and anything even close to a special effect or an action scene is bottom of the barrel cheap.  There’s an earthquake that causes cracks in city walls, but they look like they were added in Photoshop and the dust it kicks up looks more like fuzz on the camera lens instead of particulate matter.  The movie starts out with a 300 style fight scene, but God bless em’, they just don’t have the money, camerawork, or choreography to pull it off to the point that stones about as big as a soccer ball are enough to topple a Roman unit.  Seriously, the attack by the Jewish rebels is about as convincing as Captain America’s plastic shield in those Reb Brown movies.

There’s really no better way to describe it than dull.  The procedural elements don’t really amount to anything considering that there is no conspiracy for them to uncover or mystery to solve.  It really is that the dude walked out of the cave after being dead for a couple of days so having Clavius interview several townspeople doesn’t amount to anything when the answer is exactly what people are telling him it is.  When he DOES find Jesus (Nyuk-Nyuk-Nyuk) the movie manages to at least go in an interesting direction where it kind of turns into The Hobbit for about twenty minutes or so, but it’s not enough to save the rather anti-climactic police story we had to sit through for the previous hour.  I won’t get into too much detail, but there comes a point where Clavius finds himself traveling with the disciples to find Jesus again with the Roman army trying to hunt them down in the process.  It all comes off like that scene in the first Hobbit movie where they’re running away from goblins or something and are trying to reach Rivendell.  While I appreciate the effort, this is still a fairly cheap movie so it basically translates to crawling in the tall grass and fighting off one dude (namely Malfoy).

Once they DO find Jesus, it’s all rather pablum as they don’t really talk much and it’s mostly about basking in Cliff Curtis’s glory while he cooks fish and heals a dude who has leprosy.  Something we can do right now by the way, but not between edits like Jesus can.  Maybe this loving, Olan Mills, style portray of the man is enough for those who already believe in him, but it felt very artificial and safe when they could have gotten a bit more into him as a character instead of a literal God figure.

The trailers before this movie included White People Get Cured of Cancer (Miracles from Heaven) and Fuck Yo’ Laws; I’ve got Jesus (God’s Not Dead 2) which will probably make a HELL of a lot more money than this movie will simply for being unchallenging and proselytizing fluff pieces which is a shame because, next to Noah, this is the best example of having faith be an element in a film without it being propagandist or mean spirited to everyone else.  Even with its modest budget of twenty million, the movie’s already looking to be flop so I wouldn’t expect anyone else trying as hard as this movie did to stay as neutral to other faiths and level headed about Christianity as they did here.  It really isn’t a good movie simply because of how boring it is, but I’d much rather see something like this get popular and maybe usher in an era of ACTUAL biblical films rather than the fundamentalist Christian circle jerkers we’ve had to deal with recently.  If you’re someone who does want a legitimate faith based movie instead of propaganda… well then you’re probably better off rewatching Noah, but this can work as well if you want a bit of variety in your faith based collection.