When a movie comes out the same week as another possible Shyamalan disaster and another Christian film to add to the catalog of faith based cinema, it’s pretty easy to get lost in the shuffle.  Yet somehow, The Perfect Guy managed to not only bump the new releases out of the top spot but also overcame the smash hit of the season (Straight Outta Compton) and the flash in the pan garbage of the moment (War Room).  Is this movie a surprise gem in a very uneven post summer season, or will this turn out to be another inexplicable hit that everyone forgets about once it drops away in a week or two?  Let’s find out!!

The movie is about a highly successfully lobbyist named Leah (Sanaa Lathan) who’s got the perfect life with the perfect guy (though not the titular Perfect Guy) in the form of David (Morris Chestnut).  Despite outward appearance though, the couple are having difficulties behind the scenes because David just isn’t ready to get married and have kids while Leah getting more and more nervous about waiting until he’s ready which seems less and less likely to happen as the days go buy.  The couple end up splitting because of this and Leah is completely distraught and just throws herself in her work to try and forget the [breakup].  Will she ever find love again?  Well yes, because this one guy named Malcolm (Michael Ealy) swoops into her life and is just too good to be true!  I mean, anyone else wouldn’t have picked up on a whole lot of warning sign beforehand, but she’s just happy to have someone [be nice to her] and she goes along with it.  Bad call because once she does see the creeps true nature (he mercilessly beats the shit out of some guy for dubious reasons), she tries to end it and Malcom just isn’t hearing it.  Things continue to escalate as he begins stalking her and taking more and more drastic actions to get or attention which is throwing everything in her life into disarray.  Can the police and her own support network shield her from his attempts to sabotage her life?  Will she be forced to take matters into her own hands to stop this creep?  Isn’t this just a gender swapped version of that Idris Elba and Beyoncé movie!? 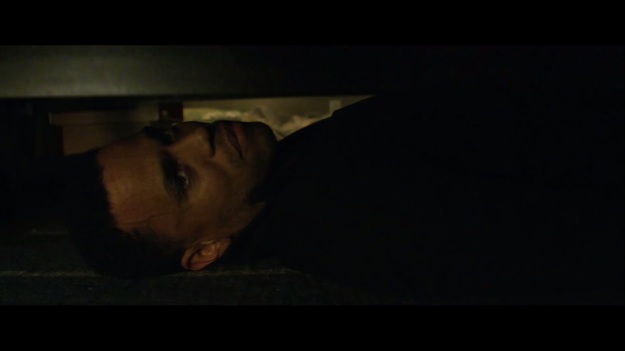 “Is it too late to be a villain on Dexter?”

So that sounds like the set up for a decent thriller, right?  Yeah… not really.  At best, this movie is at right about mediocre and is completely derivative of much better movies.  The first act in particular is just unbearable to sit through and not in a way that good thriller is supposed to be.  The dialogue is broad and overblown to the point that you can’t buy these actors as real people and it comes off as amateur hour at the Histrionic Academy.  The story beats here are purely functional and exist just to get us wherever we need to be without any consideration to how people would actually react in these situations, so we end up spending the first forty minutes as Carter creepily courts this woman wondering why she’s not picking up on anything and why her friends and family aren’t looking out for her, especially when they know she had just ended a very serious relationship.  Michael Early is TRYING to bring something here and I will give him credit for infusing some genuine menace into this nice guy persona, but he lays it on way too thick for it to be believable that absolutely no one raising an eyebrow to his behavior.  For example, her dad is apparently notorious for not liking his daughter’s boyfriend, but turns around on Malcolm immediately when during their first meeting he whips out two tickets for him and the father to see an MLB game.  Now you’d expect the father to be at least a LITTLE weary about the guy trying to curry favor with him, but since no one here reacts to Malcolm in a realistic way, he buys this guy’s bullshit hook line and sinker!  I get that the audience is going to be more aware because we get to see more of his interactions with Leah and her inner circle than any of the other characters, but this corny mother fucker goes so over the top with his nice guy shtick that it just is impossible to take seriously when everyone turns a blind eye to this guy. 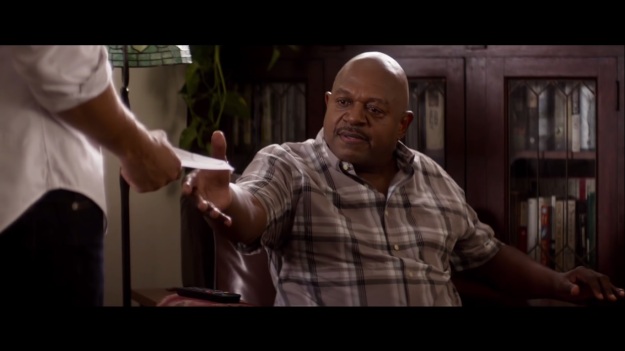 Fortunately, the movie does get better once Malcolm shows his true self and Leah realizes she needs to get the fuck away from him before she becomes the target of his next violent outburst.  Not only that, but everyone around her is keenly aware of the scumbag trying to destroy her life and support her to the best of their abilities.  For a movie that was so unrealistic in its depiction of human interaction, it’s odd and refreshing to see people act reasonably and positively.  Still, the movie doesn’t really get good at this point but instead just hovers around ho hum for the rest of the running time.  The only thing that consistently excels is Michael Ealy as the deranged Malcolm, but even his performance isn’t breaking any ground.  It’s a damn good version of a character we’ve seen many times before, but the movie doesn’t let him run wild with it and it feels a bit too restrained.  Everything else just feels alternately generic and dumbfounding.  The cops in particular are a riot in this with John Getz playing one of the biggest sad sack cops of all time.  He spends the first fifteen minutes of the second act not believing her (because of course the cops don’t believe someone is getting stalked) and the rest of the movie being the must bumbling and incompetent detective of all time.

“What the hell are you gonna do about this scumbag!?”     “I don’t know.  Do you have pepper spray anything?”

In fact, if there’s one thing that stood out in this movie, it was that pretty much everyone was incompetent to one degree or another.  One of the things that takes away from Malcolm’s menace is how incompetent he is at BEING a stalker in that he leaves evidence all over the fucking place (despite wearing latex gloves) and continues to make stupid choices (mostly involving taking things) that should have gotten his ass caught right away.  Of course he ISN’T because as I said, the cops are useless in this movie.  There are several scenes in this where the cops just overlook evidence that was clearly left behind and there’s no reasonable explanation on why they missed it.  I mean MAYBE they wanted to make this realistic, in that comps can be pretty unhelpful in these situations, but that’s usually takes the form of law enforcement not treating situations like this seriously enough to properly investigate.  In this movie, they are investigating THE SHIT out of this guy and Leah’s situation, yet they just keep missing things.  They have an ENTIRE CSI squad sweeping her house at one point, yet no one finds a god damn thing despite the fact that Malcolm was very carelessly sneaking through the place like half a dozen times.  Oh, and he’s a computer whiz so naturally no one can ever catch this guy streaming videos, setting up tracing devices to monitor her phone calls, or even breaking into her fucking e-mail account.  Nope!  He’s just TOO GOOD!!! 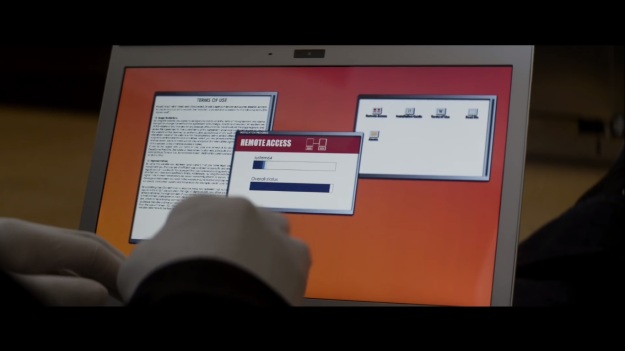 He’s hacking into the mainframe to upload a worm to the network adapter!!  At least I think that’s what he’s doing…

The incompetency of everyone around her makes you then wonder why Leah never thinks to purchase a security system.  This is never once addressed in the movie which makes it incredibly frustrating to watch this dumbass bumble his way through her house at random hours with absolutely nothing there to stop him.  Oh wait, I can tell you why; because it would end the movie at the forty-five minute mark.  I guess that’s the source of all the problems in the latter two thirds of the film.  The movie just feels sloppily written with very obvious mistakes that are conveniently covered up by characters not doing anything they should be doing.  Contrivance is the word of the day here, and this movie is chock full of it.  The third act ramps up the action I guess, but it’s not all that satisfying and the ending is pretty standard for the “CRAZY STALKER IS AFTER ME AND EVERYONE AROUND ME IS STUPID” genre of film. 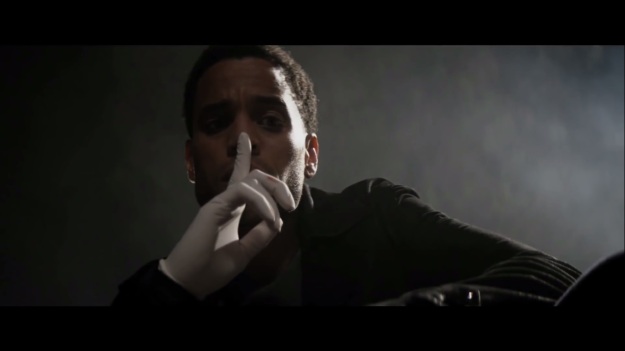 “Shh…  It’s important to keep quite right now.  If you call for help, I’d definitely get caught.”

I wouldn’t really recommend this film.  It’s not as bad as some of the dreck I’ve had to sit through this year, but it’s just so boilerplate that I could barely pay attention to it.  At least with something like Fantastic Four or Pixels, I can talk about its failings in interesting ways.  With this?  It’s just one big Meh.  If you’re looking for Meh, then by all means see it but I wouldn’t know why you’d be looking for that.  We’ve had some surprisingly decent movies hit theaters in the last two weeks, and I would recommend almost all of them over… wait, what the hell is this movie called again?