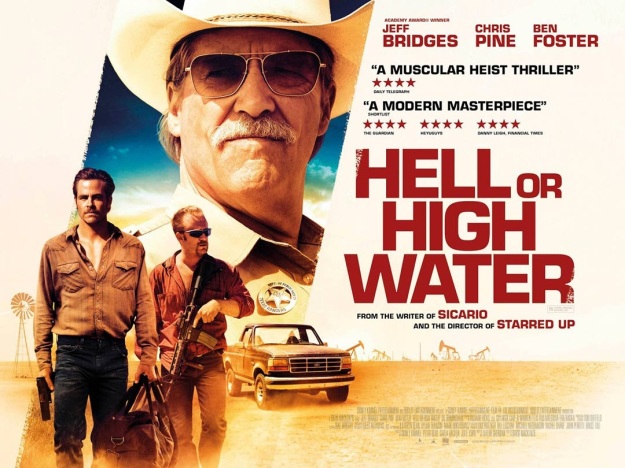 Can we say award season is in full swing now?  Have we run out of DC films to be disappointments after collecting half a bajillion dollars instead a full bajillion?  Sure, Doctor Strange is in November and we’ve got a few more animated kids films to suffer through, but the deluge of lightweight and over budgeted boom-a-palooza is over?  Well we can only hope, but what we should be hoping for even MORE is that the Oscar bait this year is up to snuff and not a bunch of studio films that cut the budget and let the actors look pensive for minutes on end set in World War 2.  At least with this movie, things seem to be off to a good start as this is a down and dirty Texas crime movie starring well known genre actors as well academy award winning ones!  Will this be one of the best films of the year (Oscar bait or otherwise), or is there just a bunch of hot air surrounding a mediocre actioner?  Let’s find out!!

The movie begins with two kinda dopey dudes robbing a small time bank in a small time town in East Texas.  They manage to get away clean, more so out of dumb luck than their own skill, but I guess that’s the advantage of robbing bum-fuck nowheres-ville.  The two end up hitting a few more places in a similar manner, also getting though it by the skin of their teeth, and this gets the attention of Texas Ranger Marcus Hamilton (Jeff Bridges) who’s on the verge of retirement but thinks he can nab these two before he finishes up his tenure.  He drags along his partner Alberto (Gil Birmingham) to check on those places that have been hit and see if they can predict where the two are gonna strike next, all the while running into reminds of how miserable these areas are due to the recent recession.  Our nominal heroes by the way, brothers Tanner and Toby Howard (Ben Foster and Chris Pine) are victims of said misery, but their exact motivations aren’t clear yet as to why they’re raising money and how much of it they need.  Will the cops stop the robbers before they can reach their goal?  What are Jeff Bridges chances of making it out of this alive considering he’s days from retirement?  Is it REALLY that hard to catch these dumb mother fuckers?

END_OF_DOCUMENT_TOKEN_TO_BE_REPLACED

January began with Oscar overflow from 2015, and it plans to end with… well not Oscar bait, but something MUCH classier looking than the usual January fare.  We’ve got Academy Award winner Natalie Portman producing this western about a woman making a stand against those who wish to destroy her.  Hell, take off the cowboy hats and replace the pistols with legal briefs and you basically have Erin Brockovich!  Still, if they expected this movie to be any good, they wouldn’t have released it in January.  Then again, we got The Boy in January, and that one turned out to be pretty great.  Could it be that we have ANOTHER January success story on our hands?  Let’s find out!!

The movie begins at a small house out in the country which is the homestead of Jane Hammond (Natalie Portman) and her young daughter.  Her husband Bill (Noah Emmerich) is arriving home after… doing cowboy things, but is in pretty bad shape as he had a run in with the Bishop Boys gang.  He managed to get away by the skin of his teeth, but the Bishops’ aren’t about to let him escape after what he and Jane had done to them in the past.  It won’t take them too long to find their house, and with Bill out of commission Jane must prepare for what happens next.  He drops off their daughter at a friend’s house before seeking out Dan Frost (Joel Edgerton) who was her fiancée at one point, but all that changed some time ago in a backstory that we are drip fed throughout the movie.  The sad bastard has been drinking himself to death since finding out that Jane had married someone else, but he eventually agrees to help her fend off the bad guys for some money, though it’s clearly an attempt by him to get back in her good graces.  Armed with a couple of guns, some dynamite, and a few tricks that Dan picked up in the Civil War, the two of them prepare for the attack by the Bishop Gang led by John Bishop himself (Ewan McGregor).  Not only that, but they finally have a chance to discuss what had happened between them all those years ago which could lead to some unexpected revelations for the both of them.  Oh, and Bill’s hanging around there somewhere in the back; slowly dying from his multiple gunshot wounds.  Will they be able to put aside their differences long enough to stay alive, or will this uneasy love triangle be the death of them long before the Bishops get there?  Will there be very reasonable explanations for Jane’s actions that Dan should have PROBABLY guessed about instead of sulking for the last few years?  Did anyone manage to sit through this entire movie without passing out from boredom? 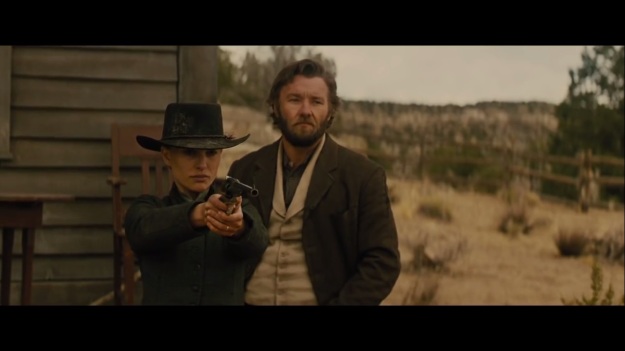 END_OF_DOCUMENT_TOKEN_TO_BE_REPLACED

Oh goody!  We’re getting another Quinten Tarantino film!  Who wants to bet that it’ll be a very well made throwback to films from his youth that will get half the critics to praise him unendingly and the other half to dismiss him as a stunted artist that’s gotten quite long in the tooth?  Personally, I tend to fall into the former category, but I can understand the latter’s frustration with the guy’s output recently.  I wouldn’t mind if he goes ahead and does something RADICALLY different from what he’s been doing so far but even if he sticks to the same old tricks, he’s still the undisputed champ of these kinds of films.  So with that said, what can we gleam from the first trailer of his latest magnum opus?  Let’s find out!!

The trailer begins with Samuel L Jackson sitting on a pile of bodies in the middle of a snowy road as Kurt Russel’s stagecoach approaches, and I guess he joins Kurt Russel for… some reason.  They’re both bounty hunters and Kurt Russell has his latest perp handcuffed to him in the form of Daisy Domergue (Jennifer Jason Leigh) who’s charged with murder and will hang once she’s delivered.  From there, the plot isn’t TOO hard to guess, but the trailer makes it kind of hard to understand what is going on.  I’m assuming the hateful eight will consist of Kurt Russell (playing John ‘The Hangman’ Ruth), Samuel L Jackson (playing Major Marquis Warren), and the remaining character actors who show up in the trailer, and they’ll all be waiting out a terrible blizzard in this one building.  However, Kurt Russell knows for sure that one of them is actually a traitor and is after something (most likely Daisy), so the film will be about praying on one’s paranoia with the characters constantly checking over their shoulders and looking for the rat in the midst.