Alright everyone!  Now that we’ve had our fun with the GOOD list, it’s time to put on some work pants as we start wading through the unimaginable dreck that was yet another “fun” aspect of the abysmal year that we all had to suffer through.  You know what though?  Most of us made it through to the other side, so if looking back at the year that couldn’t beat us and having a laugh (or one last bitter tirade) at the pathetic excuses for entertainment that made daily life just a little bit worse, well I think we all deserved it, don’t you?

Anyway, let’s not beat around the bush any longer!  WE’RE DIVING RIGHT IN!!

Since I didn’t even bother trying to watch another Adam Sandler movie this year, this dubious distinction goes to two OTHER Netflix features; albeit it for very different reasons.  The truth of the matter is, I didn’t particularly mind either of these films as I think they had some good ideas buried within their mediocre (and cheap looking) execution with Death Note having an interestingly different take on its main character (a whiny little punk with issues of inadequacy instead a megalomaniacal genius) and Bright having an ALRIGHT set up for what is essentially a weaker version of 16 Blocks.  That said… yeah, these films are REALLY flawed and in glaringly offensive ways.  As much as I like the idea of taking some of the pomp and circumstance out of Death Note and reframing Light Yagami to be a less foreboding figure, I don’t see why that necessitated him to be white since they never play with that change in his identity within the text of the film.  There could have been a component of White Privilege to the story (especially with L being black), but that seems to have never been the intent on the part of the filmmakers who simply seemed to associate AMERICAN REMAKE with WHITE AS DEFAULT.  Similarly, the half-baked and ham fisted social commentary in the script for Bright creates one of the most cringe inducing screenplays of the year which has Orcs standing in for Black People in a world that still has Black People, and it even finds an excuse to get Will Smith to say “Fairy Lives Don’t Matter” before beating said fairy to death.  Sure, the movie picks up once it gets away from its proudly ignorant views on race and becomes a straight up chase film with Will Smith and Joel Edgerton (who’s under a decent enough make up job), but that’s hardly enough to excuse everything that it gets wrong in the process.  Now I don’t want this to come across as Netflix bashing because they DO put out quite a bit of decent content as I’ve heard good things about First They Killed My Father, Beast of No Nation, even The Babysitter, and while it wasn’t my favorite King Adaptation this year I thought Gerald’s Game was pretty good too.  That said, they’ve had quite a few stumbles over the years, pretty much starting with their awful Adam Sandler deal, and these two movies are just further examples of their awkward steps towards becoming a media empire of their own; something they’ll need to keep working on now that Disney is gonna own everything else in the world and will eventually come out with their own streaming service to try and crush them.  If Netflix wants a chance to survive the Disney/Fox merger, they’ll need to avoid having clunkers like this clogging up their service.

END_OF_DOCUMENT_TOKEN_TO_BE_REPLACED 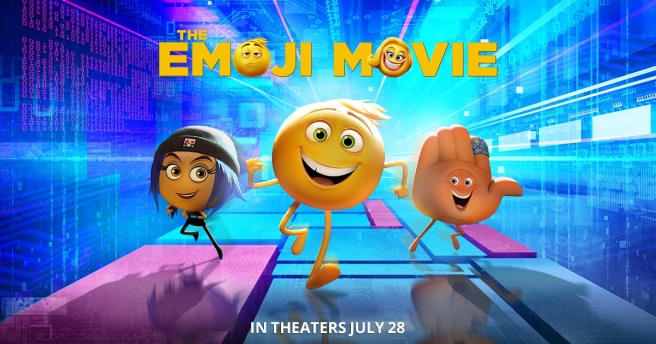 I’m not ready for this.  Seriously, why am I doing this!?  WHAT HAVE I EVER DONE TO DESERVE THIS PUNISHMENT!?  Actually, don’t answer that.  Okay… focus.  Deep Breathes.  Sigh…  So The LEGO Movie was a big hit and so was The LEGO Batman Movie which means the imitators and knock offs were sure to follow; culminating in THIS which I can only assume was the first idea that someone threw out at Sony and they just decided to run with it.  It’s got a pretty good cast, and I have liked Sony Animation films in the past, so maybe this has a shot!?  Yeah… probably not.  The best thing we can hope for is that it won’t be TOO painful…  So then!  Will this be a SLAM DUNK for the Oscars, or have we somehow managed to find a new low in cinema?  Let’s find out!!

The movie is all about the MAGICAL world of living apps that live inside all of our phones and in particular the messaging app that contains those ADORABLE and MARKETABLE Emojis we all love so very much!  One such Emoji is a Meh in training named Gene (TJ Miller) who’s ready to start his first day as an… OFFICIAL Emoji… I guess.  See, how it works is that these Emoji creatures wait around all day in vertical cubicles (basically a thirty by six Hollywood Squares setup) and are scanned whenever their MASTER USER wishes to use one of them.  Why they couldn’t just have their pictures taken and then scan THOSE when the user needs them is beyond me, but asking questions like that only breaks the immersion!  So anyway, Meh’s first day ends in utter disaster as he PANICS and makes the wrong face; leading to the user thinking the phone is malfunctioning and will therefore take it to be replaced.  Now all the Emojis are ready to hang him in the middle of the street because he’s bringing about Armageddon with the good ol’ Smiley Emoji named… wait for it… SMILER (Maya Rudolph) leading the charge!  He manages to escape with another Emoji named HI-5 (James Corden) who used to be one of the user’s favorites, but has fallen on hard times and needs to find a way to force himself back into their good graces and thinks that helping Gene find a way to… fix his bad Meh face I guess… will also lead to a solution to HIS problem.  The answer comes in the form of a hacker named Jailbreak (Anna Faris) who agrees to rewrite their code or whatever if they can help her get to THE CLOUD!  Okay then.  Will Gene find a way to be more meh, or is his less meh qualities really a gift instead of curse?  Will the three of them manage to save the phone and live for another few months before their owner switches out his current one for the latest model?  What sick and twisted God is responsible for giving such miserable creatures any degree of sentience AND WHY AM I SITTING THROUGH THIS NIGHTMARE!?

END_OF_DOCUMENT_TOKEN_TO_BE_REPLACED

Directed by Will Speck and Josh Gordon

Christmas themed comedies for the most part (at least the ones that aren’t made for TV) have a pretty solid track record with classics like Elf, Bad Santa, Home Alone, Christmas Vacation, and A Christmas movies among their prestigious ranks.  I would also include How the Grinch Stole Christmas (the Ron Howard one) and even Jingle All the Way among those, but I tend to be in the minority with that particular opinion so we’ll save those arguments for another time.  The point is that there’s a certain sense of… shall we say EFFORT that comes to be expected when trying to cash in on the holidays; even if the goal is to make it raunchy like they did with A Very Harold and Kumar Christmas (another classic) which seems to be the intent here as this movie seems to be a mix between Project X, The Hangover, and the first ten minutes of Die Hard before the terrorist took over the Nakatomi building.  Does this wild party live up to the standards of excellence we expect from Christmas films, or is this just a lazy cash in that just so happened to wrangle in a whole bunch of popular comedians to do a whole bunch of lazy material before collecting their Christmas bonuses?  Let’s find out!!

Our story begins at the Chicago branch of Zenotek which sells servers or something like that where we meet our key characters for the shenanigan fueled debauchery that will unfold in due time.  We’ve got Josh (Jason Bateman) who’s basically if Jason Bateman worked at a branch of a tech company, Clay (TJ Miller) who’s basically if TJ Miller was in charge of said branch of a tech company, Mary (Kate McKinnon) who is what you’d imagine Kate McKinnon would do as a caricature of the head of human resources at said branch of a tech company, and a bunch of others played by Sam Richardson, Vanessa Bayer, Karan Soni, Randall Park, and Rob Corddry to fill out this scenario where a branch of a tech company as filled entirely by smart asses and awkward comedians.  Oh, and Olivia Munn is in here too as the uber savvy hacker Tracey to be Josh’s love interest and to provide the very obvious Chekov’s Gun for the finale.  Anyway, while we’re getting introduced to all these employees at Zenotech and setting up the boring typical Christmas Party, The CEO of the company Carol (Jennifer Aniston) who also happens to be Clay’s sister has informed them that the branch is about to get some HEAVY cuts and that the party is cancelled.  Well that certainly sucks!  If only there was a way to fix both problems at the same time…  Oh wait!  There’s a big contract up for grabs and the company’s representative is in town (Courtney B Vance) so maybe they can woo him into signing a contract with the BEST CHRISTMAS PARTY EVAR, giving their employees the great time they deserve and saving the branch in the process.  It could work, right?