We’re once again invited to visit this new Star Trek universe, though it doesn’t quite have the same shine that it used to now that we saw the bafflingly mishandled Into Darkness, and even that really crappy video game that came out.  Remember that?  While we all may fondly remember the first reboot film in this series that kicked off this new universe, there’s no doubt that some damage has been done in the intervening years that it’s now up to this movie to start correcting.  Do they manage to steer the ship back on course, or should we all start heading for the lifeboats before this whole franchise crashes and burns?  Let’s find out!!

The movie follows the crew of the USS Enterprise who are in the middle of their five year mission to explore strange new worlds, seek out new life and civilizations, and to boldly go where no one has gone before.  Of course, for some reason there’s a Federation space station in the middle of this supposed unknown, but whatever.  They need to fuel up the tank every once in a while.  Anyway, during their pit stop at the space station Yorktown, Captain Kirk (Chris Pine) is getting ready to give up his command of the Enterprise… for some reason, but can’t do it just yet as a distress ship manages to make it to Yorktown with an alien who’s begging Starfleet to help them out.  Kirk agrees to get everyone back on board the Enterprise (probably pissing off a lot of the crew in the process) and heads to wherever this planet is which honestly doesn’t seem to be too far but there’s a giant nebula between Yorktown and this mystery planet so maybe it’s just that no one wanted to fly straight through that.  Kirk does however, but once they make it to just outside the planet’s orbit, a fleet of a bajillion tiny ships tears the enterprise to shreds and the bad guy of this movie simply known as Krall (Idris Elba) JUST SO HAPPENS to find that the Enterprise is carrying the ONE piece of a superweapon that he’s been searching for all this time that’s only on the ship due to a fluke peace mission from some point during their five year mission.  Luckily Kirk manages to hide it before the ship goes down in flames, but now the crew is completely separated and needs to find a way to get back together, defeat Krall, and get the hell off this planet.  Spock and Bones McCoy (Zachary Quinto) are together constantly kvetching at each other, Scotty (Simon Pegg) ends up meeting a local alien trying to get herself off the planet too named Jaylah (Sofia Boutella), Uhura and Sulu (Zoe Saldana and John Cho) are captured by the enemy along with most of the remaining crew, and Kirk and Chekov (Anton Yelchin) are left with the alien who initially sent them to this planet and are working together to find what remains of the enterprise.  Can these heroes set aside their differences and work together so they can survive this mission?  What is Krall planning to blow up with the super weapon once he finally gets the pieces together?  Most importantly, just how grumpy can Bones get!? 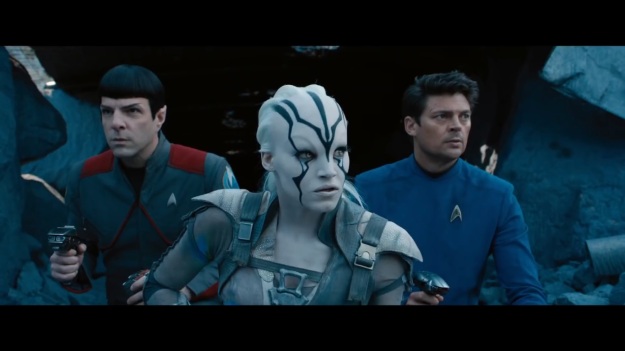