I was probably on the kinder end of things than most people when it came to Suicide Squad; the DCCU’s attempt to be fun and wacky that ended up having all the edge of a limited edition holo-foil issue of Spawn from 1994.  In its own tacky cobbled together way it did manage to eek out a bit of charm, but what people mostly remember from the movie was the performances; namely one Harley Quinn played with gusto by the phenomenal Margot Robbie.  Now that we’re more or less in DCCU 2.0, it makes sense for this character to be given another shot away from the baggage of the movie that came before; even from the studio itself as Robbie basically put this thing together with Warner Bros maintaining a mostly hands off approach.  Is this the breakout hit that Warner Bros has been hoping for yet could never make themselves, or is this a desperate Hail Mary that misses by a mile?  Let’s find out!!

Harleen Quinzel (Margot Robbie) has had a rough go of it lately.  She grew up with scary nuns, she had a string of bad relationships, she did at least get her college degree and became a psychiatrist but even THAT didn’t work out when she met some dude in clown makeup, and on top of that she had to fight a an ancient demon witch person or else have a bomb explode in her neck!  Fortunately she’s out of prison and she even dumped the clown dude so she’s ready to start her life anew!  A new pet, roller derby, and COPIOUS amounts of alcohol to deal with the unresolved feelings that she’s left with now that she’s single and away from the clown that made her life miserable.  BUT ENOUGH ABOUT DAVID AYER (Ba-dum-tiss!), with the Joker in her rearview mirror it has given her a lot more freedom but also the ire of ALL the people they screwed over in the past, and as the one on the short end of this breakup some of them are ready to take their vengeance!  One such vengeance taker is Roman Sionis (Ewan McGregor) who’s a mid-range mob boss with a hot temper, enough toxic masculinity to smother ALL the adorable baby ducklings of the world, and an alter ego just one step below Taser Face; BLACK MASK!  Complete with second rate Die Hardman cosplay!  Him and his associate Victor Zsasz (Chris Messina) are not only after Harley but ALSO after a diamond that somehow ended up in the hands of a young street hustler named Cassandra Cain (Ella Jay Basco) and so perhaps there’s a way to kill two birds with one stone there, and on top of ALL that we also have a singer at Victor’s club named Dinah Lance (Jurnee Smollett-Bell) who’s looking for a way out of the life, a mysterious crossbow killer (Mary Elizabeth Winstead) who’s hunting down gangsters, Renee Montoya (Rosie Perez) who’s stuck trying to untangle all these messy knots.  Will Harley Quinn escape the payback that’s owed to her after working with the Joker for so long?  Why is Roman so intent on getting this diamond, and who else may be gunning for it?  Why DO they end up calling themselves the Birds of Prey anyway? 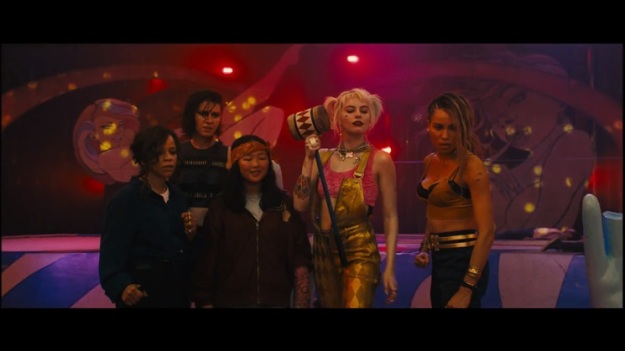 “What, you don’t think it sounds cool and intimidating?”     “Hey, as long as you don’t put a bomb in my neck, I’m fine with anything!”

END_OF_DOCUMENT_TOKEN_TO_BE_REPLACED

Two things I’m not particularly well versed in are zombie movies and Jim Jarmusch movies; the former because I find many entries in the genre to be tedious and the latter because I haven’t gotten around to them yet.  Good thing I get to kill two birds with one stone here as I guess even he couldn’t resist the allure of big box office gold with yet another zombie film!  Then again, we’re kind of on the other side of the whole zombie craze, so maybe this is the PERFECT time for his indie sensibilities and surprisingly extensive connections to make the ultimate commentary on the modern interpretation of the genre!  Or maybe it’s just a goofy comedy with the dude from Star Wars and Selena Gomez.  The point is that you can never pin this guy down to just one thing, so it’s probably both at the same time.  The REAL question though is whatever it ends up being, is it any good?  Let’s find out!!

Police Chief Robertson (Bill Murray) and Officer Ronnie Peterson (Adam Driver) are living out their lives patrolling the small town of Centerville without much to worry about other than Hermit Bob (Tom Wait’s) possibly stealing chickens and the dead body in their police station that someone from the big city promises to pick up real soon.  The town is filled with lots of colorful characters like Farmer Miller (Steve Buscemi) who’s a racist jerk, Hank Thompson (Danny Glover) who’s clearly getting too old for whatever it is that he does, and Bobby Wiggins (Caleb Landry Jones) who runs a really cool gas station filled with old school horror movie merchandise, and all of them certainly have their concerns about reports of the Earth being pushed off its orbit due to arctic fracking, but it’s not something they have much control over so they just keep doing what they’re doing.  Sadly for the citizens of Centerville (except for Farmer Miller because screw that guy), the grave environmental catastrophes thousands of miles away seem to be having a global effect and the dead start to rise from their graves.  Chief Robertson and Officer Peterson, along with the third and final cop in the town Officer Morrison (Chloë Sevigny) have to figure out the best course of action for dealing with this nonsense and they could use a little help from the new undertaker in town Zelda Winston (Tilda Swinton) who seems to know her way around bladed weapons and might just have a plan for dealing with the undead rising from their graves.  Can the cops as well as the rest of the citizens of Centerville survive this literal night of the living dead?  What can be done even if they do survive it now that the Earth has changed its orbit and the moon is now glowing for some reason?  What even was the last zombie movie I saw?  Does Overlord count?

“Look, all I’m saying is that Nazi Zombies are technically zombies if you want to get pedantic about it, but they never follow the traditional zombie formula.”     “What about Dead Snow?”     “That was INTENTIONALLY tongue in cheek about its premise!  It doesn’t count!”