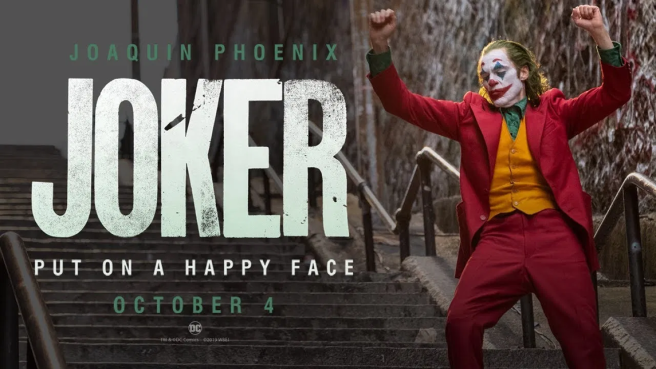 Joker and all the images you see in this review are owned by Warner Bros. Pictures

Are we ready to do this?  Alright, let’s do this.  So Joker always seemed like an odd choice for a movie as his defining moments have always been in relation to Batman.  Take him away, and what are you left with?  Well if the trailers are any indication, you get something akin to Travis Bickel in Taxi Driver by way of Krusty the Clown.  I mean I was at least interested to see where they were GOING with it since the trailers did a solid job of obscuring what the actual plot was, but the last few weeks of bad press have really drained any enthusiasm I could muster for what was already seeming to be a novelty at best.  Does this manage to rise above the controversy surrounding it, especially the controversies cynically generated by those who have an active stake in the film’s success, or will this all be for a movie that ultimately isn’t worth the time and effort?  Let’s find out!!

Arthur Fleck (Joaquin Phoenix) is one of many residents in the city of Gotham who is barely getting by and can feels that life has given him a rather crappy lot.  All he wanted to do was be a comedian and make people smile, but street punks keep beating him up at his job, the rich politicians and lobbyist keep cutting social services that he needs, and on top of all that he has to take care of his elderly mother Frances Conroy) who’s unshaking belief that Thomas Wayne (Brett Cullen) will help her and her son has only become more and more obnoxious as the years have gone by.  Why… it’s almost enough to drive someone MAD isn’t it!?  Like say… if someone got so tired of this that they started wearing clown makeup and robbed banks!  Well leave those fantasies at home as this is the REAL Joker for the modern age in that he’s really angry all the time but doesn’t do a heck of a whole lot about it and what he DOES do about it isn’t as… let’s say FLAMBOYANT as his comic book persona would have you believe.  Still, the walls are closing in more and more as Arthur’s life goes further and further into chaos to the point that he may just be forced to fight back in a way that no one could possibly expect; least of all himself.  Will Arthur’s miserable life come to some sort of hilarious denouement that gets all the squares to pop their monocles?  What effect will his actions have on the rest of the city, and is he really so different from all the normal people out there?  Seriously, is this REALLY the guy Warner Bros wants to be spouting his manifesto on the big screen right when they’re getting the DCCU back on track?

END_OF_DOCUMENT_TOKEN_TO_BE_REPLACED

Oh look!  A January comedy!  THOSE ARE ALWAYS GREAT, RIGHT?  Okay fine, we are definitely in the dumping ground season so anything that comes out now is either a piece of crap that got pushed back or an earnest effort trying to make a name for itself but wasn’t confident it could hack it any other time of the year.  Still, we all love Robert De Niro, right?  It’s not like he’s been in a bad comedy before… oh wait.  Boy, there is not a lot going for this movie.  How bad can it be?  Let’s find out!!

The movie follows the misadventures of Jason Kelly (Zac Efron) and his grandfather Dick (Robert De Niro) whose wife had just died and he plans to honor her memory by going to Florida as they had already planned to do before her death.  He needs someone to drive him because his driver’s license has been revoked, and the only one with a big enough heart to help the guy in his time of need is the aforementioned grandson.  Despite having his wedding only a week away (as well as an important meeting at the law firm coming up soon), he takes the old man on this trip from George to Florida but finds out very quickly that the man’s switch has flipped so hard that now he’s masturbating without warning, drinking constantly, and trying to stick his finger up the dresses of any girl he comes across.  Will the very uptight and nervous Jason be able to handle this brand new grandpa that has entered his life?  Will Robert De Niro get to fuck at least one more time before he dies?  What obvious revelations will the both of them make over this bonding experience which involves massive amounts of drugs, multiple arrests, and swastika dicks?  Does anyone else get the sense that this movie is trying WAY too hard?

END_OF_DOCUMENT_TOKEN_TO_BE_REPLACED 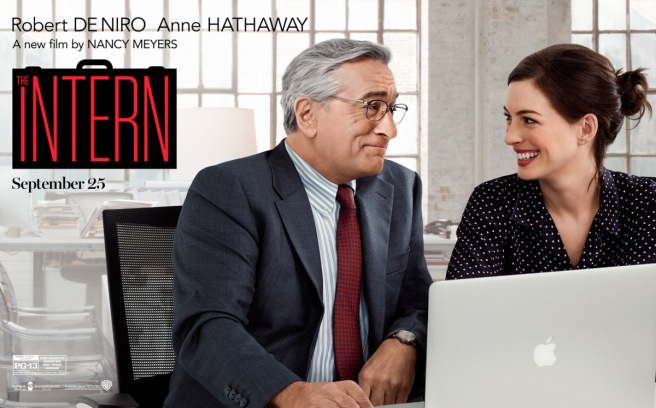 Oh hey!  Robert DeNiro is in yet another a wacky comedy because THAT always works out, right!?  Sure, he was funny in… um… Brazil I think, but for every GOOD comedy he does, he makes a Focker trilogy or Rocky and Bullwinkle to remind you that he CAN be funny but tends not to pick good projects to show it.  Still, there’s no denying that the man is a brilliant actor and he has a strong costar here in the form of Anne Hathaway who’s so good that she managed to be the most memorable aspect of a Batman movie.  Will this be an enjoyable romp with two venerable actors, or will this be yet another embarrassing comedy for two people who you’d think would be above this kind of material?  Let’s find out!!

The movie is about 70 year old Ben Whittaker (Robert De Niro) who’s been retired for quite some time now and is sick to death of it, especially since his wife has recently passed away.  He really doesn’t have anything else that he wants to do with his time and would rather find a way to be useful once again than spend the rest of his life going on vacations and learning Mandarin.  Hope seems to come his way when he finds a flyer for a company that’s looking to bring retired people bring into the workforce as interns.  The company in question, About the Fit, is run by Jules Ostin (Anne Hathaway) and the little startup has skyrocketed beyond her wildest dreams in a very short amount of time.  All is not well though as some people at the company are wondering if she can handle everything now that the company has become such a hit.  Will Ben finally find a passion for life again now that he has something to challenge him? Will Jules be able to manage her life as the CEO of this fashion retailer while still making time for her family?  Will these two get into all sorts of hijinks because old people and young people working together is apparently a GOLD MINE for comedy!?