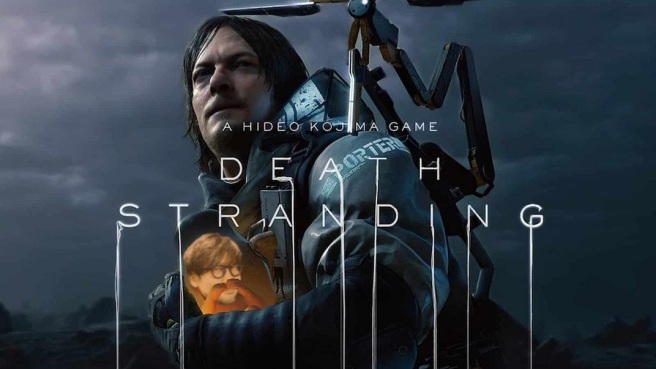 I’m not gonna lie, I’ve been pretty down on Kojima’s latest game for a while now.  Sure, we all got caught up in the hype when we first saw naked Norman Reedus and were left wondering what could all that nudity mean, but by the time that Del Toro got his own trailer and the babies became more and more… prominent (let’s go with that word) in the narrative, it all felt like a splash of cold water on the face; a revelation that he may be throwing things against the wall to see what sticks rather than doing something with any real thematic heft to it.  But I could be wrong!  I fully admit that watching trailers like this aren’t always a clear indication of what the final product will be like, such as the case with Dead Island or even The Order 1886, and frankly it all feels very intentional; as if he’s trolling for hundreds of videos breathlessly narrating their ideas of what this could all be about, and playing into that game is harmless but feels rather futile.  Still, I’ve also been trying to get better at judging films in a non-literal fashion, and Kojima is if nothing else a VERY frustrated filmmaker!  Until someone in Hollywood gives him a chance to direct something he’s gonna take it out on all of us by making the most bizarre and ludicrous trailers imaginable for supposed video games, and while I can’t really get mad at it, I just don’t feel the hype anymore.  But hey, I’m already here and there’s a new trailer out with ACTUAL gameplay footage, so let’s at least take a look at what we know so far and see if there’s anything worthwhile to gleam from all this!

…What? – The First Two Trailers

As I said, I gave Kojima a lot of credit for that first trailer which was strange, provocative, and surprisingly vulnerable with some clear themes about loss, grief, and the way that male identity (in how we are socialized) play into those experiences.  It sets a very apocalyptic tone with the dead animals, the copious amounts of oil (or an oil like substance), and the washed out aesthetic which goes along with the idea that this world is dying in some way.  Not a bad way to kick things off, and Kojima couldn’t have been more popular at the time due to his recent fallout with Konami which made it a perfect storm of intrigue and feel good sentimentality.  By the second trailer though, I was starting to get worried.  Yeah seeing Pappy McPoyle (also known as Guillermo del Toro) carrying around a baby in a war torn city did advance the narrative at least somewhat since we know how some other people are reacting to the end of the world, but I don’t think the trick works twice and this felt more like a holding pattern than anything else.  When we should have been getting hyped for the GAME, it was still being incredibly coy about everything.  Now we had to start asking questions about the weird fetus thing, the black goop that keeps showing up, and new things like the soldiers with skulls for heads being lead around by Mads Mikkelsen!  Don’t get me wrong, I LOVE Mads Mikkelsen, but I was starting to get a bad feeling that Kojima left entirely to his own devices is gonna end up missing the forest for the trees when developing this.

END_OF_DOCUMENT_TOKEN_TO_BE_REPLACED

Rogue One: A Star Wars Story and all the images you see in this review are owned by Walt Disney Studios Motion Pictures

In what will surely be a yearly tradition until the day we all die, Disney has given us our holiday present in the form of another Star Wars movie.  We’re only at two so far which means they PROBABLY aren’t gonna start half-assing these just yet, and in fact this one seems to be willing to take a few more risks than what we would normally expect from franchise features like this.  Okay, the fact that it’s a one-time spin off means that they’re only so much damage this can do if it blows up in their faces, but the tone of the trailers and the nature of the story they’re telling at least inspires some hope that the franchise has gotten so big that they’re willing to let it take some chances.  Does this experiment in growing the series turn out to be a total success, or will this somehow be the worst prequel yet?  Okay, I kind of doubt that’s even possible, but you never know!

The movie begins a long time ago in a galaxy far far away where little Jyn Erso (Beau Gadsdon) has her life completely uprooted when her family is found by Orson Krennic (Ben Mendelsohn) who is a high ranking member of the galactic empire.  Why did this guy hunt halfway around the galaxy for them?  Well it turns out that Jyn’s father Galen (Mads Mikkelsen) is an Empire scientist who defected and they need him back to finish some super weapon they’re working on.  The good news is that Jyn manages to escape the Empire with the help of a family friend Saw Gerrera (Forest Whitaker).  The bad news is that her mother (Valene Kane) got killed in the process and dear old dad got kidnapped.  Flash forward to sometime later where we meet grown up Jyn (Felicity Jones) who’s been rebellious youth-ing all around the galaxy and winds up at Rebel headquarters where they have a proposition for her.  Go with the rebel agent Cassian Andor (Diego Luna) to find her father and stop him from finishing the Death Star as he seems to be looking for a way out once again.  Okay, it’s not QUITE that simple, but that’s the basic idea of what they’re trying to do!  Anyway, they’ll point her in the right direction in the hopes that her skills and connections will kill two birds with one stone; she gets her dad back and they get to stop the Space Nuke from being completed.  Of course, nothing is as easy as it seems and there’s plenty of treachery to go around as the mission becomes only more difficult once the Empire get wind of what they might be up to.  Can Jyn save her farther before the Empire find out if he’s been undercutting their progress on the super weapon this entire time?  Does Cassian have a hidden agenda that he’s not telling Jyn about?  On a scale of one to Vader, how screwed are they?

END_OF_DOCUMENT_TOKEN_TO_BE_REPLACED

So on the one hand, I don’t’ really have any love for Doctor Strange as a character, and I’m still a bit salty that they didn’t cast Hugh Laurie in the role which I have been fan casting since the film first got announced all the way back in what, the beginning of phase two?   On the other hand I’ve been a fan of C Robert Cargill as a film critic all the way back in the good ol’ days of Spill, so there is a part of me that wants this to succeed just because I like that ONE GUY.  Then again it’s a Marvel movie, so it’s going to succeed anyway.  LOOK!  It’s complicated, alright!?  I don’t put myself is some sort of cryogenic fridge between movies so my “precious objectivity” is working at peak efficiency!  Actually, I should probably look into that and see if I can skip most of the next four years…  ANYWAY!  Does Doctor Strange deliver on all the weird fun that the trailers are promising, or is this another cookie cutter entry in the ever expanding Marvel canon?  Let’s find out!!

The movie follows Stephen Strange (Benedict Cumberbatch) who is a world renounce Neurosurgeon with an ego the size of Hulk’s biceps and ends up smashing the hell out of his car while texting.  Fortunately, the only part of his body that was harmed was his hands, but unfortunately he can’t be neurosurgeon if he can’t even pick up a pencil.  Now instead of starting a diagnostics department and act super snarky to his subordinates, he instead blows his fortune trying to get his hands fixed to no avail while also pushing away his only real friend Christine (Rachel McAdams) due to his increasingly bitter outlook on life.  His last resort is this temple in Kathmandu Nepal which healed someone else with even worse debilitating injuries and finds someone to take pity on him in the form of Mordo (Chiwetel Ejiofor) who takes him to see THE ANCIENT ONE (Tilda Swinton).  She blows the puny human’s mind away with what can only be described as a drug trip, but I think the implication is that she just gave him a small taste of what the universe has to offer, and she begrudgingly takes him on as a disciple despite his arrogance and penchant for being whiney.  Of course, there might be ANOTHER reason why she wants at least one more meat shield training at their monastery.  You see, the LAST prized pupil of The Ancient One was some jerk named Kaecilius (Mads Mikkelsen) who’s now trying to do some bad stuff and will probably be coming for her bald ass soon enough, so the more bodies on hand to absorb energy blasts, the better.  Will Stephen Strange find what he is looking for in the teachings of the ancient one?  What is Kaecilius after and why is he so pissed about everything?  Seriously, what the hell were they smoking when they were making this?