There’s a lot going on right now and as much as I’d honestly like to take a step back from the heavier subject matter to focus on terrible horror films and laughable thrillers, well… there’s a bigger story that needs to be told and at the very least I can try to stay engaged with the films that are being made because of it.  Fortunately the films this year that faced issues of racism, white supremacy, privilege, and state sponsored oppression have been pretty great so far with The First Purge being a worth addition to one of the best film series we have today, Sorry to Bother You feeling like the kind of gonzo shot in the arm film making that will inspire others to think outside the standard feature film model, and Blindspotting being a supremely empathetic examination that’s palatable and poignant for any audience member.  However, it’s time for the king to return to his throne as Spike Lee has spent his entire career (barring Oldboy) speaking on these very issues that the rest of Hollywood is just catching up to and is now throwing their weight behind these artists.  Did Spike Lee make the definitive film of our turbulent times, or has his style gotten tiresome in the face of newer voices in his political circle?  Let’s find out!!

The movie follows the strange yet true story of Detective Ron Stallworth (John David Washington) who joined the Colorado Springs police force in the seventies and not long after joining the force started a sting operation against the KKK in the area.  With the help of a fellow cop Detective Flip Zimmerman (Adam Driver) he managed to impersonate a white supremacists over the phone while Flip would pretend to be him in person; a plan that was so successful that they even managed to dupe KKK Grand Wizard David Duke (Topher Grace) who had several conversations with Ron never realizing he was in fact black.  As the investigation goes along though, things start to get complicated as certain members of the Colorado chapter of the KKK start to suspect their newest recruit, and Ron start to find it hard to live not only a double life as a fake white man, but also the dichotomy of being a black man and a police officer in that period of time; especially when he starts falling for the President of the Black Student Union Patrice (Laura Harrier) who is just as militant against white systems of power as Ron is determined to use his position in said system to take the KKK down a peg.  Will Ron and Flip manage to stop the KKK from whatever it is they’re planning without getting caught in the crossfire themselves?  How far will the KKK members go to assert themselves as a threat to be taken seriously, and who do they plan to hurt in the process?  Just how many white people jokes can Ron get away with before David Duke becomes suspicious!? 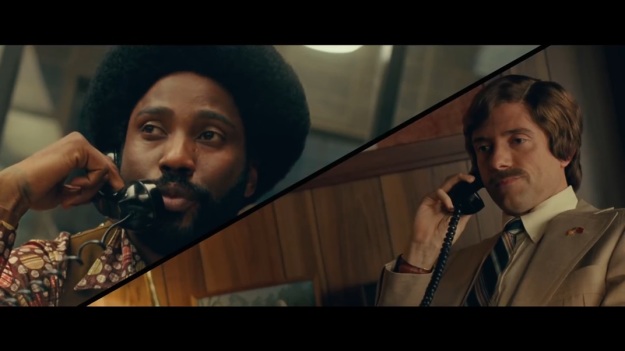 “Let me ask you this, my pure white brethren!  How many KKK members does it take to screw in a light bulb?”     “I don’t think we covered that in the manual…”

END_OF_DOCUMENT_TOKEN_TO_BE_REPLACED

Spider-Man: Homecoming and all the images you see in this review are owned by Sony Pictures

So after a decade of crappy reboots and custody battles, Spider-Man is finally gonna start living with BOTH his parents; sticking with Sony but being able to visit Disney on the weekends.  To celebrate these two studios begrudgingly working together to make a lot of money, we have the third reboot of the Spider-Man franchise getting a whole move all its own with a little from column Sony and a little from column MCU.  Considering how bad things had gotten for the character with the two Amazing Spider-Man movies and how reliable the MCU is when it comes to making above average blockbusters, it’s unlikely that this will end up a disappointment for anyone who’s been hoping to see a Spider-Man movie with the official Marvel stamp of approval, but if it can ONLY manage to be better than the previous iteration… well I can hardly think of a more textbook definition of Damning with Faint Praise.  Does this manage to stand on its own as a great film, or has Marvel finally met its match by having to work with another studio for once!?  Let’s find out!!

The movie picks up right after Civil War where Peter Parker (Tom Holland) is spending his day doing his Friendly Neighborhood Spider-Man thing, but is getting antsy over the fact that Tony Stark (Robert Downey Jr) won’t return his calls.  Neither will Happy (Jon Favreau) who’s supposed to be keeping an eye on him and is clearly doing a poor job of it since even a LITTLE bit of attention might have kept him from doing something stupid!  Said stupid thing is when he starts tracking down a group of alien gun smuggles head up by Adrian Toomes who played by Michael Keaton (Oh hey!  I guess he DID live long enough to become the villain!) and soon finds himself in over his head.  Not only does he have to deal with REAL tough guys instead of street thugs, he also has to deal with the problems of being a teenager such as having a crush on a senior named Liz (Laura Harrier) trying to sneak around Aunt May (Marisa Tomei) and having to deal with his friend Ned (Jacob Batalon) who accidently found out his secret identity.  Can Spider-Man stop the bad guys AND get his math homework done?  Will Tony Stark eventually notice him once he takes down such a dangerous criminal, or will that only make things worse between them?  Oh I’m sure he can handle all this!  He’s a super hero, right!?