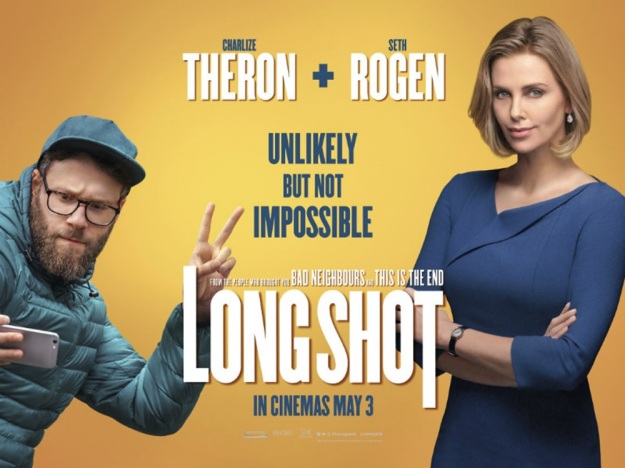 I love Seth Rogen!  Have I mentioned that before?  Knocked Up, Neighbors 2, The Night Before, all are great movies that I’ve watched multiple times and showcase just how talented the guy is.  Now we’ve got a movie with him AND Charlize Theron, one of the hardest working actors working today with so many great movies under her belt!?  Well dang!  How had I not heard about this movie before!?  Seriously, considering how many times I go to the movies you’d think I’d have seen one trailer but no!  I hadn’t even heard of this until about a week ago and I had no idea what it was even about, but hey, when do you watch a comedy for the plot?  I’m here to see these two work off of each other and tell some funny jokes!  Does this team up manage to knock it out of the park like peanut butter and chocolate, or are we in for an experiment that’s gone more horribly awry than whatever the heck it is Oreo has been pumping out recently?  Let’s find out!!

Fred Flarsky (Seth Rogen) is a journalist with a serious chip on his shoulder who’s had a rough time of it recently and Charlotte Field (Charlize Theron) is the Secretary of State who’s had a rough time of it always.  Two people from two vastly different worlds who you wouldn’t think would ever meet, but in movie land these two have something of a history as Charlotte used to babysit Fred when they were younger and there was an embarrassing incident between the two of them.  Still, fate seems to conspire to bring them back together as Fred loses his job and is brought to an upper class party by his friend Lance (O’Shea Jackson Jr) where Charlotte just so happens to also be.  They talk for a bit, Fred makes a fool of himself when trying to confront an evil media conglomerate (Andy Serkis) and you’d figure that life would just keep on going from there.  However, Charlotte starts to read some of Fred’s earlier work and comes up with a brilliant idea!  See, she plans on running for president as the current guy (Bob Odenkirk) won’t be running for a second term to instead make movies and so she needs a speech writer who can write funny and incisive commentary that she can pepper into her usual rhetoric, so going on quite a limb here she hires Fred for the job despite him being… well a boorish man child who can barely even dress himself.  Naturally her staff isn’t too thrilled included her top aids Maggie and Tom (June Diane Raphael and Ravi Patel), but everyone goes along with it and Fred, if nothing else, seems to write decent speeches and the two begin to reconnect once more; possibly with more going on between them than either initially realized.  Can Fred be the necessary piece that Charlotte has been missing in her life, and is Fred even capable of being what she needs him to be?  What sinister actors out there will try to undermine Charlotte’s campaign, and how will Fred react to the realities of being part of the political machine on such a large stage?  Seriously, how did this jacket alone not destroy her political career?

“I didn’t realize the Blue Meanie was getting into politics!”     “Say what you will about the Blue World Order, they at least have a sound economic platform!”

END_OF_DOCUMENT_TOKEN_TO_BE_REPLACED

Despite being one of the big up and coming comedians for the past few years, I’ve never had any real exposure to Amy Schumer’s work.  Whether it’s her stand-up, her show Central, or even her previous movies like Trainwreck, she just never managed to come into my radar and I haven’t had much inclination to seek her stuff out.  As far as this movie, I GUESS I’m interested to see how it turns out, not just so I can finally get in the loop with someone worth keeping an eye on, but because she also managed to get Goldie Hawn to costar who hasn’t been active in quite some time!  That said, it looks to be another raunchy comedy (and not a particularly interesting one) which we certainly have plenty of already, but then again it’s never easy to tell just how well the jokes will land or how strong the interplay is between the leads just from trailers alone.  Does this manage to be a standout film starring one of Hollywood’s rising star next to one of Hollywood’s best, or will this turn out just as bad as Dirty Grandpa?  Let’s find out!!

The movie begins with Emily Middleton (Amy Schumer) getting dumped by her longtime boyfriend (Randall Park) just before they take their non-refundable trip to Ecuador; leaving her with a broken heart as well as an extra ticket that none of her friends (or even her landlord) wants to take her up on.  While visiting her overbearing and obsessively cautious mother Linda (Goldie Hawn), she finds an old photo album that shows what an exciting life she led before having kids and she decides to take her on the trip.  It takes a bit of cajoling, but Linda finally agrees and they head to South America where Emily meets some suave mother fucker (Tom Bateman) that gives her the perfect vacation experience and promises to take her AND her mother out for even more fun the next day.  Turns out that he’s the bait for a kidnapping ring which puts a HUGE damper on their vacation and they now have to find a way to not only escape but find a way back to the American embassy before they get into even MORE trouble.  While this is going on, Emily’s brother Jeffrey (Ike Barinholtz) is doing what he can to get the State Department to Seal Team 6 their asses out of there, but with his agoraphobia and poor social skills, he may not be up to the task despite everything that’s at stake… or is he?  Can these two survive not only the harsh jungle environment but survive having to deal with each other for that long?  What wacky supporting characters will they manage to run into along the way?  Wait, is this seriously from the same person who wrote Ghostbusters!? 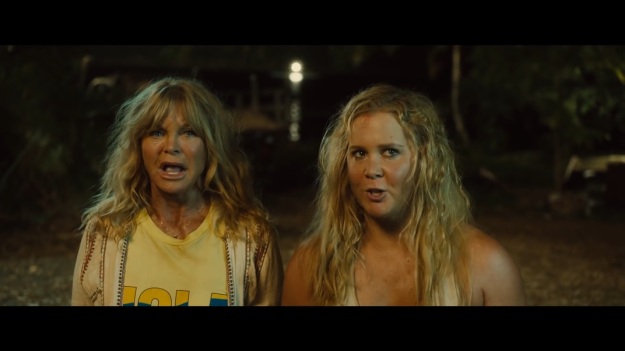 “I saw Taken.  If we just keep our heads down and don’t rock the boat, someone will come and save us.”     Mom, our Liam Neeson is your thirty year old son who can’t even face the neighborhood dog.  We are screwed!”     “Now why do you have to talk about your brother that way?”

END_OF_DOCUMENT_TOKEN_TO_BE_REPLACED

Is it too late to declare a war on Christmas?  I don’t mind the holidays, but I’ve also worked in retail so I got a firsthand look at the Christmas calendar creep and how NO ONE likes to push this shit in October, let alone November.  Thankfully they ALMOST waited until December to start throwing out holiday films with last week’s Love the Coopers and now The Night Before.  Unlike that other film though, I was REALLY looking forward to seeing this because I love Seth Rogen and his particular brand of comedy.  Not everything he’s been a part of has been great (I thought The Interview was pretty underwhelming), but I always like to see what he does next which this time seems to be pretending he’s in the same age group as Joseph Gordon-Levitt and Anthony Mackie.  Wait a minute.  HE’S THE YOUNGEST ONE OF THEM!?  Huh.  Learn something new every day.  So will this be the kind of movie to bring out the holiday cheer and break out the eggnog, or will this make everyone feel even Grinch-ier than they already are at this time of the year?  Let’s find out!!

The movie follows the adventures of Ethan, Isaac, and Chris (Joseph Gordon-Levitt, Seth Rogen, and Anthony Mackie) on their last big Christmas Eve together before ending their tradition.  You see, about fifteen years ago Ethan’s parents were killed by a drunk driver right around Christmas time and so his friends decided that they will spend the holidays with him which soon became a tradition.  What also became a tradition is that they would party their ASSES off because they were young when they started it so of course that’s what they ended up doing.  However, it’s been going on for way too long and Isaac and Chris have their own things going on while Ethan is still stuck in place, unable to get his life going.  Still, he agrees to this being the last time they make this a big party event and even has a surprise for his friends that will make this the best one of them all.  There’s a super-secret party that takes place every year (the Nutcracker Ball) that they’ve never had a chance to go to because they could never find out where it was or how to get invitations.  Through sheer luck, Ethan finds three tickets for the damn thing at his shitty job and steals them without a second thought so that he and his friends can have the greatest night of their lives!  Will this final night be all it’s cracked up to be, or are they just too damn old to keep going the way they’ve been going even for one more night?  Will they be able to salvage their friendship despite the changes in their lives that makes it harder for them to find the time?  Wait, how fucking deep is this movie about taking drugs and Christmas shenanigans!?