Seriously.  It’s not funny anymore Garry Marshall.  Whoever’s paying you to do this or whoever has your family hostage NEEDS to be stopped.  For the third time in a damn row, Garry Marshall is trying to rip off Love Actually by taking the formula and centering on other holidays that seem to be chosen at random.  I wouldn’t be surprised if the next movie is about Arbor Day and Julia Roberts plays a tree in it!  So is this one just as bad as the rest?  Yes.  Yes it is.  No point in giving you false hope.  Let’s just get this one over with…

The movie is separated into four stories.  Jennifer Aniston has to deal with the fact that her ex-husband has remarried a much younger woman and they are both dazzeling the kids with fun trips, junk food, and rock concerts while she’s at her house doing everything else for them.  Jason Sudeikis is a widower whose wife passed away about a year ago and he’s still dealing with the grief while trying to raise his two daughters.  Britt Robertson is a woman who’s raising her infant daughter with her boyfriend, but she also has her own demons to work out as she has never met her birth mother who is an HSN host played by Julia Roberts.  And finally, KKate Hudson and Sarah Chalke play sisters who have married people their parents would not approve of (an indian man played by Aasif Mandvi for the former and another woman played by Cameron Esposito for the latter) and they are no longer able to hide this fact from them since they have made a surprise visit.  Each of these stories are loosely connected by the fact that some of the characters know each other as either friends or in a professional sense, and we follow our heroes as they learn to get over their problems, make up for mistakes they’ve made, and become better people in the process.  Oh and there’s a holiday in here… I guess.

END_OF_DOCUMENT_TOKEN_TO_BE_REPLACED

After the cinematic horror show that was the ill-conceived Pixels, Adam Sandler was banished to the world of streaming and will not be allowed back into theaters until his penance of four movies is paid!  Okay, the four movie deal with Netflix was already underway before Pixels (or even Hotel Transylvania 2) was released, but considering how absolutely dreadful his career has been with the movies under the Happy Madison umbrella, it really does feel like he needs to be taken out of the spotlight for a while just to see if the change in scenery will bring some life back to him and his chosen profession.  Is The Ridiculous 6 the movie that will finally bring him back to top form, or is this yet another pointless exercise from a man who gave up on being funny a long time ago?  Let’s find out!!

The movie begins with, what else, RACISM!!  Seriously!?  I can’t even get thirty seconds into an Adam Sandler joint before I’m itching to turn the damn thing off!? 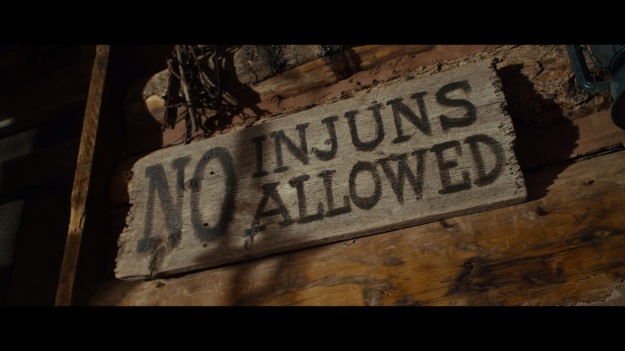