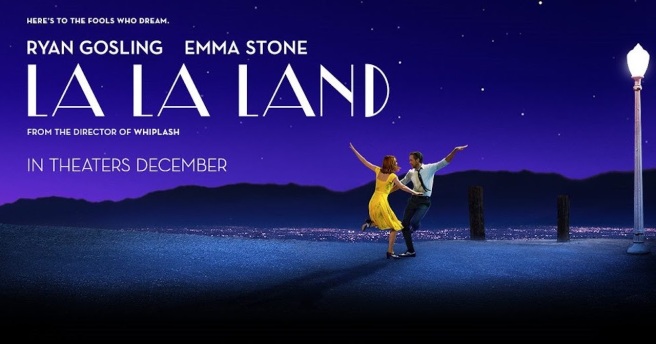 Well this certainly jumped to everyone’s best of the year list, didn’t it?  Too bad I didn’t get to see it in 2016 as the wide release wasn’t until January, but hey, at least I get to see it AT ALL.  I mean who DOESN’T love song and dance numbers interwoven into a classic Hollywood love story, especially when it’s done as well as this one is supposed to be?  Does this manage to be a film for the ages like those it takes its greatest inspiration from, or is this a mere copycat that doesn’t have a true identity of its own?  Let’s find out!!

The movie takes place in present day Hollywood where we follow the struggling actress Mia (Emma Stone) and the struggling Jazz pianist Sebastian (Ryan Gosling) as they struggle their hearts out for their dreams and manage to find each other in the process.  While Emma wants to simply get her big break, Sebastian has much more specific aspirations as he wants to open his own Jazz club right in the heart of the city, which is gonna be difficult because he’s flat broke and can’t even keep a steady gig going because he doesn’t want to play the set list provided… because he’s an artist I guess.  Still, they manage to scrape by as they keep working towards their dreams while also putting on elaborate and non-diegetic song and dance numbers for our entertainment!  Will the realities of the business crush their spirits and drive them apart as more and more chances start to slip away?  Can a movie this unabashedly old fashion manage to work in a modern day context?  Did they manage to outdo Tarantino as far as movie references!?

END_OF_DOCUMENT_TOKEN_TO_BE_REPLACED

Well I guess if Oliver Stone got to make a George W Bush movie during his last year of office, I guess it’s not THAT outlandish for the same to happen to our first black president, though admittedly I get the feeling this one isn’t going to have as much beef with the sitting president as Oliver Stone did when he made his movie.  Now that I think of it, an Oliver Stone Obama movie would be pretty interesting.  I guess we’ll have to see if he shows up in Snowden.  ANYWAY, does this film about Barrack and Michelle’s first date manage to fill us with warm fuzzies about the soon to be former and definitely future presidents of the Unite States, or is this just a thinly veiled propaganda piece to help preserve the legacy of a President whose career really doesn’t need such blatant evangelism?  Let’s find out!!

The movie isn’t all that complicated as it really is just one day with Barrack (Parker Sawyers) and Michelle (Tika Sumpter) as they go out on the town in 1989 Chicago.  Michelle though doesn’t believe this to be an ACTUAL date, so I guess that will serve as our major conflict as Barrack tries to warm himself up to her, but she does have pretty legitimate reasons to not let this outing go any further than it needs to; particularly the fact that she’s his supervisor at a law firm that she’s worked her ass off to get a modicum of respect at.  Still, there’s no denying that Barrack charm which he puts to full effect as they travel all over scenic Chicago (or at least the good parts of Chicago) while also helping a local community come together to fight for a Community Center to be built in their neighborhood!  Can Barrack manage to win Michelle’s heart before the day draws to a close?  Will Michelle be forced to choose between her career and a guy who seems to be a perfect match for her?  How do they not run out of things to say to each other!?  Their first date is like twelve hours long!!