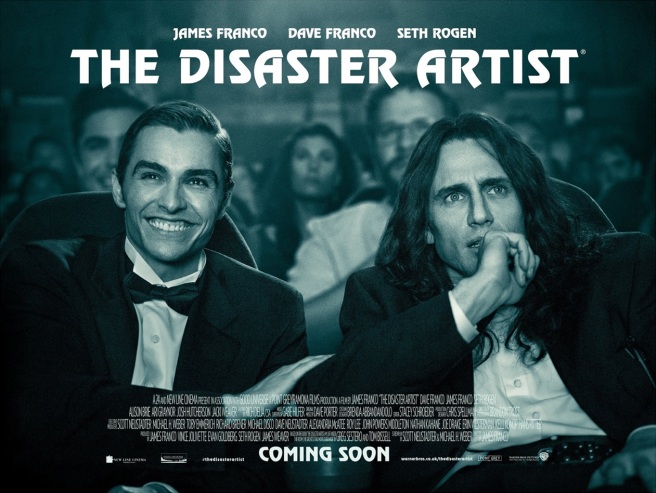 I may not be as over the moon in love with The Room as plenty of other people are, and it has admittedly lost a bit of its charm once you realize just how misogynistic the whole thing is, but it certainly has my respect as being one of the more unique examples of a GOOD BAD MOVIE due in no small part to the auteur himself, Tommy Wiseau.  Now he’s far from the only ridiculously cocky creatives out there who write, direct, and star in what they perceive to be their one true masterpiece (*cough* Old Fashioned *cough*), but with Mr Wiseau there’s a genuine sense of mystery about the guy as many details of his origin are STILL unknown to this day (HOW IS THAT EVEN POSSIBLE IN THE INTERNET AGE!?) and his… shall we say UNIQUE brand of acting certainly sets him apart from many of the other low rent struggling artists out there.  No doubt there is a VERY interesting story to tell about this one guy, his one movie, and his friendship with co-star Greg Sestero, which the wannabe auteur himself James Franco has opted to do by adapting Greg’s book The Disaster Artist into a motion picture; one that he directs, produces, and stars in of course.  Will this examination of one of Hollywood’s biggest oddities be a worthwhile exploration of the creative process and what it truly means to be an artist, or are we just desperately trying to milk a novelty that had lost its luster many years ago?  Let’s find out!!

The movie follows the journey of two men; aspiring actor Greg Sestero (Dave Franco) and… I guess aspiring actor as well Tommy Wiseau (James Franco).  The two meet in an acting class where Greg finds the eccentric weirdo with bad hair and a worse accent rather endearing for his utter fearlessness and ability to throw himself out there in ways that Greg is still struggling to do despite his hopes of becoming an actor.  Because of Greg’s admiration for Tommy and Tommy’s love of being admired, the two move in together and work their way through Hollywood; getting small gigs here and there but nothing that will truly set them apart from the thousands of other working actors cluttering the streets of LA.  After a particularly rough string of bad luck, Tommy eventually starts writing his own movie and wants none other than Greg himself to be the co-star.  The Room is what he titles his masterpiece and he funds it himself with his seemingly unlimited supply of money but things go from awkward to unsustainable as Tommy’s ego and complete inexperience with the process starts escalating tensions with the cast and crew and even with his best friend Greg who’s trying to stick by him but is finding it hard and harder to deal with Tommy’s unpredictable behavior.  Can Tommy find it within himself to get past his issues and foster a good working environment for the only people in the world who are helping him achieve his dreams?  Will Greg stand by his best friend, or will he realize just how much Tommy is holding him back?  WILL THE WORLD EVER UNDERSTAND THE BRILLIANCE OF THIS ONE MAN’S VISION!?

END_OF_DOCUMENT_TOKEN_TO_BE_REPLACED 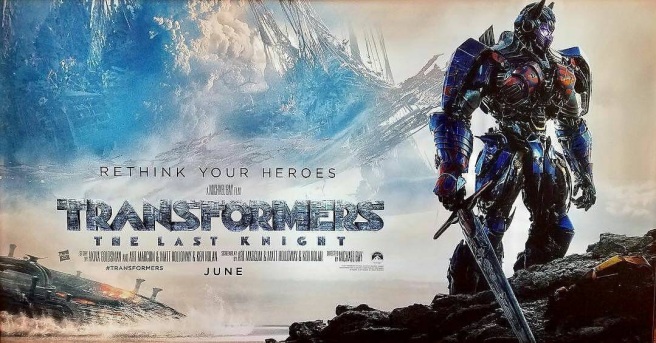 Transformers: The Last Knight and all the images you see in this review are owned by Paramount Pictures

Good ol’ Patron Saint of all things wrong with cinema, Michael “The Boom Master” Bay!  For a lot of film critics, he’s become something of a symbol for the worst that summer blockbusters have become even if that characterization is somewhat unfair.  Heck, even I’m guilty of generalizing the dude to an extent as I’ve only managed to sit all the way through two of the Transformers movies (Revenge of the Fallen and Age of Extinction; neither of which were the least bit tolerable) and I do genuinely like a few of his films such as Pain and Gain as well as The Rock.  This is gonna be the first film of his that I will review for the site, so I don’t just want to parrot my usual talking points about Transformers being THE WORST THING EVAR (even if it’s probably true) and am gonna try to go into this with an open mind as well as a critical eye.  Is there SOMETHING in this latest entry of the series that will be worth talking about and even appreciating, or are here to say the same shit for a franchise that makes too much money to ever need to change?  Let’s find out!!

The movie begins with Optimus Prime (Peter Cullen) landing back on Cybertron (I think) where he meets the creator of all Transformers (I think) known as Quintessa (Gemma Chan) who… wants to destroy Earth I think?  I don’t know, but that’s where we start and we’ll get back to that eventually.  From there, we find out that the humans no longer trust the Transformers (again) and have set up the Transformers Reaction Force (TRF) to hunt down any remaining Autobots and Decepticons which usually isn’t a great idea, but whatever.  The few remaining Autobots from the last movie (including a few Dinobots) are being protected by Cade Yeager from Age of Extinction (Mark Whalberg) who’s now a fugitive from the law despite having a very visible base of operations in a junk yard.  Anyway, he’s being chased by the humans as well as Megatron (Frank Welker) but during an admittedly decent action scene where the three factions come to a head, a strange human sized robot named Cogman (Jim Carter) informs Cade that an artifact he found holds the key to saving the world or whatever and jets him off to the UK along with Bumblebee (Erik Aadahl) to meet with his master Sir Edmund Burton (Anthony Hopkins).  The dude informs Cade that he’s got a destiny much bigger than his own, there’s a professor named Viviane Wembly (Laura Haddock) who ALSO has a destiny much bigger than her own, and there’s a Cybertron MacGuffin somewhere that they need to find in order to fight off the impending doom brought about by Quintessa and a brainwashed Optimus Prime.  Can Cade and his gang of rascally robot friend find the MacGuffin of Ultimate Destiny before it’s too late?  Can Optimus Prime be brought back to his senses before he does something he’ll truly regret?  WHY IS IT So HARD TO DESCRIBE THE PLOT TO A MOVIE ABOUT GIANT ROBOTS!?

END_OF_DOCUMENT_TOKEN_TO_BE_REPLACED 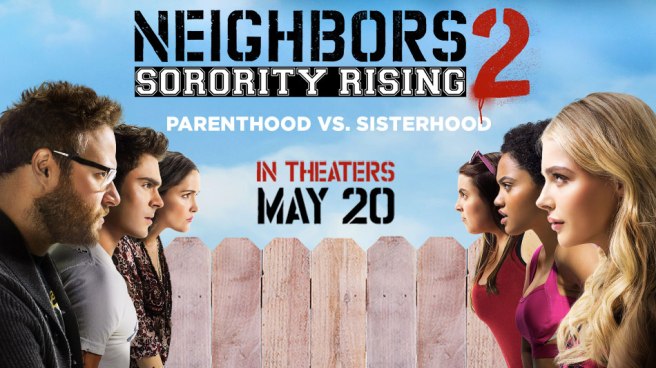 Neighbors 2: Sorority Rising and all the images you see in this review are owned by Universal Pictures

They just couldn’t resist the urge, could they?  I guess there was just too much money lying on the table to NOT make another one of these.  Sequels to unexpected hits (especially comedies) are almost always underwhelming as it’s like trying to capture lightening in a bottle twice.  Caddyshack 2, Ghostbusters 2, Horrible Bosses 2, you could make a neigh infinite list of them.  Now the first film was a pretty solid movie that had a bit more to it than you would expect from a movie that’s essentially a prank war.  Not only that, but they’re coming into this one with a decent enough idea in regards to how Sororities are viewed by the education system, even if it is a bit ridiculous that the SAME THING happens to these people twice in a row.  Can this manage to be the few comedy sequels to NOT be the worst thing imaginable, or is this movie destined to be the worst thing imaginable?  Let’s find out!!

The movie begins a few years after the first one ended with Teddy Sanders (Zac Efron) still wasting his life away but now doing so as Pete’s roommate (Dave Franco) and Mac and Kelly Radner (Seth Rogen and Rose Byrne) planning to sell their house so that they can move to the suburb.  There’s a small roadblock though to their plan which is that they ALREADY bought the house in the suburb, but the house they just sold is in escrow which the movie thankfully explains is a thirty day waiting period where the buyers can back out of the deal if something were to change.  That couldn’t POSSIBLY happen though, right?  Well back on the college campus (what college is it anyway?) the new female freshmen are trying to get into Sorrorities, but three of them (Chloë Grace Moretz, Kiersey Clemons, and Beanie Feldstein) find the guidelines about not being able to party too restrictive, so they decide to start their own independent Sorority.  Well SURELY they won’t end up at the EXACT same house that Teddy’s frat was at, right?  Well speaking of Teddy, Pete just got engaged so Teddy has to move out which means he’s lost once again and needs to find not only a new place to stay, but some meaning in his life.  Oh look!  The house he used to live at!  And look!  The girls are touring it to see if it works for their needs!  An unholy (and tenuous) alliance is born between the girls of the new Sorority (Kappa Nu) and the frat boy looking to relive his glory day, so they rent out the house to the terror of Mac and Kelly who just want to sell their place and move on with their lives.  And so the war is on once again as the girls refuse to keep things quite for thirty days and the old people try to keep them from exercising their right to party!  Can Mac and Kelly once again destroy the young people who are trying to fuck up their lives?  Will the sisters fail in their endeavor to bring about a new kind of Sorority that’s empowering those who want to have fun but don’t want to be objectified?  Things can’t get any crazier here than they did in the LAST movie… right?