Directed by Will Speck and Josh Gordon

Christmas themed comedies for the most part (at least the ones that aren’t made for TV) have a pretty solid track record with classics like Elf, Bad Santa, Home Alone, Christmas Vacation, and A Christmas movies among their prestigious ranks.  I would also include How the Grinch Stole Christmas (the Ron Howard one) and even Jingle All the Way among those, but I tend to be in the minority with that particular opinion so we’ll save those arguments for another time.  The point is that there’s a certain sense of… shall we say EFFORT that comes to be expected when trying to cash in on the holidays; even if the goal is to make it raunchy like they did with A Very Harold and Kumar Christmas (another classic) which seems to be the intent here as this movie seems to be a mix between Project X, The Hangover, and the first ten minutes of Die Hard before the terrorist took over the Nakatomi building.  Does this wild party live up to the standards of excellence we expect from Christmas films, or is this just a lazy cash in that just so happened to wrangle in a whole bunch of popular comedians to do a whole bunch of lazy material before collecting their Christmas bonuses?  Let’s find out!!

Our story begins at the Chicago branch of Zenotek which sells servers or something like that where we meet our key characters for the shenanigan fueled debauchery that will unfold in due time.  We’ve got Josh (Jason Bateman) who’s basically if Jason Bateman worked at a branch of a tech company, Clay (TJ Miller) who’s basically if TJ Miller was in charge of said branch of a tech company, Mary (Kate McKinnon) who is what you’d imagine Kate McKinnon would do as a caricature of the head of human resources at said branch of a tech company, and a bunch of others played by Sam Richardson, Vanessa Bayer, Karan Soni, Randall Park, and Rob Corddry to fill out this scenario where a branch of a tech company as filled entirely by smart asses and awkward comedians.  Oh, and Olivia Munn is in here too as the uber savvy hacker Tracey to be Josh’s love interest and to provide the very obvious Chekov’s Gun for the finale.  Anyway, while we’re getting introduced to all these employees at Zenotech and setting up the boring typical Christmas Party, The CEO of the company Carol (Jennifer Aniston) who also happens to be Clay’s sister has informed them that the branch is about to get some HEAVY cuts and that the party is cancelled.  Well that certainly sucks!  If only there was a way to fix both problems at the same time…  Oh wait!  There’s a big contract up for grabs and the company’s representative is in town (Courtney B Vance) so maybe they can woo him into signing a contract with the BEST CHRISTMAS PARTY EVAR, giving their employees the great time they deserve and saving the branch in the process.  It could work, right?

END_OF_DOCUMENT_TOKEN_TO_BE_REPLACED 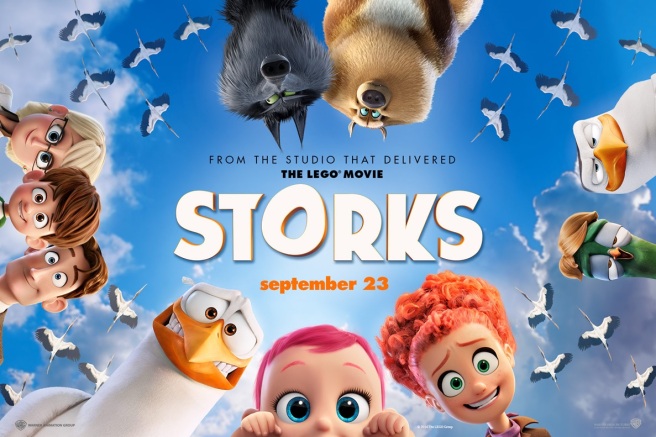 Is this just the year of animated bird movies!?  First we have Angry Birds, now we have Storks… okay, it’s just two movies, but that still seems like too many!  I really didn’t know anything about this movie walking in, having only hear the title and maybe seen a poster, which is odd considering that this isn’t some straight to DVD crap from an unknown studio.  Maybe Warner Bros was keeping this one close to the chest, or maybe I’ve just been living under a rock this whole time.  Anyway, is this the follow-up to the LEGO movie that they’re hoping will prove their viability as an animation studio, or will this prove the Phil Lord and Chris Miller in the director’s chair was the only reason that was a success in the first place?  Let’s find out!!

The movie is set in a world where at one time (presumably throughout all of humanity’s existence up until a few years ago) Storks would receive letters from humans and then… I guess use those letters to create a fetus in some sort of machine that grows them to term in a matter of minutes.  It’s not clear how much control the parents have when deciding what kind of baby they want (no gay kids in MY family!) but regardless, the babies that are crafted in this ungodly mechanism are then delivered by the Storks all around the world.  At some point though, I guess the humans learned how to fuck which made the Storks rather redundant, so they decided to switch their operation from baby growing and delivery to basically become Amazon.  Okay… I have several questions about all of this already, but we should probably move on from there.  So when the movie picks up (which can only be about twenty years after they stopped delivering babies), the best Stork deliverer in the business Junior (Andy Samberg) is up for a management position as the current manager Hunter (Kelsey Grammer) is apparently going to the BOARD OF DIRECTORS or something… even though we never see anyone higher than Hunter in the company structure.  For Junior to get his new job though, he has to do one thing; fire Tulip.  Who is Tulip?  Sigh… okay, rewind a bit.  Apparently right before the Storks stopped delivering babies (maybe this was an inciting incident?) one Stork lost his damn mind after seeing how CUUUUUUTE his baby was and broke the baby’s personalized tracking thingy… which is some sort of GPS device that tells them where the baby goes… and it’s the only copy of that information… so the baby is an orphan now and the stork in question flies off AND IS NEVER SEEN AGAIN!  That baby is now eighteen (i.e. they’ve only stopped delivering babies for less than a generation) and FOR SOME REASON wasn’t brought to a human orphanage, but has instead been bumming around the packing facility this entire time doing odd jobs for the company.  To make a long story short; shenanigans happen, Junior and Tulip accidently make a baby with the decommissioned baby-maker (don’t ask), and they have to deliver it before anyone finds out what the hell he did and he loses his job.  For some reason Hunter wants to stop them rather than help them cover it up (does he WANT Junior to be in charge, or not!?), and of course we have to cut back to the kid who sent the letter wishing for a little brother (he’s gonna get a little sister instead, so maybe the human’s DON’T have that much control over what baby they get) and his issues with his parents being gainfully employed.   You ever get the feeling that the writers didn’t actually think anything through when they were writing a script?

END_OF_DOCUMENT_TOKEN_TO_BE_REPLACED

Seriously.  It’s not funny anymore Garry Marshall.  Whoever’s paying you to do this or whoever has your family hostage NEEDS to be stopped.  For the third time in a damn row, Garry Marshall is trying to rip off Love Actually by taking the formula and centering on other holidays that seem to be chosen at random.  I wouldn’t be surprised if the next movie is about Arbor Day and Julia Roberts plays a tree in it!  So is this one just as bad as the rest?  Yes.  Yes it is.  No point in giving you false hope.  Let’s just get this one over with…

The movie is separated into four stories.  Jennifer Aniston has to deal with the fact that her ex-husband has remarried a much younger woman and they are both dazzeling the kids with fun trips, junk food, and rock concerts while she’s at her house doing everything else for them.  Jason Sudeikis is a widower whose wife passed away about a year ago and he’s still dealing with the grief while trying to raise his two daughters.  Britt Robertson is a woman who’s raising her infant daughter with her boyfriend, but she also has her own demons to work out as she has never met her birth mother who is an HSN host played by Julia Roberts.  And finally, KKate Hudson and Sarah Chalke play sisters who have married people their parents would not approve of (an indian man played by Aasif Mandvi for the former and another woman played by Cameron Esposito for the latter) and they are no longer able to hide this fact from them since they have made a surprise visit.  Each of these stories are loosely connected by the fact that some of the characters know each other as either friends or in a professional sense, and we follow our heroes as they learn to get over their problems, make up for mistakes they’ve made, and become better people in the process.  Oh and there’s a holiday in here… I guess.